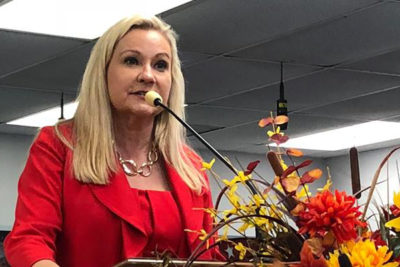 The Virginia Senate passed legislation this week that would allow firefighters and emergency medical personnel to carry concealed firearms, provided they have obtained a concealed-carry permit and been given permission from the fire chief or emergency medical services chief.

The bill’s sponsor, Sen. Amanda F. Chase, argued that emergency personnel are often called to the scene of a volatile situation where law enforcement has not yet arrived, especially in more rural areas. As the mother of an EMT, she said that emergency responders might need to defend themselves.

Led by Democrat Sen. Jeremy S. McPike, opponents argued that allowing emergency personnel to be armed without training would pose a danger and create legal liability.

The freshman Sen. Chase already made a splash this legislative session when she appeared on the chamber floor with a .38 Special on her hip. While quite a few Virginia legislators carry firearms on the chamber floor, most do not carry openly. Chase argued that openly carrying a firearm provides a deterrent to unwanted advances.

Usually Chase carries concealed because she doesn’t want to alarm her colleagues.

“I respect that it may raise an eyebrow with people, so I always conceal-carry,” Chase told the Washington Post. “I don’t want to raise an alarm for other people.”

Chase first decided to carry openly after one of her colleagues, Sen. Richard H. Black, was accosted by immigration activists who were angry after he presented a bill to ban sanctuary cities.

“It concerned me,” she said of the incident with Black. “I’ve had threats. I’ve had stalkers since I’ve been in the General Assembly. I am going to continue to represent the issues that are important to my constituents, and I’m not going to be intimidated by people who would try to physically harm me.”

The senator said that many of her colleagues have given her a “positive reception,” some of them calling her a “badass.”

“If she gets in an argument, what’s she gonna [do], pull out a gun and shoot them?” he said. “I just think it’s absurd.”

Chase’s EMT bill passed on a narrow party-line vote (21-19) and now heads to the House, where a similar measure was defeated by the Republican-controlled chamber. Virginia’s governor is an anti-gun Democrat, Ralph Northam.