Why Girls Need Guns: Teaching My 12-Year-Old Daughter to Shoot 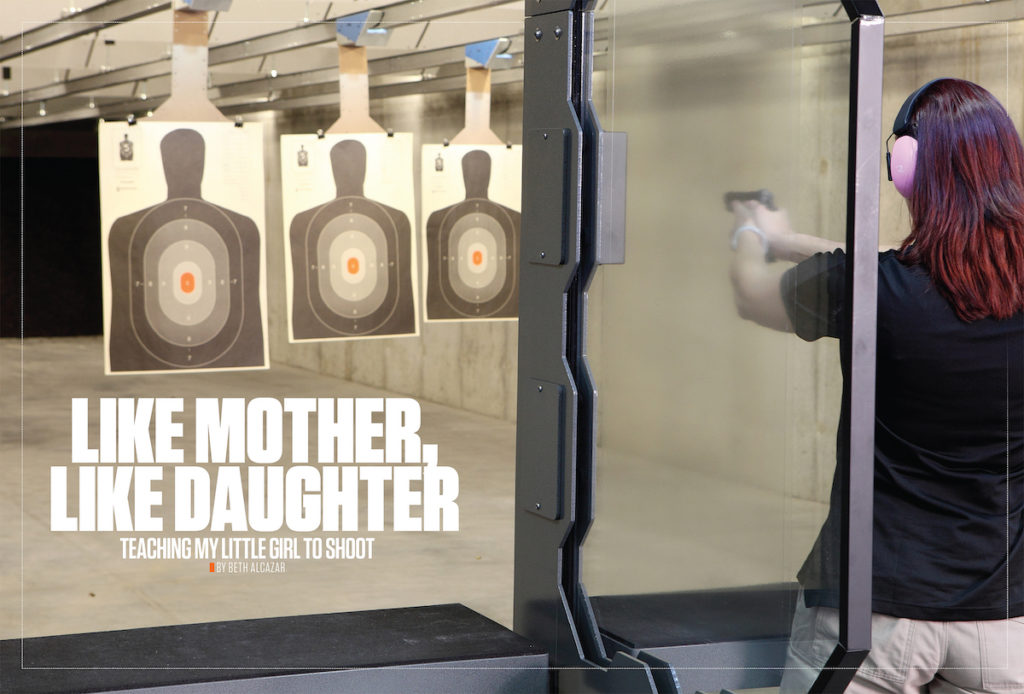 Editor’s Note: The following is a syndicated article by author Beth Alcazar that first appeared in USCCA’s Concealed Carry Magazine Volume 12, Issue 3, April 2015 under the title, “Like Mother Like Daughter: Teaching My Little Girl to Shoot.”

My palms were sweating, and I felt a little queasy as the metallic door to the indoor firing range at Hoover Tactical Firearms closed behind me. I walked up to the assigned lane — Lane No. 3 — and I set down my equipment. I heard several shots on both sides of me, and my heart started racing. I took a deep breath and willed myself to keep going, not walk out, not call it quits … not when I was this close.

As I prepared my firearms for shooting and stood at the firing line, my mind was reeling, wondering if I’d forgotten something or if I’d done anything wrong. I went over the safety rules in my head, trying to reassure myself that all would be well. I took another deep breath. I quickly glanced around at the other shooters and tried to capture the moment in my brain. After all, it’s not every day that someone takes her very first shot.

From all the anxiety and excitement that was pulsing through my body, you would’ve thought that this was MY first time shooting. But it wasn’t. It was my 12-year-old daughter’s. And I was clearly a pleased, nervous, proud and blessed mom relishing in the opportunity to teach my child about responsible gun ownership and to be right by her side when she took her first shot.

When I was growing up, it would have been a bit odd to friends and family if I’d been out at the shooting range with my parents. That just wasn’t the norm, especially for me, growing up in a home without firearms. My mom and dad didn’t own guns or know anything about them, for that matter. I never even held a gun until my senior year in high school, when my boyfriend at the time thought it would be fun for me to learn how to shoot. I didn’t touch a gun again until about seven years later and didn’t get my permit to carry a firearm for almost another 20.

Fortunately, girls and guns aren’t such a rarity these days. Especially here in the South, I see moms and dads taking their daughters outdoors all the time, teaching them how to hunt and fish and how to enjoy and appreciate the outdoors. And in addition to participating in things like martial arts or team sports, more females are adding the still-male-dominated shooting sports to their list of hobbies, interests and accomplishments.

Of course, whether or not a girl participates in shooting competitions or grows up and decides to own a firearm and/or to carry concealed, I firmly believe that every female needs to learn how to shoot, just as much as any guy, if not more so.

Since females are more often the targets of domestic abuse and violent crimes, girls should be taught from a young age how to defend themselves. And they should be taught to be proud of their Second Amendment rights.

When to Teach Children

Of course, teaching young people about firearms can be a touchy subject. The most important aspect is safety for everyone involved. And I believe that all children should learn about guns, starting as soon as possible. This doesn’t mean that children should be handling guns or shooting when they’re little, but they should be exposed to the safety rules, repeatedly, just as if you were teaching them not to touch the hot stove, not to run across the street without looking carefully or not to talk to strangers.

Gun safety needs to be an everyday, normal conversation — for boys and girls — so when young children are old enough, they will be ready to learn and develop their shooting skills and join the growing number of responsibly armed Americans.

The period when a child is actually ready to learn how to shoot is another in-depth conversation. Different children will be ready at very different times based on a variety of factors. What’s right for one might not be right for another. Each family needs to carefully consider their children’s ages, attitudes, physical abilities, aptitudes, interests, maturity levels and cognitive decision-making skills. There’s much more to it than simply saying, “OK, my daughter is 8 years old. She is ready to shoot now.” Don’t be afraid to really ask yourself if she is responsible enough. And don’t be afraid to ask your children their thoughts as well.

Personally, I felt like my daughter was ready when she had matured socially and emotionally, could appreciate and handle instruction with grace, actually showed a genuine interest in firearms and had gotten over some of that tween awkwardness that comes with growth spurts, hormones, body changes and insecurity. All of these happened to come into alignment right around the time of her 12th birthday, so for us, we knew it was a good time to move beyond the basic rules and actually teach her how to shoot.

How to Teach Children

Anyone who has taught others how to safely use firearms knows that this is a big responsibility. Our three children go over the gun safety rules repeatedly in our household. And my husband and I are careful to model responsible gun ownership as well. It’s one thing to say it; it’s another thing to live it, day in and day out, no matter what. Those little ears are listening, and those eyes are watching, even when you think they aren’t.

When we felt our daughter was ready to learn how to shoot, I actually made her sit through one of the USCCA courses I taught. Granted, some of the information was probably beyond her level of comprehension, but I wanted to give her the opportunity to learn about situational awareness and personal safety, along with the basics of how a gun works and how she should properly hold it, aim it and shoot it. We also worked on stance and grip and practiced with unloaded firearms, so she could get the feel down and be comfortable before even setting foot on the range.

When we arrived at our local indoor range for the big day, my husband asked, “So, are you nervous?” I replied, “Yes,” before realizing that he was not addressing me. My daughter chimed in, announcing that she was not nervous, just excited. But I made her say the safety rules again out loud before we headed inside. More than once, I asked her if she had any questions. Too many times, I reminded her what to expect when we got into the range. And repeatedly, I checked her eye and ear protection. Finally, we paused for one quick picture, and then we went inside.

It was an honor to watch my daughter carefully take the .22 revolver in her hands, line up the sights and pull the trigger. I only loaded one round that first time, but you could tell by the look of joy on her face that she wasn’t ready to stop there. Since we’d gone over how to load the gun many times, I watched her do it this second time. She had the odd wobbles and fidgets of a beginner, but she was careful to follow the safety rules with the muzzle pointed toward the target in a safe direction and her finger off the trigger. Again, she gripped the revolver, lined up the sights and shot at that hot-pink target in front of her, smiling as the bullets punched through dotting the paper.

Undoubtedly, being at the range with my eldest daughter was an incredible feeling. But I know that I won’t always be able to be there by her side. I won’t always be around to guide her, help her or protect her. She’ll be on her own one day all too soon. And that’s exactly why I teach my daughter how to be a responsible gun owner and why this won’t be our last trip to the shooting range together.