If anti-gunners thought they scored a major victory this week when a federal judge in Seattle extended an injunction blocking Cody Wilson from giving away gun files online, they thought wrong.

In a 46-minute press conference on Tuesday (see video below) Wilson explained how that putative victory was, in reality, the exact opposite. Another huge blow to the gun-banning agenda.

What one needs to understand is that the injunction does not stop Wilson, nor his company Defense Distributed, from disseminating gun blueprints to the masses. It only stops him from making them public online free of charge. That’s right folks, Wilson cannot give them away under the order but he can sell them to any user at a “Name Your Price” cost — even if that cost is zero dollars — so long as those digital files are directly transferred to the purchaser.

To understand this one just needs to consult the closing paragraphs of the 25-page order penned by U.S. District Judge Robert S. Lasnik that read in part:

The Court declines to wade through these issues based on the limited record before it and instead presumes that the private defendants have a First Amendment right to disseminate the CAD files. That right is currently abridged, but it has not been abrogated. Regulation under the AECA [Arms Export Control Act] means that the files cannot be uploaded to the internet, but they can be emailed, mailed, securely transmitted, or otherwise published within the United States.

Okay, quick aside. Judge Lasnik openly admits to violating Wilson’s First Amendment rights!!! He says, and I quote, “That right is currently abridged…” Duh! Has Lasnik never read the text of the First Amendment which clearly reads, “Congress shall make no law… abridging the freedom of speech.” Needless to say, that’s not going to go over well when this case, upon appeal, heads to the Ninth Circuit. Can you say, unconstitutional!

Anyways, the more immediate takeaway is that files “cannot be uploaded to the internet, but they can be emailed, mailed, securely transmitted, or otherwise published within the United States.” In telling Cody what he could no longer do, Lasnik also told him what he could do moving forward. This gave Wilson the green light to launch, what he affectionately dubbed, “Operation Integral Accident*.” The sales-based model for the delivery of his repository of secured files.

“I’m happy to become the iTunes of Downloadable guns, if I can’t be the Napster,” quipped Wilson, during the press conference in Austin, TX.

Anti-gunners must be reeling from this news. Not only have they failed to stop Wilson, but they’ve forced him to monetize his operation. Defense Distributed is now getting paid for a service it was willing to provide for free!

“All that’s happened here as a result of this judge’s order is perhaps a doubling or tripling of the valuation of my own company, of our economic power and our ability to deliver files to these people,” he said.

Now, as noted, because of the “Name Your Price” aspect to the site, users can still pay nothing for the files.  Except for shipping which runs $7 flat-rate if you opt to purchase files on a USB drive.  But, even with the “Name Your Price” component, it appears that purchasers are more than happy to donate to the cause. DEFCAD.com, the online library operated by Defense Distributed, has raised over $200,000 in just one week. And so far more than 25,000 files have been downloaded.  Wilson is also encouraging third-party contributors to sell their files on DEFCAD to earn a 50/50 split of the proceeds.

What’s ironic is that in their hysterical quest to stop Cody the anti-gunners and their lapdog media pals put a spotlight on this issue which only served to create more hype and interest, and thus more downloaded gun files. One website, CodeIsFreeSpeeh.com, claims that as many as 1.5 million were downloaded last month alone. Maybe they never learned what happened to alcohol consumption under Prohibition but they should’ve recalled what happened to black rifle sales during Obama’s tenure or even more recently bump stock purchases under Trump. Forbidden fruit always gets eaten.

It’s not all good news, however. The injunction doesn’t just ban Defense Distributed from freely sharing files online but everyone. At its core, this is an assault on our First Amendment rights to the nth degree. I mean, what would these gun-grabbers say if the government suddenly blocked religious groups from posting scripture online? Would they be alright with that?

“The only thing that’s being stopped and injured as these lawsuits proceed is your right to speak, to put things on the Internet,” said Wilson.

It should also be noted that not everyone is free to join the DEFCAD community.  I tried to but because I live in New York, I received the following message: 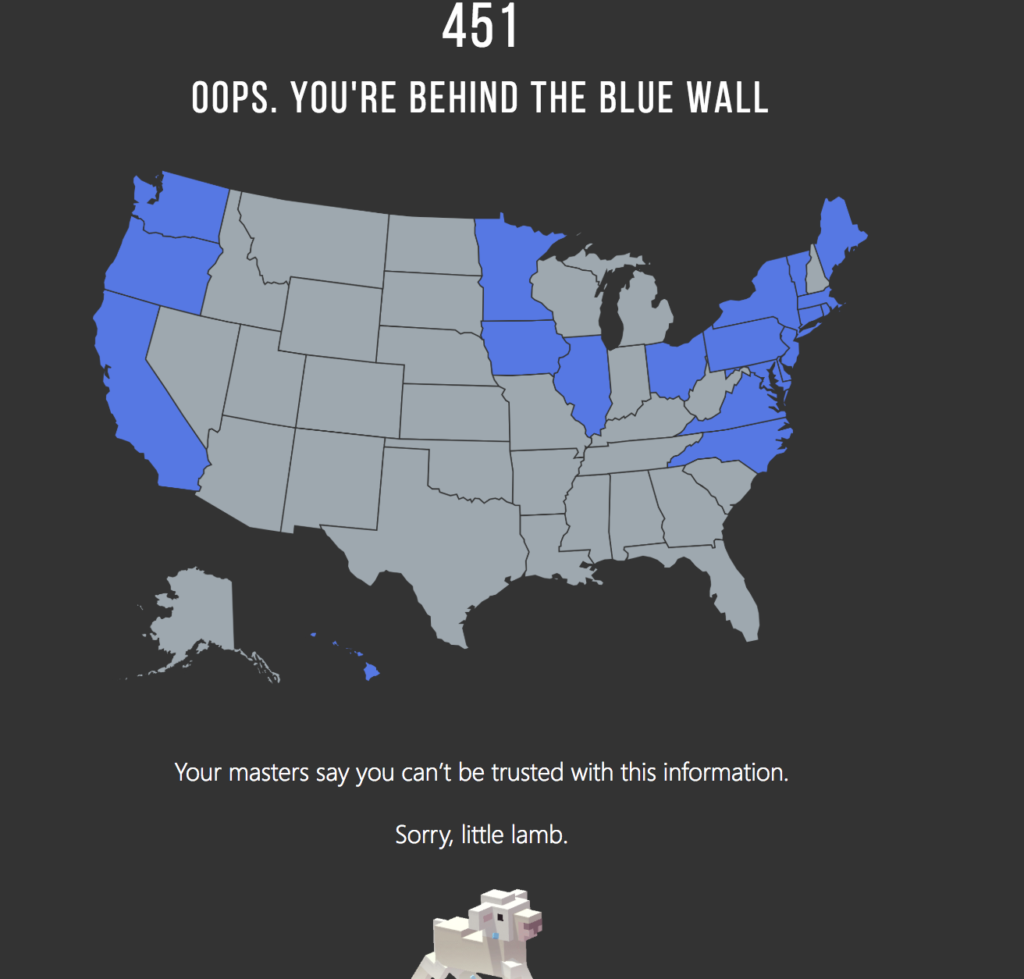 My state government, along with a dozen or so others, decided that the material on DEFCAD wasn’t something I should be privy to even though it’s FREE SPEECH.  Mind you I can find it elsewhere online and there’s nothing stopping me from going to a competing site and downloading it.  But it’s the principle.  It’s an infringement on our Constitutional rights!  These overlords are engaging in modern-day book burning in the hope that it’ll spell the end of Cody Wilson and the downloadable gun.  Joke’s on them, though.  There’s no putting this genie back in the bottle.  And the more they try, the more they will fail.

Next post: Korwin: How to Manipulate a Gun Poll