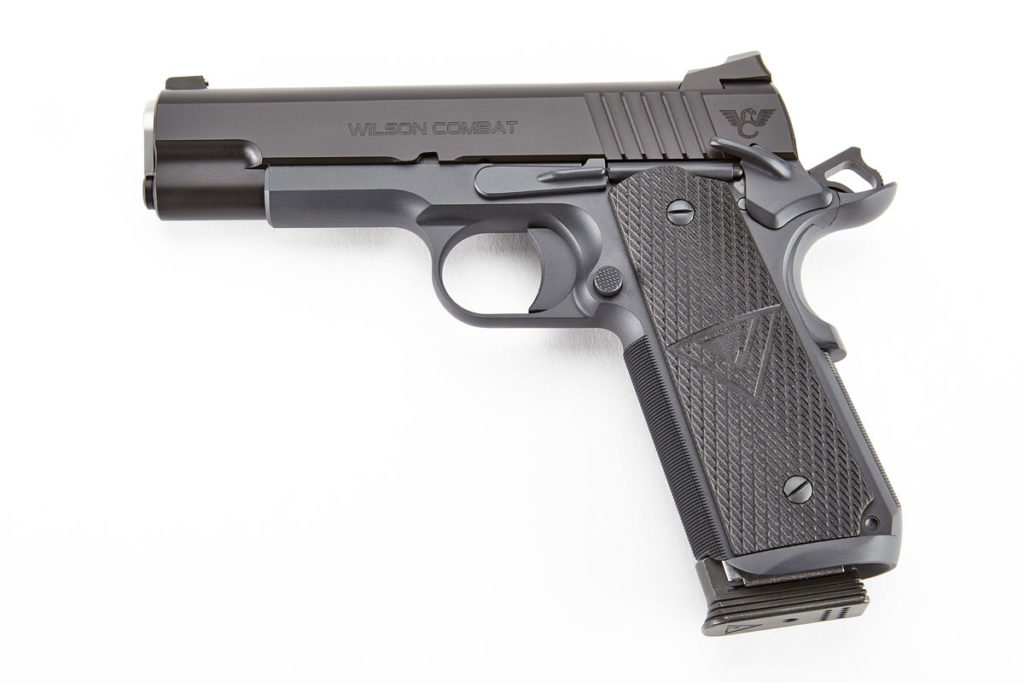 It’s not often that I get a chance to sit down and spend a day and a half with three industry legends. Earlier this year, I found myself at Bill Wilson’s Texas ranch, sitting at the dinner table with Bill, Ken Hackathorn, and Larry Vickers. Some would say I was in the presence of 1911 royalty. Certainly, all three have been extremely influential in the firearms industry, and specifically the 1911 industry. The three men have been close friends for many years and, sitting around the table listening to war stories, it was a memorable occasion.

Larry’s bio and background are well-known in the industry. He was one of the early members of Delta and participated in Operation Acid Gambit, the rescue mission in Panama to free Kurt Muse. Larry went on to be a consultant to Heckler & Koch during the development of the HK 416 and later founded his own company, Vickers Tactical. He has worked with Wilson Combat, Tango Down, and other companies to develop products and accessories, and has published a great series of historical books. Larry, like Bill and Ken, is a walking encyclopedia of firearms history, design, and use. Sitting at the dinner table listening to the discussion, I felt like I was in a Masters level program. One other note: I highly recommend Larry’s “coffee table books,” especially his first one on the 1911.

In the past, both Larry and Ken have worked with Wilson Combat to develop a series of signature pistols.  In both bases, the series started with pistols in a Government Model configuration. Both the Vickers Elite and Hackathorn Special reflect the preferences of each of these pistoleros and, not surprisingly, they share many of the same features. The Government Model guns were so successful that Wilson recently introduced a Commander version of both the Hackathorn Special and the Vickers Elite.

I was fortunate to obtain one of the new Vickers Elite Commanders shortly after they were introduced.  Unzipping the gray Wilson Combat pistol case, I found an “all business” fighting pistol reflecting Larry’s personal tastes that are based on years of experience. As much as I hate clichés, I feel the need to use one here: The Vickers Elite has everything you need and nothing that you don’t. It is a well-thought-out pistol with a functional need for each feature. Our test pistol was chambered in 9mm and represents a growing trend of 1911s chambered in that caliber. 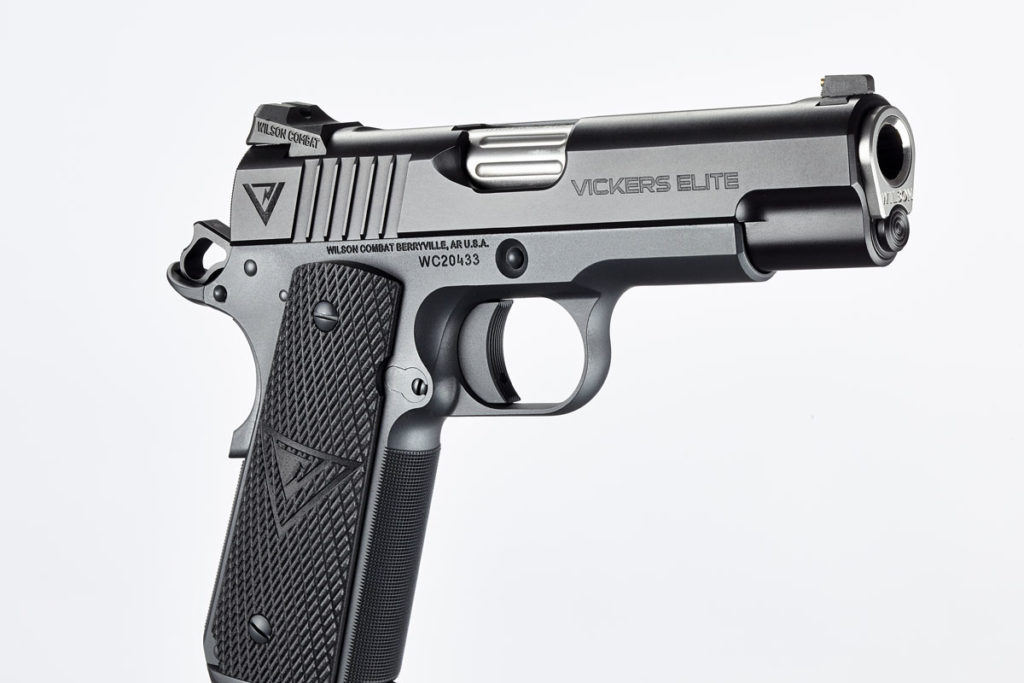 The Vickers Elite Commander is rich with features. Starting with the slide, the Vickers Elite features wider cocking serrations than are found on the standard Wilson slides. The rear sight is a fixed Wilson Battlesight with a “U” notch, while the front sight features a gold bead insert. The rear of the slide has 40 LPI serrations that match the face of the rear sight and there are 30 LPI serrations on the top of the slide.  A fully ramped, 4.25”, match barrel features a fluted chamber and is precisely fitted with a thick flange bushing. The barrel is flush cut with a deep reverse crown that both protects the muzzle and is esthetically pleasing. Ball end mill cuts and a heavy chamfer on the bottom of the slide are also standard on the Vickers Elite. The slide was finished in a matte black Armor-Tuff finish. 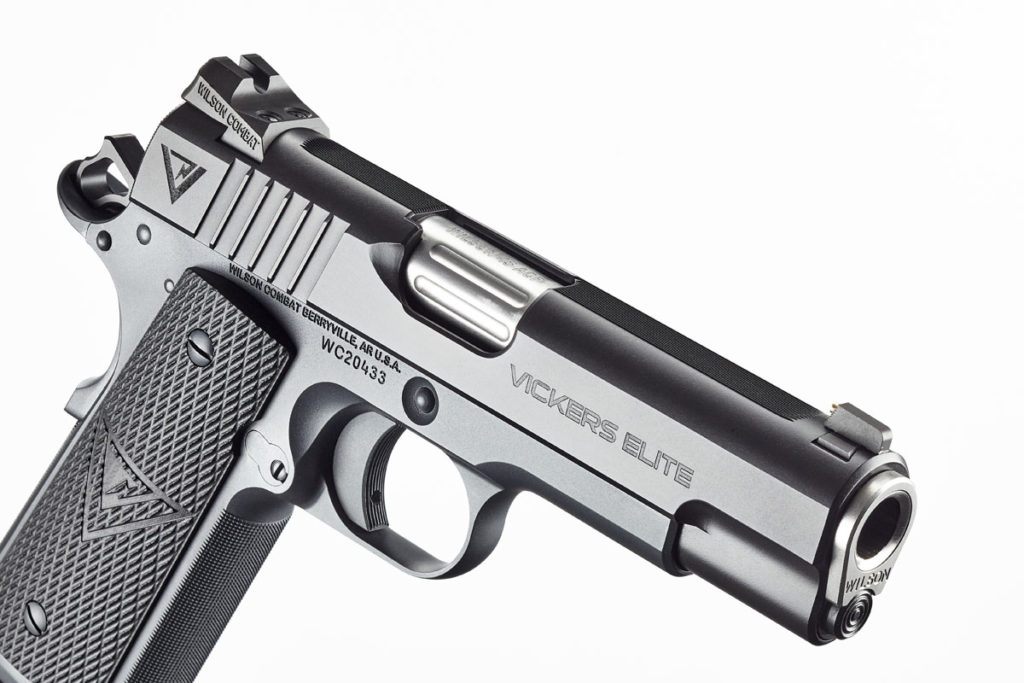 The slide is equipped with Wilson’s “U” notch Battlesight and a gold bead front sight.  Ball end mill cuts, serrations, and unique cocking serrations are standard on this model. 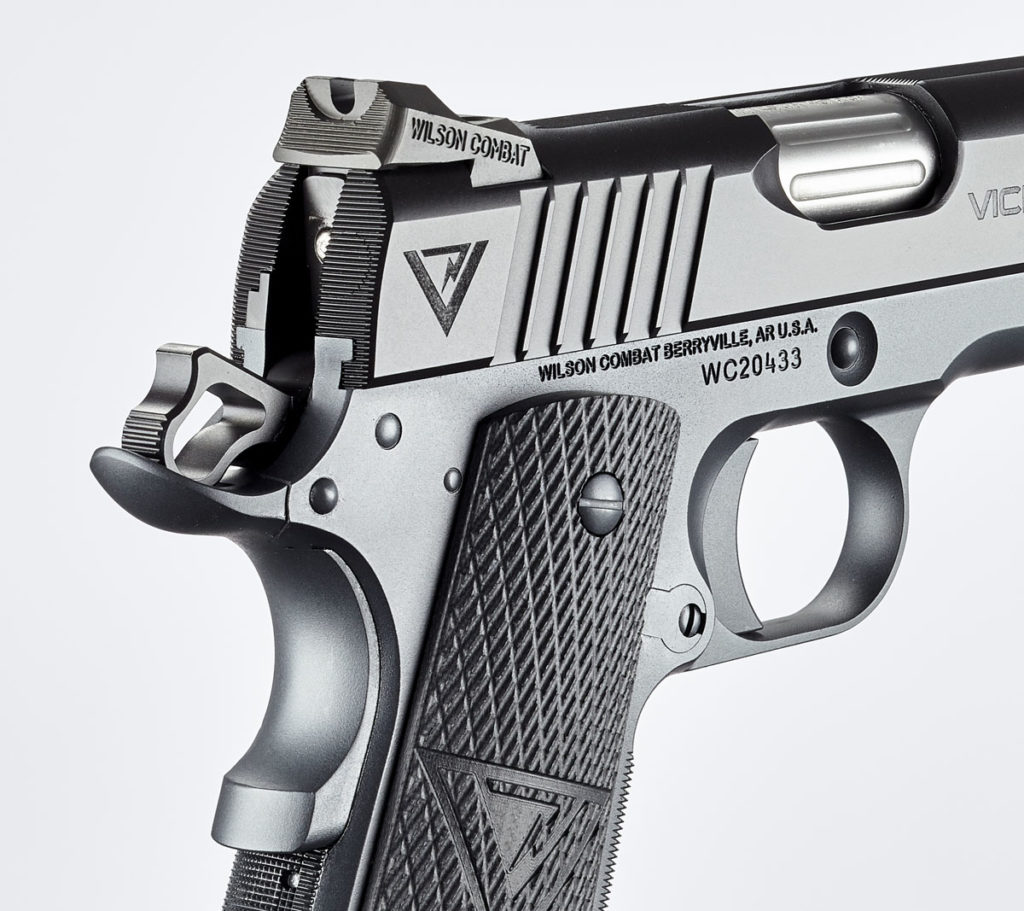 The Vickers Elite Commander features Wilson’s beavertail grip safety, Battlesights, and wider cocking serrations.  The Vickers logo is engraved on the right side of the slide. 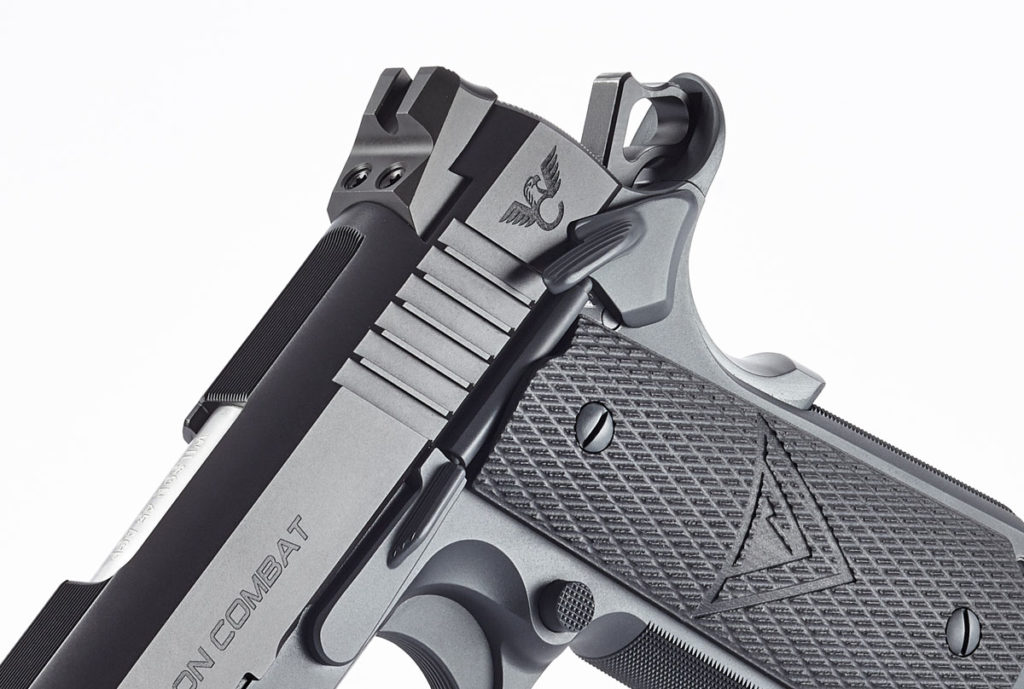 Front Sight Bushing The match grade, 4.25” bushing features a recessed crown while the bushing is beveled and contoured.

The Vickers Elite Commander is based on a full size, carbon steel frame that features a high cut front strap with 30 LIP checkering. The bobbed high-ride, bulletproof grip safety, combined with the front strap allows for a high purchase on the grip. The operating controls are Wilson’s Tactical Bullet Proof® Thumb Safety, magazine release, and countersunk slide stop. The round butt magazine well is evenly fitted and blended, giving the user a wide mouth for rapid reloads. In keeping with Larry’s preference, the Vickers Elite comes with a solid, medium length trigger, and a single side thumb safety. The slide is marked with the Wilson Combat logo on the left side and the Vickers Elite on the right side. Finally, a custom set of checkered G-10 stocks has the Vickers Elite logo laser engraved. Our frame featured a gray Armor-Tuff finish but OD green is also available. The pistol comes standard with two 1911 Elite Tactical, 10-round magazines with the excellent ETM base pad.

Both the thumb safety and slide stop are designed with a low profile for concealed carry. 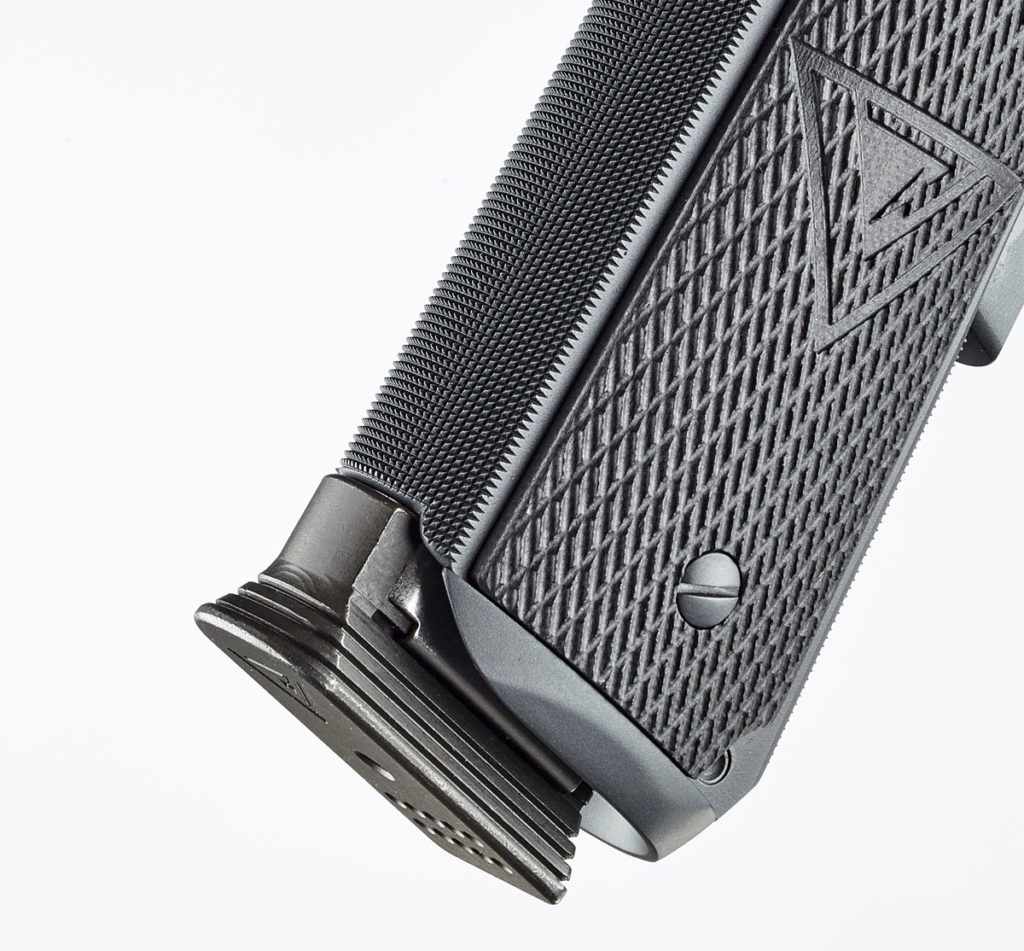 Wilson Combat has one of the cleanest and sleekest magazine wells in the industry.

I have long been a fan of the Commander length 1911 and consider it ideal for concealed carry due to the shorter slide and lighter weight. The reason I mention the shorter slide is that it facilitates an easier presentation from concealment.  After ordering the pistol, I contacted Raven Concealment Systems and ordered a Vickers Signature Series holster and magazine carrier. The holster is similar to the old Raven Phantom but has a reduced profile. Both the holster and magazine carrier feature Raven’s Quick Mount Snap belt loops for easy on/easy off mounting.  These loops also bring the holster closer to the body. The holster is two-tone with the front being Ranger Green and the back being Coyote Brown. The Vickers Tactical logo is laser etched on the front of the holster and mag carrier. Raven Concealment offers the Vickers Signature Series for Larry’s go-to gun, the Glock 17/19, H&K VP9, Beretta M-9, and the 1911. 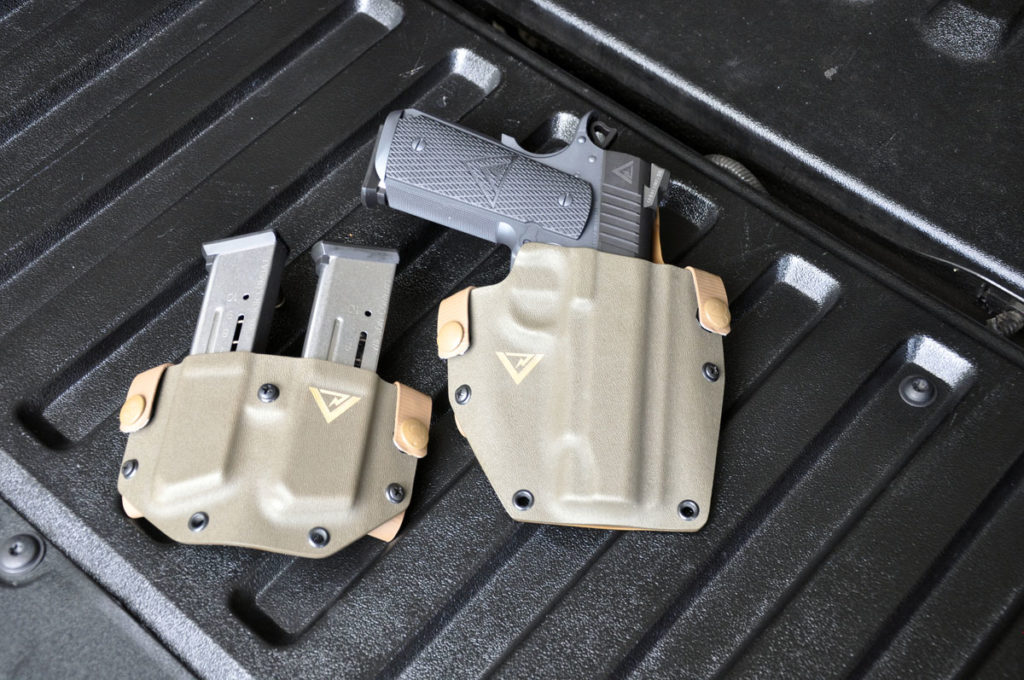 Raven Concealment Gear offers a special Vickers model for the 1911 Government and Commander models, the Beretta 92, and the Glock.  Raven gear is the choice of the author for everyday carry.

Over the past several years, Wilson has become very active in the ammunition market with both match ammunition and a line of personal defense ammunition. They provided me with three of their most popular personal defense loads. The first is the Pinnacle 95 gr. +P Barnes TAC-XP load. As with other Barnes TAC-XP bullets, this load features a 100%, solid copper, projectile that provides outstanding terminal ballistics while retaining the original bullet weight and providing consistent penetration. Not surprisingly, this load was the fastest of the loads tested, averaging 1237 fps. The second load was a Pinnacle 115 gr. +P TAC-XP load that averaged 1042 fps. The final load we shot was 124 gr. XTP (Hornady extreme Terminal Performance) bullet, that averaged 1134. We also shot some of Wilson’s excellent 115 gr. HAP Match ammo. As reflected in the accompanying chart, this load proved to be the most accurate. 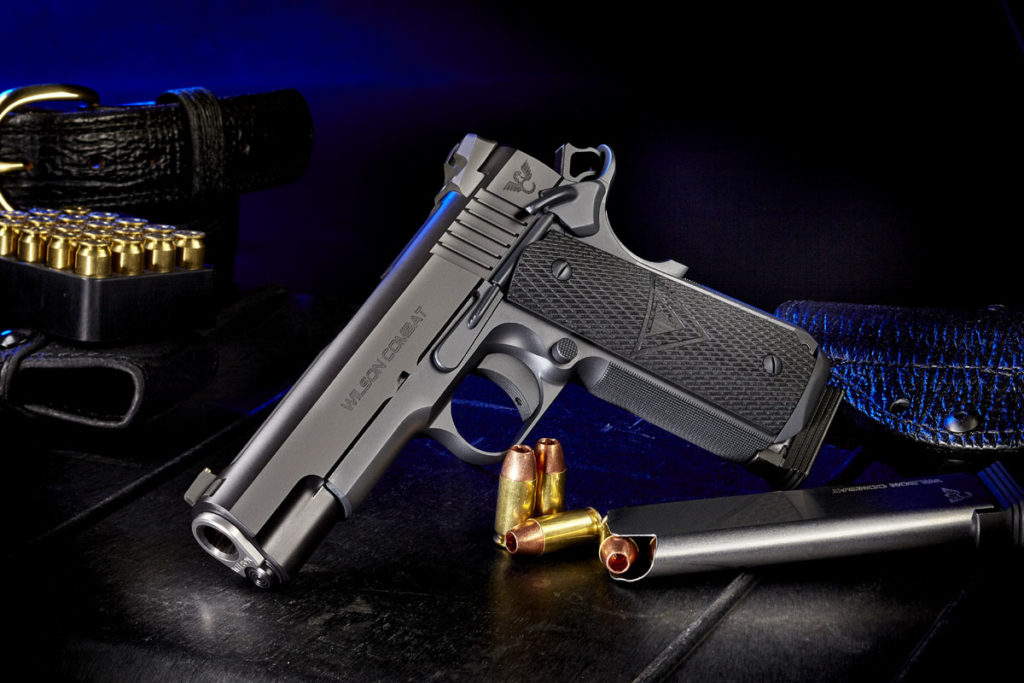 Wilson Ammo – Wilson Combat offers a variety of ammunition, to include a +P load that features the TAC-XP, solid copper hollow point. 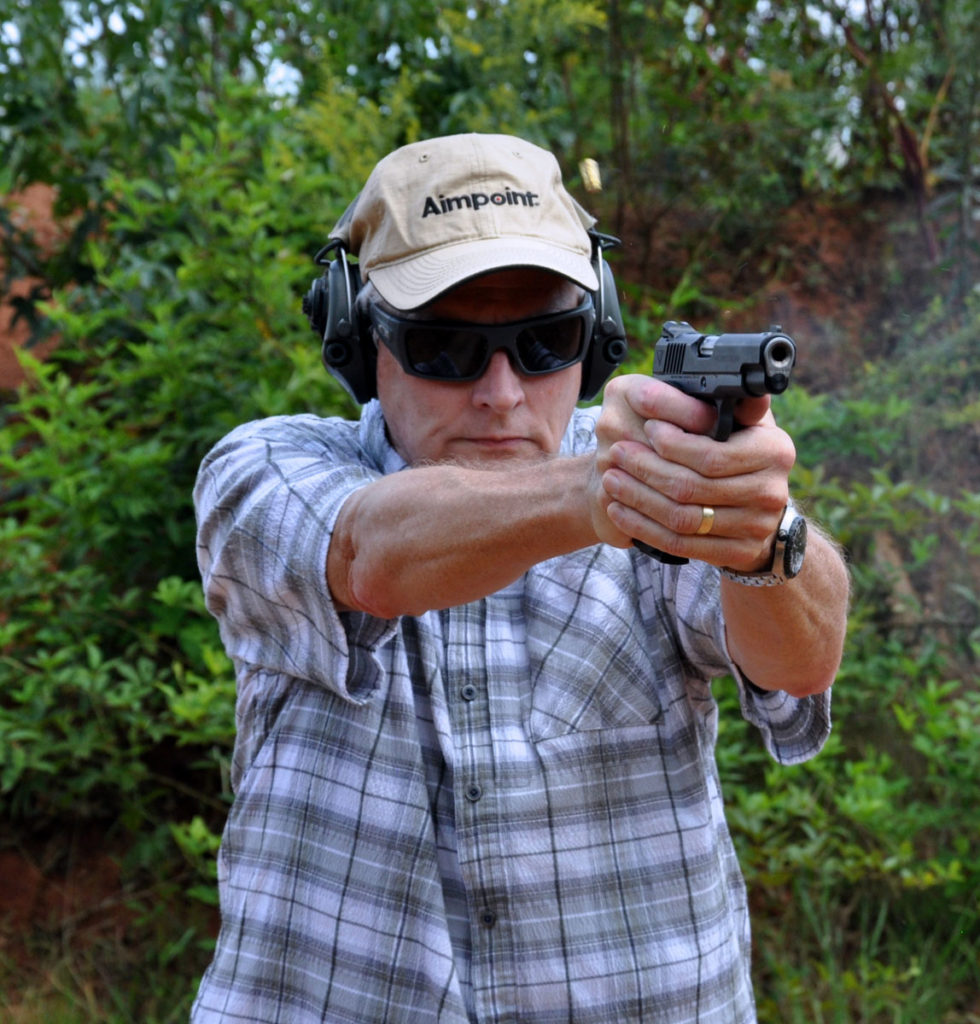 The author running the Vickers Elite Commander at speed. Joy is an all steel 1911 chambered in 9mm.

My range report is rather dull. The Commander ate everything we fed it from the light 95 gr. +P loads to the heavier 135 gr. load. Wilson Combat guarantees that the Vickers Elite will shoot 1.5” groups at 25-yards. I will confess that a 1.5” group at 25-yards is a tough standard for me, and most shooters. The accompanying chart reflects my results when fired, at 25-yards, from a bench with a bag rest. However, while accurate, the Vickers Elite Commander was primarily designed as a personal defense pistol. To that end, I fired my favorite drill, the Hackathorn 10-10-10 drill. Ken developed this drill to test the shooter’s fundamental skills under time. The drill is 10-rounds, fired from 10-yards, in 10-seconds. Shot on an NRA 25-yard bulls eye target, the drill can be surprisingly difficult. Larry scores the drill as all shots must be in the black while Ken uses the point scoring rings. Using Ken’s scoring system, I shot a 96 out of 100 in 9.76 seconds. 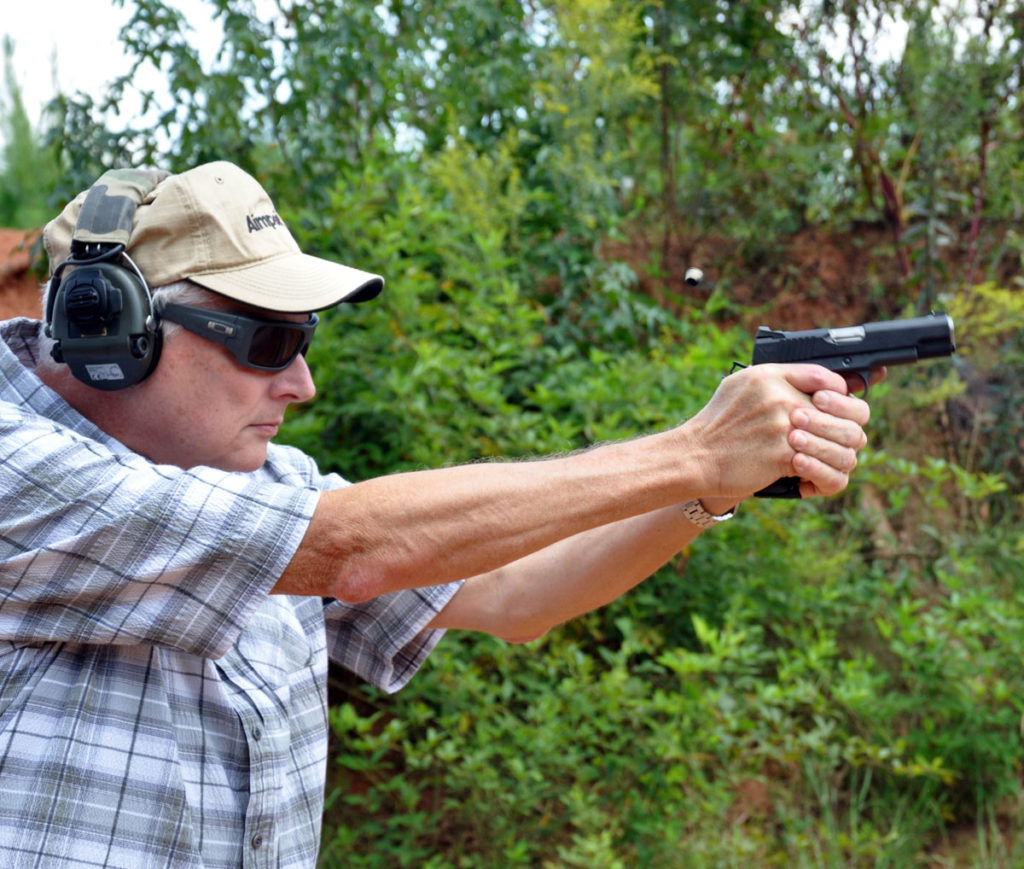 The Vickers Elite Commander was 100% reliable with a wide variety of ammunition.

Unlike polymer wonders, custom 1911s have to be maintained and, most importantly, kept sufficiently lubricated. In the past, I have not been very particular with my choices, often using whatever was on my bench at the time. I found that, over an extended period of time, many of these products evaporated or had a change in viscosity. Gunfighter oil is a 100% synthetic lubricant specially formulated for firearms. It contains no additives for odor or color as these components will break down over time. Gunfighter oil tends to stay in place, not run, and has never gummed up, evaporated, or been degraded by time, temperature, or other conditions.

The partnership between Wilson Combat and Larry Vickers is one that has produced innovative parts and outstanding pistols.  The Vickers Elite is just one more in a line of pistols that are “good to go” for the “worst day in your life.” Give all the Wilson Combat products a look.