Three Shots That Doused the Light: The Assassination of Yitzhak Rabin 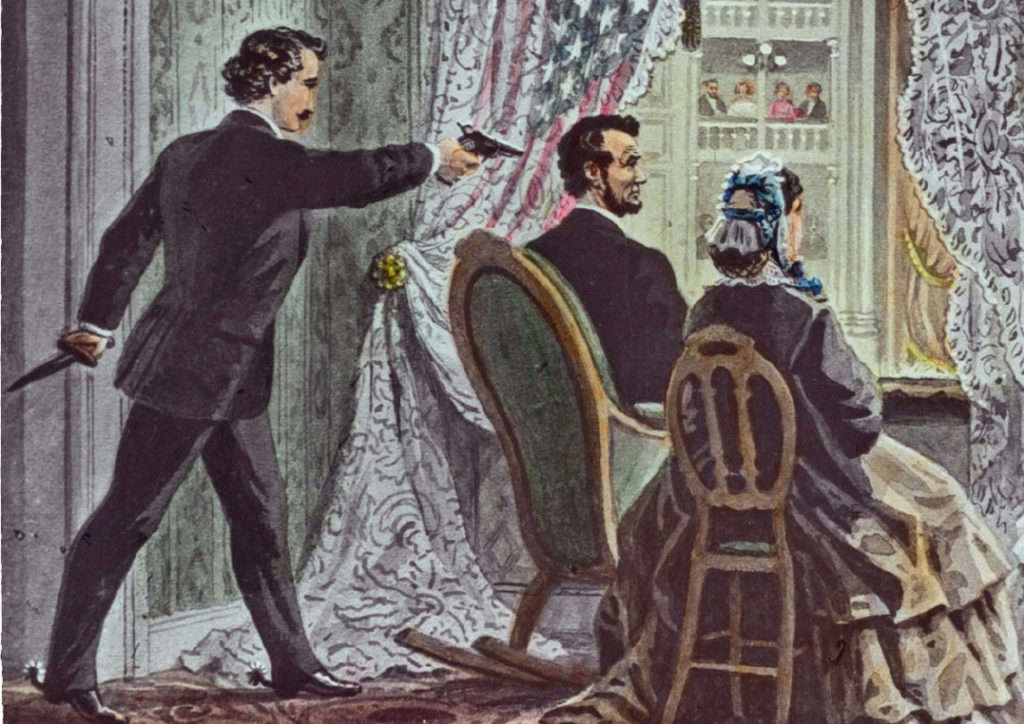 (Pictured: Lincoln’s assassination.) Political assassination by firearm has been a lamentable part of modern history.

The first recorded assassination with a firearm took place in 1570. James Hamilton of Bothwellhaugh, a supporter of Mary, Queen of Scots, used a matchlock carbine to kill James Stewart, the 1st Earl of Moray and Regent of Scotland. Since that time political assassination has become a lamentably recurrent component of our tumultuous modern world. In this ongoing series, we explore the guns that were used in some of history’s most sordid political assassinations. We will also discuss the characters involved and the effects their actions ultimately had on the affairs of men.

When Peace Gets Crushed by Chaos 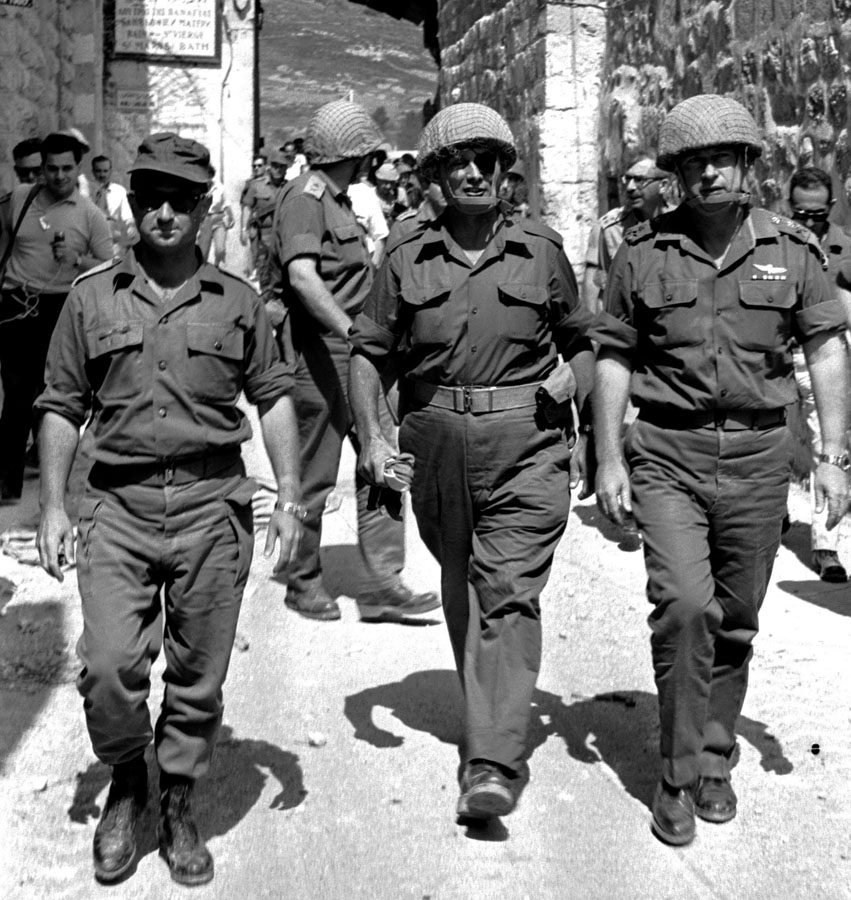 Yitzhak Rabin, shown here on the left during the Six Day War, was a professional soldier who served in the IDF for 27 years before entering politics.

Yitzhak Rabin was a politician, statesman, and general who served as the fifth Prime Minister of Israel. He was the first Israeli Prime Minister to have actually been born in the country. Rabin spent 27 years as a soldier, fighting in some of the bitterest engagements in Israel’s bloody history. His military career began in the Palmach, an elite Israeli commando unit, and culminated with his leading Israeli forces during the 1967 Six-Day War.

The Six-Day War was arguably the most remarkable feat of arms in human history. In less than a week after a coordinated surprise attack by the forces of Egypt, Jordan, and Syria, Israel stood poised to threaten Damascus, Amman, and Cairo. Only desperate intervention in the United Nations prevented Israeli forces under General Rabin from advancing into these three capitals. 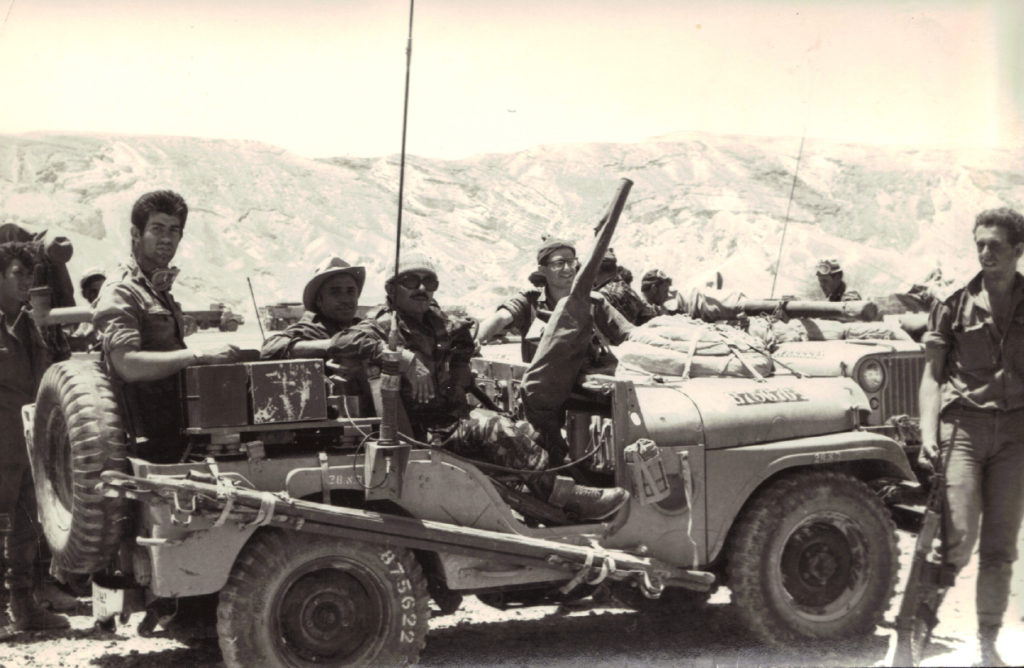 The 1967 Six-Day War was arguably the most remarkable feat of arms in military history. In less than a week the IDF defeated three invading armies on three fronts, forcing its adversaries to sue for peace.

Despite his superlative record as a soldier, Yitzhak Rabin was best remembered as a tireless peacemaker. In 1994 Rabin won the Nobel Peace Prize along with his long-time political rival Shimon Peres and Palestinian leader Yasser Arafat for their work in crafting the Oslo Peace Accords. During that same year, Rabin also inked a peace treaty with Jordan. The man who led the Israeli Defense Forces in their most resounding victory was now the singular personality behind an unprecedented wave of peace in the region. For this reason, extremist factions inside Israel decided that he must die. 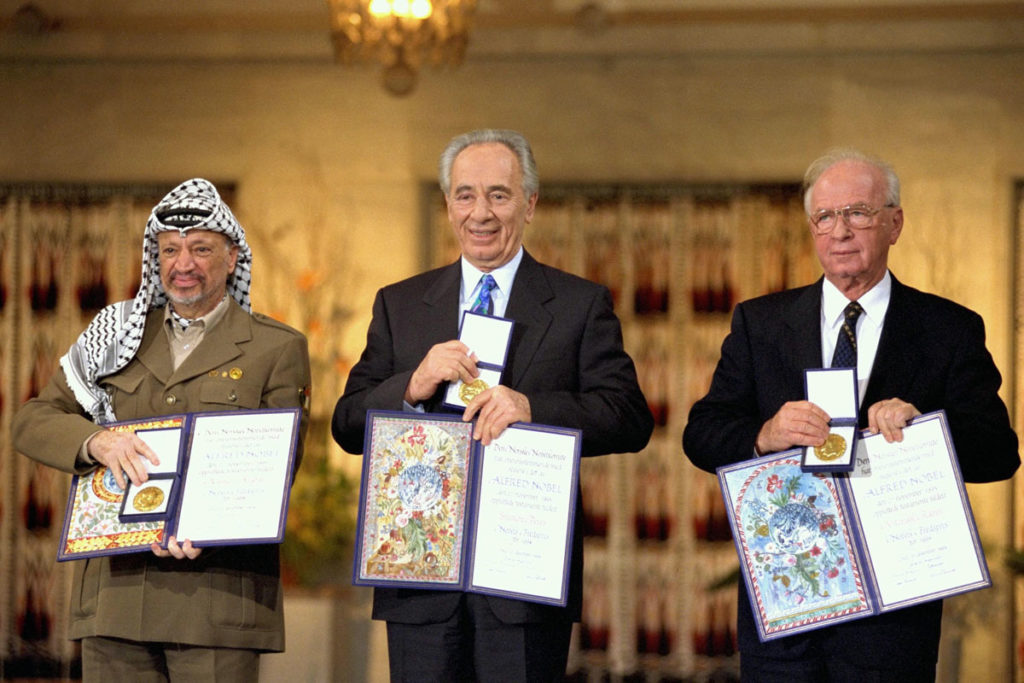 Yitzhak Rabin, shown on the right alongside Shimon Peres and Yasser Arafat, won the Nobel Peace Prize for his efforts crafting the Oslo Peace Accords.

Every society has a minority of twisted people who just want to watch the world burn. In the 1930’s this minority took power in Germany and very nearly destroyed the planet. On November 4, 1995, a radical right-wing Israeli extremist named Yigal Amir stood among a crowd in Tel Aviv, his hand clutching a Beretta 84F .380ACP automatic hidden in his pocket.

Rabin was attending a mass peace rally in the Kings of Israel Square celebrating the bright new world that lay before his struggling nation. As the rally concluded Rabin descended the stairs of the Tel Aviv city hall towards his waiting automobile. Before he reached the car Amir emerged from the crowd and fired three shots from his compact Beretta pistol. Two rounds hit the Israeli Prime Minister in the chest. The third struck Yoram Rubin, one of Rabin’s bodyguards.

Rabin’s security detail detained Amir immediately, but the damage was done. Rabin was rushed to the nearby Ichilov Hospital where he died on the operating table roughly forty minutes after the attack. Amir’s two rounds had penetrated Rabin’s lungs and disrupted the major vessels in his chest. The cause of death was massive blood loss.

Yigal Amir was tried and found guilty of the assassination of Prime Minister Yitzhak Rabin. The trial lasted more than a month. Amir was quoted as having said he was “Satisfied” with the outcome of his mission and that he was “Following the orders of God.” Amir’s brother Hagai and a friend named Dror Adani were also implicated as accomplices.

After fifteen years in solitary confinement, Amir gained a few privileges in prison, including the capacity to communicate. In 2004, he wed a Russian émigré named Larisa Trembovler surreptitiously by proxy. In October 2006, Amir was allowed a 10-hour conjugal visit after which Larisa became pregnant and gave birth to a son. Yigal Amir remains in prison today. His son Yinon Eliya Shalom is eleven years old. 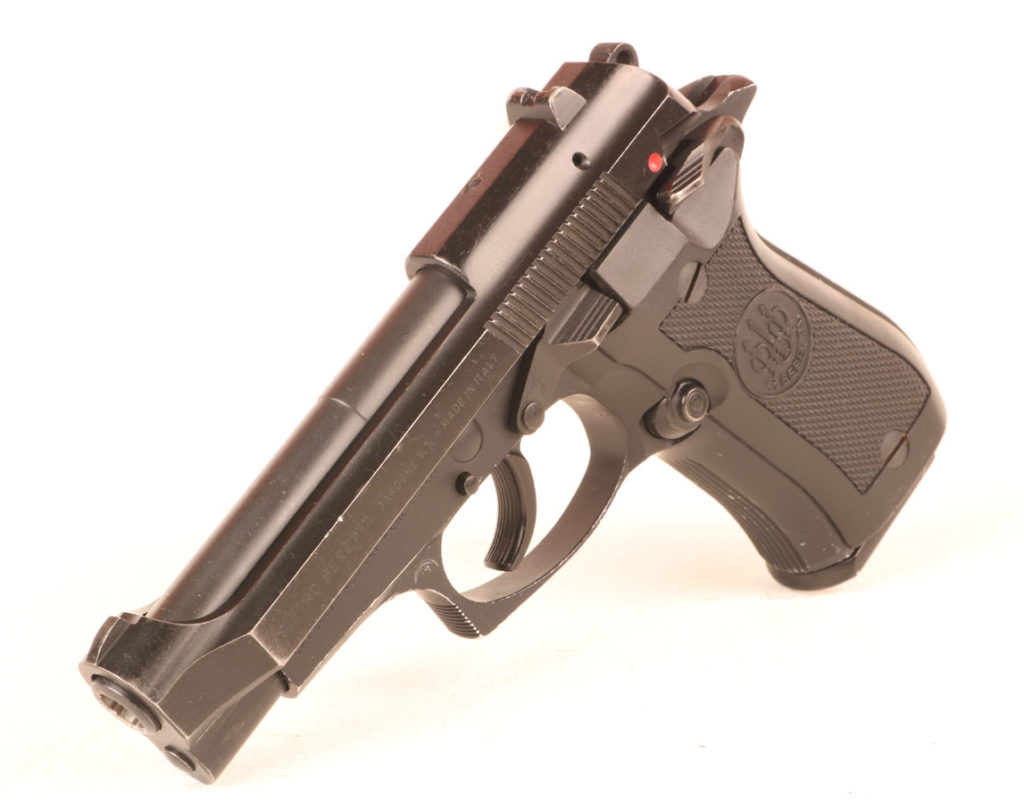 The Beretta 84F is a compact high-capacity .380ACP defensive gun

The Beretta 84F is also known by its original model name, the Series 81. The gun’s trade name is the Cheetah. First introduced in 1976, the 84F bears a striking esoteric similarity to the familiar Beretta Model 92 that became the US military M9. However, the two guns are fundamentally disparate designs. The Series 81 pistols were offered in .32ACP, .380ACP, and .22LR. 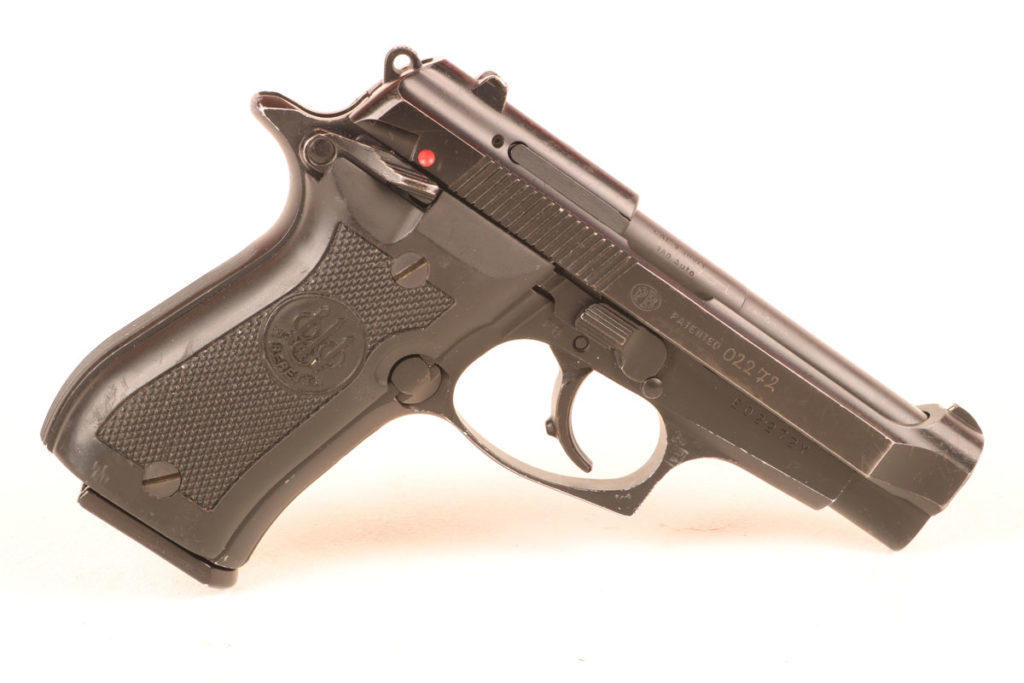 The Beretta 84F, also known as the Cheetah, sports a DA/SA trigger and a variety of advanced features. 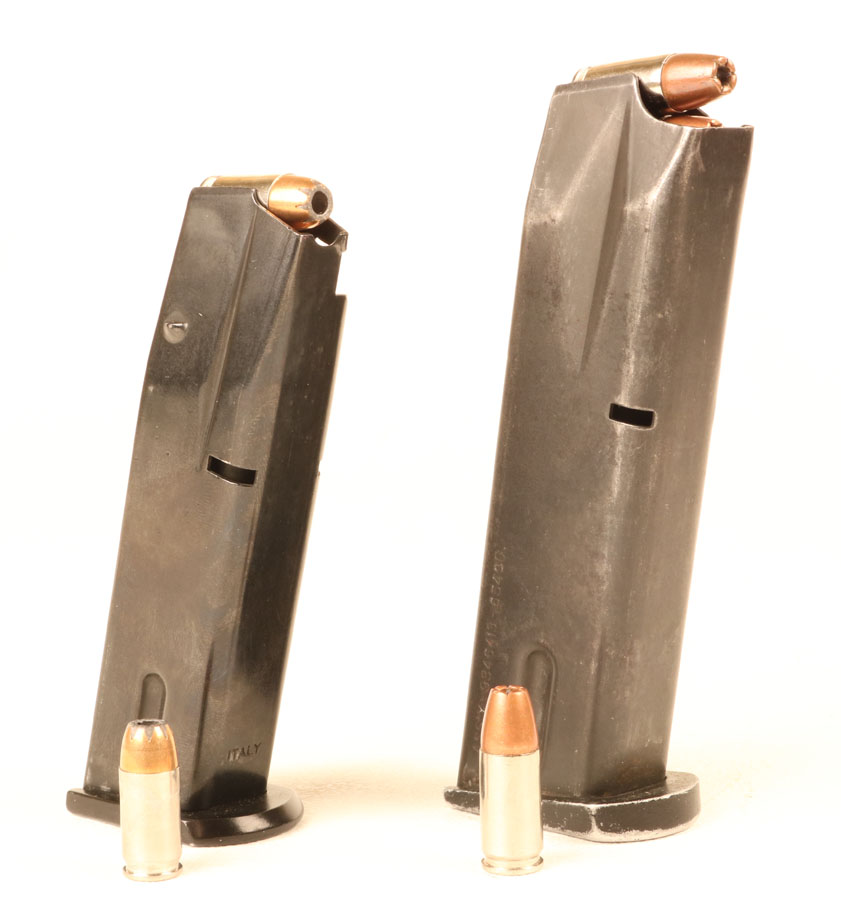 Arguably the most remarkable aspect of the Beretta 84F is its double column, single feed high-capacity magazine. The 84F .380ACP mag is shown on the left alongside the larger Model 92 9mm version.

Arguably the most remarkable aspect of the .380 Beretta 84F is its double column magazine. Sporting the familiar double column, single feed architecture pioneered in the Browning Hi Power, the 84F offers thirteen plus one rounds onboard. Unlike the locked breech 9mm Model 92, the 84F operates via direct unlocked blowback.

Much of the architecture of the Model 84F favors that of the larger Model 92. The trigger guard is squared off at the front for better gripping with the support hand if desired. The trigger is of the familiar double action/single action sort as found on the M9, and it feels very similar in action.

The barrel is chrome-plated, and the magazine release is in the expected spot underneath the right thumb when firing right-handed. The frame-mounted safety operates in reverse of that of the M9. Up is safe, and down is fire. The safety lever is mirrored on both sides of the weapon. The plastic grips and frame treatment on the 84F favor that of the larger M9 as well.

The Beretta 84F bears a striking morphological similarity to its larger sibling, the 9mm Model 92. Despite appearances, the two guns are mechanically very different.

The steel slide features the same open-topped architecture of most modern Beretta handguns, and the frame is cut from aluminum. The finish is a proprietary Beretta product called Bruniton. Disassembly is identical to that of the M9.

The Beretta 84 is still in production today, and it is a common find on the used gun market in America. Interestingly, many of the currently available used 84F pistols were imported as surplus from Israel. The vast majority of these guns will be found chambered in .380ACP. 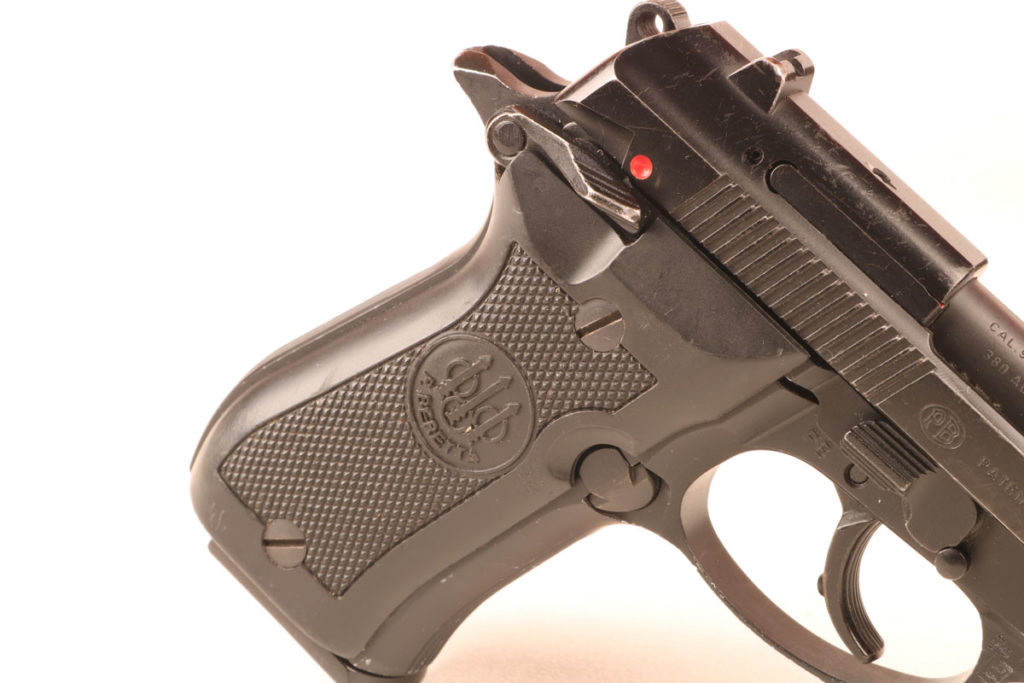 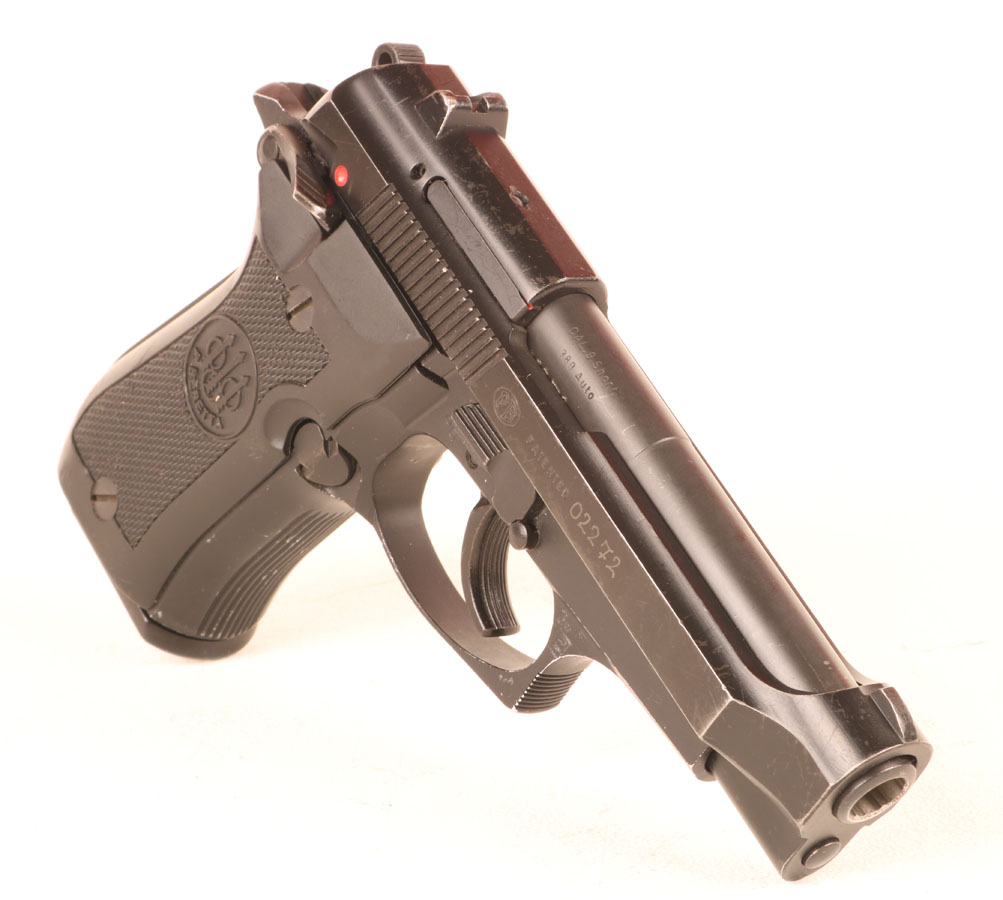 The same attributes that make the Beretta 84F a fine defensive gun made it a lethal assassin’s tool. 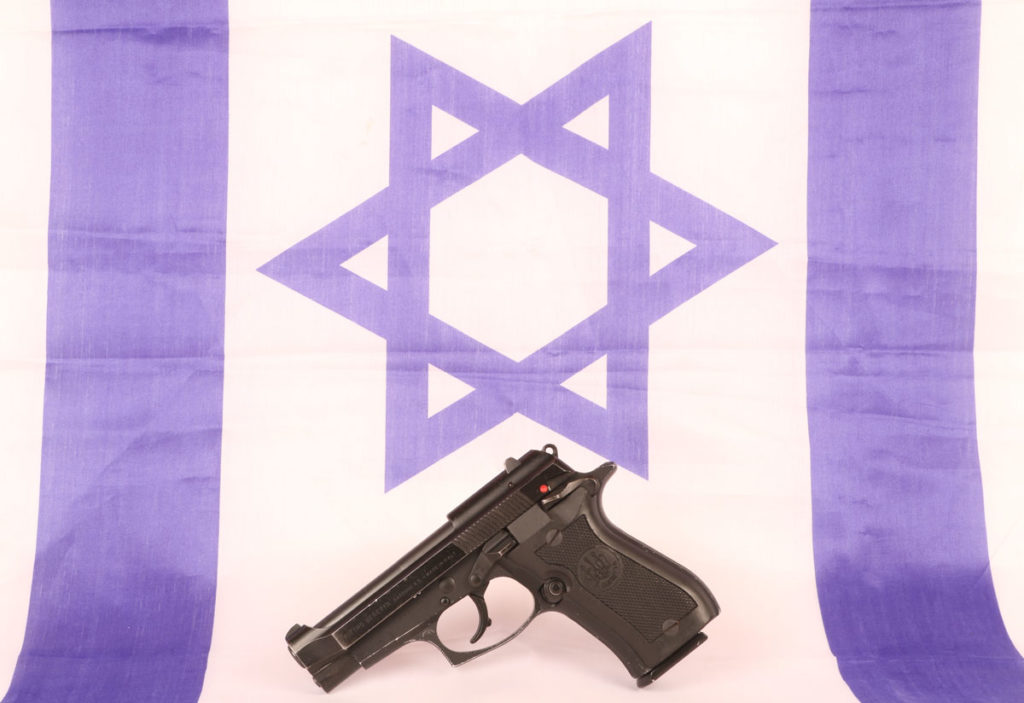 Many of the used Model 84F pistols available on the market today were imported from Israel.

The Beretta 84F is surprisingly bulky for a .380 concealment gun. As .380 rounds are just as wide as 9mm Parabellum and the magazine is double stack this is not surprising. The end result is a compact pocket gun that still fills the hand. 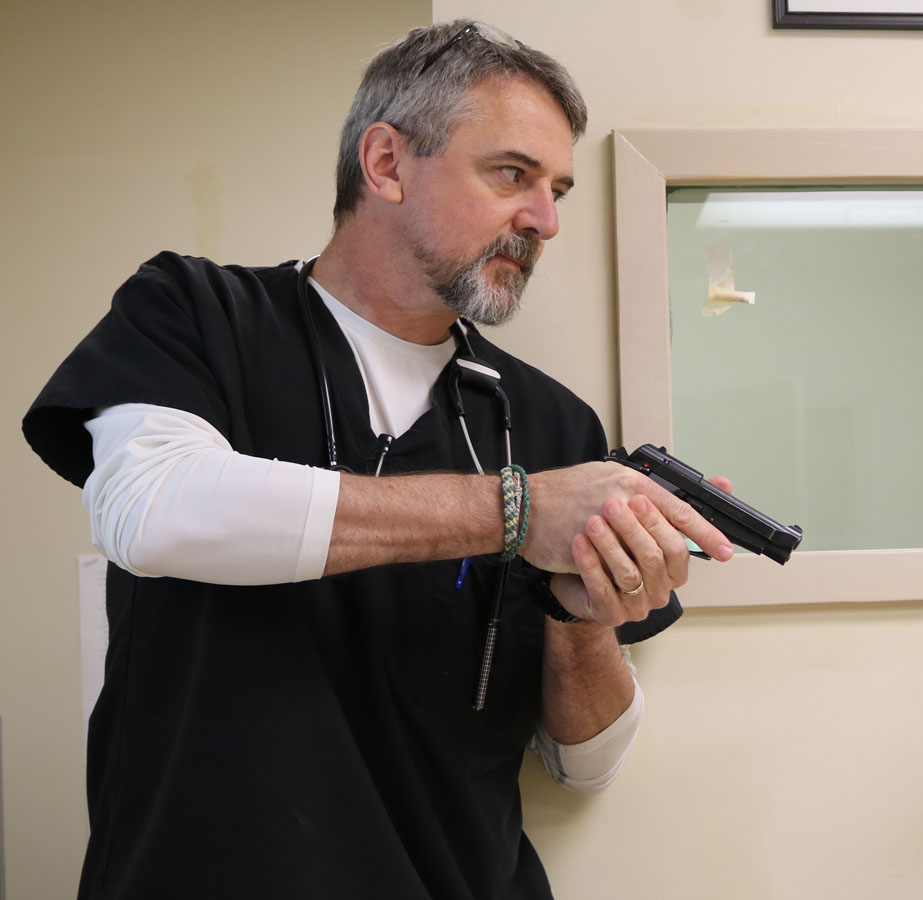 The Beretta 84F is a compact and effective defensive tool. 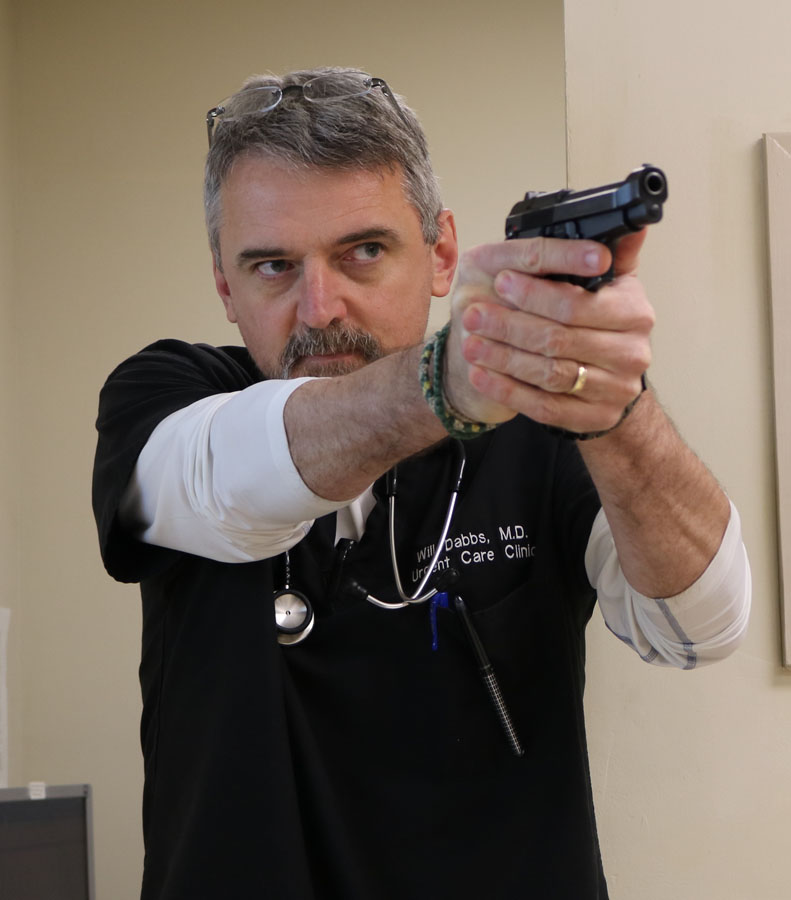 The 84F carries a lot of firepower in a compact package.

The trigger is essentially identical to that of the M9. You either love it or hate it. No matter how hard I try I can never seem to shoot to precisely the same point of impact in both double action and single action modes. Neither trigger option is quite as sharp and crisp as the striker-fired version on a Glock or HP VP9, but it is obviously altogether adequate for close range use.

The recoil impulse is snappier than expected due to the unlocked nature of the action. The end result is not painful or even unpleasant, but it is surprisingly energetic. The front and rear sights both sport a single white dot. Magazines drop free cleanly, and the gun runs fast if you have a spare magazine or three handy. The wide grip distributes the recoil impulse better than is the case with slimmer blowback guns like the Walther PPK or Makarov PM. 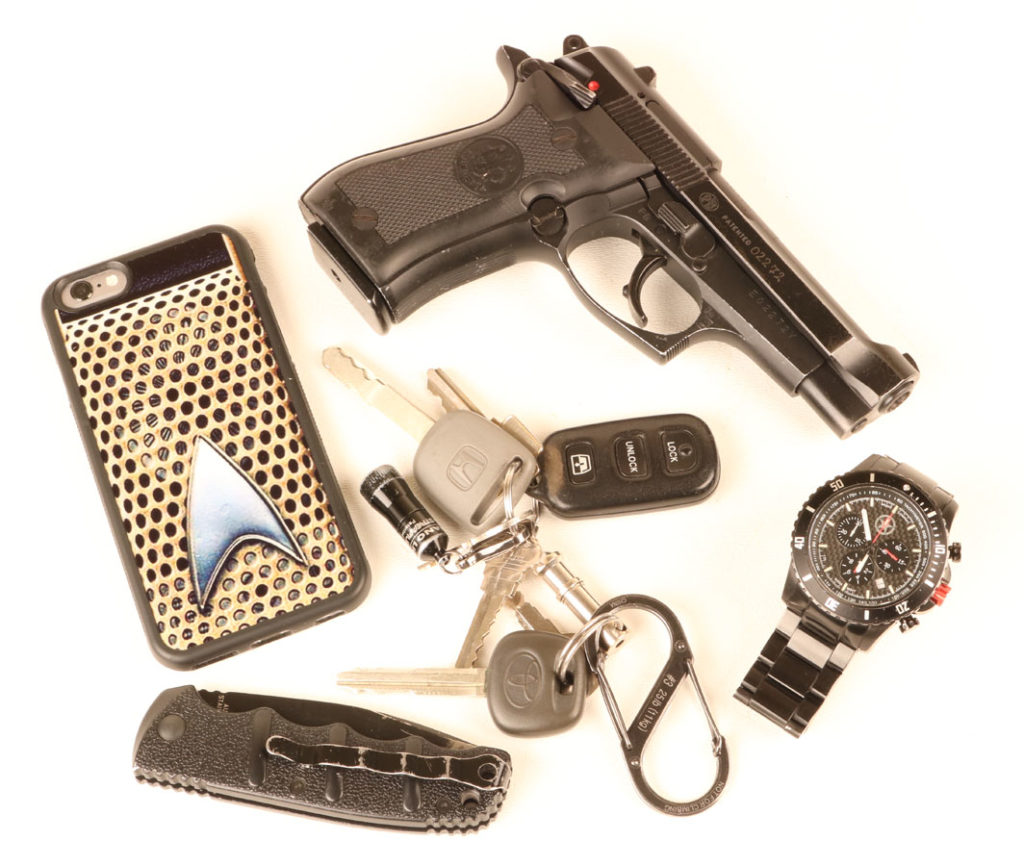 The Beretta 84F is small enough for daily concealed carry. 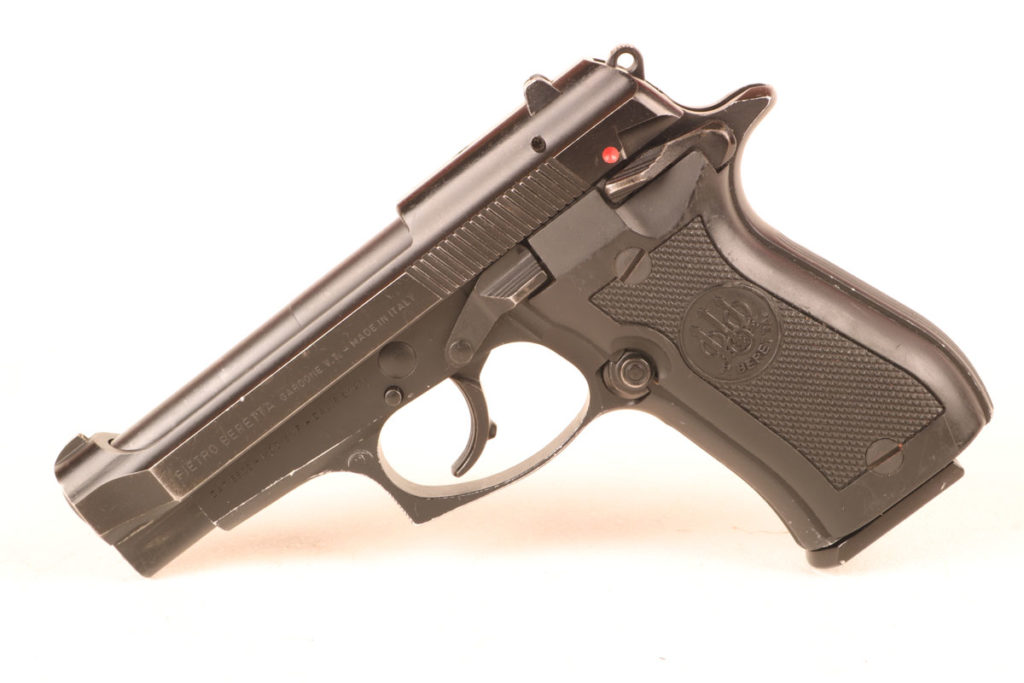 The Beretta 84F packs a lot of features into a small packable gun. 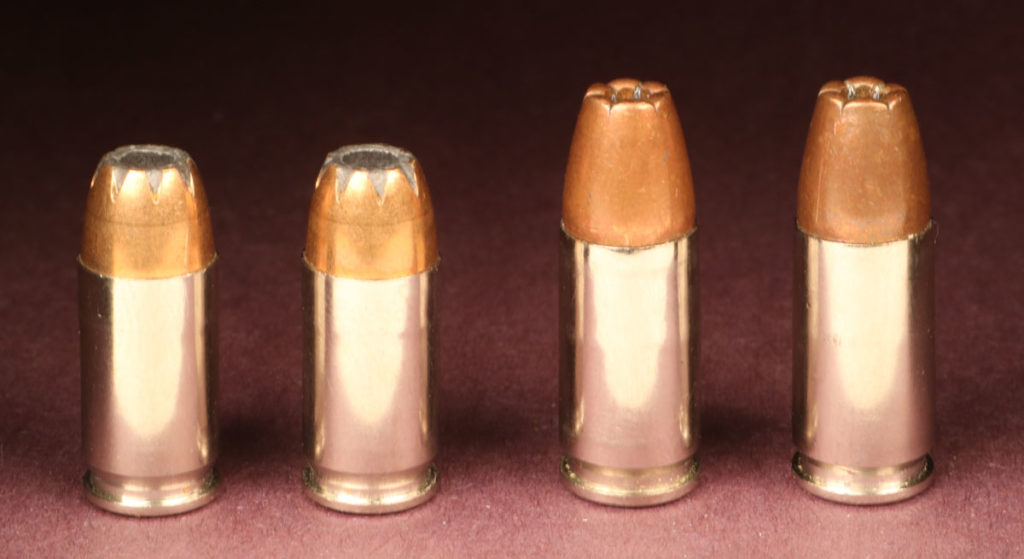 The .380ACP, shown here on the left alongside the 9mm Parabellum, is generally considered to be on the lower end of the acceptable power spectrum for defensive handgun cartridges. In the wrong hands, however, it is undeniably effective. 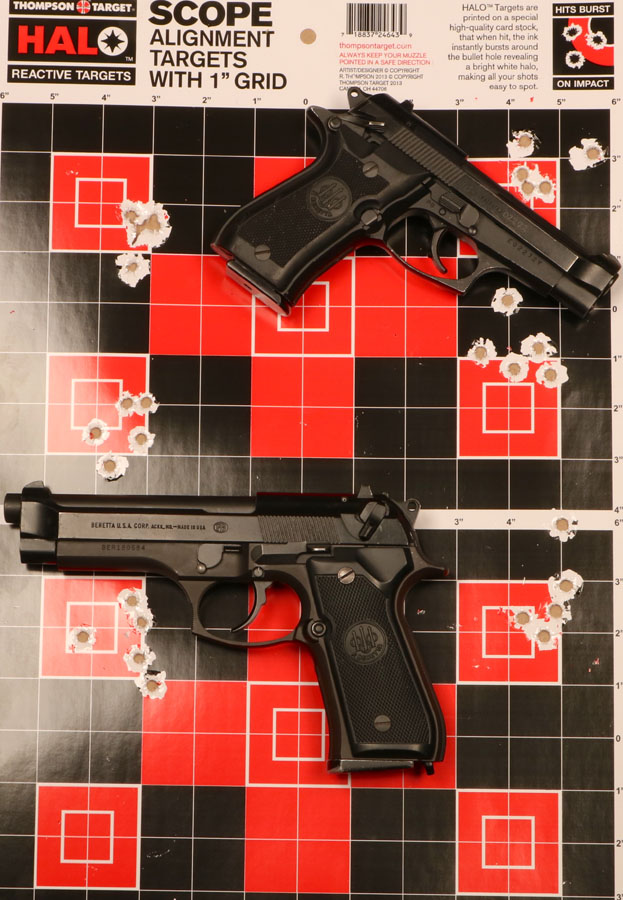 The Beretta 84F shoots about as well as its larger brother, the Model 92. The 84F produced the groups on the right.

A cursory glance at the headlines any given day will show that the Middle East yet remains mired in a fairly endless morass of terror, pain, and chaos. A few years ago I stood on the back balcony of my hotel in Israel with my 13-year-old daughter by my side and watched the rockets coming up out of Gaza. It was a surreal experience to be downrange from Russian artillery in the presence of my little girl. This is the world wherein these people live many days. 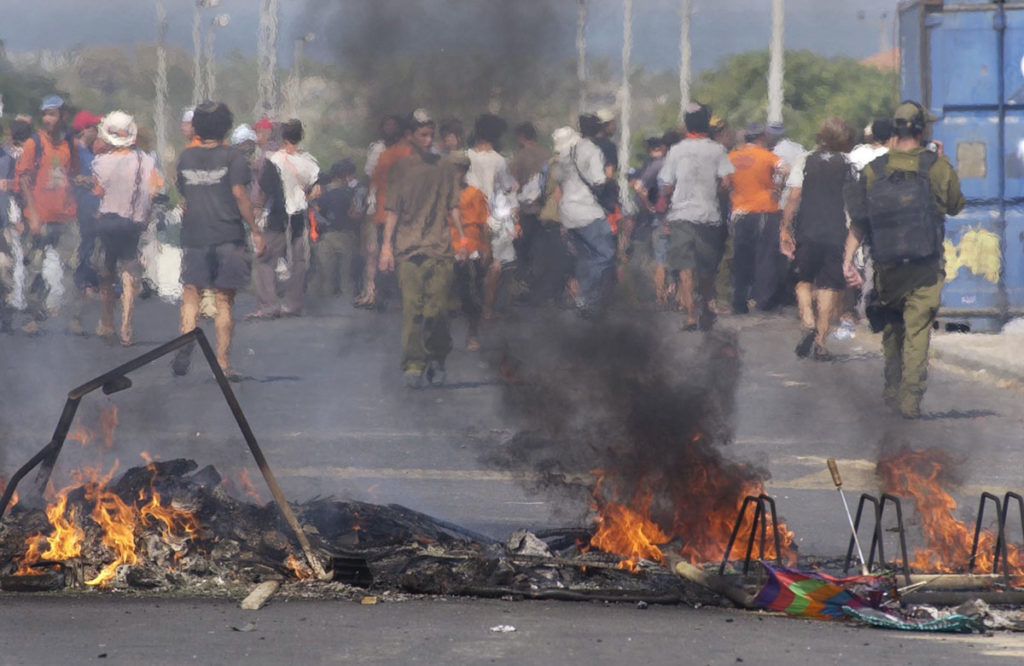 Violence in the Middle East continues unabated. However, it likely would be markedly worse were it not for the tireless efforts of peacemakers like Yitzhak Rabin.

In the mid-1990’s Yitzhak Rabin, a former warrior who had served his country under arms for twenty-seven years showed the planet that a professional soldier can also be a peacemaker. Rabin reached across divides previously thought unbridgeable to work with his enemies toward a lasting peace. On a sunny afternoon in November of 1995 two rounds from Yigal Amir’s Beretta 84F snuffed out that light. 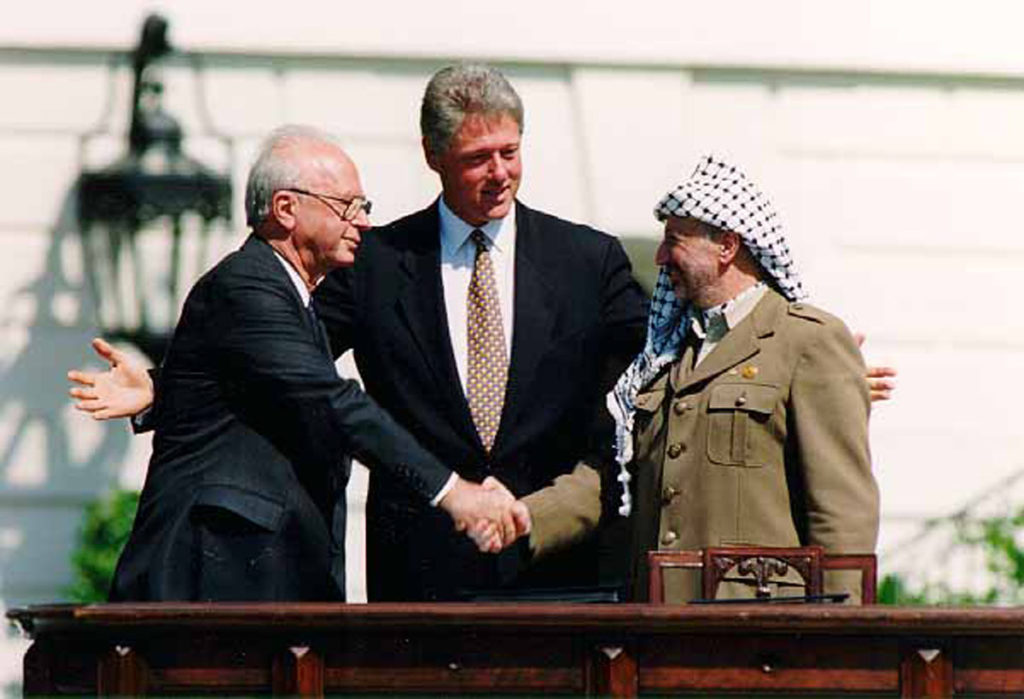 Bill Clinton delivered part of the eulogy at the funeral for Yitzhak Rabin.

Yitzhak Rabin’s assassination shocked both Israel and the world. The following day hundreds of thousands of Israelis thronged to the site of the murder to mourn. US President Bill Clinton, Australian Prime Minister Paul Keating, Egyptian President Hosni Mubarak, and King Hussein of Jordan attended Rabin’s funeral. Bill Clinton delivered a eulogy wherein he closed with, “Shalom, Haver.” This translates to “Goodbye, Friend.”

Next post: Know Your Rights: If You Disclose You Are Carrying Do You Consent to be Searched?