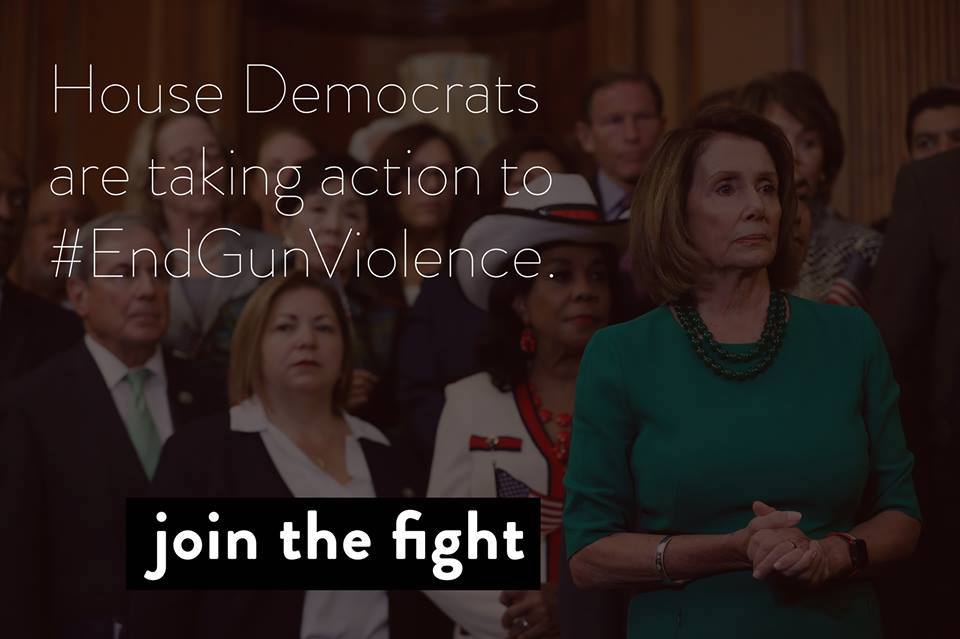 Join the fight... AGAINST THIS BILL!!! (Photo: Pelosi/Facebook)

The House passed H.R. 8 today.  Known as the “Bipartisan Background Checks Act of 2019,” the bill mandates background checks be performed on all gun transfers and sales, including firearm purchases made privately, whether it be online or at gun shows.  Under the current federal law, only licensed gun dealers are required to conduct a background check.

There are some exceptions.  The bill does not apply to firearm transfers between close relatives, and allows a firearm to be loaned to someone using it at a shooting range or for the purposes of hunting and trapping, unless there is a reason to suspect the gun will be used in a crime or that the person receiving the gun is prohibited from possessing the gun under state or federal law.  A temporary transfer of a gun is also allowed in situations where it is necessary to prevent imminent death or great bodily harm.

At a press conference ahead of its passage, the bill’s sponsor, Rep. Mike Thompson, D-California, stated that expanded background checks would “help save lives.”  He also criticized how difficult it was to get a gun control vote during the past eight years when the House was controlled by the Republicans.

“We were not able to get a single hearing or have a single vote in the House under the last majority.  It’s a new day,” Thompson said.

The bill had minor GOP support in the House.  Five Republicans co-sponsored the measure.  However, in the end, only eight Republicans crossed party lines to support the bill.

Most Republicans criticized the bill, arguing that if it is passed into law, the bill would prevent law-abiding citizens from having access to firearms.

A prominent opponent of the bill is Rep. Steve Scalise, R-Louisiana, who currently serves as the House minority whip.

“I’m proud to work with the NRA to oppose these gun control bills they are bringing to the Capitol — H.R. 8 and H.R. 1112,” Scalise said in a video he tweeted before the vote.  “Both of these bills will strongly infringe upon the rights of law-abiding citizens to buy and ultimately share their own guns.”

Chris W. Cox, the executive director of the National Rifle Association’s Institute for Legislative Action, issued the following response to the passage of H.R. 8.

“This extreme gun control bill will make criminals out of law-abiding Americans.  It will also make it harder for good people to defend themselves and their families.  Criminals, on the other hand, will continue to get their firearms the way they always have — through the black market, theft, and straw purchases.  Forcing more government paperwork and additional fees on good people trying to exercise a constitutional right will do nothing to make Americans safer.  On behalf of our members and supporters, the National Rifle Association will continue to fight to preserve the constitutionally protected right to self-defense,” Cox said.

Although passed by the House, it is unlikely that the bill will make it through the Republican-controlled Senate.  Even if it did, a statement from the White House opposing the bill indicates that President Trump would likely veto the measure if it were presented for his signature.

A second gun control bill, H.R. 1112, which would increase the number of days (from three to ten business days) a firearms dealer must wait for a federal background check to be completed before proceeding with the sale or transfer is scheduled to be taken up by the House on Thursday.  Stay tuned for updates.

House Republican Whip @SteveScalise explains the irony of #HR8 and #HR1112. Law-abiding citizens will be treated as criminals and criminals will be untouched. Dems even rejected an amendment requiring ICE notification when illegals fail a background check. https://t.co/WOdftwRpeN pic.twitter.com/74R3vft5uD

Next post: Their Own Worst Enemy: Leftist Disarmament Agenda Concentrates Guns in Hands of ‘Tyrannical’ Trump