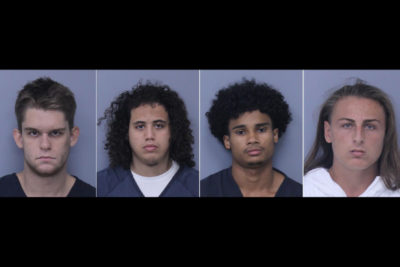 A homeowner in a rural neighborhood outside of St. Augustine, Fl., earlier this month fought off five intruders with a handgun, killing 24-year-old Paul Pettigrew and forcing the remaining four to flee as police arrived.

All four suspects are currently in custody, and they’ve been charged with felony murder and attempted robbery.

It’s still unclear why the five were in the home at 2:00 a.m., but St. Johns County Undersheriff Matthew Cline said at a press conference their motives appear to be drug-related.

“Whether their presence was known by the residents on Cowan Road as being consensual or as a robbery, we’re not quite sure yet. Everyone is being interviewed as we speak. Obviously, things didn’t go very well. There were shots fired and an individual… is deceased on scene,” Cline said.

SEE ALSO: Homeowner Who Captured Escaped Georgia Inmates: ‘I loaded up every weapon I could’

Law enforcement arrested two of the four suspects shortly after the incident but engaged in an extensive manhunt for the remaining two, who fled into the nearby woods.

“We had deputies that have suffered heat exhaustion. We’ve got deputies that are being treated at Flagler Hospital, as we speak,” Cline said.

In the end, a tip from a citizen led to the arrest of the remaining individuals.

“The fact that someone had the courage to see something and say something and pick up the phone, make the call to the St. Johns County Sheriff’s Office, we were able to end this thing,” Cline said.

The suspects range from 18-21 years of age, and police identified them as Christopher Pettigrew (who is the brother of the deceased), Zared Matthews, Jeffrey Balcom and Xavier Williams.

Cline also noted that the homeowner has been cooperating with the investigation, and St. Johns County Sheriff’s Office Commander Chuck Mulligan told local media that the person has not been charged with a crime.

The four intruders have been charged under a Florida statute that allows a person to be charged with murder if a death occurs during the commission of certain “enumerated offenses.” These include a murder of another person, robbery, burglary, kidnapping, aggravated child abuse, home-invasion robbery and several other crimes.

Chief Assistant State Attorney Jason Lewis, with the 7th Judicial Circuit State Attorney’s Office, explained to local media that the statue is intended to punish individuals who participate in crimes in which there is a likelihood that someone could be killed.

St. Johns County Sheriff’s Office continues to investigate this incident and did not respond to a request for comment.

“They were not inside the home, they were attempting to get inside the home to commit an alleged drug-related home invasion robbery,” said Charles E. Mulligan, a spokesperson for the St. Johns Sheriff’s Office in an email to GunsAmerica.

“The homeowner has not been charged,” he added.

Previous post: Savage Has a Side-Charger in 6mm and New Heavy Barrel Rascals