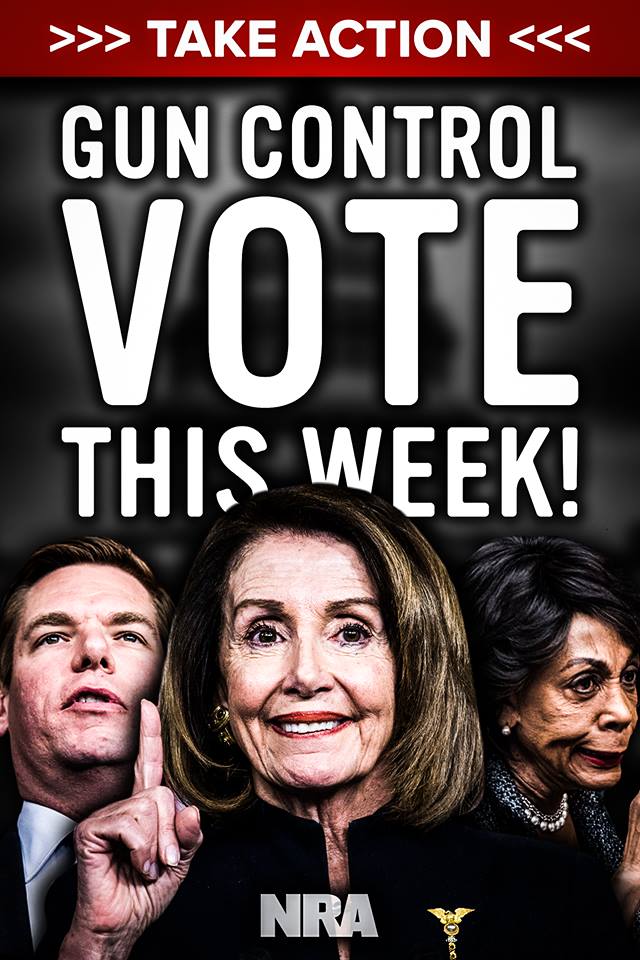 Take action on these bills (click on image) as they head to the Senate for consideration. (Photo: Facebook)

The House voted today to approve another anti-gun bill.  The Enhanced Background Checks Act of 2019 (H.R. 1112) passed by a 228-198 vote.  Three Republicans joined Democrats in voting in favor of the measure.  Seven Democrats broke party lines and voted against the bill.  This marks the second major gun bill to clear the House this week.

If the bill becomes law, a gun buyer will have to take the following steps when purchasing a firearm from a Federal Firearms Licensee (FFL):

Essentially, the bill would allow the federal government to delay the acquisition of a firearm by up to 20 business days just by refusing or failing to act on the transfer request.  It should be noted that a NICS check is only valid for 30 days.  NRA warns that buyers could be caught in an endless cycle of delays under H.R. 1112 because the wait time is based on business days, not just days.

As reported by the Wall Street Journal: The FBI indicates that roughly 92% of the NICS checks render an instant decision.  If the check is clean, the FFL will get a notice to “proceed” with the sale.  If the check indicates the buyer is a prohibited person, then the FFL receives a notice that the transfer is “denied” and the sale cannot go through.

In about 8% of cases, the decision is “delayed,” and under the current law, a buyer need only wait three days for the government to act.  If no action is taken within the three-day period then the FFL may proceed with the sale.

Those supporting the bill state it is needed to close the so-called “Charleston loophole,” arguing that the current three-day waiting period allowed the shooter in the Emanuel AME Church attack to obtain his weapon.

Reverend Sharon Risher, whose mother and cousins were shot and killed at the Emanuel AME Church spoke after the bill was passed.

“The hate-filled man who killed my mother and cousins four years ago never should have gotten his hands on a gun, and yet, through a loophole, he was able to arm himself and take the lives of nine church-goers, peacefully in prayer,” said Risher.  “No family should have to live with the pain of having a loved one taken by senseless and preventable gun violence.  It is high time for Congress to address this loophole, properly enforce our background checks system and keep guns out of the hands of people with hateful intentions.”

Republican leaders slammed the legislation.  They argued that the extension places excessive hurdles in the way of those trying to lawfully purchase a firearm.

“I’m not sure if H.R. 1112 was written this way out of just messed-up writing or malice.  I’m not sure, but it does do this and there’s no mistaking what is written,” said House Committee ranking member Doug Collins (R-Georgia) on the floor.  “As I said many times, we do not vote on aspirational ideas in this chamber.  They’re great to debate, but we don’t vote on aspirational ideas.  We vote on words on paper and words on paper are just as I have described.  I will let the American people determine what the intent was here.”

Chris W. Cox, the executive director of the National Rifle Association Institute for Legislative Action released a written statement in response to the bill’s passage.

“The anti-gun politicians in the House of Representatives continue to employ the shameful tactic of exploiting tragedies to market gun control that won’t prevent criminals from committing murder.  It’s a sham and the Charleston Loophole bill is the perfect example of their dishonesty.  The assertion that a supposed 10-day delay would have prevented a crime that took place over 60 days after the initial delay is ridiculous.  This legislation would not have prevented the Charleston murders, and even worse, the legislation is so poorly drafted it would put law-abiding citizens who need a firearm for self-defense at risk of trapping them in an endless loop of delays.  The NRA will continue to fight for the constitutional right of law-abiding Americans to defend themselves and their families without apology,” Cox said.

Although passed by the House, it is unlikely that the bill will make it through the Republican-controlled Senate.  Even if it did, a statement from the White House opposing the bill indicates that President Trump would likely veto the measure if it were presented for his signature.

Next post: A Covert Gun for the 21st Century: The Cell Phone Pistol from Ideal Conceal (Full Review + Video)