Hundreds Rally in Minnesota to Protect 2A Rights 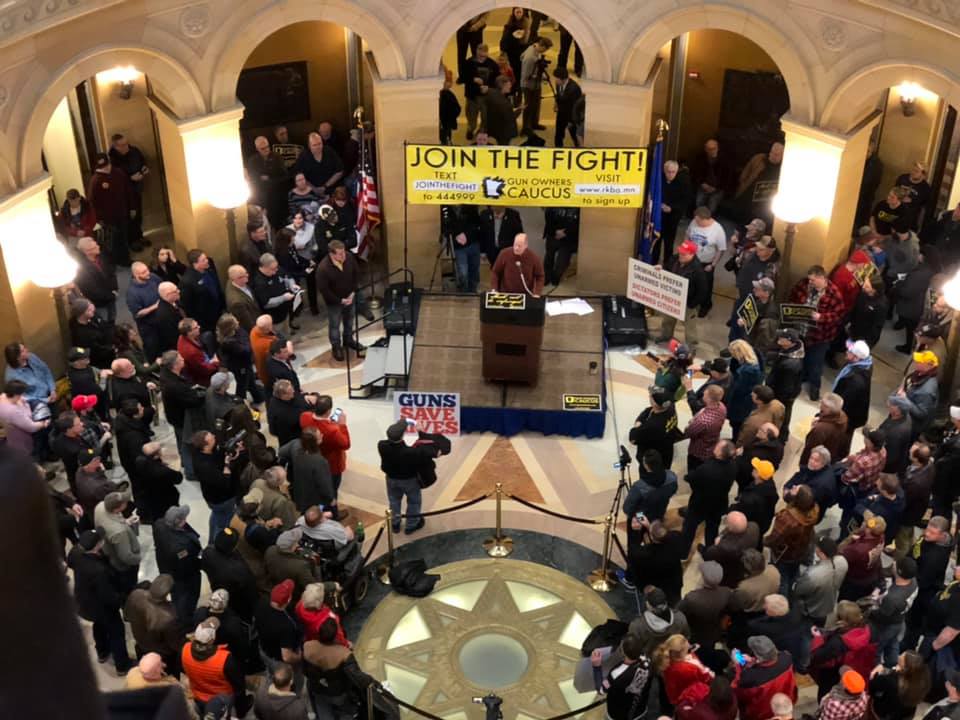 State Senate Majority Leader Paul Gazelka, who promised to “do everything in my power” to stop any new gun laws from passing this session, posted this picture of the gun-rights rally on his social media page. (Photo: Facebook)

Hundreds of people stormed the Capitol in Minnesota to demonstrate against the introduction of new gun control laws.  The rally, organized by the Minnesota Gun Owners Caucus, brought in people of all ages from across the state.

The reason for the rally?  Democrats had pledged early in the legislative session to make two gun control measures their top priority for the year.  The two measures are known as HF 8 and HF 9.  HF 8 is a bill that would expand criminal background checks to cover private sellers.  HF 9 is a bill that would formally adopt a “red flag” law which would allow relatives or law enforcement officers to petition a court to confiscate firearms from people deemed to be a danger to themselves or others.

The Democrats and their supports call the proposed gun laws “common sense.”  The anti-gun group Protect Minnesota issued a written statement in support of the proposed measures.

“These are not extreme or experimental measures,” the statement said. “Half of all Americans live in states that have comprehensive criminal background checks and over a third live in states with Red Flag laws.”

“It’s about our inalienable rights to self-defense as Americans.  It’s about our right to defend ourselves against a tyrannical government.  That’s why our Founding Fathers wrote the Second Amendment in the Bill of Rights,” one of the speakers said according to local news affiliate WCCO.

“There’s a lot of us in this room that have had enough, and it’s time to start riding herd on the rest of these people that want to take your rights away from you,” Republican Rep. Cal Bahr told the crowd.  “They will not go quietly into the good night.  They need to be kicked to the curb and stomped on and run over a few times.”

“Legal background checks lead to lists, lists lead to databases, databases lead to registration, registration leads to confiscation,” said Republican Rep. Steve Drazkowski.  “History clearly shows us, through the millions who have died because of government’s confiscation of guns, that we must stand firm.”

Supporters of the proposed laws are hoping that recently elected representatives running on a “common-sense gun safety” platform will allow the measures to become law.

However, the Star Tribune reports that Senate Majority Leader Paul Gazelka has told gun rights supporters that he would “do everything in my power” to stop any new gun laws from passing this session (see Gazelka’s speech in the video below).