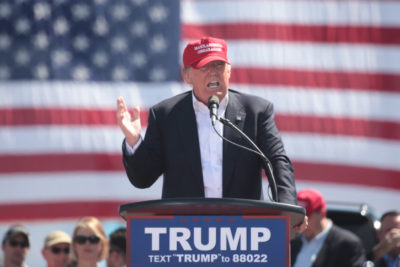 President Donald Trump’s national emergency declaration last week prompted the most predictable deluge of editorials since Parkland, all with the same basic message: The President is one executive order away from Adolf Hitler.

“Trump’s national emergency declaration once again highlights his affinity for strongmen — and authoritarianism” declared the Washington Post’s Eugene Scott. The Atlantic’s Elizabeth Goitein believes the President is “eager” to push the United States towards “authoritarianism,” and the New York Times’s editorial board claims Trump’s “executive overreach” will “damage American democracy” for decades to come.

This is nothing new for the mainstream media. They’ve been accusing the President of authoritarianism almost since his first day in office. But the media and leftist politicians have also pushed an anti-gun agenda radically inconsistent with their belief in Trump as dictator-in-chief.

Take Eugene Scott, for example. Four months prior to calling the President an authoritarian, he penned another op-ed highlighting the “broad” support for stricter federal gun control laws. Among the specific policies he mentions (and tacitly supports), he includes a proposal that would bar anyone on a federal watch list from purchasing a firearm.

“Bowers [the murderer in the Pittsburgh synagogue massacre], who had 21 guns registered under his name, was not on any federal watch list,” Scott notes. “Most Americans would have supported him not being able to buy guns had he been.”

Scott might be unfamiliar with how federal watch lists work, but most are controlled by, well, federal agencies. These agencies are controlled by the executive branch, whose head is—drum roll please—Donald “Benito Mussolini” Trump.

Scott, in other words, wants to grant a future dictator the near-unilateral power to disarm the American people.

Scott isn’t alone. Anti-gun leftists writ large hold the same contradictory positions, but it’s amazing how many individual writers, editors, and politicians have called Trump a dictator one month and called for disarmament the next. Here’s a run-down of just a few:

I could go on, but you get the idea.

The inconsistency here is so obvious it’s laughable. If Trump is an authoritarian, why would these journalists and politicians push for policies that concentrate the means of force into the hands of the federal government? With each federal law that erodes Second Amendment rights, anti-gun officials give Hitler, Jr., greater means to subjugate the American people.

Is Trump a Flash in the Pan?

Assuming these individuals aren’t simply, uh, mentally incapacitated, they might justify their contradictory positions in a few ways.

I’m sure many believe that Trump is a flash in the pan. The next election cycle will reinstate the kinder, gentler society we enjoyed under President Obama, and we’ll no longer have to worry about an abusive, overreaching federal government.

Putting aside Democratic candidates who hope to impose a massive, top-down restructuring of the American economy (like a dictator), the idea that Trump and his “deplorables” will fade into the sunset is anything but assured. A Democratic win by Bernie Sanders, Kamala Harris, or Joe Biden may even spark a more severe backlash than what we saw in 2016.

Leftists worry about this exact thing, which makes their anti-gun position even more absurd. Former Australian Prime Minister Kevin Rudd, for example, published an op-ed in the New York Times fretting about the rise of “authoritarian capitalism.” If we don’t fix serious flaws in our society, Rudd argues, we might be looking at Trump 2.0 in the very near future.

SEE ALSO: Democratic Rep: ‘Don’t Want to Give Up Your Guns? We’ll Nuke You!’

Leftist gun-banners might also argue that firearms won’t do much good against the threat of authoritarian regime posted by President Trump. We saw this line of thinking last November from California Rep. Eric Swalwell, who threatened to nuke those who resist federal power.

And it would be a short war my friend. The government has nukes. Too many of them. But they’re legit. I’m sure if we talked we could find common ground to protect our families and communities.

David Frum (mentioned above) posed a more nuanced version of this argument in his article outlining Trump’s authoritarian tendencies.

Those citizens who fantasize about defying tyranny from within fortified compounds have never understood how liberty is actually threatened in a modern bureaucratic state: not by diktat and violence, but by the slow, demoralizing process of corruption and deceit. And the way that liberty must be defended is not with amateur firearms, but with an unwearying insistence upon the honesty, integrity, and professionalism of American institutions and those who lead them.

He’s not wrong about one thing: modern tyranny often takes the form of bureaucratic overreach. What he forgets is the threat of physical violence that forms the foundation for that overreach. Resisting via proper legal channels is great… until it isn’t. What happens when the “modern bureaucratic state” becomes immune to peaceful protest or legal action? Those fortified compounds might start to look more appealing.

Take Venezuela, for example. We’re a long way from that disaster, but where will we be in 100 years? As we reported in December, some Venezuelans are beginning to understand how a once-popular civilian disarmament bill has allowed pro-regime paramilitary militias to run roughshod over unarmed citizens. Today’s government overreach may take the form of non-elected bureaucratic fiat, but that may not always be the case.

Don’t get me wrong. I’m not the one arguing we’re descending into a post-apocalyptic hellscape: leftist members of the anti-gun media are. But they’re also arguing, on the brink of this disaster, that we should give up our means of self-defense.

The inconsistency of these positions is, in my mind, the strongest evidence that these individuals are intentionally overstating the threat of Trump’s authoritarianism for attention or political gain. They’re trying to scare their base into action. If they truly believed the President capable of authoritarian takeover, they’d be much more hesitant to surrender the best means of defense against that takeover.