The full moon was bright enough to cast our shadows ahead of us, as my hunting partner, Darren Jones, and I hiked yet another Hill Country ranch road in search of hogs. Darren carried shooting sticks and an AR. I lugged along my night hunting rig, my right shoulder sore from the weight.

Lugged is the right word, and I had no one to blame but myself.

A couple of months earlier, Jones and I were on the phone talking about two of our favorite things–hunting and shooting. Jones told me about a friend with a ranch located in the Texas Hill Country north of San Antonio, and the guy was having problems with hogs and had given Jones an open invitation to come out and kill as many as he wanted.

But it would have to be a night hunt. The friend had shot at the hogs during the daytime so often, the wild porkers were pretty much nocturnal.

“I can get some night vision gear,” I said during the call.

“What are you going to use for a gun?” Jones asked.

“How about your new muzzleloader?”

Jones is not only a good friend but heads up hunting PR for SilencerCo, the country’s top producer of suppressors. Several months earlier, SilencerCo launched the first factory-produced muzzleloader built with an integrated suppressor, the Maxim 50. I had one for a review but hadn’t been able to hunt with it.

I contacted Night Optics USA http://nightoptics.com/ to see if they could lend me some hardware. They provided me with their Sentry 14 Night Vision Monocular; and, their Krystal 950 Brilliance Clip-on Night Vision Sight.
Bushnell supplied the scope—an Engage 2.5-10×44 http://bushnell.com. For bullets, I used Federal Ammunition’s 350-grain B.O.R. Locks. Like most muzzleloader bullets it’s not terribly aerodynamic, but they hit like sledgehammers and at the distances you shoot muzzleloaders are more than sufficient. 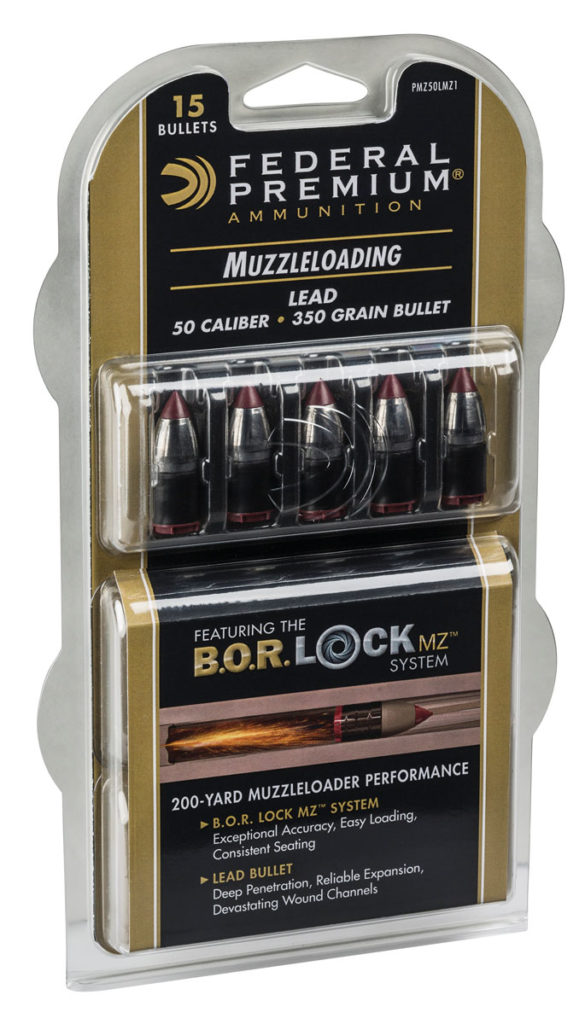 Jones provided the powder (I couldn’t bring mine as airline rules prohibit the transport of loose powder), Blackhorn 209. http://www.blackhorn209.com/

My airplane landed in San Antonio just at dusk. Jones picked me up and drove us to his friend’s ranch near Burnett. (Pronounced, “Burn-it, durn’it!” as locals will remind you.)  We arrived around 11 PM and tooled around for a couple hours on an ORV, checking out things. We saw a few deer and a raccoon, but no hogs.

Back at it mid-morning the next day, looking for hogs and scouting for places to hunt later. After a short mid-afternoon nap, Jones and I headed to a watering hole we’d found earlier, what Texans call a “tank” and guys like me from Wisconsin refer to as a “pond.” A couple hours before dark, we set up a hunting blind overlooking the tank and settled in. 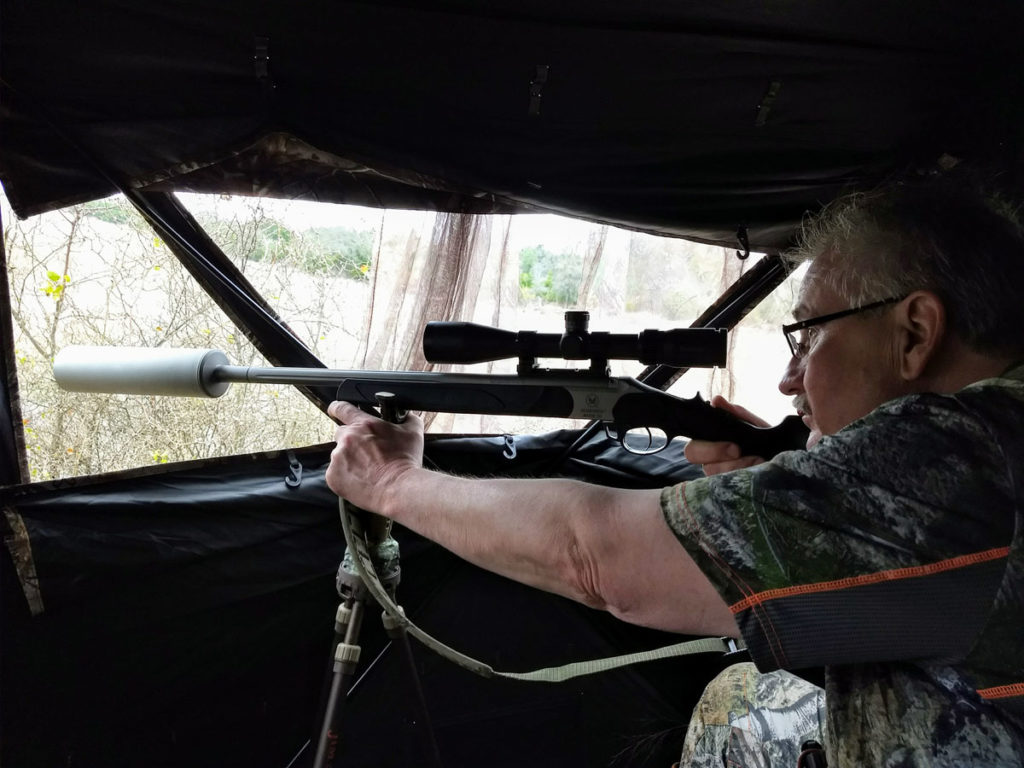 Hunting with the Maxim 50 from a blind while it was still light out.

Several little pigs appeared an hour before dark at the far end of the tank. Minutes later, two sows stepped out and trotted over to the little ones. They were about 70 yards away.

I lined up the Engage scope’s reticle on her low shoulder, let out my breath, waited a heartbeat and squeezed the trigger. The B.O.R. Lock bullet plowed into her with an audible “KA-whaaap!” She reared up and turned, a splotch of bright-red visible on her dark hide, and sprinted for the brush behind her. The other hogs scattered.

The sow didn’t make it far, though, the bullet smashing its way through-and-through; she bled out quickly. 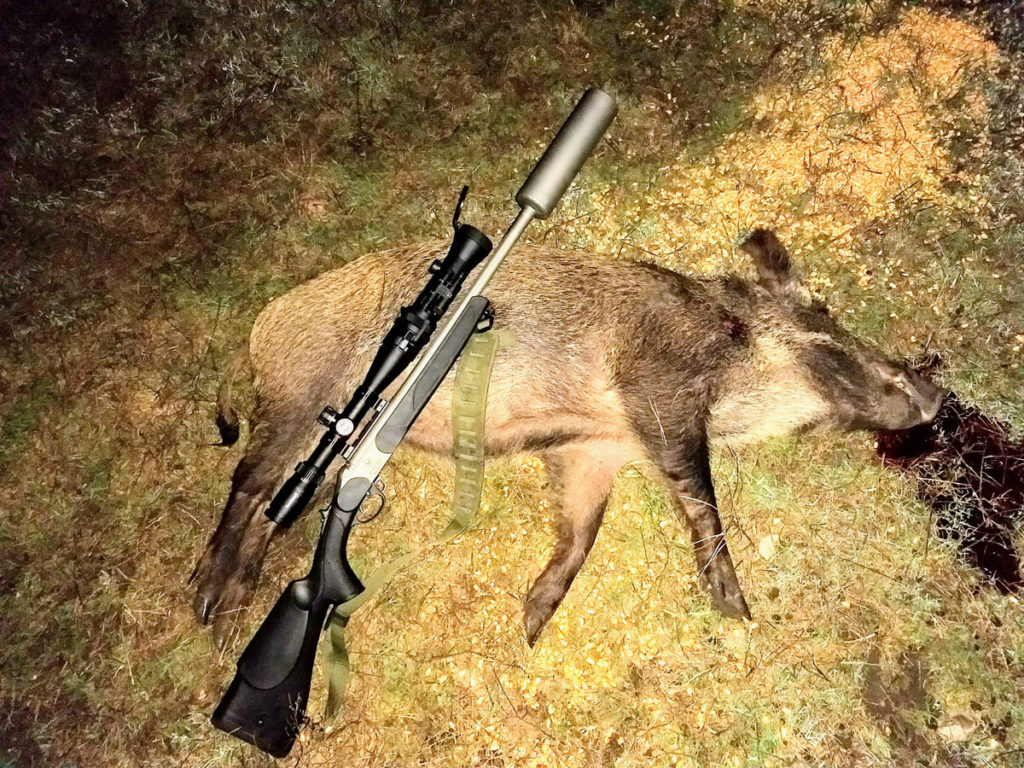 Jones and I hunkered back down into the blind after we found the sow. Darkness was forming under the mesquites lining the tank, so I attached the Krystal 950 clip on to the end of the Engage scope. Not five minutes later, two things happened almost simultaneously: the night came over us suddenly, as if God himself had flipped a switch; and I heard the loud squeal of pigs plural.

A sounder of 20 hogs sprinted in from my right and headed to the tank and the corn feeder behind it. I waited for a clear shot and took a mid-sized boar, the 350-grain bullet tipping him over in his tracks. 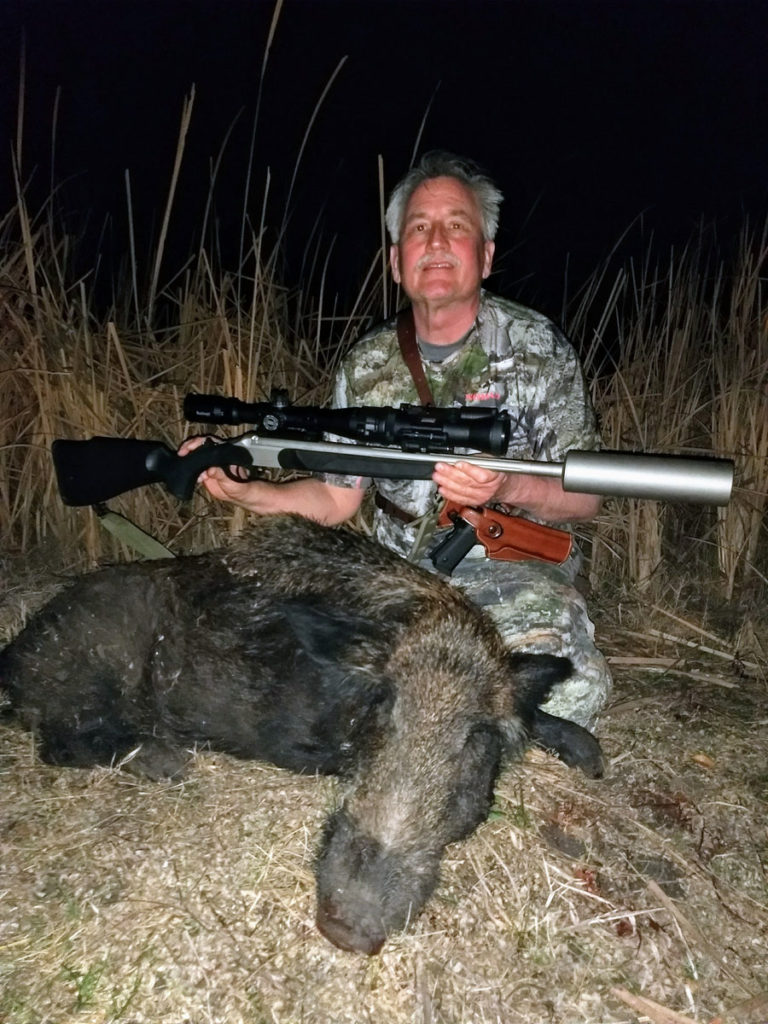 The next night, it seemed the word had gone out on the Wild Hog Grapevine: Night hunters! Careful!

We drove and scanned, scanned and walked, making a huge circle around the ranch. It was after midnight. I had a flight out of San Antonio in seven hours. But I wanted a triple.

We stood on a small rise several hundred yards from the previous night’s hunting spot near the tank. Using the Night Optics monocular, Jones spotted something moving near the tank, and we headed down in the very bright moonlight. We got close enough to see two hogs in the brush near the water’s edge. Jones set up the shooting sticks and I got the Maxim 50 ready.

At which point the wind, which had been in our faces, abruptly shifted from left to right.  One of the hogs gave an alarm squeal and the two just disappeared.

Jones and I looked at each other in the moonlight.

“Should we call it?” he asked. “Or try that feeder up beyond the cedars?”

“Feeder,” I said, although my body was telling me to head back to the ranch house.

We hiked a half-mile down a ranch road that wound through a large stand of cedars. At the point when the road made a sharp right, we stopped. A feeder sat several hundred yards ahead. Jones moved ahead to scout with the monocular and returned with the news: a half-dozen hogs on the corn.

We walked single file down the ranch road, slow. The wind was in our face again, for now. The road dropped down ahead of us, and I saw one large, low mesquite tree about midway between us and the hogs. We got to the tree easy enough, but then it was decision time.

We were close enough to hear the hogs grunting and jostling over the feeder corn, maybe 150 yards away to our right. The recommended powder load on the Maxim 50 is 100 grains. With the 350-grain B.O.R. Lock, at night, and me tired, I figured closer was better.

We crouched down and moved when the hogs had their backs to us, using scattered bushes for cover, pausing, waiting for the hogs to face away, then scooting to the next brushy spot.

We got to within 80 yards, and there was no cover left. Jones set up the Jim Shockey Tall Tripod sticks in the road, stepped away. I slid in behind the sticks, got the Maxim 50 in place, and took deep breaths to slow that nervous twitch pulsing through my arms.

One chance, I knew, no more.

The Krystal 950 Brilliance clip-on revealed the hogs clearly enough in a greenish light, including one decent-sized pig who kept shoving aside his smaller pals. The big guy was my target, but all he gave me was a rear-end shot.

And then that damn breeze began to shift from the front of my face to my left, the hogs were feeding to my right and downhill. I had my reticle on the hog’s rump, waiting. Just as I figured they were going to wind me, the bigger hog turned. Not broadside, but a good quartering shot.

I fired. The blast from the Maxim 50 obliterated my view for several seconds. Then, I saw glimpses of night-vision-green hogs evaporating into the brush. I swung the scope around, couldn’t see my hog, and swore at myself for being a loser of a hunter.

Then I saw a hog’s foot rise from the ground, kick the air and fall back.

He wasn’t huge, maybe 125 pounds; the B.O.R. Lock took him at the back of his right rib cage and drove on through to his left shoulder. Jones and I high-fived and gave each other the hunting buddies’ brief-but-manly hug. Then we got down to the business of field dressing the hog. 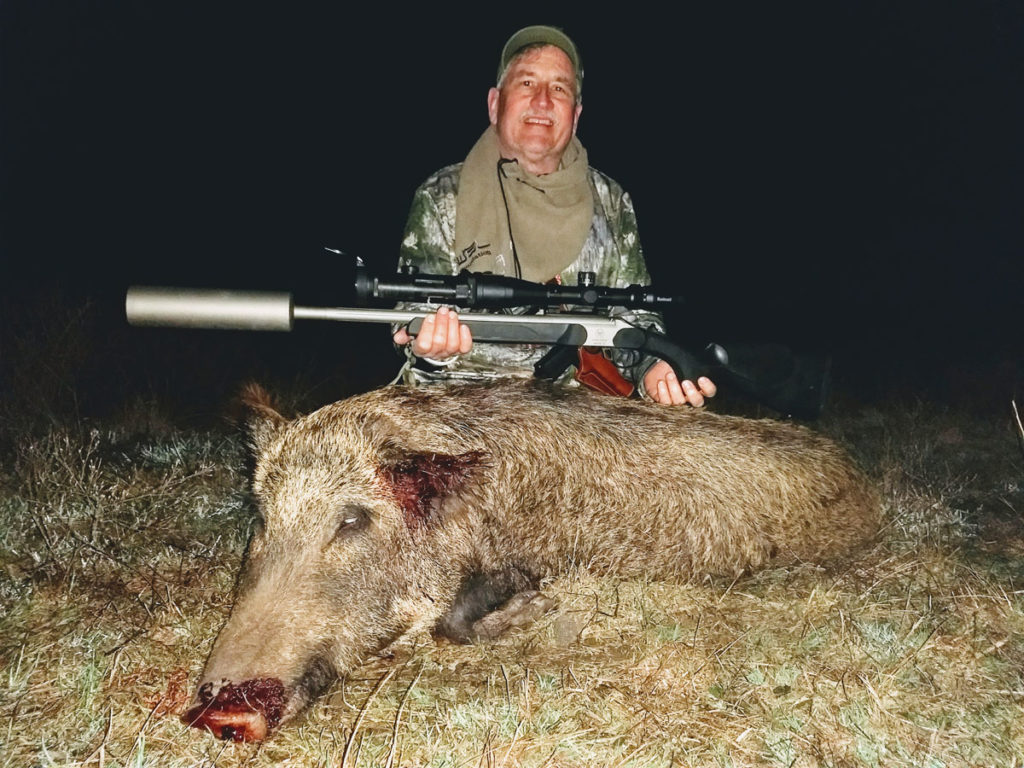 The last hog in the author’s “triple,” taken well after midnight.

We made it back to the ranch house about 3 AM. I packed, showered, and closed my eyes for less than two hours before we headed to the airport. I walked onto my plane sore and tired, my head aching, eyes dry and scratchy. Several rows behind me, a baby began to cry.

But it was all worth it. 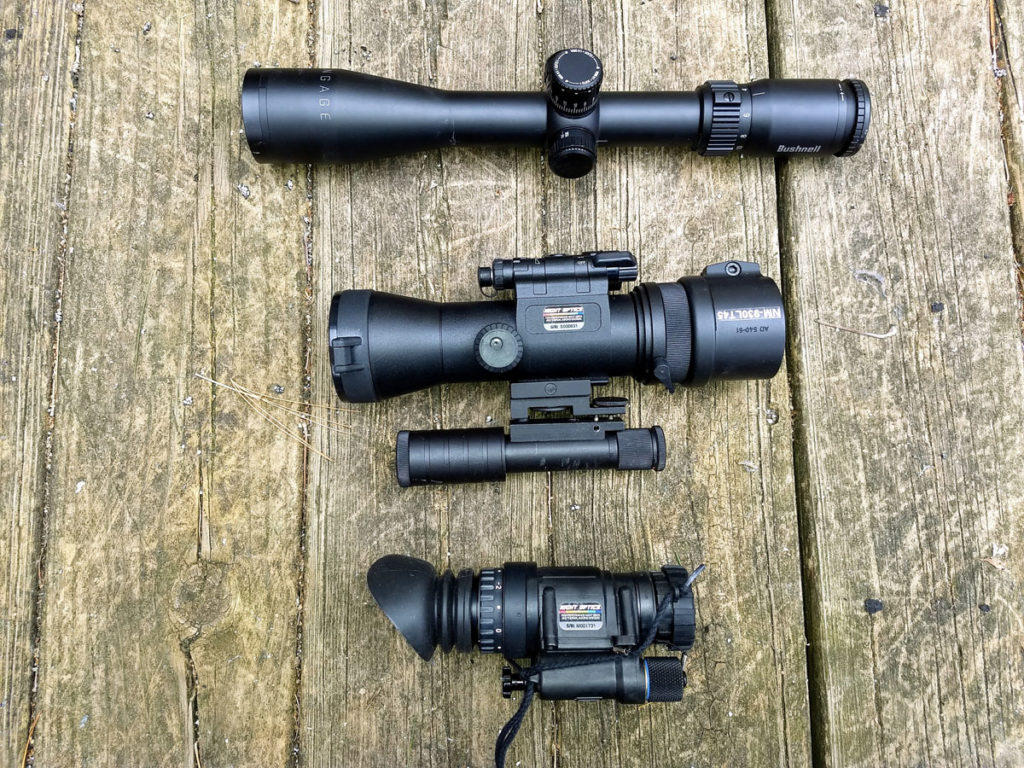 This hog hunt was the first time I used night vision gear from Night Optics U.S.A., and I was impressed by how well and easily the two units worked.

The Krystal 950 Brilliance 4 Gated Clip-on Night Vision Sight features a simple clip-on system to attach it to your day optic. The 1-15 magnification really lets you reach out into the night. The controls are simple to use, including the brightness and focus knobs, and the unit has a built-in integrated accessory/rail mount. It also has an IR laser for illumination, but I didn’t need to use it thanks to a full moon.

The Sentry 14 Night Vision Monocular was a damned handy spotter throughout the hunt. Lightweight, we hung it around our necks for easy access. Controls are minimal—on/off, focus and brightness—and I learned them in about 20 seconds. Battery life?  Exceptional. I inserted one new AA battery at the start of the hunt, and the unit ran for at least 12 hours on that battery—and had plenty of power left. 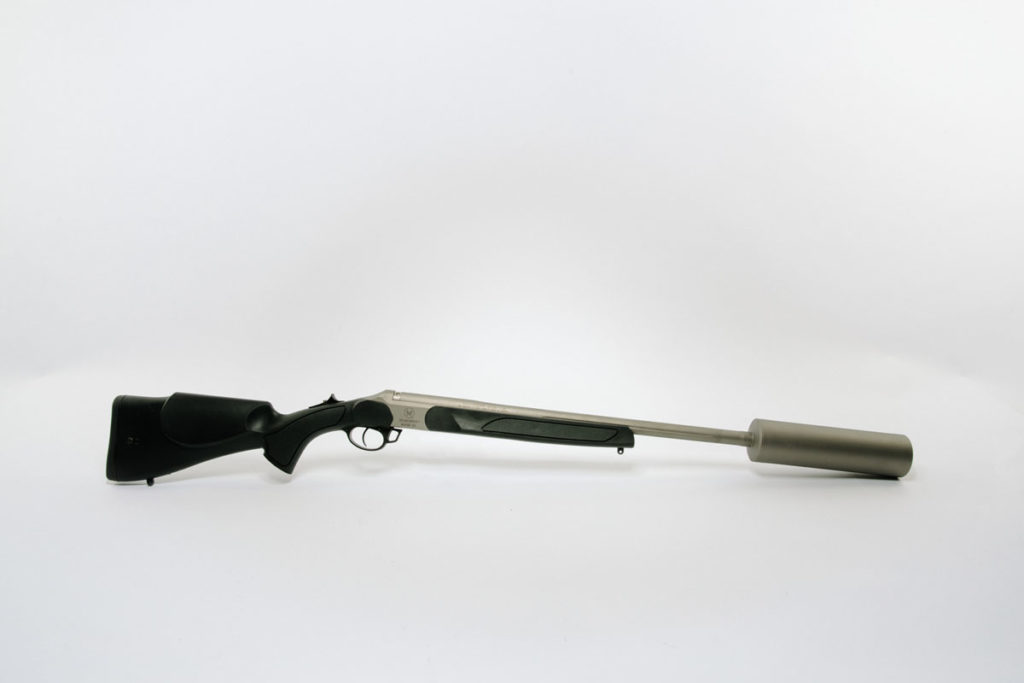 SilencerCo’s Maxim 50 is a Tradition’s Vortex in-line, .50 caliber muzzleloader with a SilencerCo suppressor welded onto the end of the barrel–though SilencerCo terms the suppressor a “moderator.” The rifle’s recommended load is no more than 100 grains of powder, making this what I consider a 200-yard deer rifle when using lighter (270- and 250-grian) bullets.

I shot the Maxim 50 dozens of times without hearing protection; no buzzing or plugged feel in my ears resulted. The suppressor does a great job of containing most of the smoke, too, so you can see what’s happening after the shot. (Unless you’re using night vision; then, the relatively small amount of smoke does obscure your night vision for a few seconds).
Maxim 50 recoil is very manageable. I’d rate it as less than a .308 Win bolt. I pegged two-inch and frequently smaller groups with the rifle at 100 yards, using a variety of 250-, 270- and 350-grain bullets. The rifle’s a bit front heavy, but not as much as you might think. Overall length, 45-inches and weighs 7.6 pounds unloaded. Sold without sights, but is drilled and tapped for optics.

Given that a muzzleloader is an “antique firearm” under federal regulations, and the suppressor is permanently attached to the barrel, you don’t need a $200 ATF tax stamp to buy the Maxim 50. No wait time, either. That said, a handful of states (including California and New Jersey), prohibit the sale of the Maxim 50. The SilencerCo website has a complete list. 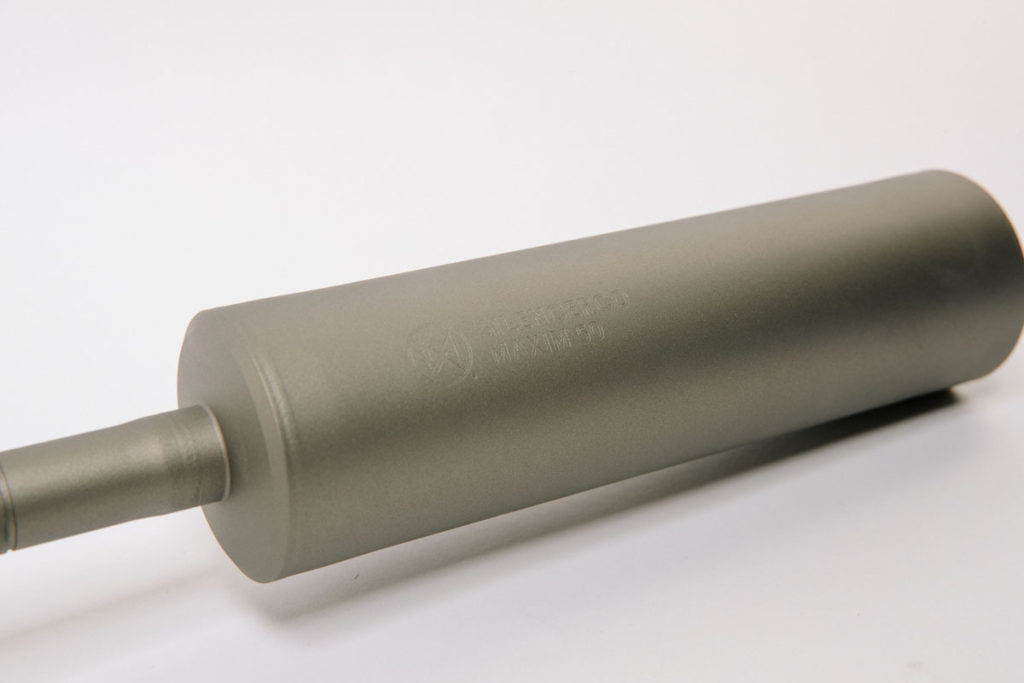 The Maxim 50’s suppressor/moderator is welded onto the end of the rifle’s barrel. No need for a $200 ATF tax stamp!