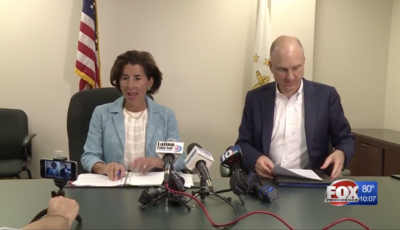 The ruling class in Rhode Island this week banned guns in public schools with the exception of law enforcement.

“As we start a new school year, our students cannot wait a minute longer for the General Assembly to take action on the Safe Schools Act,” she continued. “The Rhode Island Department of Education has issued a binding directive to every school district that immediately bans firearms from our kids’ schools.”

In other words, instead of allowing government to function the way it’s supposed to, with lawmakers making the laws, Raimondo enacted an order by executive fiat.

This directive comes in response to uncertainty among education leaders and members of the community, and a lack of consistent practice across district lines. https://t.co/2UqWDHdOvw

Wagner backed up that play by suggesting there was some sort of confusion about the existing law.

“It’s our job to protect kids and their teachers,” said Wagner. “Inconsistencies among laws, regulations, and local policies and practices create confusion, producing the exact kind of unsafe environment the law is intended to prevent. As we start a new school year, this directive provides clarity, until such time that the underlying laws are reconciled.”

There was no confusion about the law. Concealed carriers were allowed to bring firearms into public schools. Plain and simple. Raimondo and Wagner just wanted to put a stop to that. The question is why? Because if it’s really about protecting kids and teachers then they have it all wrong. They should ban cops before they ban concealed carriers. Seriously.

Research shows that when compared to cops, concealed carriers commit fewer homicides, firearms violations, misdemeanor and felony offenses.  Concealed carries are more law-abiding than cops and are convicted at a lower rate. The question can be asked, then, who presents more of a threat to “the children”? The average cop or the average concealed carry?

Please, I’m not suggesting that law enforcement and armed student resource officers don’t belong in schools. Just pointing out that this assumption by government that all cops are White Knights has real limitations. When you break it down the truth is that Raimondo and Wagner aren’t against guns in schools, they’re just against armed citizens having guns in schools. And based on data and what we know about concealed-carry culture that position doesn’t hold water, especially if one accepts that armed resistance is the best way to foil a would-be killer.  What they need to recognize is that cops are not the only good guys with guns, they’re not the only ones willing and capable of confronting an armed attacker.

Suppose a young Rhode Island mother has a concealed carry permit because her crazy ex physically abused her and her son. When she goes to pick up her son from school, that crazy ex now knows that she is unarmed. She is vulnerable. What’s stopping him from attacking her in the parking lot?  The cop that’s way inside the building?  As they say, when seconds count…

Anyways, what’s not clear, at least at this point, is the penalty for those concealed carriers caught violating Raimondo’s order. I reached out to her office for clarification. We’ll see if she responds.

Next post: California Bowhunter Mauled by Bear in San Bernardino Made Costly Mistake