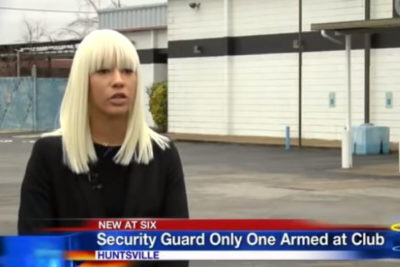 The guard didn’t hesitate to act when she saw a man advancing towards the club with an AK-47. (Photo: WAAy31 Screen Shot)

In what could have been a tragic reenactment of the massacre that took place at an Orlando nightclub in 2016, a security guard in Huntsville, AL, shot and subdued a would-be killer before he could injure anyone at a local nightclub.

“As he tried to go towards the door… that’s where I had to go ahead and put him down,” the guard, who gave her name as Latoya, told local media.

Latoya explained that the suspect, 33-year-old Samuel Demario Williams, had been involved in an argument in the club, and security personnel had escorted him outside. That’s when he grabbed an AK-47 from his car and began firing.

“He started to make moves towards the door he still was firing off shots,” Latoya said.

The guard shot Williams at least once, in the leg, and then helped treat his wounds.

“I’m not here to kill anyone,” she said. “I saw one of the entry wounds was on his thigh which can sometimes be a somewhat dangerous place to bleed out. I keep a trauma kit and tourniquet on me as everyone who carries a gun should.”

“Thankfully, he is still alive today,” she added. “One day he is going to have the opportunity to make better choices.”

Williams was released on bond after being charged with shooting into an unoccupied vehicle, possession of a firearm by a prohibited person, menacing, and reckless endangerment. He was the only person injured.

The incident took place at 3208 Club in Huntsville during a New Year’s Eve party. Headlining the event was rapper Boosie BadAzz, who witnessed the incident and urged his fans on Instagram to “learn how to fucking act at my show.”

While the national mainstream media can be counted upon for wall-to-wall coverage of successful massacres, no large outlets have picked up this story beyond rap and gun-related publications.

Police say the investigation is still ongoing, and local media reports that authorities are seeking to question two women in relation to the incident, both of whom have been charged with “tampering with physical evidence.”

Next post: Colt’s King Cobra is Making a Comeback

Previous post: Get a Fire Started in 3…2…1 – Testing the Options