Anthropoid: “Having the form of a human.”

What would you call the operation to kill the evilest man on the planet? If you are the British Special Operations Executive in late 1941 you call it Operation Anthropoid. The target of this top-secret direct action mission was Reinhard Heydrich. Heydrich might not have been the most repugnant human being who ever lived, but he was likely in the top five. Given the rarefied nature of his competition that is a remarkable accomplishment. 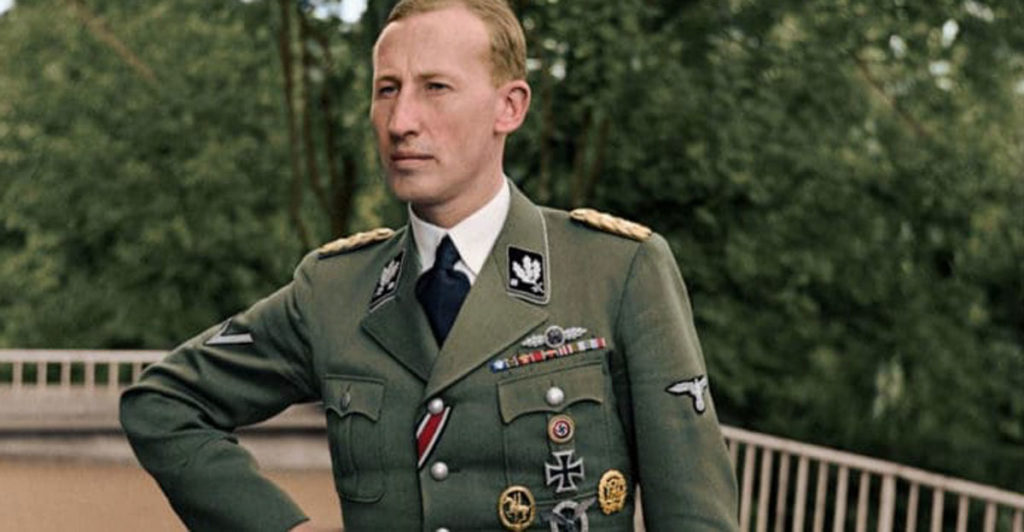 Reinhard Heydrich might not have been the most repugnant human being who ever lived, but he was likely in the top five. The Father of the Holocaust, Heydrich was ultimately assassinated by Czech operatives trained by the British SOE. 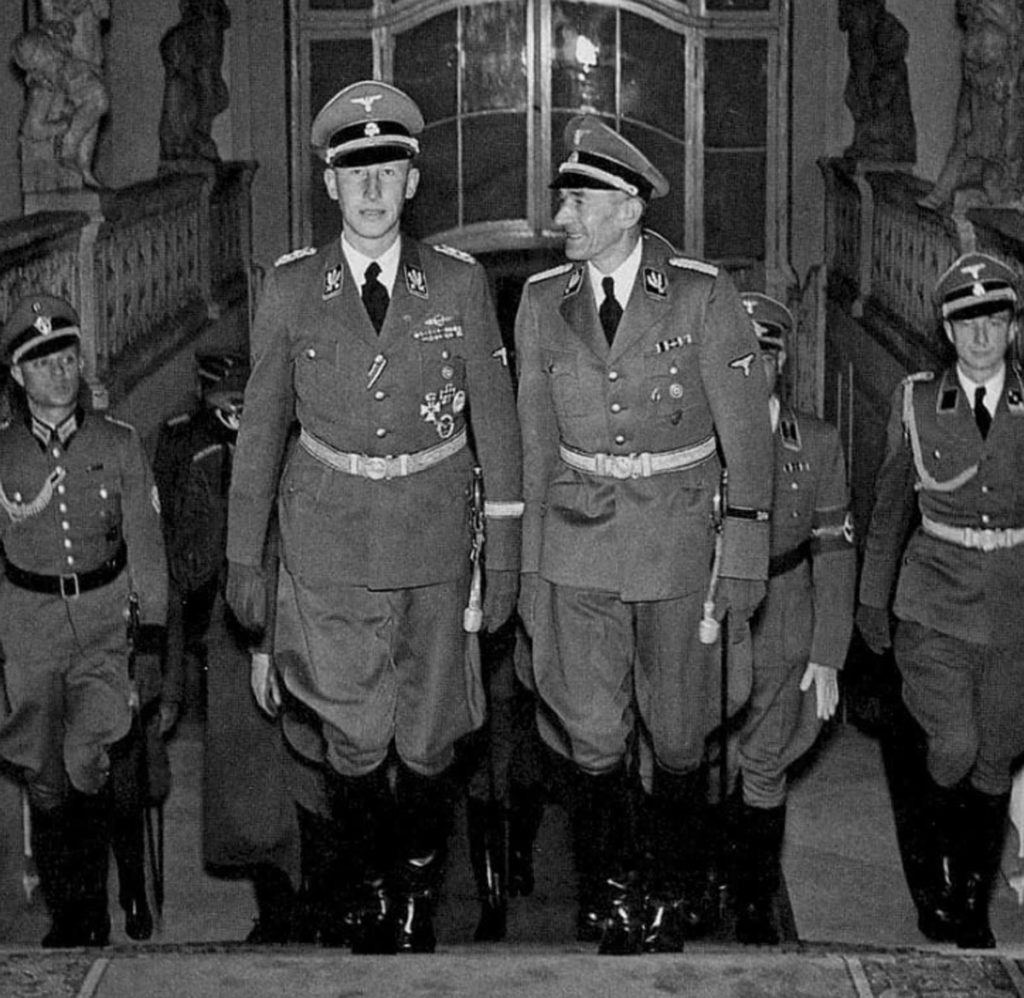 Obergruppenfuhrer Reinhard Heydrich was an officer in the Nazi Schutzstaffel or SS. The SS arose from Adolf Hitler’s personal bodyguard and went on to field combat divisions as well as manage the day-to-day operations of the sundry extermination camps. Heydrich was the head of the Reich Main Security Office (RSHA) and the architect of the Final Solution. Reinhard Heydrich was the father of the Holocaust. Sporting archetypal Aryan features, Heydrich was the Nazi Hitler wished he could have been. As a result of his brutal efficiency, Heydrich was known as the Butcher of Prague, the hangman, and the Blonde Beast.

At the time of his assassination, Heydrich was the acting Reichprotektor of the Protectorate of Bohemia and Moravia and one of the most powerful men in Nazi Germany. Reinhard Heydrich was a psychopath’s psychopath. To Heydrich the mass murder of millions was not an issue of passion but rather of reason. Heydrich tried to exterminate entire people groups because he thought it was the right thing to do. For this, it was determined that he must die.

Jan Kubis and Jozef Gabcik were selected from among around 2,000 Czech soldiers in exile and aggressively trained in commando techniques by the British. The plan was to attack Heydrich’s convertible Mercedes limousine with Sten submachine guns and antitank grenades. Heydrich rode about occupied Czechoslovakia with an SS driver and typically kept the top down on his automobile to demonstrate his confidence in the German forces under his command. In addition to being a soul-less monster, Heydrich was also terminally arrogant.

The ambush point was a tight curve along a deserted stretch of road that demanded that Heydrich’s driver, Oberscharfuhrer Klein, slow down markedly. When the moment was right Jozef Gabcik stepped into the road, leveled his Sten gun, and squeezed the trigger. The Sten jammed without firing a round. 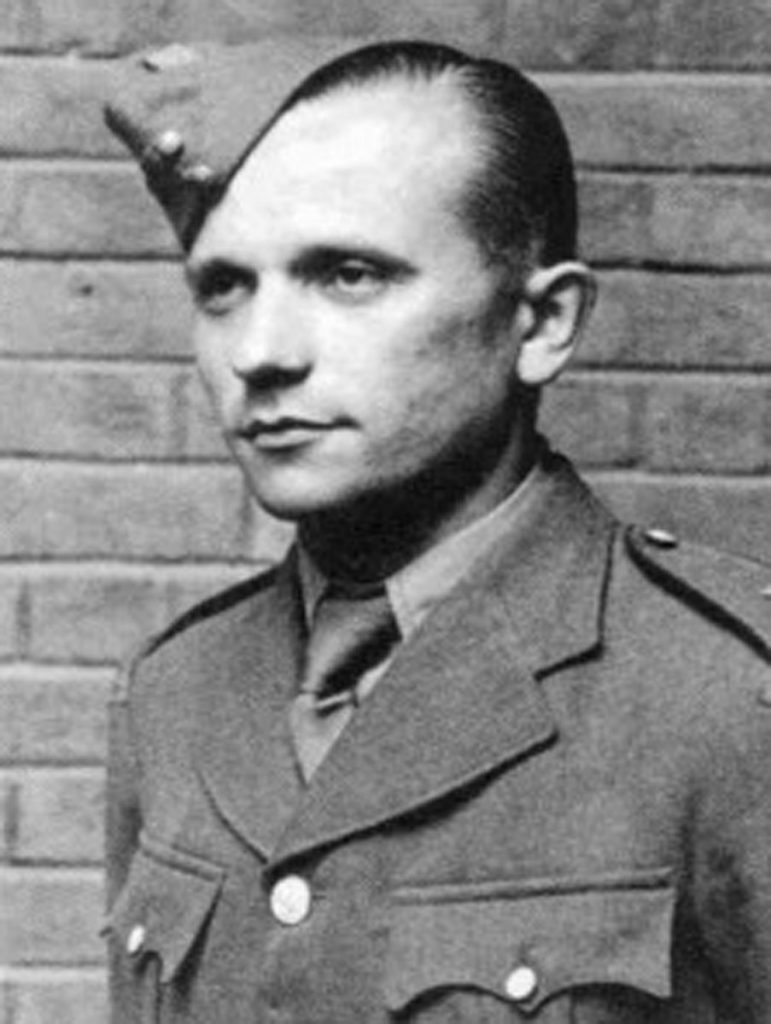 Jozef Gabcik initiated the ambush of Reinhard Heydrich by stepping out in the roadway and attempting to fire his Sten gun. The weapon jammed at the most inopportune moment and did not fire a round.

At this point, Heydrich could have directed his driver to press on through the kill zone and lived to slaughter another day. Instead, he told Klein to stop the car and proceeded to attempt to shoot Gabcik with his Luger sidearm. At that point Jan Kubis deployed his antitank grenade, detonating it against the outside fender of the vehicle and spraying Heydrich with shrapnel. In the subsequent engagement, Gabcik and Kubis opened fire with their Colt M1903 pistols, hitting Klein twice. The two Czech assassins escaped. 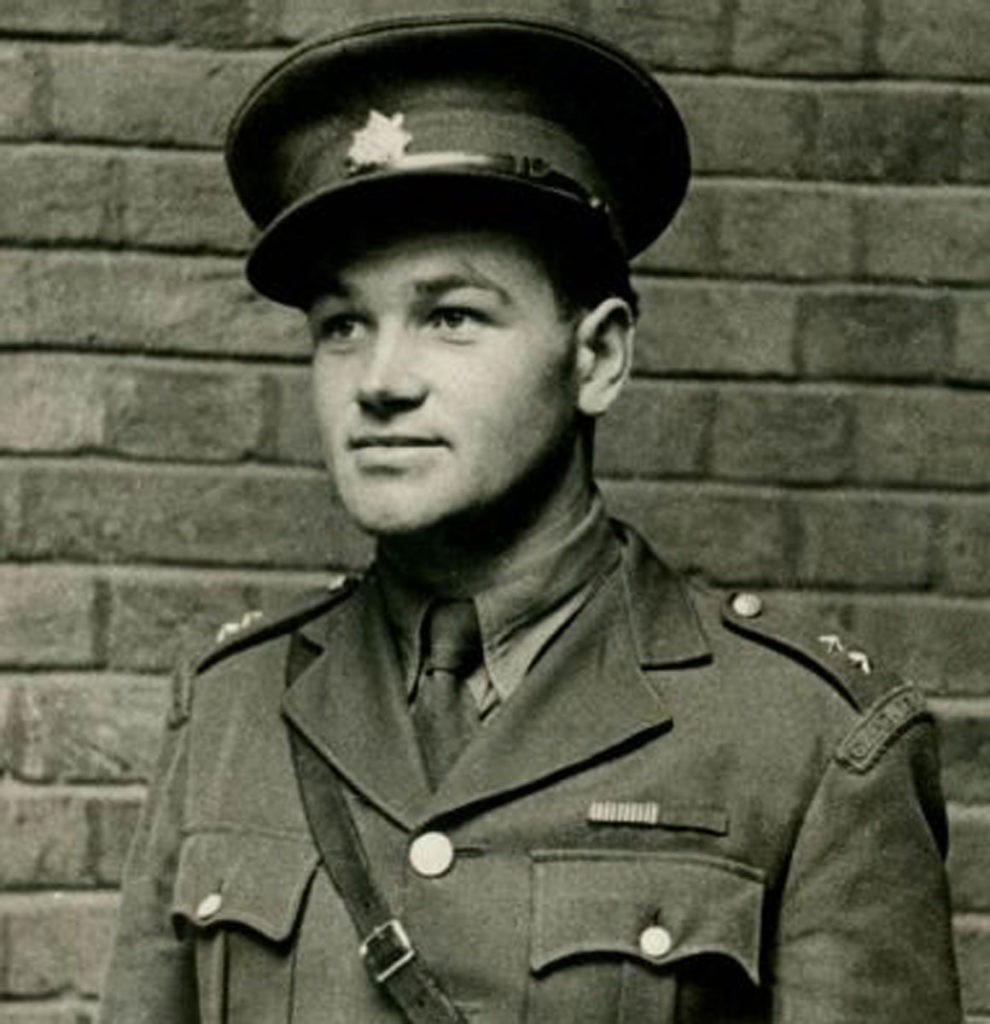 Jan Kubis deployed an antitank grenade against the fender of Heydrich’s armored Mercedes that sprayed the Aryan monster with shrapnel. These wounds ultimately killed him. 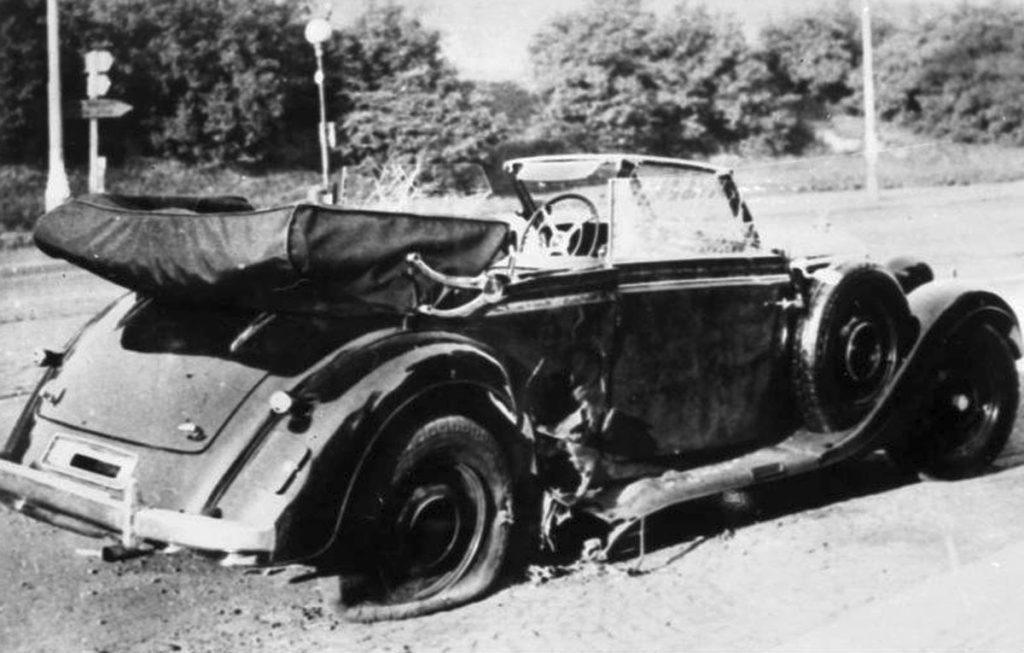 Heydrich’s armored Mercedes absorbed most of the blast from Kubis’ antitank grenade. However, fragments from the grenade severely injured Heydrich and eventually led to his death.

Heydrich was evacuated to a local hospital and ultimately received the finest health care available in the world at the time. He had suffered severe injuries to his lung, spleen, and diaphragm from grenade splinters along with a rib fracture. After several surgeries, his condition seemed to be improving. Then, seven days after the attack, Reinhard Heydrich collapsed over a meal, became comatose, and died. The working theory was that horsehair and fragments of upholstery from his car had been pressed into his wounds, suppurated, and killed him. Regardless, Heydrich was finally in hell where he belonged.

Gabcik and Kubis were cornered in a church and besieged by 750 enraged SS troops. Despite being armed solely with handguns and subjected to both tear gas and flooding in an effort to get them out of the building, they killed some 14 SS troopers and injured another 21 before committing suicide. The Germans ultimately massacred around 5,000 Czech civilians in retribution. They also leveled the villages of Lidice and Lezaky, killing their inhabitants regardless of age or gender and spreading salt in the earth where the towns had been. Operation Anthropoid was the only successful government-organized assassination attempt of the war.

The Sten was a crudely made expedient design that was easy to produce in quantity. More than 4 million copies rolled off the lines before production ceased.

As I searched for combat anecdotes about the Sten gun the two most prominent, the killing of Reinhard Heydrich and the execution of Benito Mussolini, both involved the Sten gun’s failure to fire at a critical time. Heydrich was killed with an antitank grenade while Mussolini was subsequently finished off with a French MAS 38 submachine gun. Though there were four million copies of the Sten gun produced during its production cycle, they were all hampered by the gun’s flawed double stack, single feed magazine.

The Sten draws its name from the initials of its designers, Major Reginald Shepherd and Harold Turpin, combined with the EN from Enfield. Faced with a critical shortage of small arms after the miraculous evacuation of most of the British Expeditionary Force from the beaches at Dunkirk, the Sten was designed to be cheap and quick to manufacture using the simplest of decentralized facilities. The most basic versions had only 47 parts that were subcontracted to small workshops around the country.

The Sten progressed through several Marks. The Mark II included a rotating magazine housing that could be turned such that it occluded the ejection port for storage or portage through filthy spaces. The Mk III was the simplest variant wherein the magazine housing was simply welded in place. The Mk V included a forward handgrip as well as the sights from a No 4 Enfield rifle and a bayonet lug. The Mk IIS was the first sound suppressed submachine gun to see series production. All Marks were selective fire and fired from the open bolt. 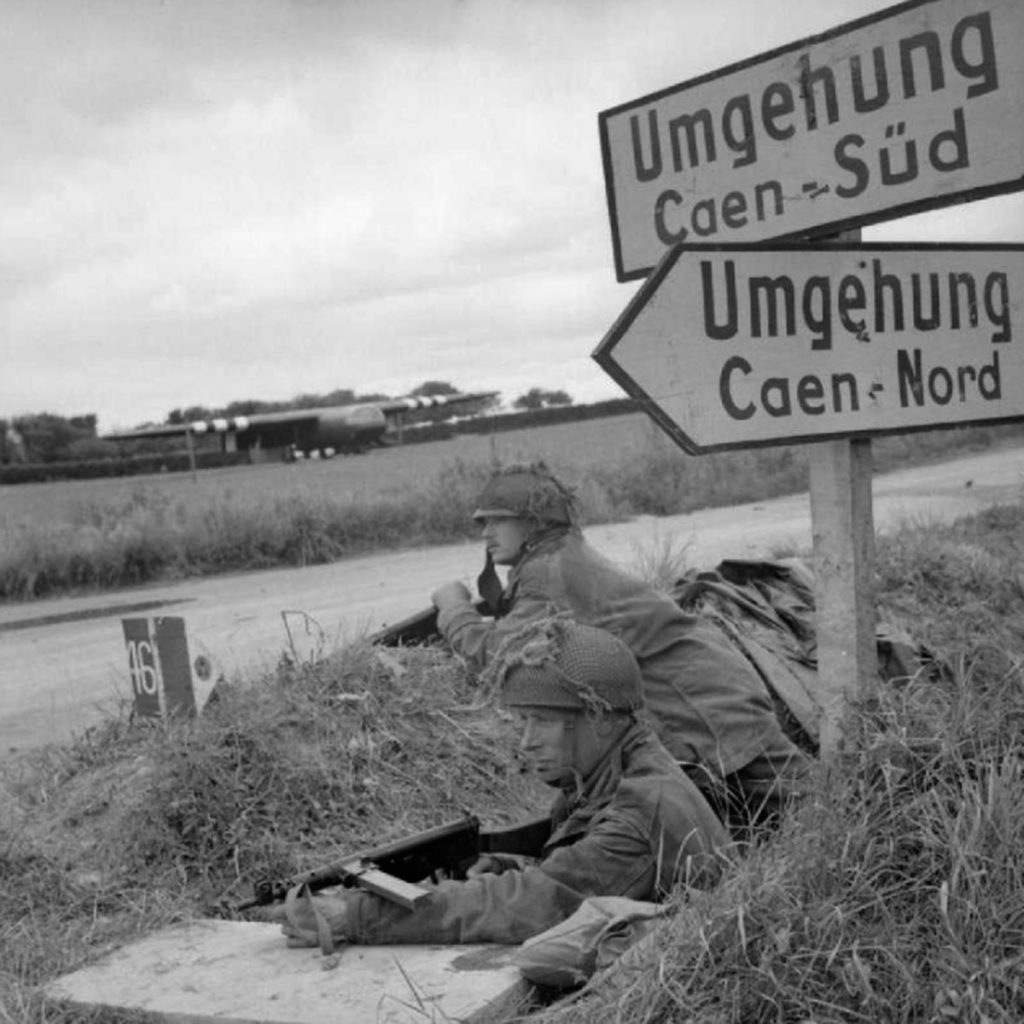 The Sten gun went on to arm British and Commonwealth troops in all theaters of World War 2. The gun would break down into smaller components and was air dropped to resistance fighters across Europe. 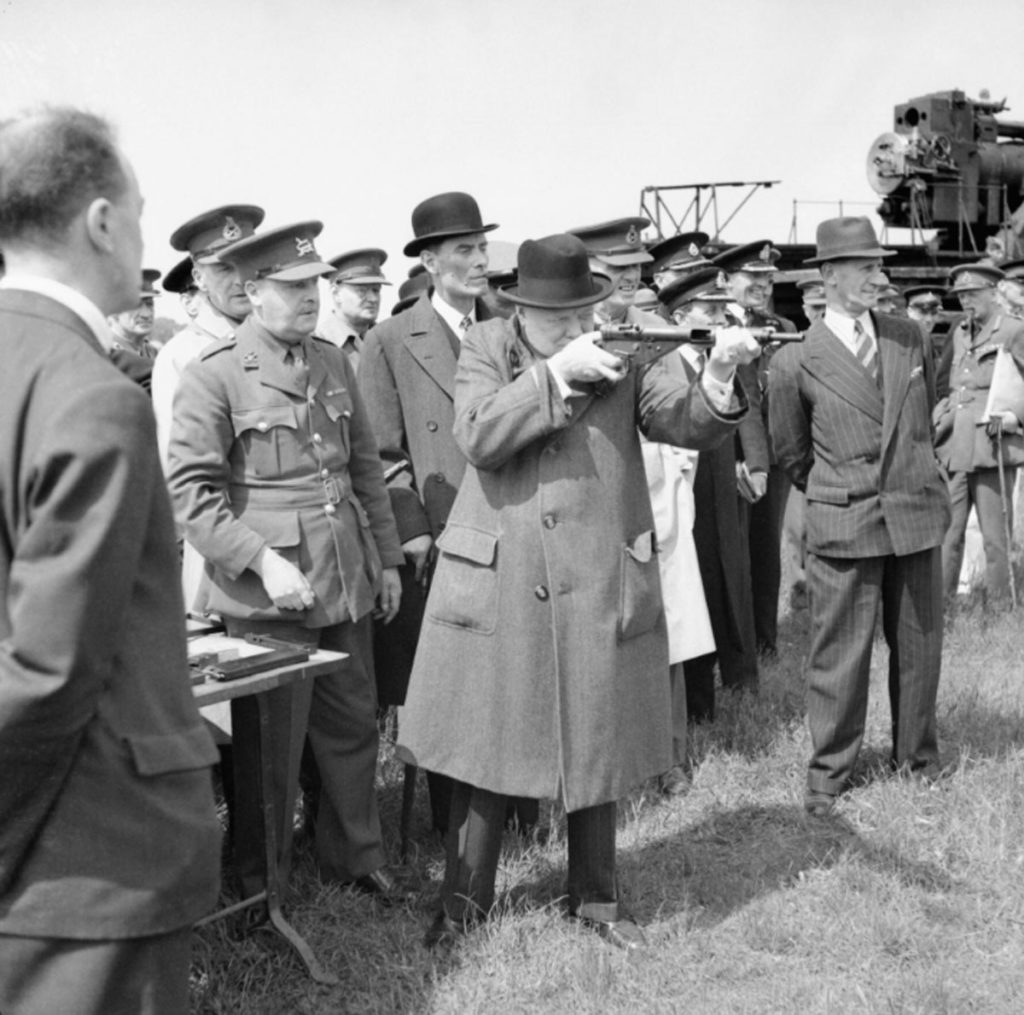 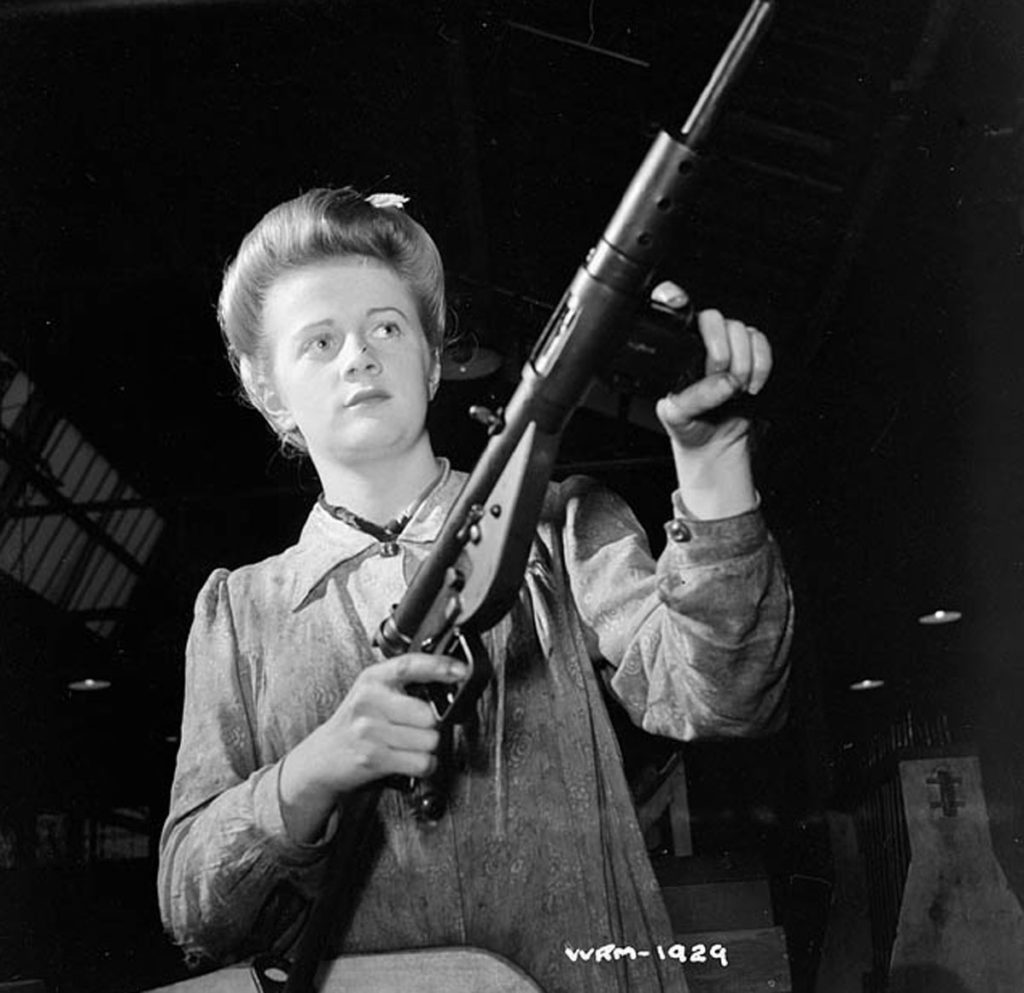 The simplest Sten used only 47 parts. Component manufacture was decentralized in small shops around the country. 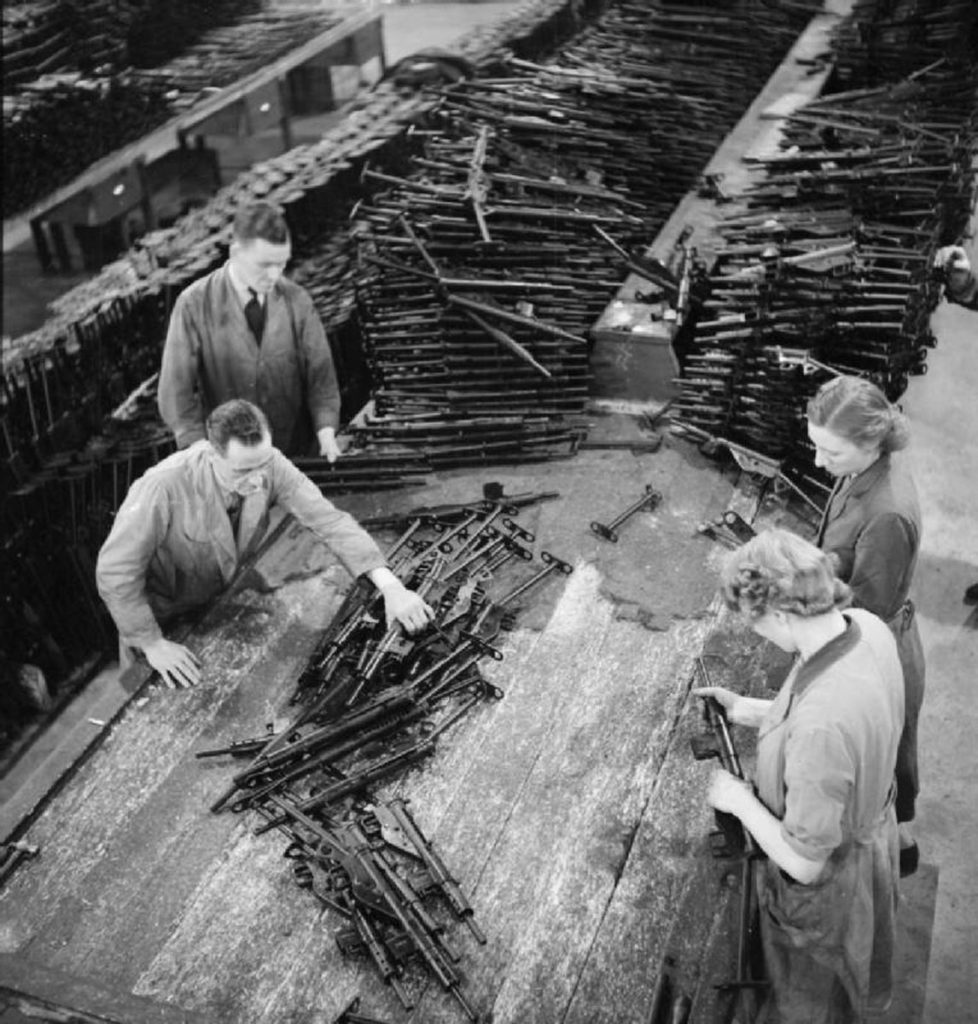 Buttstocks included a pressed steel loop version, a wooden rifle-like variant, and a miserably cheap T-shaped tubular steel variation that was just wretched to shoot. Sights on the early marks were welded in place and not adjustable in the least. The Mk II Sten broke down readily into either two or three smaller parcels and was subsequently widely used by underground fighters in the occupied territories during World War 2. In 1942 a Sten gun cost the British government about $10. That equates out to around $ 159 today. 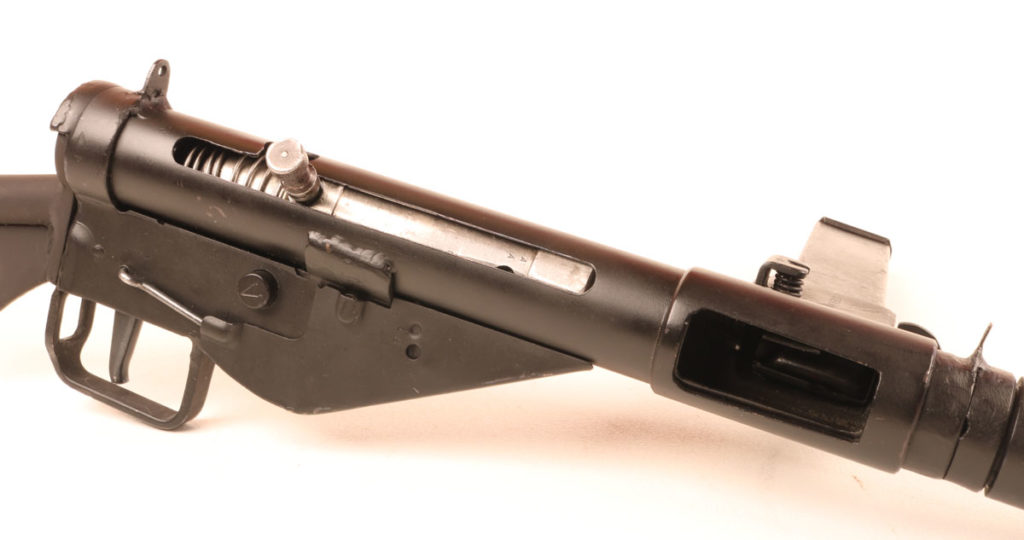 All military Sten guns fired from the open bolt via Advanced Primer Ignition.

Sten guns saw limited service in the Vietnam War. A Sten was used to assassinate Indira Gandhi in 1984. Her assassin emptied a full thirty rounds out of his Sten at point blank range, striking her twenty-seven times.

The Sten enjoys a remarkably sedate rate of fire, around 500 rounds per minute cyclic, and it is unusually controllable as a result. Particularly in its later Mk V versions with some proper furniture, it is a comfortable and effective close range weapon. Those wretched magazines are a pain to load without a tool and represent the source of the vast majority of the failures of the gun in action, but it is otherwise a well-reasoned combat implement. 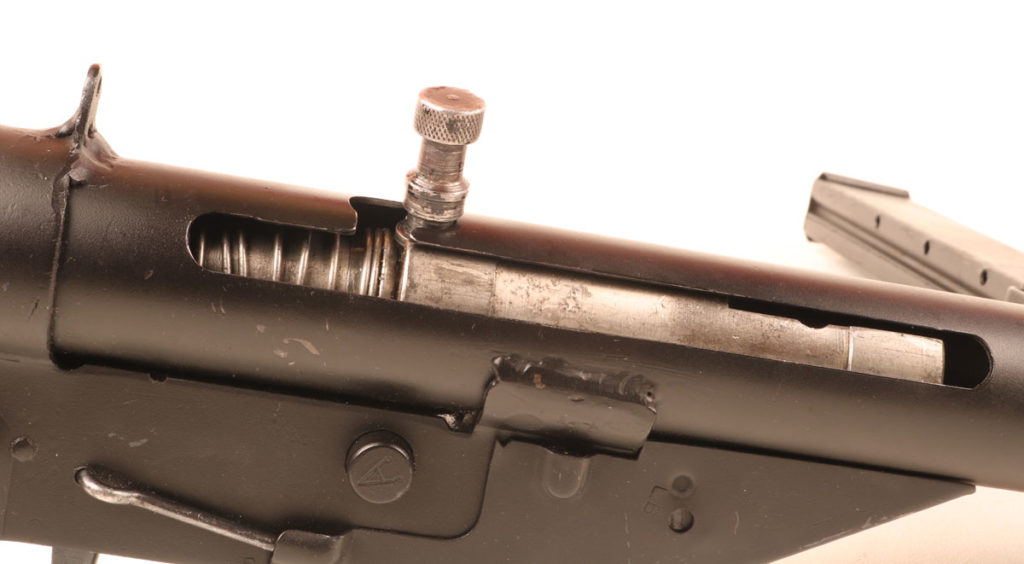 The Sten’s sole safety mechanism is a notch that safely locks the bolt to the rear. 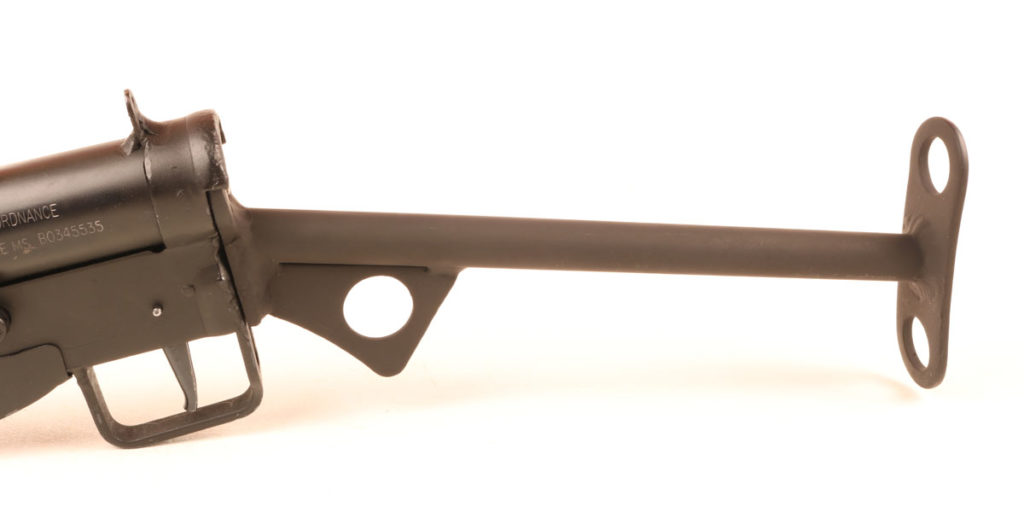 The simplest Sten buttstock is this wretched welded steel contraption. It is miserable in practical use. 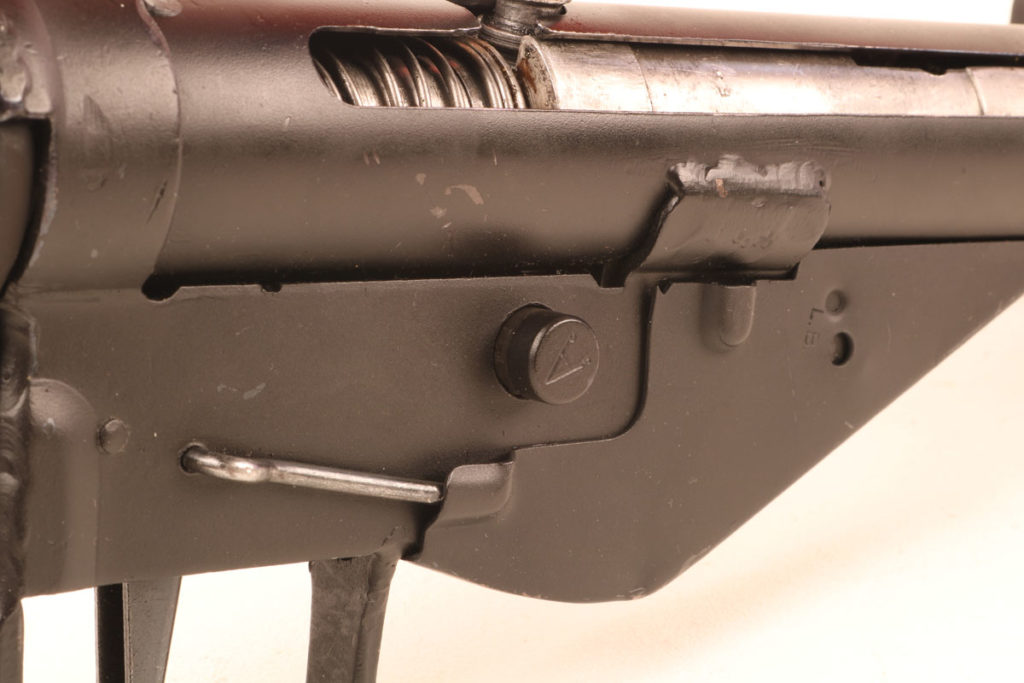 Despite the relative crudity of the design, the Sten included a select-fire feature. Fire selection was achieved by pressing this button to one side or the other.

The heavy bolt slamming home detracts from accuracy, but the sights are welded in place so it doesn’t really make that much difference. How accurate the gun might be is a function of who was welding the sights on that day. I find it easier to simply sight grossly above the gun and keep my bursts to modest lengths.

Recoil and muzzle climb are unremarkable, and the Sten is exceptionally controllable with only the most rudimentary attention to technique. Magazine housings are typically tight, but the charging handle is easily accessed. The sole safety consists of a notch cut in the bolt raceway that will keep the gun locked open if needed. To reload the piece you lock the bolt back over the sear, swap out magazines, and squeeze. 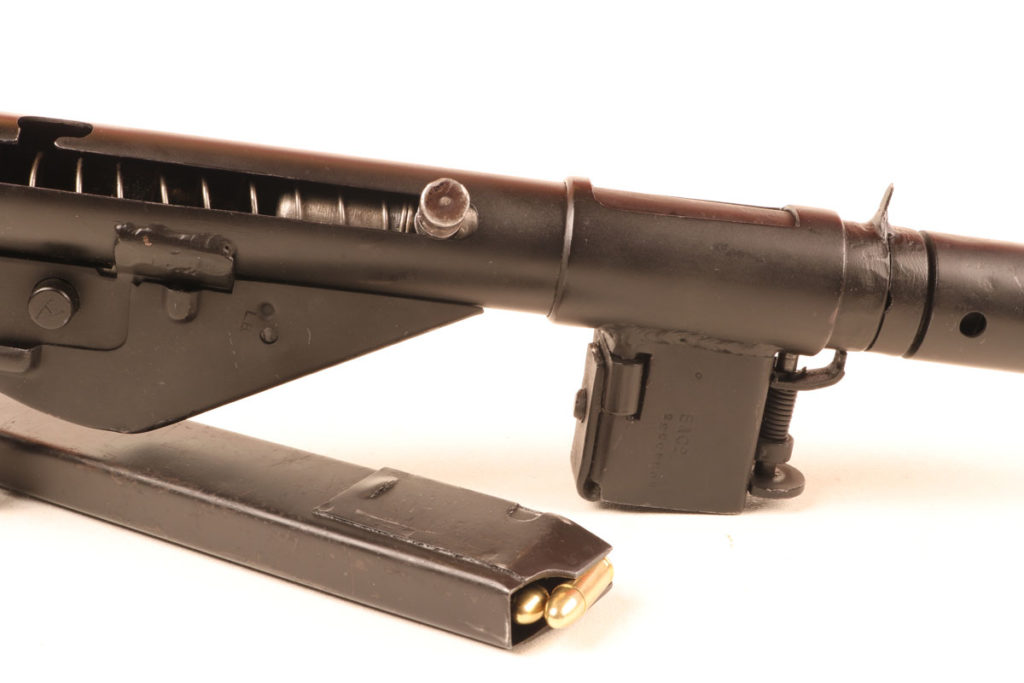 Mk II Stens featured a rotating magazine housing that could be pivoted around to seal the ejection port against dirt and grime. 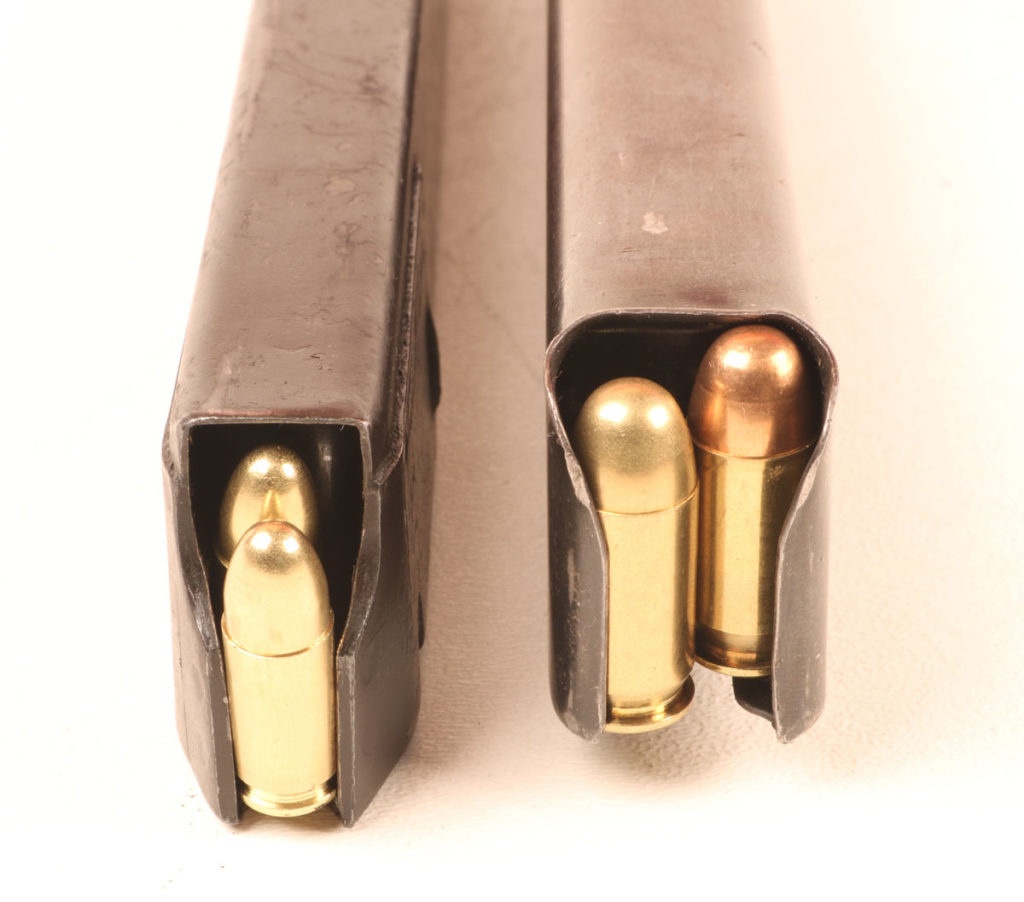 The Sten gun’s primary weakness was its sordid double column, single feed magazine. Shown here on the left alongside a double column, double feed Thompson magazine, the Sten magazine was the source of most of the gun’s reliability problems.

At the very end of the war a desperate Germany even produced a crude copy of the Sten called the MP3008. This gun fed from the bottom via MP40 magazines.

The Sten magazine is indeed awful, but the rest of the gun is surprisingly efficient. The gun’s focus on economy above combat efficiency is reflective of the utilitarian English constitution in a crisis. The very fact that the world now knew it was possible to build a truly cost-effective submachine gun changed the way that we crafted armaments. The Germans even produced a last-ditch copy of the Sten at the end of the war called the MP3008 that fed from MP40 magazines.

Military weapons typically spare no expense these days, but that was not always the case. It is a tribute to Masters Shepherd and Turpin that they could under such austere circumstances craft a submachine gun that was as effective as the Sten. Crude, cheap, occasionally unreliable, and bug ugly, the Sten gun nevertheless soldiered on for decades. It also played a very small part in ridding the world of one of the evilest men who ever drew breath.

***Shop GunsAmerica for your next historic firearm***