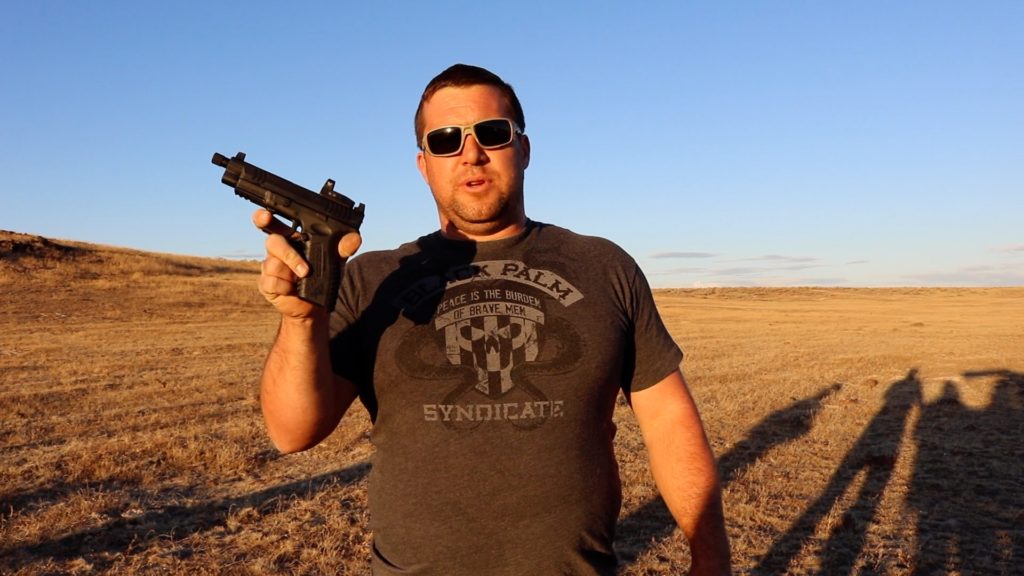 Many times in our industry, we see improvement that isn’t real improvement. I hate to say a lot of what we see is snake oil and nonsense, but it is. We have seen some real gains in rifle ammunition over the last few years, as well as things like ballistic computers, metallurgy in barrels, and red dots. Meanwhile, we have also been sold 57 flavors of rail attachment, no less than 3 rail attachment systems to go with them, and enough new magic lubricants to sink a battle ship.

One place we have seen some improvement, but nothing earth shaking, is hand gun bullets. Hollow points today ARE better than the previous versions, but actually aren’t all that different than jacketed defensive rounds from the 60’s.

Well, today we see bullets worthy of the year, from a new company called G9. 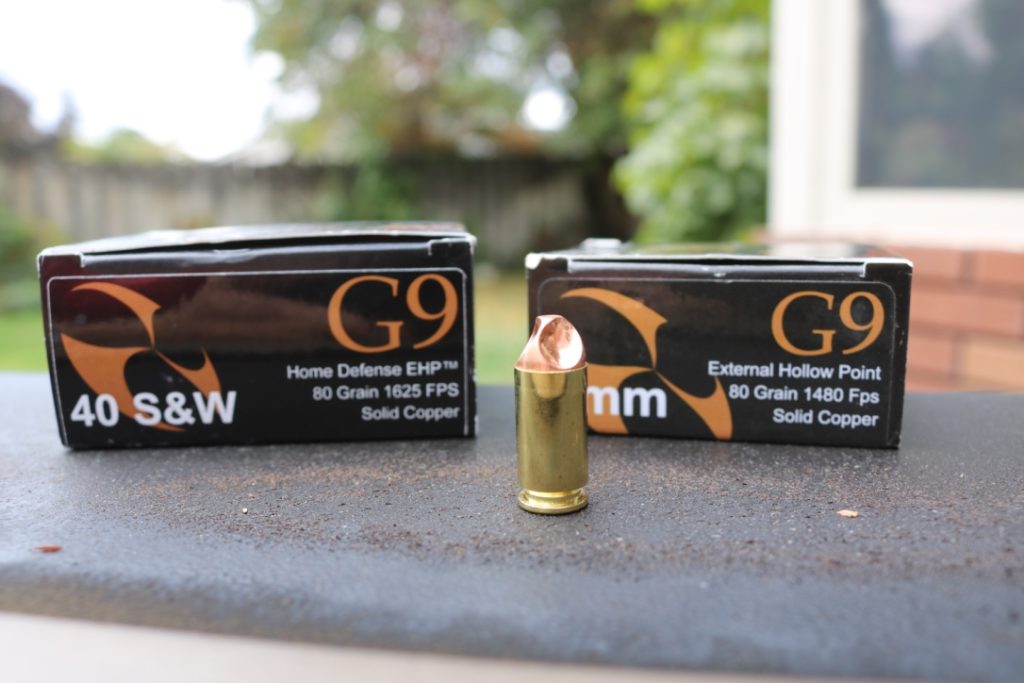 Like a lot of you, I am a skeptic by nature. You don’t survive very long in the gun business if you aren’t. Or maybe you do, but you sell and re-purchase your collection every 5 years depending on the trends. Anyway, I am a skeptic. Both from my time as a writer and my time in the military, I am constantly assailed by the NEXT BIG THING. And about 99% of the time, it is a bad idea in fancy packaging. So the first time I saw the G9 bullet, I was having exactly none of it.

The box reads “non-expanding hollow point”, which sounds like the dumbest thing in the world. It is sometimes also called an external hollow point, which isn’t much of an improvement. Looking at the shape of the bullet, and the words “non expanding,” I instantly thought, “Why would I want that?” and moved on to something else. From just the package and surface presentation of the website, this looks like a bullet designed only to defeat barriers. I already have FMJ for that purpose, which has done just fine, thank you, and at a very nice price. I actually wondered if this was developed solely for the military, with the dual problems of fighting in the concrete jungle and not being allowed to use hollow points. 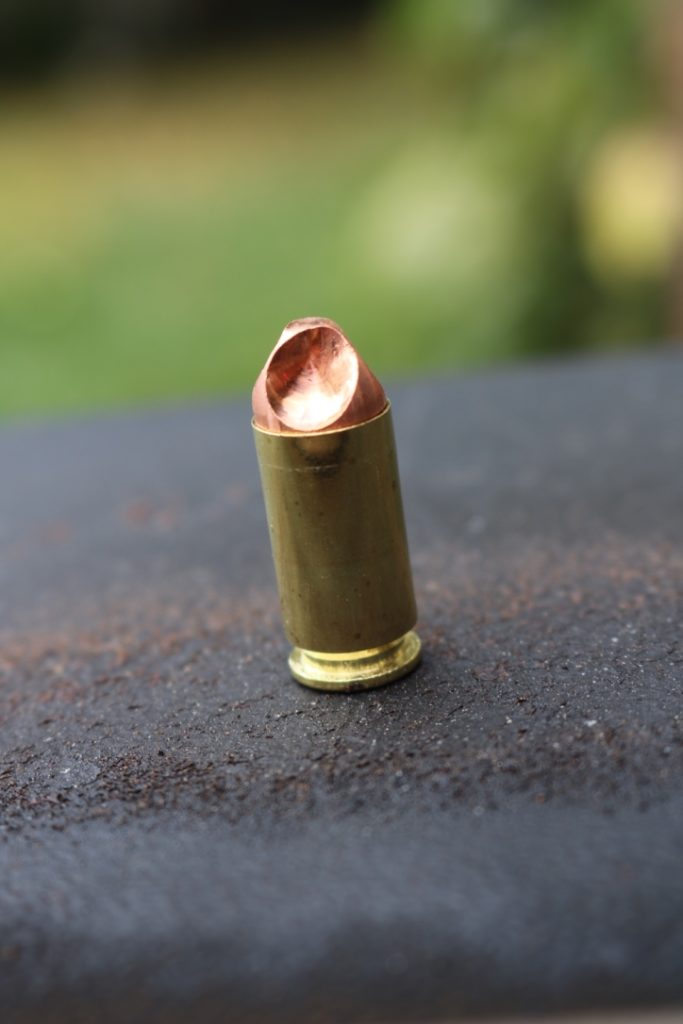 About a month ago, a friend asked if I would take another look at the G9 offerings. I owed him one, so I picked up the phone, and in pretty short order was talking to the designer of the bullet. No harm, no foul, I can shoot a gel block or piece of sheetrock as well as the next guy. I thought that at worst, I would video the G9 not expanding in a gel block, tell you all that, and we could go back to arguing about 9mm vs 45 ACP. I was not prepared for what happened next.

I got the basic spiel, to which I immediately countered, “Why would I want a handgun bullet that doesn’t expand, exactly?” The reply was, “Because it doesn’t have to. And it will make a hole 5 times bigger than any hollow point on the market.”

That sounded like nonsense, but he did have my attention. I listened up but was still half thinking I was being pranked for a radio show.

Expended G9 on the left, regular hollow point on right.

The explanation is something akin to this, and I will take full responsibility for mangling the scienc-y words. (So long as the marketing department at G9 takes responsibility for stamping the box “non expanding” and not explaining what that means.) The G9 is a completely different type of bullet. Instead of expanding and crushing tissue, it has another mechanism of injury. Due to its patented fin shape, it actually grabs tissue like a propeller. Then, to do its damage, it uses rotational force and liquid displacement to project the tissue in its immediate path outward like a water jet cutter.

The G9 has a couple of other things working against it, in terms of getting people to understand its function. First, it doesn’t perform as well in gel as it does in real tissue. Gel is exactly that — it doesn’t have a liquid component. For the G9 to work at optimal performance, it needs real tissue. In theory, at least, it would work even better in tissue with the vascular system still working. That is to say, something with a heartbeat still feeding the muscles. But PETA would petition Youtube to shut us down if we did that, so we worked out a compromise. We used pork slabs, soaked overnight in water, to try and at least rehydrate the cells. It isn’t as good as on the hoof but promised to provide a more accurate picture than ballistics gel.

The second thing about the G9 is that it requires speed to work. The higher the muzzle velocity, the higher the revolutions per minute, and the better it performs. This leads to further details the box doesn’t tell you. The 9mm G9 bullet is only 80 grains, moving at an impressive 1480 feet per second. That may or may not send tingles up your leg, depending on which handgun bullet theory you believe in. I am of the big and fast theory, which is why I like 10mm. But in most normal-sized guns, that relegates me to the big and slow club, like 45 ACP. In whatever caliber, I tend to choose the heaviest bullet, i.e., 180g over 165g in 40 S&W. The light and fast crowd has a following too, but normally not my choice. Understanding how the G9 works, though, you see the necessity of a light, fast bullet. Bear with me, even if that is not your flavor.

Still prepared to not be impressed, off to the range we went. We set up the first 18-inch thick target, I loaded up a 9mm, and then the sky cracked open. Ladies and gentlemen, I have never seen anything like the G9 performance out of a handgun. If you watch the film, you will see me at a rare loss for words. The terminal ballistics can only be described as devastating. 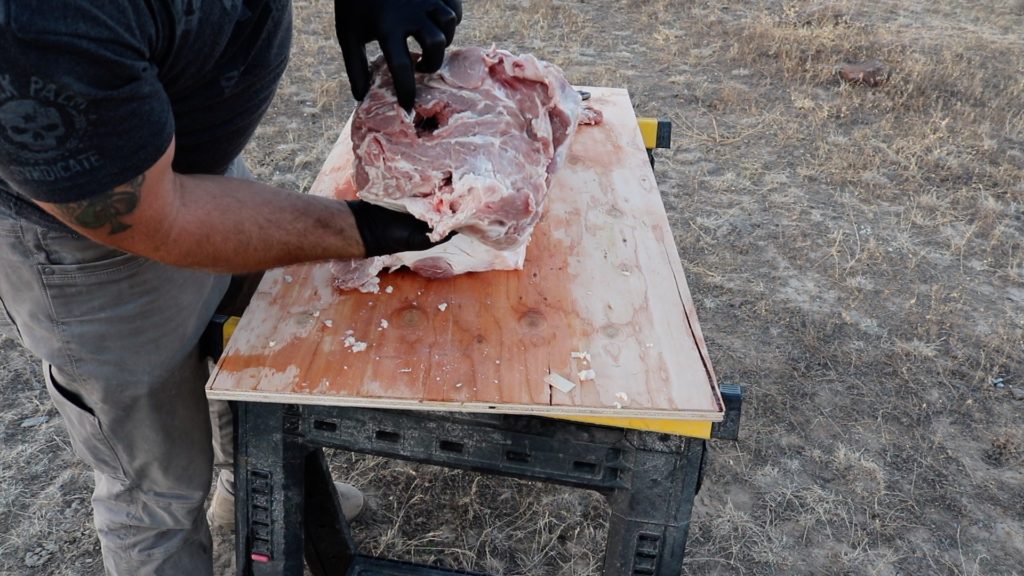 When I stuck my metal probe in the wound track, it felt like I was dropping it down a well. With my finger, the results were even scarier. The G9 bullet caught right after entry and left a six-inch cavity as wide as my thumb, easily. The tissue wasn’t pushed out of the way, it was gone. From a slight press on the first fascia layer of the meat, the hole looked like a 12 gauge slug went through it. From a 9mm round.

As far as actual tissue destruction, I am still at a bit of a loss. I have seen serious rifle rounds that do less damage, arguably most of them. Dead meat doesn’t really account for secondary cavitation, and it is an unreliable wound indicator, anyway. But as far as the job of making a gigantic hole, the G9 borders on the unbelievable.

More rounds of 9mm showed the initial test not to be an anomaly. Every round produced similar insane results. For reference, I also shot a conventional hollow point in the same chunk of meat for side by side testing. The results aren’t even in the same ballpark. By the extremely un-scientific testing method of guessing while using my hands, I would put the G9 performance at 5 times that of a properly mushrooming conventional hollow point. 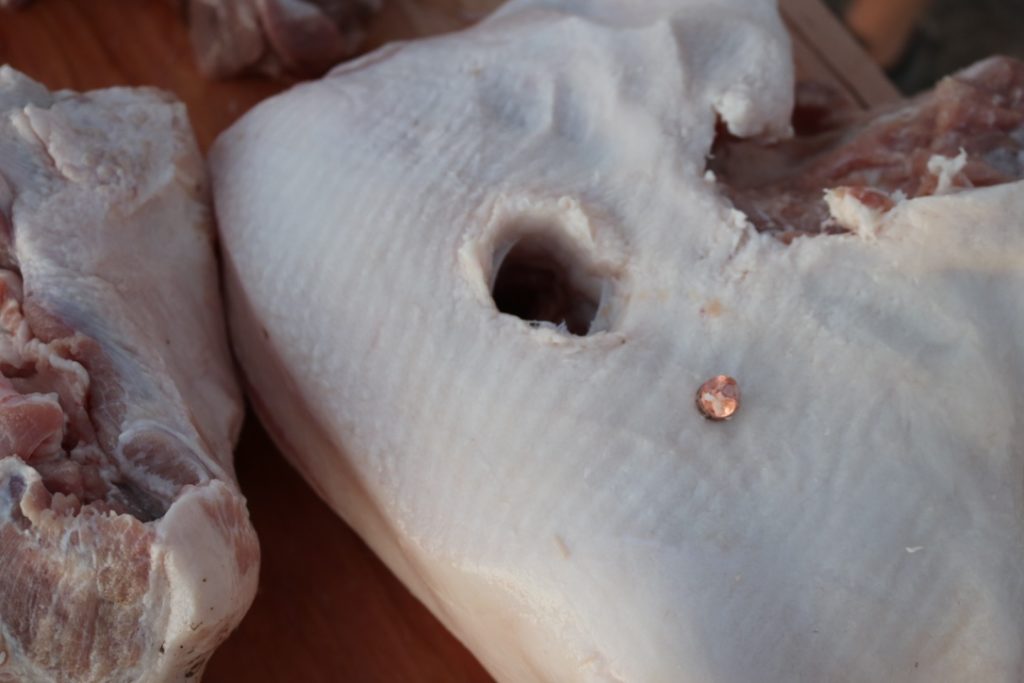 9mm entrance in fatty tissue, with a recovered projectile.

I had a single box of 40 S&W on hand as well, which we also decided to give a go. It was kind of an afterthought since most people have converted to 9mm these days. G9’s inventor told me that the 9mm would outperform anything on the market in caliber, but the 40 did yield additional gains from both surface area and speed. The G9 40 S&W load is an 80-grain bullet, moving at 1640 FPS.

If the 9mm is best described as devastating, the 40 is best described as catastrophic. I have a hand size that prevented a career in proctology, if still smaller than actual gorilla mitts. The 40 cal entry wound was easily two fingers wide, and the cavitation inside was like something out of a horror movie. It is a safe bet it was twice the damage of the 9mm round, which was already impressive. It is a safe bet that if you connect with the 40 cal, nobody is walking that off.

40 S&W was even more impressive.

So while more testing needs to be done, I think we can call this one a winner. The G9 punches well above its weight in testing, at least on inanimate tissue. This needs to be used on a hog hunt for certain, and some street knowledge would be nice too. It advertises as barrier blind, as well as extremely good against auto glass (other things we need to test). But for right now, as it sits, am I impressed? Let me put it this way. I came home that night and swapped it into my nightstand and carry guns, which is the best endorsement I can give. 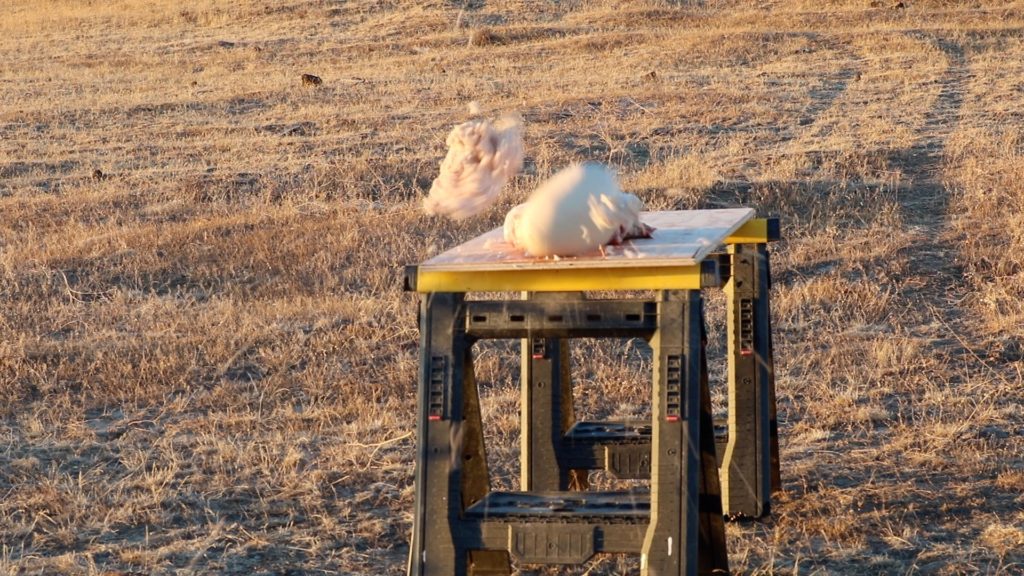 Turkey loaf destroyed in the name of ballistic science.