My name is Dr. Watson. Actually, it’s Levi Sim, but when I’m out hunting with my friend, Nick Holloway, I feel like Watson following Sherlock Holmes around. I mean, I’ve got a science degree and a life-long passion for wildlife, but Nick’s knowledge and understanding of every species we hunt is incredible. And as a brand new hunter, I need all the help I can get.

Take coyotes, for instance. The first time I went coyote hunting with Nick, I learned more than I had in all the books I’d read on coyotes and all the podcasts and videos I’d consumed. Within an hour we’d seen four coyotes and killed one. And we did it in the rain. Incredible. 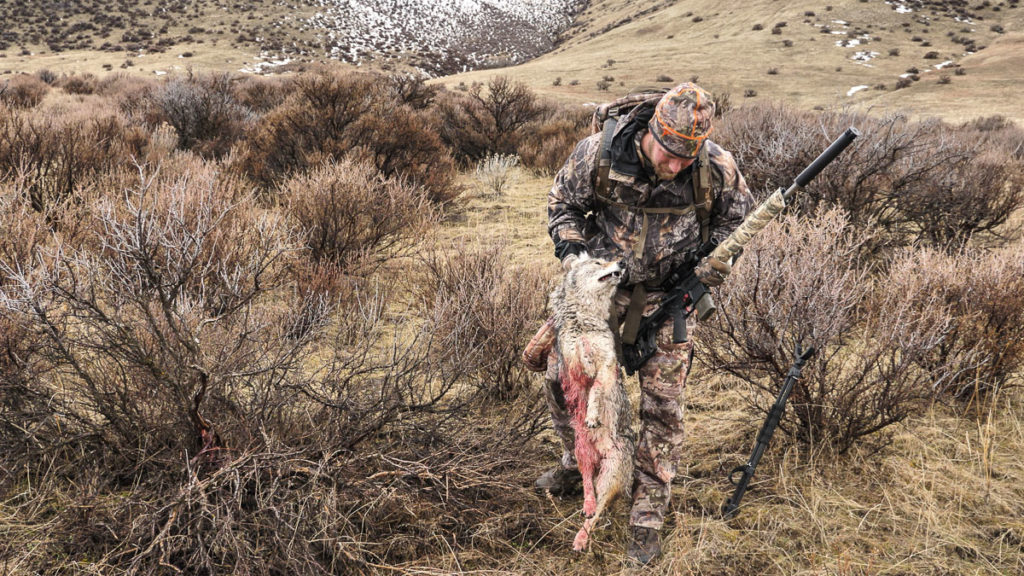 This was my first hunt with Nick, last March. He killed this coyote from 304 yards. He used an AR-15 compiled of mostly Odin Works components with an 18” marksman barrel and HiperFire competition trigger fitted with a Burris XTR 1-8×24 scope and a SilencerCo Harvester 300 suppressor.

This summer, I was surprised and excited to draw a tag to hunt pronghorns this Fall. The best part was that Nick was able to join me for my hunt, and that’s where this story gets exciting.

When you’re in a spot likely to have pronghorns, it’s also likely to have big mule deer, maybe elk, and definitely coyotes. We left the truck and within minutes had spotted several pronghorn bucks. Making our way to the top of a ridge to glass, we crossed a flat valley and suddenly the air was filled with howls and yips and barks. It sounded like a gang of coyotes was getting together and we happened to be in the right place at the right time. The thing is, the more I hunt with Nick, the less this kind of coincidence seems like luck. 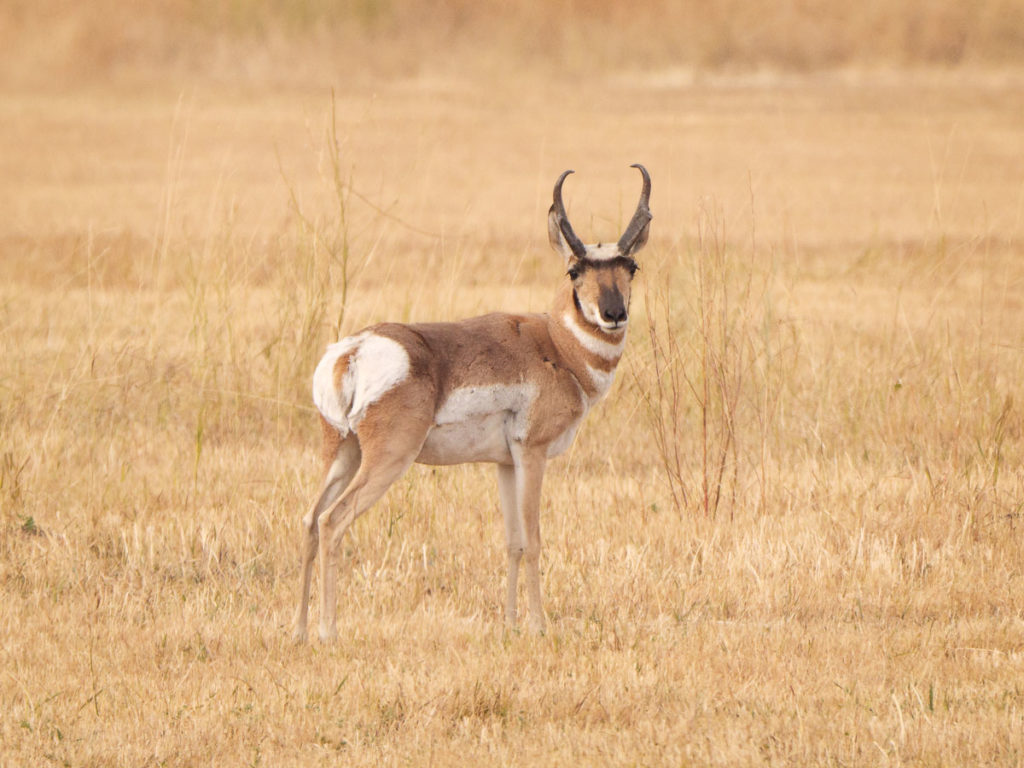 Pronghorns have enormous eyes for their body size, which makes them very difficult to stalk.

There’s just something so enticing about those calls. Maybe it’s because they sound like dogs, or maybe it’s because they are sonorous and playful. You just can’t ignore them, and when they are just a few hundred yards away you can’t do anything but try to hunt them. With a rifle, you can pick them off from a distance. The trouble is that the rifle’s report will probably ruin your area for hunting anything else that day. You won’t scare any other animals off bowhunting, but you won’t likely shoot one incidentally either.

Nick doesn’t shoot coyotes incidentally, though. He calls them and they come.

He quickly took a look at our surroundings—actually, he already had all the details of our surrounds in his mind because he really is like Sherlock Holmes. His hunting mind is constantly playing scenarios and weighing factors and thinking, “How would I kill a ______ right now and right here?” He considered the wind and chose a spot. It looked like a poor spot to me because the shooter in front wouldn’t be able to see much. But Nick knew that the coyote would come from upwind and pass the caller and circle back from slightly downwind. He knew that the play would be made perpendicular to the wind rather than into it. “He’s going to come in right there straight toward me, and you’ll shoot him at twenty yards.”

I was surprised when Nick offered me the shooting position. This is where he differs from Sherlock: he’s quite generous. I settled in by the bush. Nick was behind, concealed between a couple of junipers.

We could hear at least three coyotes off to our right. Nick started calling and the coyotes kept barking. Nick could see the first coyote come running from directly upwind. It’s a memorable experience to see a coyote come running. They kind of hop as they run, popping their heads up over the brush to catch a glimpse of whatever is making the noise. Face up, ears forward, eyes intent. You realize that they are hunters, too, and observing them would probably teach you everything you need to know about hunting.

Nick was calling with a Syco Tweety, an open reed mouth call that sounds like…nothing else. It’s scratchy and pitchy and awful. And the coyotes are crazy about it. He called for less than a minute and a half before that coyote came bounding toward us. Nick told me where to watch and I drew my bow before I could see it. My bow, a Diamond Marquis, is set at 65 pounds, and I was shooting Black Eagle’s Carnivore arrows with Kudu’s outstanding 100-grain broadheads. These broadheads are flat with only two cutting surfaces and a single bevel on each side. It’s a deadly setup, and I had killed a mule deer doe with them just eight days before. Unlike most broadheads, the Kudu points twist as they travel through the target. The single bevel on each side of the head acts like a propeller and the arrow spirals and ensures a more deadly wound. The doe I shot barely ran twenty yards before expiring. 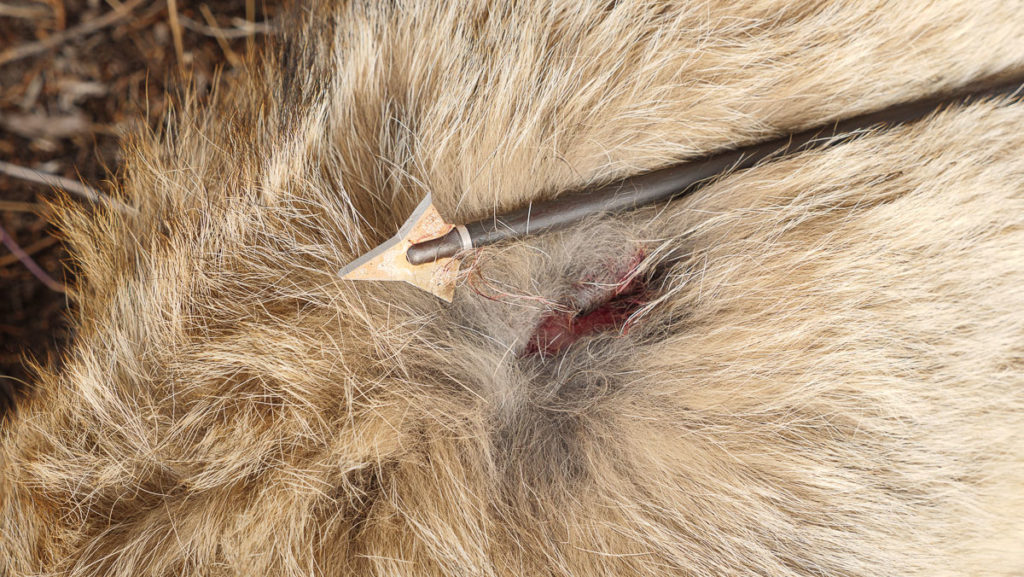 Kudu brand broadheads are remarkably durable and they fly true with little tuning. They sharpen very well and can be used over and over again.

With my bow drawn and the coyote attentively running into view from behind a juniper, Nick caught its attention by making kissing sounds with his lips. It turned ninety degrees and ran straight toward Nick without paying any attention to me. Maybe you can hunt deer and elk wearing a plaid shirt, but I’m pretty sure my camo clothes kept that coyote from noticing me while I twisted my torso with its path of travel. As it came running toward us, I remember thinking, “Man, that’s a fluffy looking coyote!” He looked like a puffball with legs.

As it drew near, I placed my twenty-yard pin right behind his shoulder, kept panning with his trot and tripped the release.

There was a solid “thwump” as the arrow hit muscle and it instantly twisted,  trying to bite back at the thing attacking it. Coyotes always turn to their wound as if there will be another coyote right there biting it. It seemed like it couldn’t decide which side to bite at, the entry wound or the exit wound. It turned a couple of figure eights and then took off into the brush. Nick congratulated me, but I was really still thinking about killing that coyote and I knocked another arrow to go make sure it died. My greatest apprehension is wounding animals and not recovering them. That thought kept me from even considering bowhunting…until I found myself with an archery tag for pronghorn.

Nick advised me to sit tight because there were two more coyotes out there, but the one winded us and ran off and the other sat at 124 yards barking for twenty minutes and wouldn’t budge. That leaves us a reason to go back. 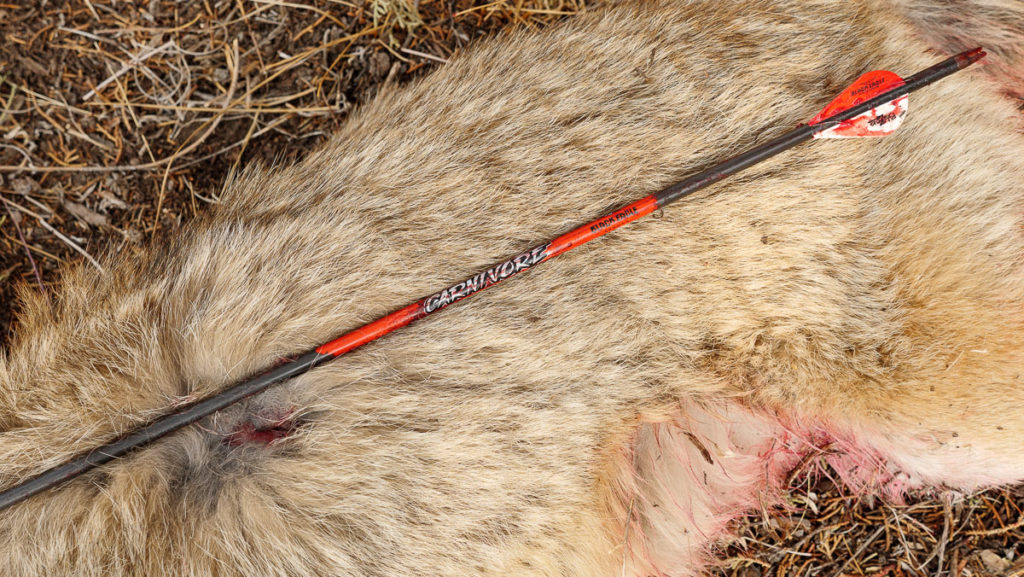 Black Eagle arrows are treating me very well so far.

I walked over to the spot where I shot it and there was blood everywhere. My arrow lay just a few feet away completely covered in gore. I stood where it got hit and ranged back to where I shot from. Exactly twenty yards—just as Sherlock had predicted. Sheesh. 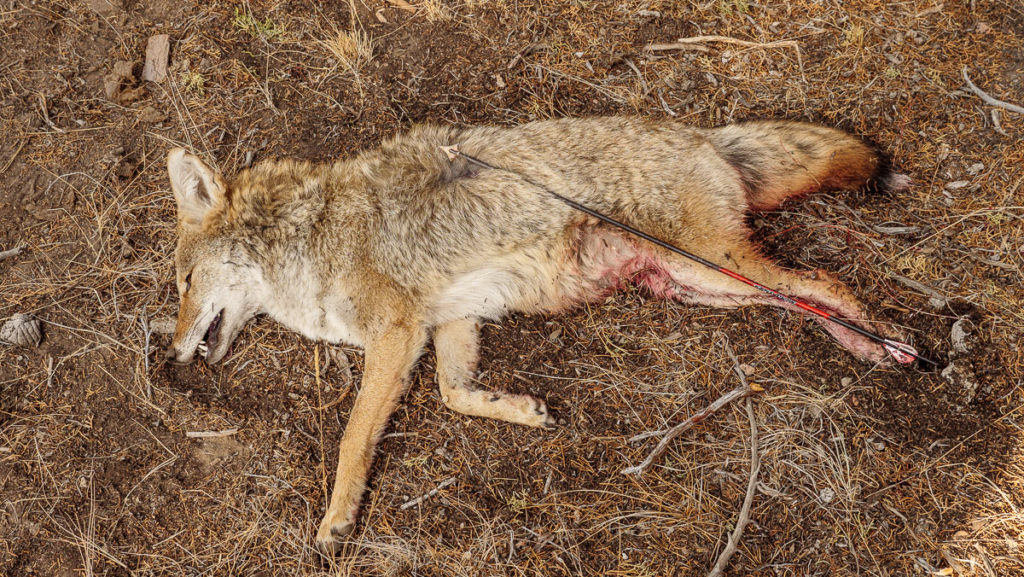 The arrow traveled into the chest and out right under the tail. There was a chunk of flesh that exited with the arrow, too.

We found it under a juniper tree a couple hundred yards away. It turns out that it was a male and my arrow entered right behind the shoulder but redirected and exited under his tail. It traveled the longest distance possible through his body, cutting all the while. 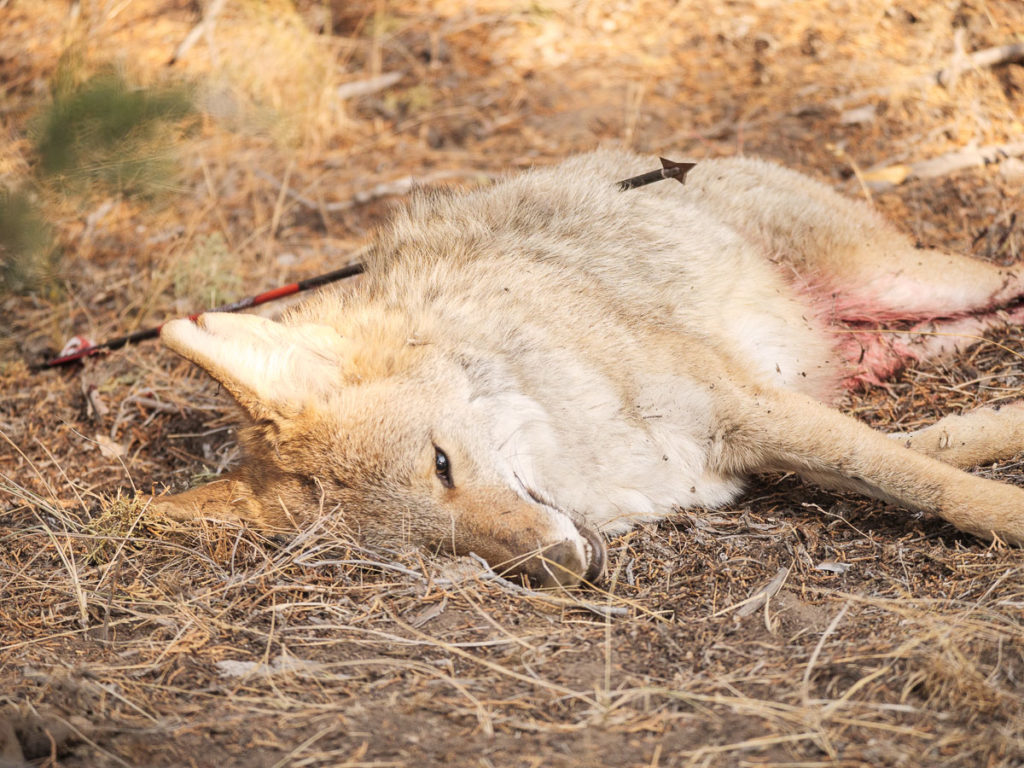 Although it was early in the Fall, this coyote already a lot of down coming on making him appear very fluffy.

I was now faced with a dilemma. I wasn’t on a coyote hunt and I only had Nick for one day of pronghorn hunting. I don’t like to kill animals without utilizing them. I’ve eaten all the rabbits, ground squirrels and rock chucks I’ve shot this year. I’m still working on coyote meat, and the pelt seemed like it was full enough to be worth tanning. Plus, he had a white-tipped tail, which is unusual. Would carrying the pelt around and smelling like a coyote ruin my chances of getting close to pronghorns? In the end, I decided to risk it and kept the pelt. How often do you get the opportunity to tan the first coyote you shot with a bow?

Nick helped me skin him and we packed him up. His huge ears sticking up beside my tripod on my back looked awesome. I didn’t love smelling him each time the wind blew, but it wasn’t that bad. I’m excited to get his pelt back from the tanner. And in the end, we killed a pronghorn that day, too, but that’s a different story about hunting with Sherlock Holmes. 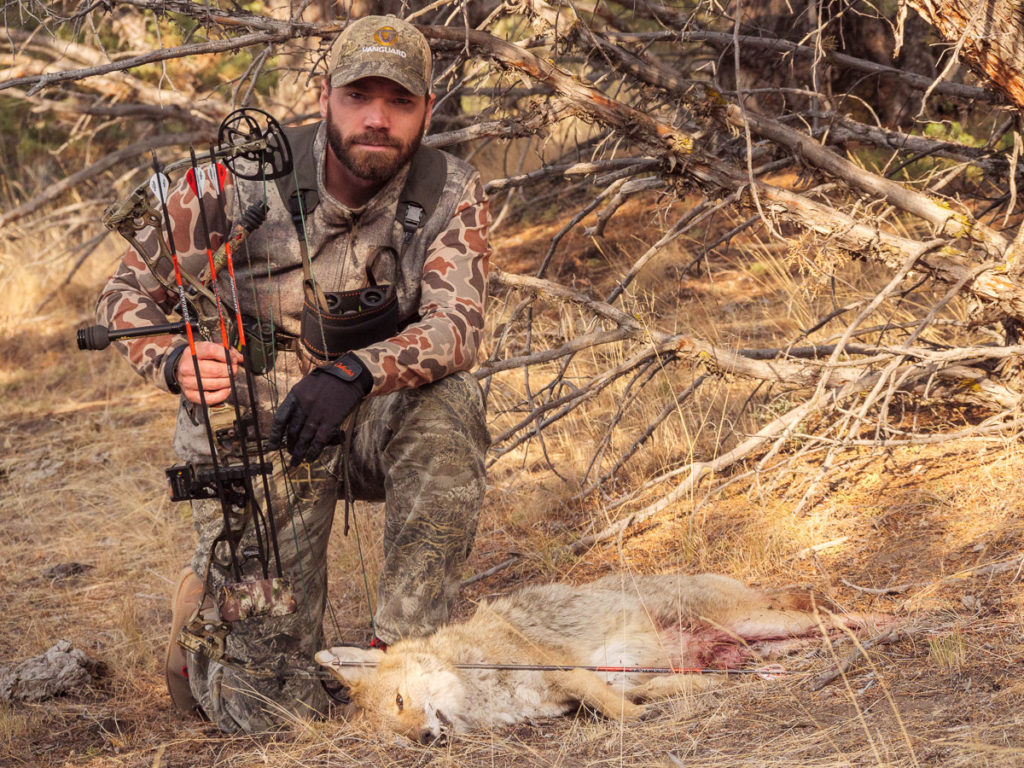 This was a fun way to start the pronghorn hunt. We skinned him and carried him around all day while hunting. I was so excited, I posed with my bow upside down. #rookiehunter

Previous post: Be a Prepper: Your Waterfowl Hunting Buddies Will Appreciate Your Efforts