Bull Elks are Bugling…Wherever They Are

The aspens and western tamaracks are starting to turn, hillsides and valleys glowing golden. Coming autumn puts a chill in the night air, with crisp mornings and maybe a bit of frost, but most days are still pleasant. It’s a wonderful time to be in the high country—even without the elk—a time cherished by hikers, campers, and photographers. And hunters, because the elk are there (American wapiti if you will). This is the time when boy elk meets girl elk, and the slopes echo with the bull elk’s mating challenge.

The bugle of a bull elk is like no other sound in nature. A three-note serenade that starts low, builds into a screeching whistle and drops into a series of grunts as, I assume, the love-struck troubadour runs out of air. It’s an eerie sound, meant to intimidate lesser bulls. The first time you hear it you’ll feel your hackles rise, and you won’t believe that such a sound emanates from a member of the harmless deer family. Once you hear it you will never forget it!

Raised in Kansas, which is not elk country, I was a late teenager before I first heard it. So, as a kid from Kansas, I’ve never taken elk hunting for granted, as perhaps folks who live in the Rocky Mountain West might be able to. My first bull came in the fall of ’72, a long time ago now. There have been quite a few since, but I still regard the wapiti as a special animal, a major step up in magnitude from the deer that most of us pursue (whatever our local brand of deer might be). To me, after all these years, an elk hunt is a big hunt, to be taken seriously. 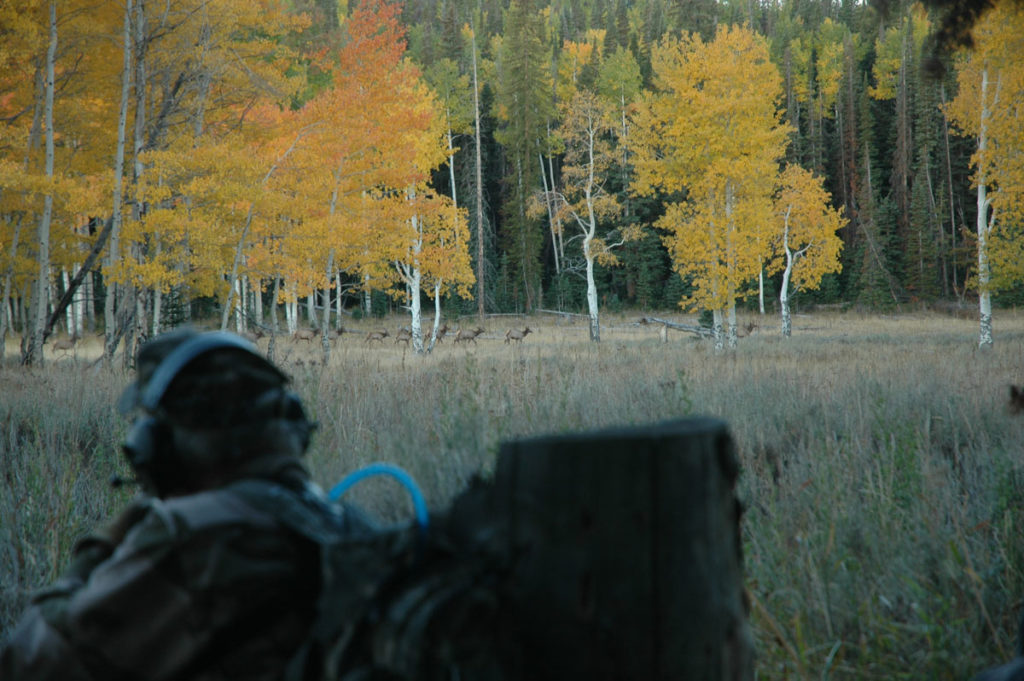 That said, I am not an elk specialist, certainly not to the degree that writing colleagues like Jim Zumbo and Wayne van Zwoll are! If you want serious elk knowledge, those are guys to follow! I recall that, years after he moved from Arizona to Idaho, Jack O’Connor wrote that, living in good elk country, he could go elk hunting every fall, but in some years did not. Only briefly have I lived in good elk country, but although I love every part of it (except, perhaps, packing out quarters!) elk hunting is not something I do every year. So, I guess I’m more of an “O’Connor-casual” elk hunter. Even so, I’ve done a lot of it over the years in most of the Western states. Enough that I believe that an early fall elk hunt, when the bulls are bugling and the leaves are turning, ranks as perhaps the most classic North American hunt, one of the greatest outdoor experiences a hunter can have.

SEE ALSO: Setting Up A Rifle For An Elk Hunt

I’m not convinced that the early bugling season is the very best time to put elk venison in your freezer. I like late hunts, too, after the snow flies. I’m pretty sure more of my bulls have come late in the season, long after the bugles are silent. There are two reasons for this. First, like all things in Nature, the exact timing when the rut—and serious bugling—kicks off is uncertain. Hit it right, and magic. Hit it wrong and early elk hunting, when it’s warm and there’s lots of cover, can be very difficult. Second, I admit, with no apologies, that I am primarily a rifle hunter. Without question, bull elk are most vulnerable during the rut. So, as our seasons evolved and bowhunting grew in popularity, it became traditional across much of the West for archery elk seasons to be held early, spanning the primary bugling time, theoretically increasing opportunity but reducing harvest. More rifle and “general” elk seasons open later after bugling is finished. 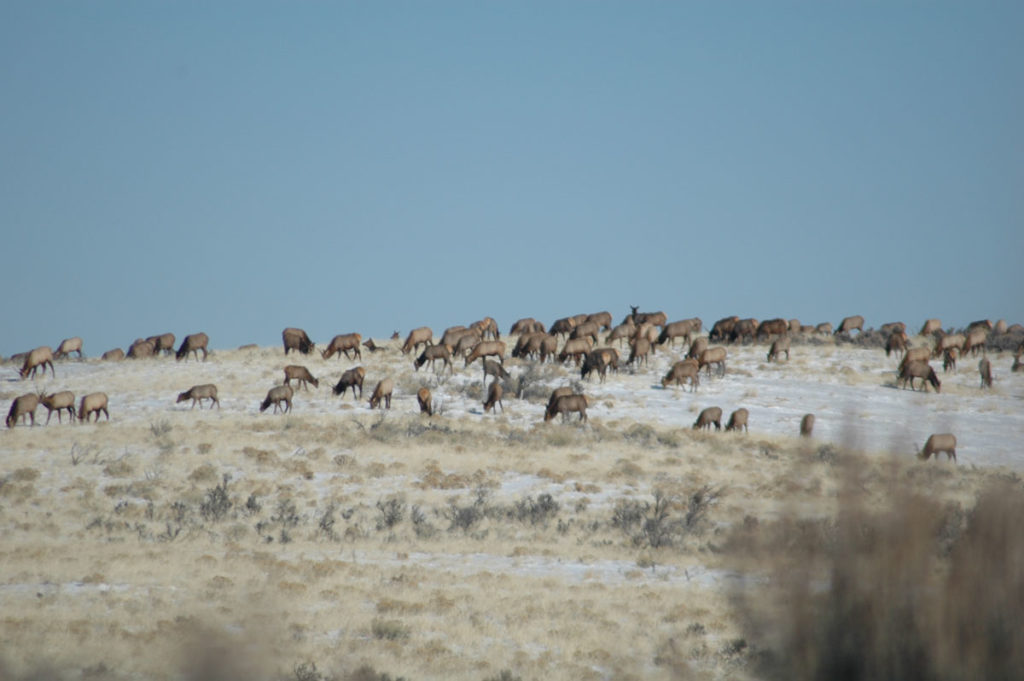 Although the most exciting by far, Boddington is not convinced early bugling seasons are the best times to hunt elk…much later, after the snow flies, elk concentrate in big herds and are generally much easier to locate.

I won’t question the science, but it’s fact that archery equipment is far more efficient today than when this system developed.  Across the millions and millions of acres of public lands throughout the West, and with many of our elk herds at all-time highs, archery elk hunting is one of North America’s great opportunities, and one of our very best “do-it-yourself” adventures. For some years I was a bumbling bowhunter. I never took an elk with a bow, but it was a goal, scotched by a shoulder injury. I don’t begrudge bowhunters, but they have carved out some of the best opportunity to hunt bugling elk…and, in any given year, harvest some of the biggest bulls. Of course, bowhunting is bowhunting, lots of effort with reduced impact, which is what makes the system work. 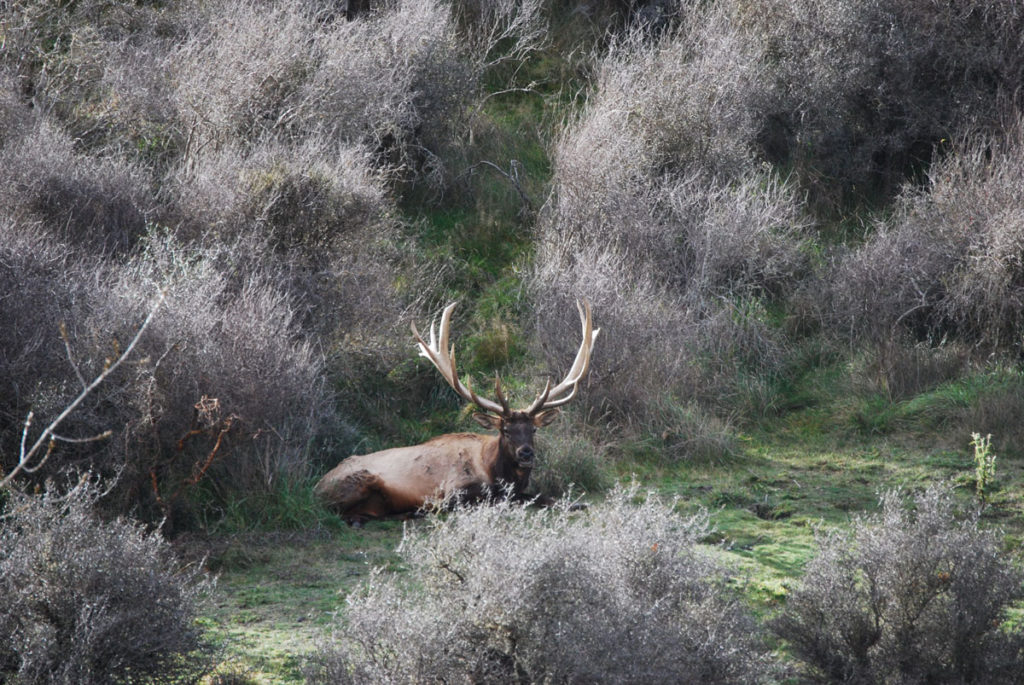 This awesome old bull had bedded near his wallow, bugling from his bed as elk often do. What a great setup for a bowhunter to slip in on him!

If I were truly serious about becoming an expert elk hunter—with a desire to harvest giant bulls—I’d study the archery seasons. Success is not as high as with a rifle, but, trust me, when love-maddened bulls are screaming all around you it is not necessary to fill a tag to enjoy the experience of a lifetime! We rifle hunters can have the same experience, just not as readily available “over the counter.” There are plenty of drawings for early rifle bugling tags. The best areas are not easy, but preference point and bonus point systems help. However, I’ll be honest, whether archery, muzzleloader, rifle, or whatever, it can take years (and years) to draw some of the great tags. 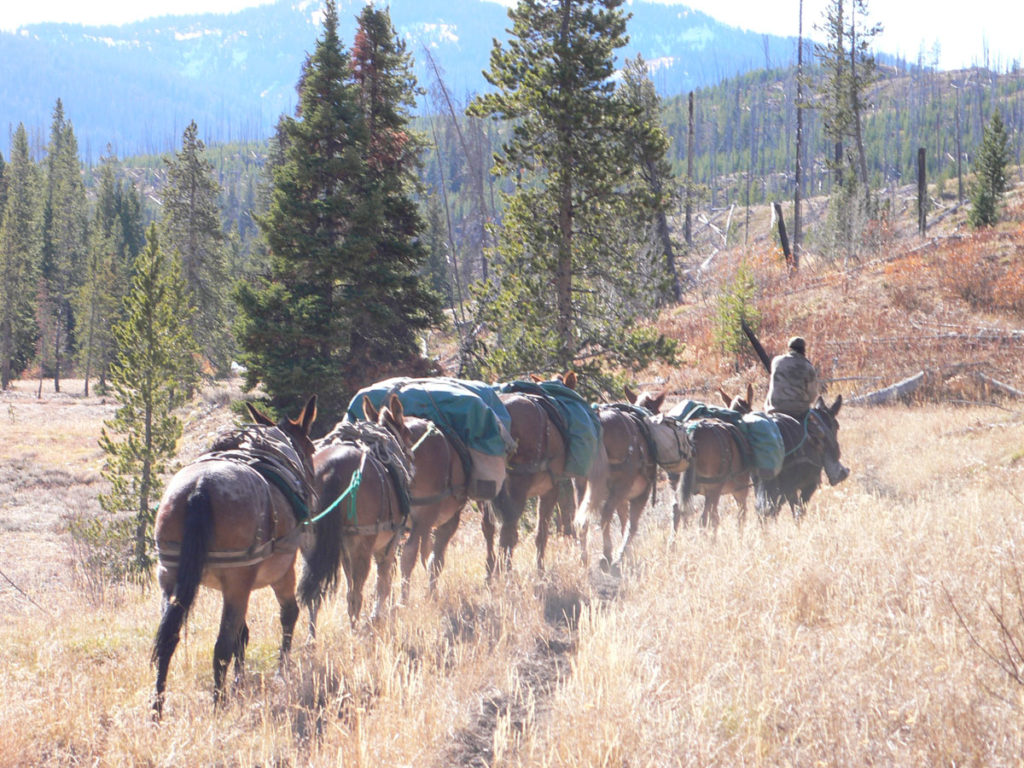 All “pretty packed” and going good, in northern Wyoming, headed toward the Yellowstone boundary. A wilderness elk hunt by pack string is one of North America’s greatest hunting experiences!

The only sure thing is this: If you don’t apply you will not draw! Do your homework, accept the odds, and get in the draws. Other opportunities include private land tags, Indian reservations, and outfitted hunts, not only in the American West but also in western Canada’s awesome elk country, where seasons open earlier than ours. 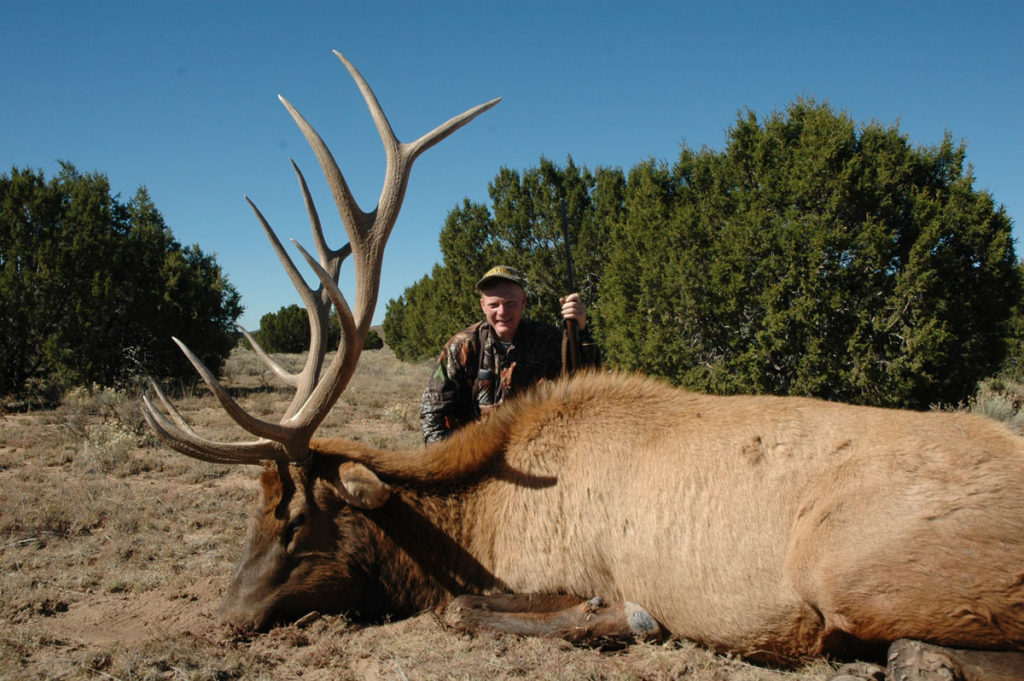 A good New Mexico bull taken during an early bugling hunt on private land. Draw tags, private land tags, and reservations offer some of the best opportunity to hunt bugling elk with a rifle.

I guess I’m saying that great elk hunting comes at a price, either in patience or coin of the realm. But that’s enough gloom and doom; there’s another odd dynamic that makes hunting bugling elk more accessible today than when I was young. Whether you believe in global warming or not, we’ve experienced a succession of milder, later autumns. Without question, this has pushed back peak bugling by at least a week. Forty years ago, Colorado’s first “general” rifle season, early October, caught some residual bugling, but it was very post-rut. Today this has changed, usually with good bugling at least through the first week in October.

Boddington, Tom Arthur, and Mark Jones with a fine 6×6 Colorado bull bugled into about 20 yards in northwestern Colorado, during the early October rifle season. These days that period can catch a tremendous amount of rutting activity.

The last couple of times I hunted this season elk were still going absolutely crazy! Colorado probably isn’t the best place to look for a monster bull, but with a large and seemingly ever-expanding herd she is one of my favorite places to hunt elk—and her early general season offers some of the best, most accessible, and most affordable opportunity to rifle-hunt for bugling elk. 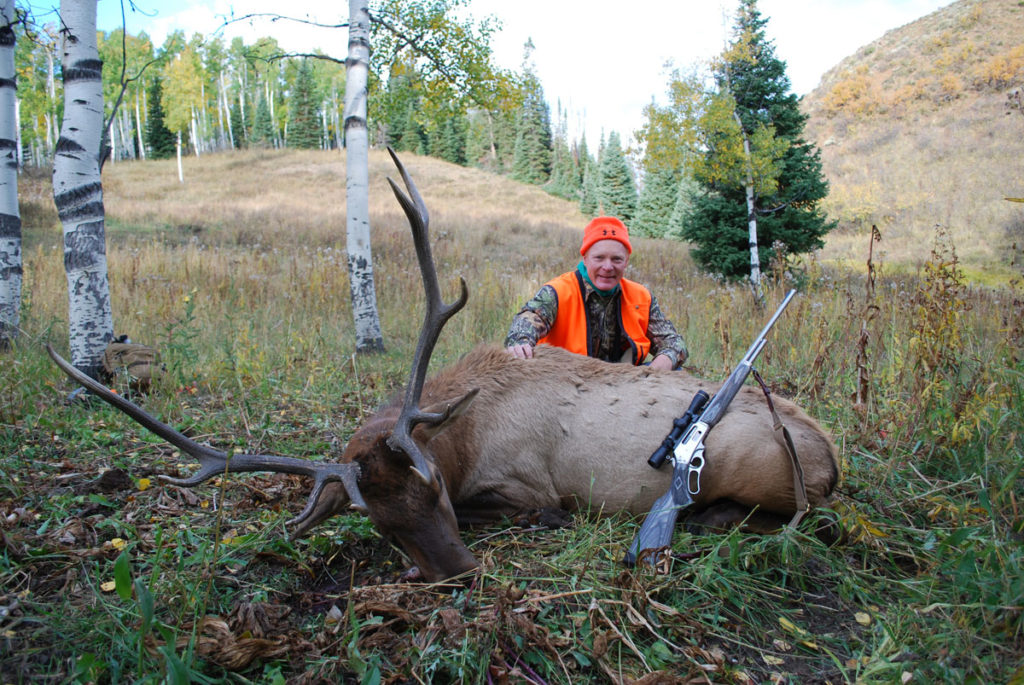 Another Colorado bull bugled in during the early October rifle season. This is sort of a “raghorn” 4×5…a bull like this is a much more reasonable expectation than a really big bull, but when elk are bugling its truly about the experience.

Regardless of what equipment you prefer, hunting bugling elk is a bucket list North American hunt. Perhaps surprisingly, it doesn’t have to be in North America! Most of us know European red deer are so similar to our elk that we long considered elk a subspecies of red deer. The red deer is smaller, more reddish in color, typically forming a cluster of points or “crown” at the tip of the main beam. Habits are similar, but red deer don’t bugle; they “roar,” a long, guttural, one-note bellow. It’s said this sound carries better in heavy forest, while our “bugle” carries better in mountains and plains. Recent DNA research suggests red deer and elk are different enough to be separate species: The red deer remains Cervus elaphus, while science now labels wapiti Cervus canadensis. 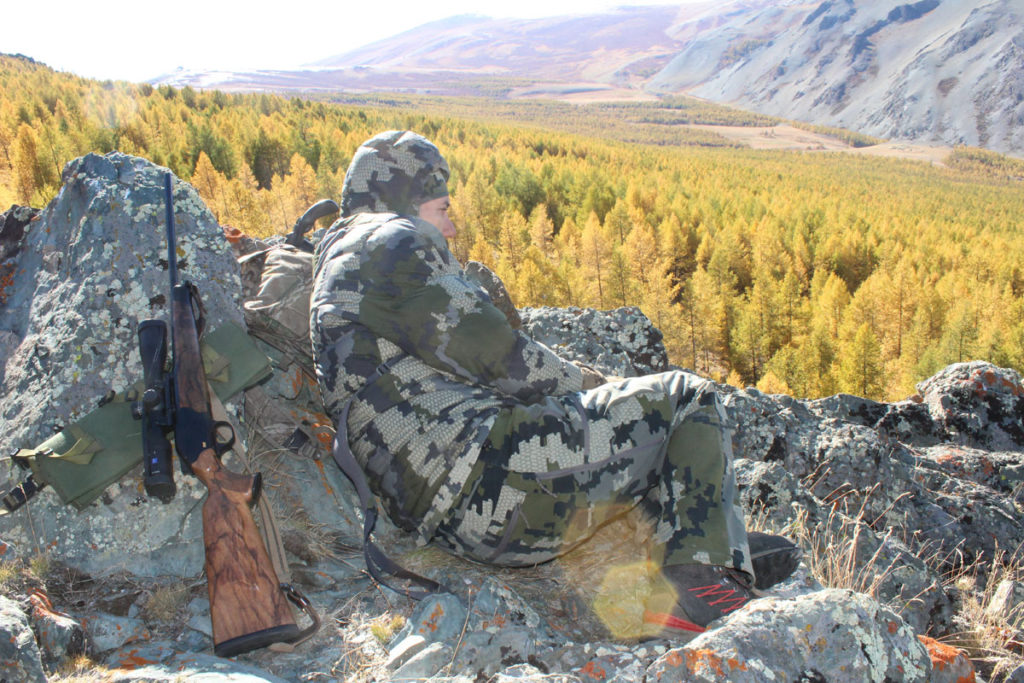 Looks just like so much of western Montana…but this is Asian wapiti country in northwestern Mongolia. The trees are an Asian species of tamarack, turning golden in late September…and there are bugling bulls among them.

Four subspecies survive in North America, plus the extinct Eastern and Merriam’s elk. From the Pacific westward to Central Asia there are also several subspecies of Asian elk, where they eventually transition to red deer. As I write these lines I’m in Mongolia, late September, and about a week ago I shot an Asian wapiti, what we used to call “maral.” At a distance, they seem visually identical to our elk, but when you get close the bodies are grayer and less yellow, similar but definitely not exactly the same. Hunting them was much the same, definitely the same tremendous thrill, the same great venison. And, yes, their lilting three-note bugle is exactly the same, echoing through the Altai Mountains. So, it turns out our Western elk hunters don’t have a copyright on that awesome September song! 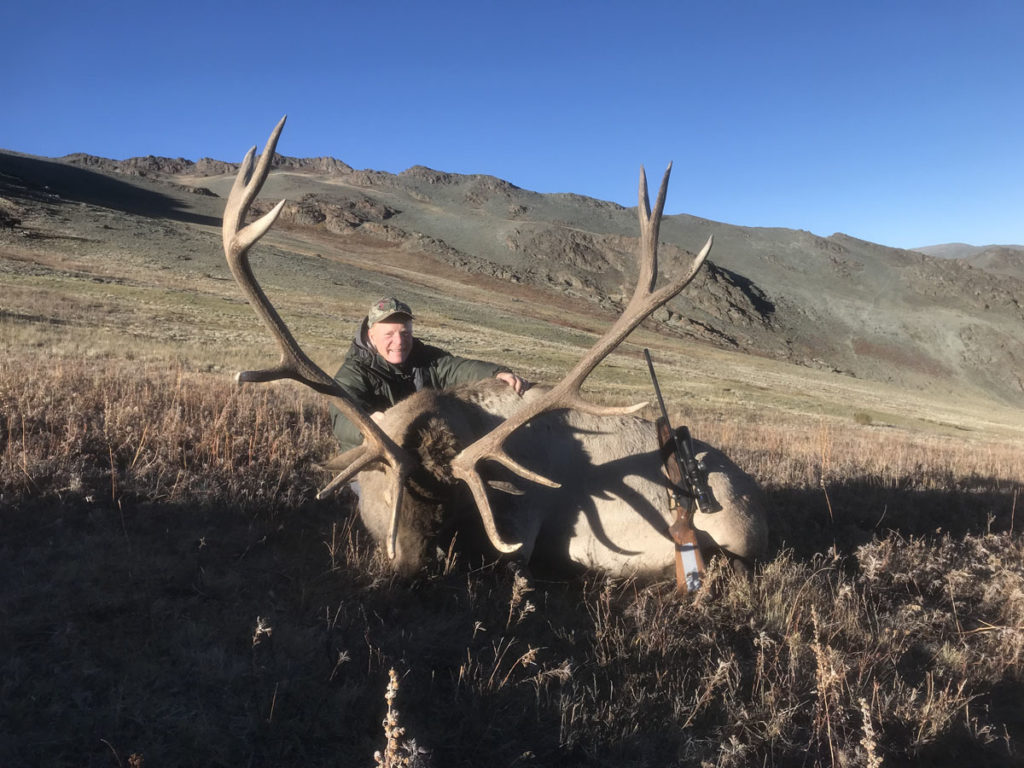 The Asian wapiti is visually almost indistinguishable from ours, same size and antlers. Look close and this Mongolian wapiti or maral stag is a bit too gray in color, rather than the almost yellow body of our elk.