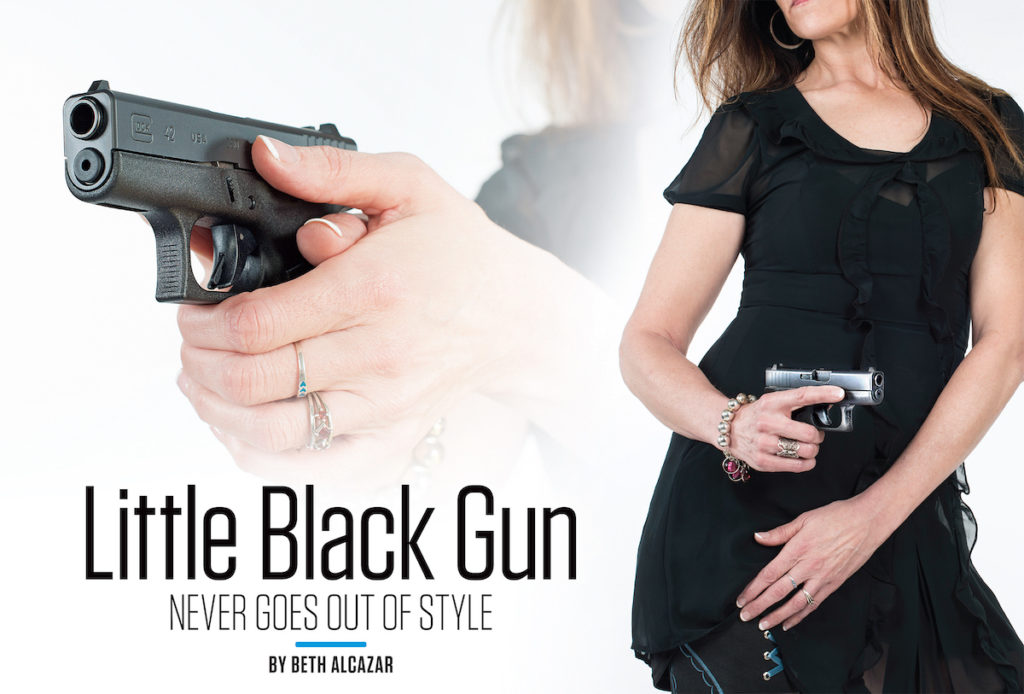 It’s a staple of the female wardrobe, a go-to outfit for many occasions, a tried-and-true fashion statement that flatters every style, every decade and every frame. The little black dress hangs in the closet, ready at a moment’s notice to dress up or to dress down … or to dress to impress. Similarly, every woman needs a little black gun. A small-caliber pistol or revolver is such a basic gun; it’s a go-to carry for any situation, a tried-and-true handgun that fits every lifestyle, every age and every ability level.

Forget the myth that women are weak and unable to handle larger-caliber weapons and disregard the idea that a smaller gun doesn’t do enough damage. Any caliber is capable of turning the tide of a deadly encounter. From first-time gun owners and younger shooters to arthritic grannies and moms on the go, small-caliber guns can be more comfortable to carry, smarter to train with and easier to afford.

For a lot of women, the size and weight of a gun make all the difference in whether she will actually carry it or just leave it behind in the car. With three children in tow, I have enough random items taking up space without adding pounds to my totes and handbags. I really don’t want to add a 5-pound behemoth, and it just wouldn’t be very practical to pack my .44 Magnum with a 7½-inch barrel! By the same token, it wouldn’t be very easy (or very attractive) to take a weapon that has too much bulk or heft and attempt to conceal it under my clothing. With women’s more closely fitted fashions, cuts and fabrics, it’s already difficult enough to conceal a handgun. A woman doesn’t want to have to sacrifice fashion and beauty in order to carry, and she doesn’t want the outline of a revolver showing through her clothes or creating noticeable, unflattering lumps.

For concealed carry, smaller-caliber guns such as those chambered in .22, .25, or .32 often offer less bulk and less weight and may even be a better fit in a woman’s hand. I’m 6 feet tall and my limbs, hands and fingers are appropriately proportioned, so I don’t necessarily have to opt for smaller-size guns, but I have many “vertically challenged” friends who don’t measure up to my stature, even in 4-inch pumps! For them, a bigger gun is more than just a big inconvenience; it’s a big problem. And it’s important to understand that a woman is not going to want to own, carry, or use a firearm that doesn’t comfortably “fit” her.

On the other hand, it’s important not to select a gun that’s too light, either. A woman might be drawn to more visually appealing guns, be they Tiffany blue, lavender, leopard printed or bedazzled! But a “cute” little firearm that fits in the palm of your hand or in the pocket of your clutch may not be the most sensible selection. I always prefer to choose a gun that’s “light enough to carry around… but heavy enough to know it’s there.” A solid gun with a little weight to it will help you shoot more accurately, and it will typically be better constructed as well.

Besides considering overall size and heft, it’s also important to consider the slide movement and weight. I can’t tell you how many times I’ve pinched my finger because the slide felt a bit too heavy for me to rack properly. It’s embarrassing and annoying…and potentially deadly in a dangerous encounter. Of course, while manipulating the slide effectively is mostly about technique, the weight can cause someone to feel unsure or awkward. And what good is it for anyone to have a gun she can’t properly load, unload, rack or shoot? If the slide is an issue, then a small-caliber revolver or even a pistol with a tip-up barrel would be a good alternative for her.

No matter what handgun a woman prefers, she should focus on her ability to carry it comfortably, retrieve it easily, and aim and shoot it accurately. And for training, a smaller-caliber gun can offer a very enjoyable and satisfying experience. I picked the brain of “Boo” Stiff, an official Problem Solver at Mark’s Outdoors in Vestavia, Alabama, where’s he’s worked for more than 13 years. Boo has seen all sides of the industry, from start to finish, and for men and women, young or old, he believes there’s nothing like a .22 revolver or semi-automatic pistol.

“More people have learned to shoot with a .22 than with any other single caliber,” Boo shared. “People are generally more comfortable with it. With less recoil, there’s less anticipated flinch, and that equals more accuracy. So, people shoot with more confidence when they use a smaller-caliber gun.”

I have practiced with a Sentinel .22 revolver. It was quiet, accurate and fun. But it wasn’t my first shooting experience, nor was it my gun. I actually first started shooting with a 9mm and have the most practice with this caliber, so shooting a .22 for the first time was kind of weird. I remember scrunching up my face after the first shot and wondering if something had gone wrong. Where was the recoil? Where was the noise? Did this thing really shoot? I checked the paper target and found one, small hole. Satisfied, but a bit confused (and perhaps slightly amused), I sent it back out and punched several more holes into my favorite zombie.

The Sentinel was my first introduction to smaller calibers … and my first experience with less recoil. So, it’s easy to imagine that a .22 may be less intimidating and less deafening to many shooters. With significantly less flinching, wincing and recoil anticipation, even a beginner could shoot with surprising accuracy. I can see my gun-fearing mother (who hates the thought of loud noises and a gun’s forceful kick) and my soon-to-be-old-enough daughter (who has not yet practiced with a “real” gun) comfortably shooting for the first time with a .22 pistol. And while this particular model may not be their handgun of choice (should they decide to purchase their own one day), smaller-caliber handguns are definitely a terrific way to introduce people to shooting.

Most women love a good bargain. But we also have a keen understanding that in the long run, the best purchase is the well-made item at a good price rather than the least-expensive option. It’s not wise to march into a gun store, seeking out the cheapest revolver you can find. But it is wise to consider the options. And all in all, a smaller-caliber gun can be more cost effective — both for the gun and for the ammunition.

Just like with making any other purchase, it’s essential to shop around and to check out options and prices from various gun shops before finalizing your decision (Editor’s Note: All local sales on GunsAmerica are FREE!). You probably aren’t going to find a buy-one-get-one coupon or a rewards card offering discounts on new gun purchases, but you can find price comparisons, wide selections and helpful, knowledgeable salespeople. Use those to your advantage and be a smart shopper.

Of course, with ammunition costs rising, practicing with any gun can be expensive. I know that my husband and I haven’t been to the shooting range as much as we’d like because purchasing ammo keeps emptying out our bank account. Luckily, smaller calibers will help keep more money in your wallet. “For a fun, accurate gun that’s inexpensive to shoot and train, a .22 is a popular choice,” Boo explains. And even though I love shooting my 9mm and my .44 Magnum, we almost always bring the .22 along because we can shoot so many more rounds for a lower cost.

With less bulk, limited recoil and lower costs, small-caliber handguns are a great option for just about any shooter. But whether a woman chooses to carry a handgun with pink grips or a lip-gloss-sized pistol, like that little black dress, one size does NOT fit all. The correct gun is the one that works for you. So, choose your own; don’t let someone tell you what you need. We are all different, and you’ll just have to try a few on and see what fits best: the one that fits your hand, in a caliber that you can comfortably control that you can properly manipulate without error, and that you will practice with until you become proficient. Whether it’s a backup gun or your carry of choice, you just might be able to accessorize a small-caliber handgun with that little black dress.