The M1 Carbine and The Story of War Hero Jack Lucas 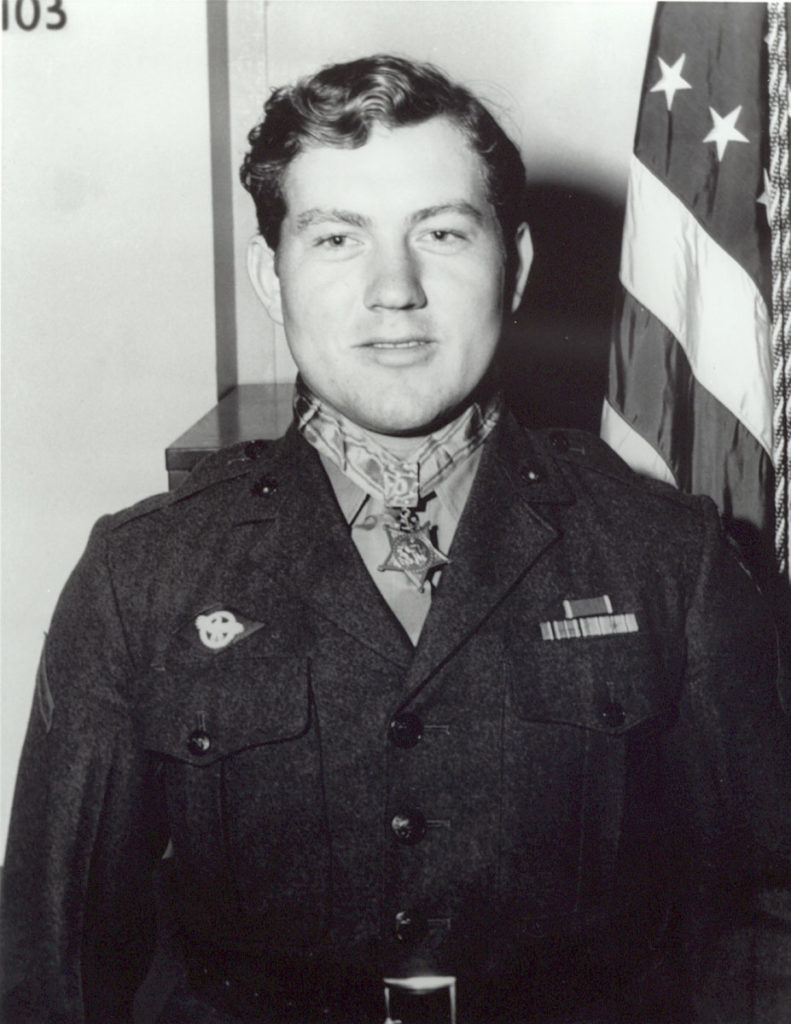 At age 17, Jack Lucas was the youngest recipient of the Congressional Medal of Honor in the history of the US Marine Corps.

In August of 1942, Jack Lucas forged his mother’s name on an enlistment document and fraudulently enlisted in the United States Marine Corps. He was fourteen years old at the time. His was a muscular build, so he could pass for an adult in dim light.

After successfully completing training as a machine gunner he was assigned to the V Amphibious Corps at Pearl Harbor, Hawaii. By all accounts, he was an exemplary Marine. When his commander discovered his true age it was resolved to sideline Jack so he could avoid combat and grow old in peace. In response, Jack went AWOL carrying nothing more than his dungarees and field shoes and stowed away aboard an assault transport ship headed for Iwo Jima. One day before he was to have been declared a deserter Lucas turned himself into Captain Robert Dunlap and was assigned to Dunlap’s rifle company. Lucas celebrated his 17th birthday five days before the Iwo Jima invasion.

On February 19, 1945, Jack Lucas was part of a four-man fire team that was working its way toward a Japanese airstrip via an enemy trench system. While taking cover from an enemy pillbox they spotted eleven Japanese soldiers in a parallel trench and a fierce firefight ensued. A Japanese grenade arced into the trench with the Marines, landing just beyond the point man.

Jack vaulted over the top of his comrade and yelled, “Grenades!” before throwing himself on top of the sizzling bomb. A second Japanese grenade followed the first and landed nearby. Lucas grabbed that one as well and pulled them both underneath his body. The first grenade exploded, throwing Lucas over and onto his back. He still gripped the second grenade, a dud, in his left hand.

Jack Lucas was ripped in his right arm, wrist, leg, and thigh, as well as his chest. His comrades justifiably thought he was dead and abandoned him to continue the mission. A follow-on unit found him barely alive and assigned a corpsman to his care.

As the Navy corpsman struggled to keep Jack from bleeding out, a Japanese soldier charged them both, bayonet fixed. The corpsman dropped his medical gear and snatched up his M1 carbine, killing the Japanese soldier with a couple of quick rounds before he got close enough to do any harm. This lightweight rifle was intended to serve as an effective combat weapon that was easy to carry by second-line troops for whom direct combat with the enemy was not their primary mission. 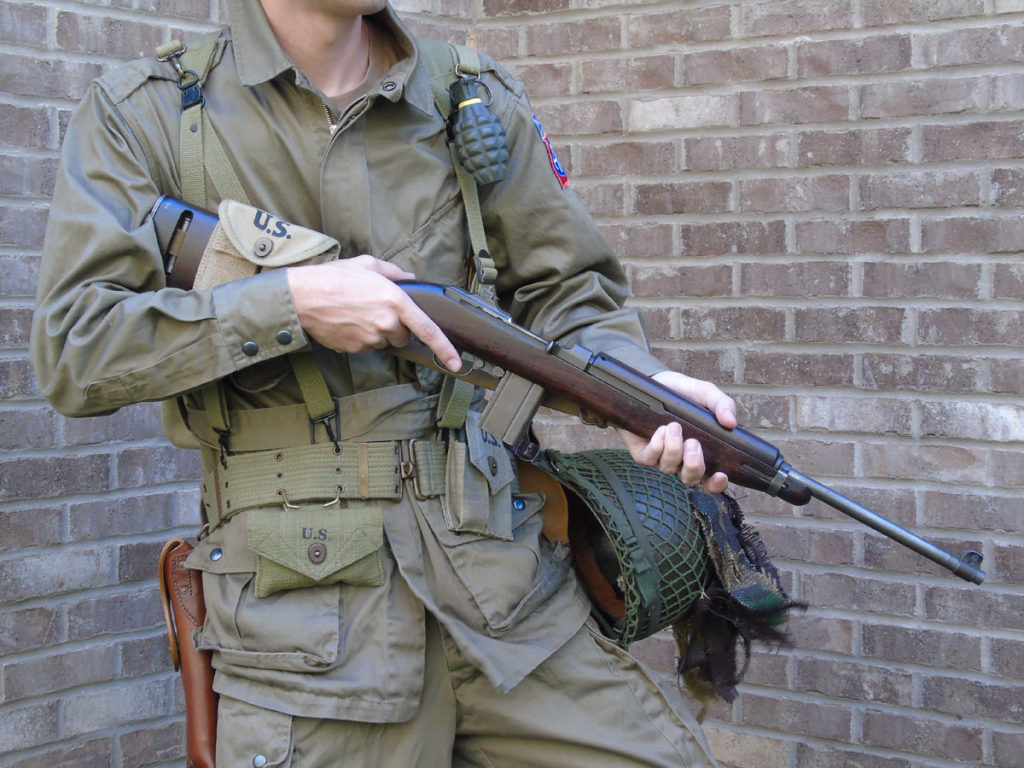 The M1 carbine saw service with Allied forces in all theaters of operation during World War II.

The M1 carbine that this corpsman carried was designed as a Personal Defense Weapon of sorts. This lightweight combat implement represented an effort to combine the portability of a handgun with the innate accuracy and magazine capacity of an autoloading rifle. This compact weapon ultimately saw widespread issue throughout all combat theaters.

The rifle we call the M1 Garand was a superb battle tool, but it was too long, heavy, and ungainly for use by specialist troops. If your job was running an artillery piece, emplacing a mortar, or stringing commo wire you needed something handier. The M1911A1 pistol of the day was a superb combat handgun, but it still left its operator at a disadvantage when confronted with enemy riflemen. 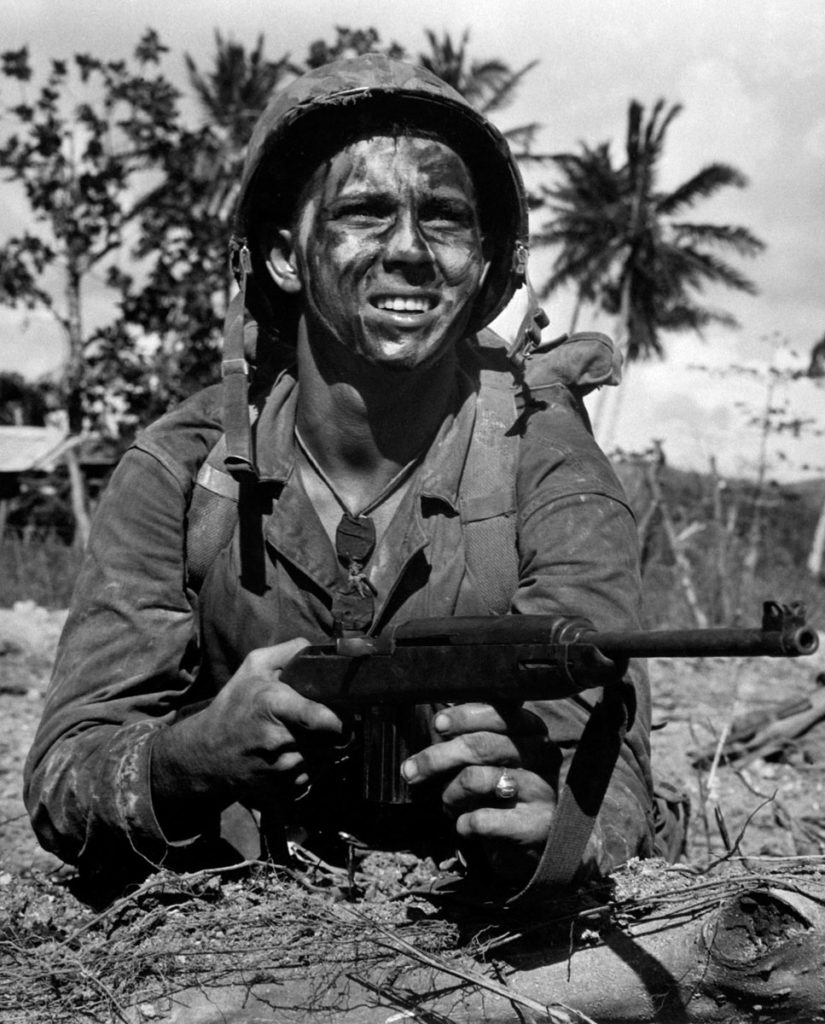 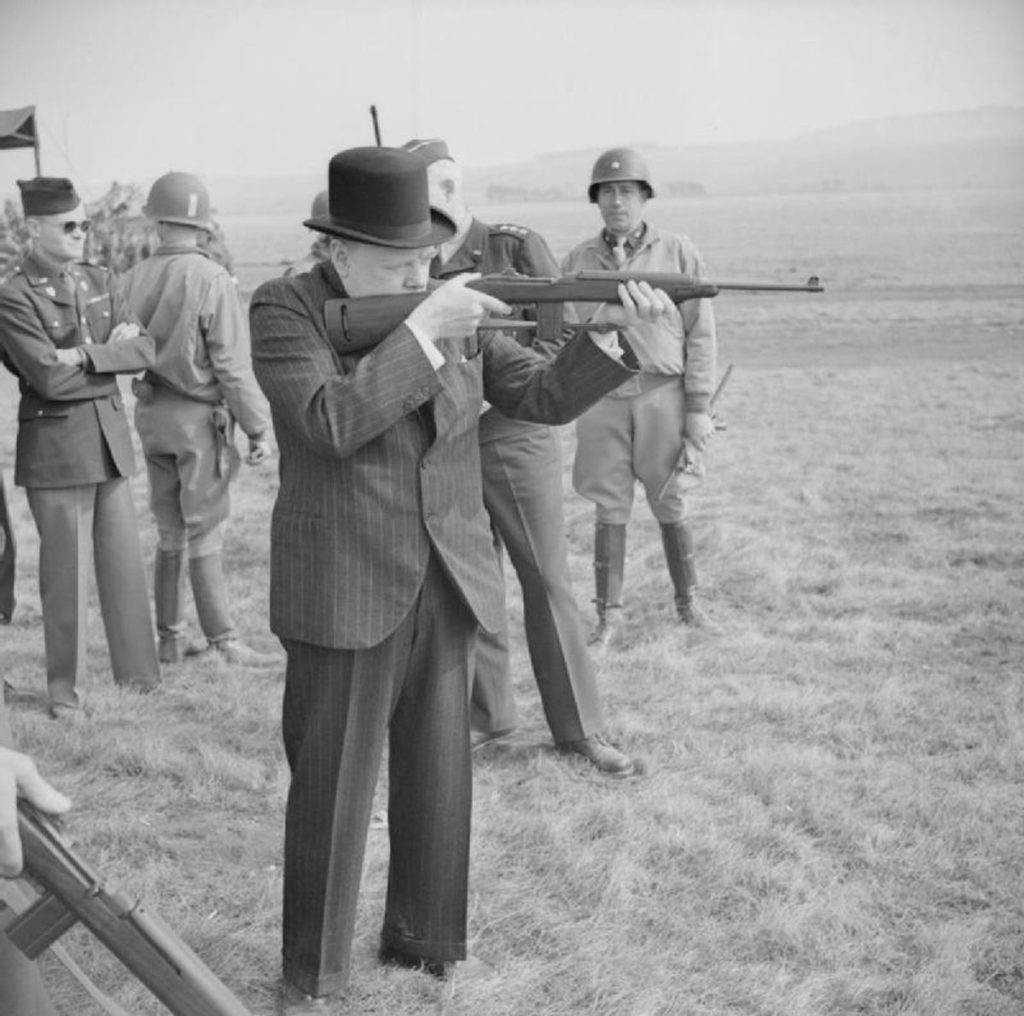 The original design was influenced by any number of interesting characters. One was David Marsh Williams, a convicted murderer who conjured gun designs while in prison. Another was Ed Browning, brother of the famed American gun designer John Moses Browning. Winchester ultimately bodged together the winning prototype in a mere thirteen days. 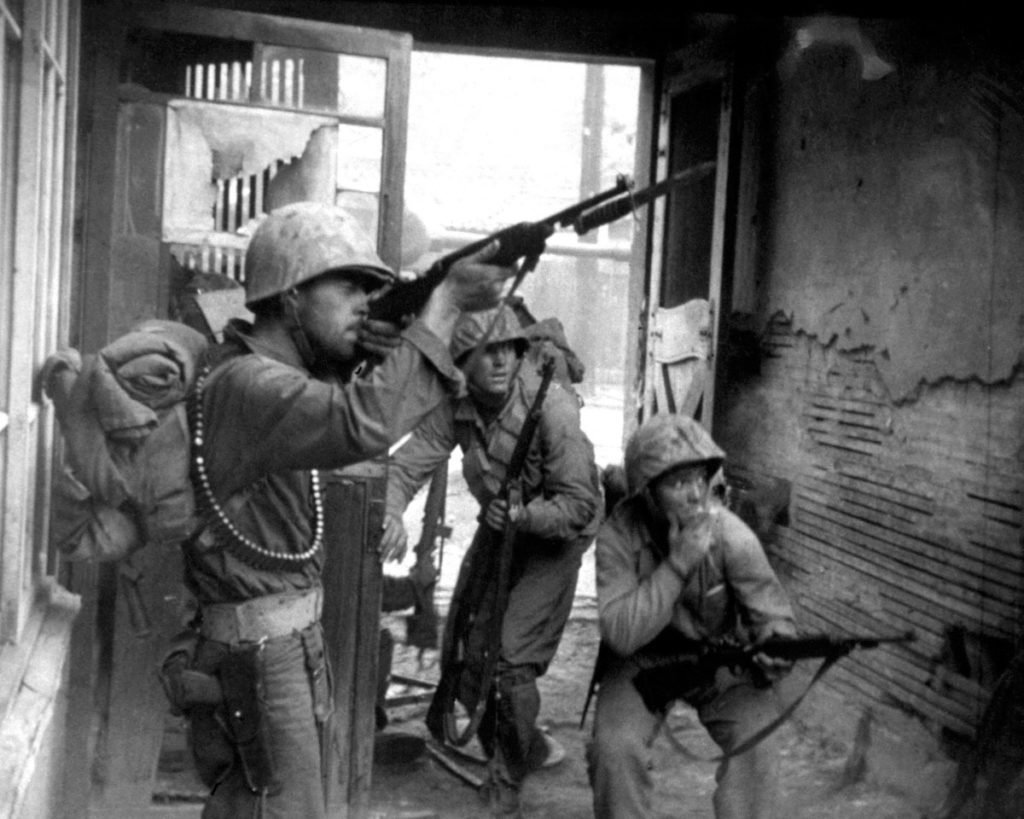 The selective fire M2 carbine was the first-line weapon with American troops during the Korean War.

The M1 carbine was as much a revolutionary cartridge as it was a rifle. The .30-carbine 7.62x33mm round pushed a 110-grain jacketed bullet to just a bit short of 2,000 feet per second. The rimless case sports the tiniest taper to ensure reliable extraction and feeds nicely through a steel box magazine. Almost all magazines used during WW2 were stubby boxes packing fifteen rounds onboard. Thirty-round curved magazines saw very limited use at the end of the war but were commonplace in Korea and later in Vietnam. 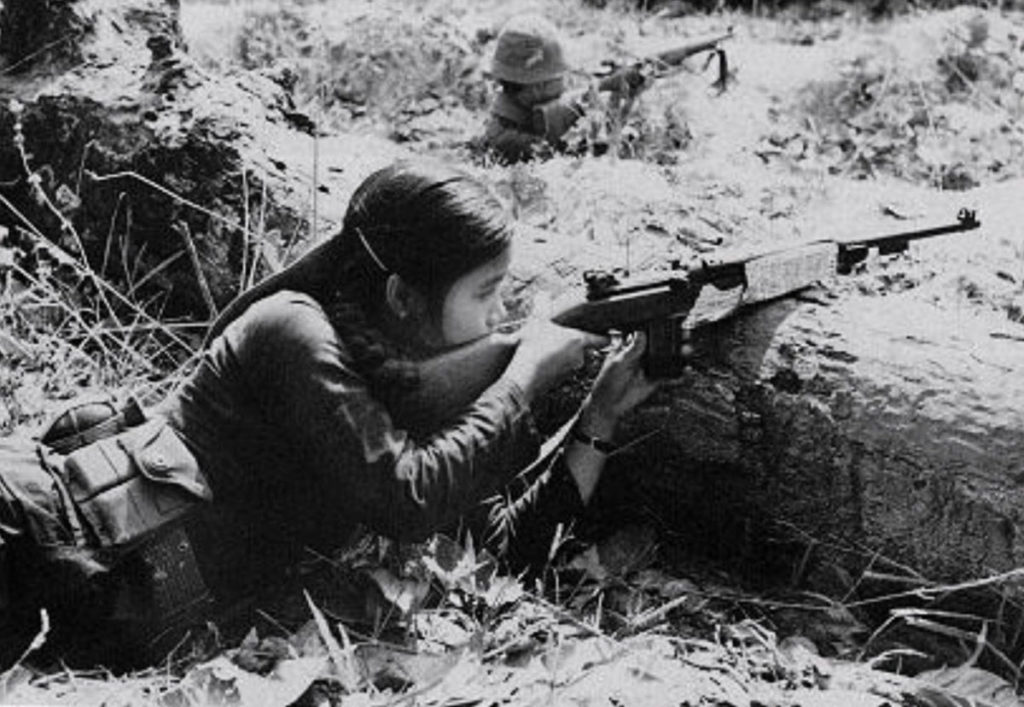 The carbine was popular with both ARVN and Viet Cong troops during the war in Vietnam. Here it is shown in the hands of a VC irregular.

The design of the M1 carbine evolved substantially over time, and there has arisen an Internet-based religion that orbits around the nuances of collecting. Ten different major manufacturers produced around 6.1 million carbines, making this lithe little rifle the most produced American small arm of the war. At the height of production, we were producing 65,000 carbines per day.

In an effort at enhancing the firepower capability of the weapon a selective fire version called the M2 carbine was introduced in October of 1944. Though there were purportedly very few of these versions to see combat before the end of the war, a friend’s dad found one unattended aboard a transport ship during the invasion of Iwo Jima and brought it home as a souvenir.

The M1A1 was an airborne-specific version that sported a side-folding wire stock. While the M1A1 certainly earns some cool points I have found the folding stock to be underwhelming in actual use. The bare steel is uncomfortable, and the stock lacks a positive retention device when either deployed or stowed.

The M3 was the same basic carbine fitted with an early IR night scope and flash hider. These cumbersome rigs had a short range, around 75 meters. However, they yielded superb service during night operations in the Pacific islands at the very end of the war.

Early carbines sported a pushbutton safety alongside the pushbutton magazine release. This caused some troops to inadvertently jettison their magazines when attempting to press off the safety. I have done this myself before. A later rotating safety lever successfully addressed this deficit. The vast majority of WW2-era carbines lacked a bayonet lug. These appendages were added later during the rebuild process. Early rear sights consisted of a simple pivoting dual aperture, while later versions were easily adjusted for both windage and elevation.

The M1 carbine was a lightweight maneuverable rifle to be used by second line troops as a sort of Personal Defense Weapon. This is an early version produced by the Rockola Music Company.

The M1 carbine is a joy to run. Lightweight and maneuverable, the gun is all but recoilless and turned out to be adequately reliable under hard use. A friend who served as an Infantry officer in Korea traded his M2 carbine for an M1 Garand out of reliability concerns but admitted that the M2 remained popular for its modest weight and full auto capability.

The charging handle reciprocates with the bolt and can be manhandled if things get sticky. The trigger is pleasantly crisp, and the gun renders proper combat accuracy out to a couple hundred meters. The bolt does not lock to the rear on the last round fired, though there is a manual bolt latch that can be used for inspection and cleaning. I find that the low bore axis lends itself to decent accuracy but also results in a fairly cluttered sight picture given the ample protective fencing built around the sights. 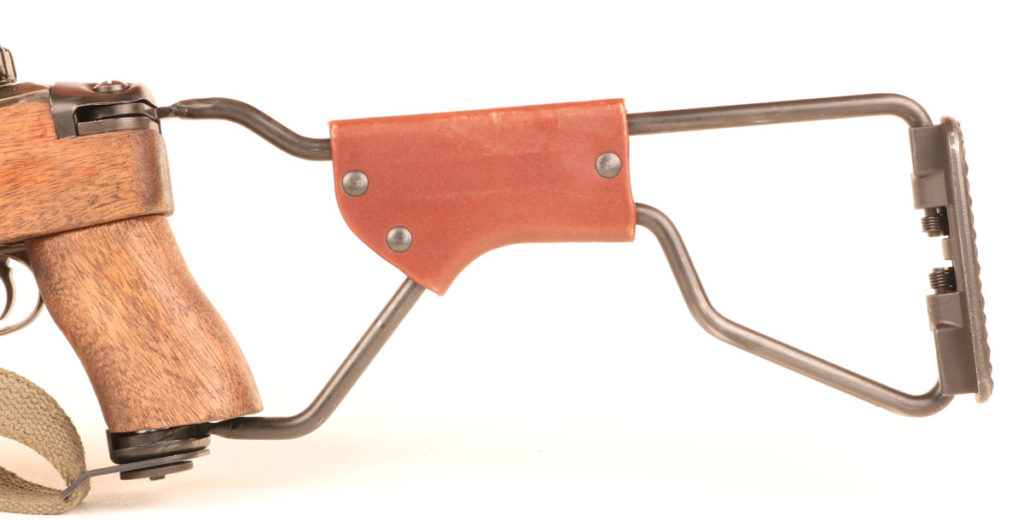 The folding wire stock of the M1A1 was fairly rickety in action and uncomfortable to use. 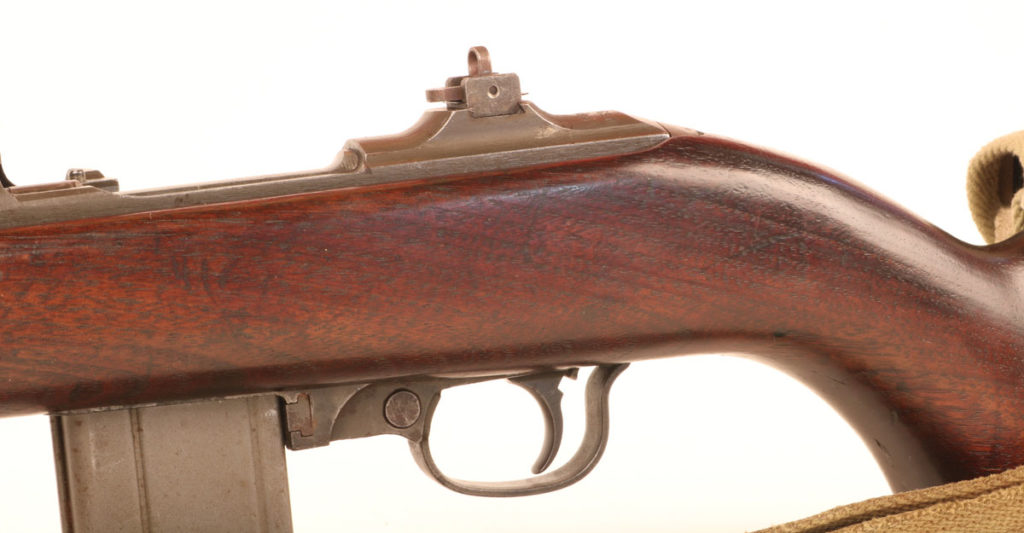 Early carbines had both the pushbutton safety and magazine release located side by side. This caused some consternation given to the tendency to drop the magazine when trying to press off the safety in a hurry. 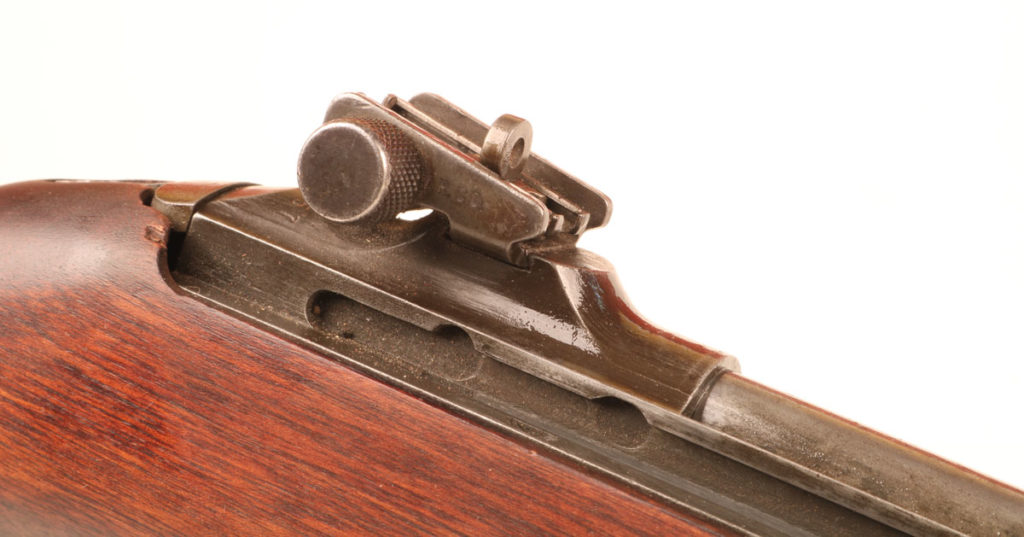 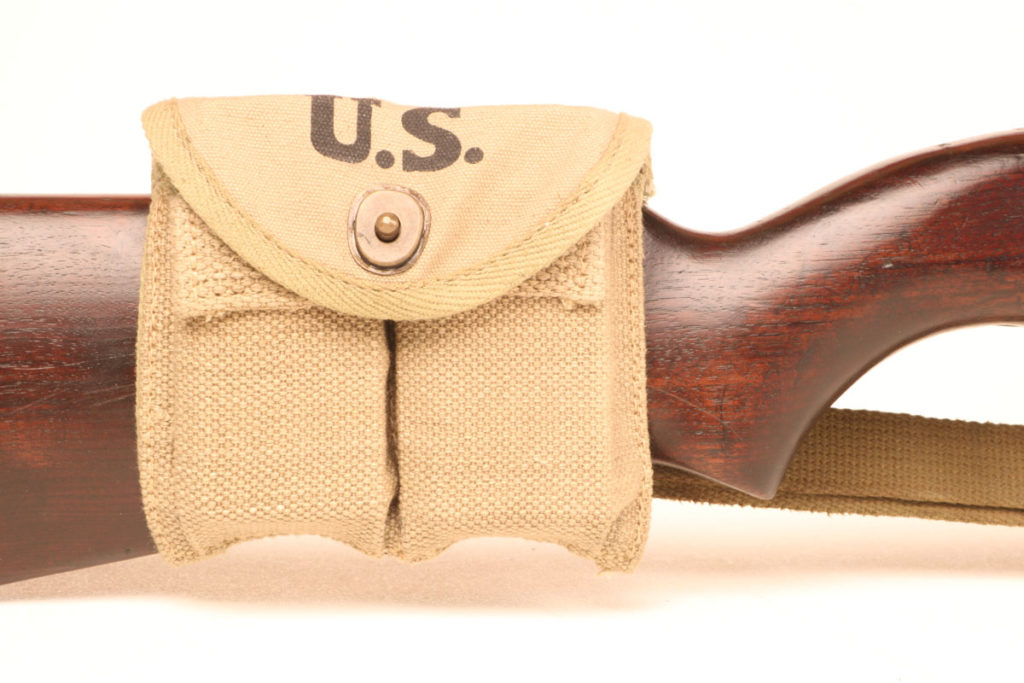 The two-cell M1 carbine magazine pouch carried a brace of fifteen-round magazines and could ride on either the belt or the stock of the rifle. 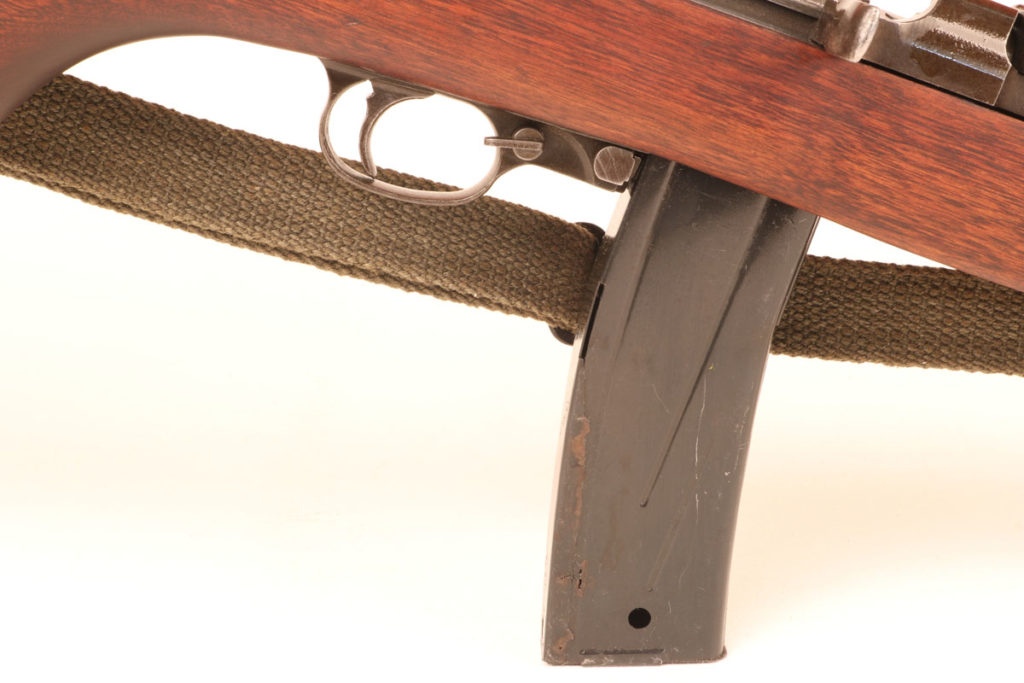 Later safeties were rotating levers rather than the earlier pushbuttons. 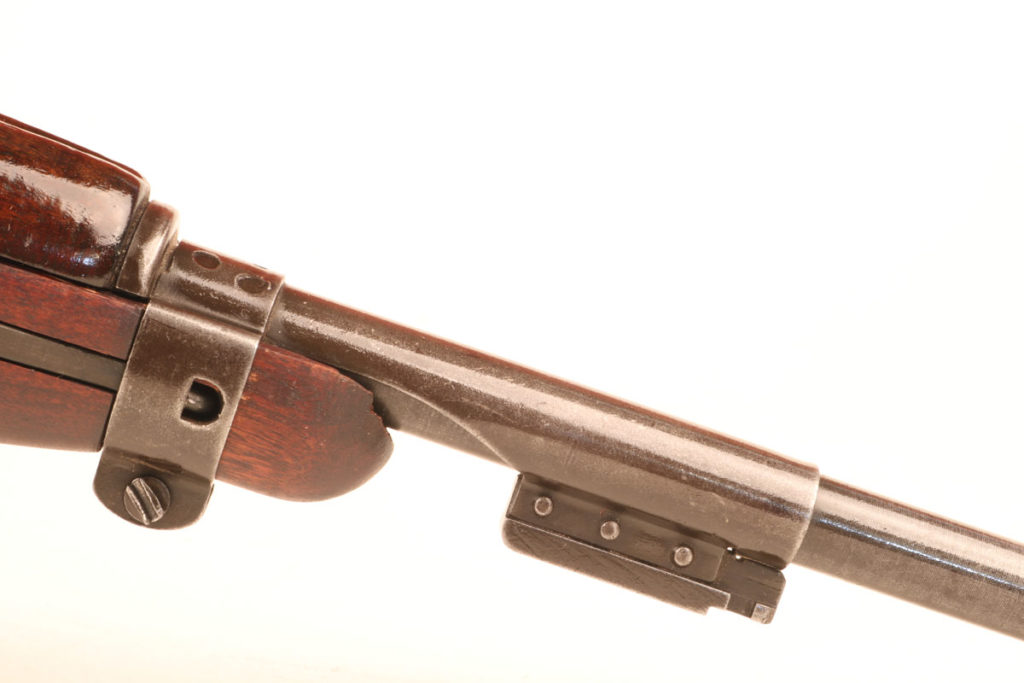 Bayonet lugs were added to carbines during post-war refurbishment programs. 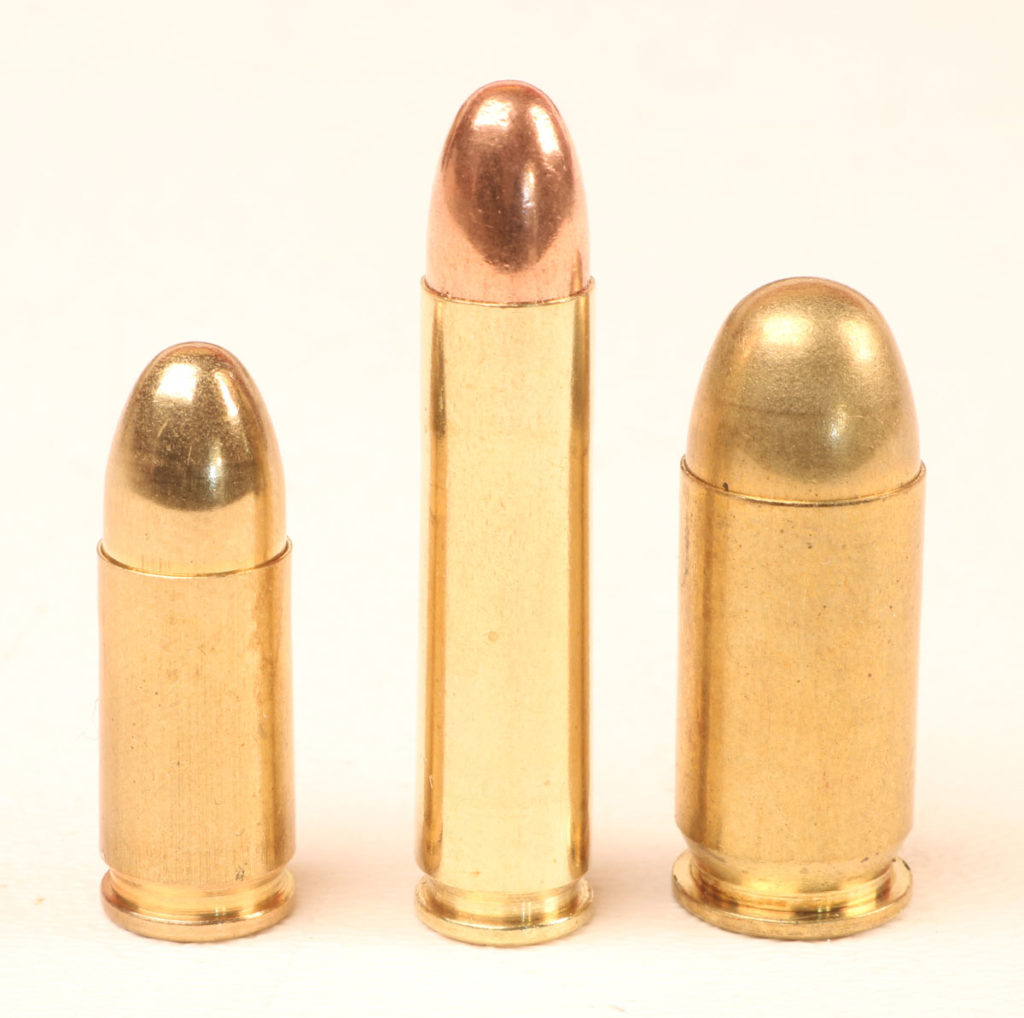 The 7.62x33mm carbine cartridge was a significant improvement over common handgun rounds in use at the time. From left to right are the 9mm Parabellum, the .30 carbine, and the .45ACP.

Jack Lucas was in combat for less than forty-eight hours. During that time he became the youngest member of the Marine Corps to be awarded the Medal of Honor. He carried more than 200 pieces of Japanese shrapnel within his body up until the day he died of leukemia in Hattiesburg, Mississippi, at the age of 80. He is the only soldier in military history with whom I am familiar to dive on two live grenades simultaneously and survive.

When Jack and I first exchanged correspondence he found out I was a veteran and wrote, “Thank you for your service.” As a nation how do we make heroes like this? I get choked up just thinking about his story.

The M1 carbine has been derided for being insufficiently powerful to serve as an Infantry combat rifle. This is an unfair characterization. The carbine was never intended to supplant the M1 Garand. It was intended to replace the M1911A1 handgun and in this capacity was simply superlative. A friend who carried one for nearly a year in combat in Europe during World War 2 once told me that the carbine lent itself to multiple rounds on target very quickly and was completely effective in practical use. Given his pedigree, I would trust his opinion.

The M1 carbine is a fantastic recreational plinking platform that will also render proper service as a home defense arm even 76 years after its introduction. Examples can be had at a variety of price points right here on GunsAmerica, and the gun remains in production today. Proven, maneuverable, lightweight, and fun, the M1 carbine served the military well through three wars.

Group size represents the best 4 of 5 shots fired from a simple rest over open sights at fifty meters. Velocity is the average of three shots clocked through a Caldwell Precision Ballistic Chronograph oriented ten feet from the muzzle.