WATCH: No Charges for Police Officer Who Shot, Killed Vietnam Vet in His Home 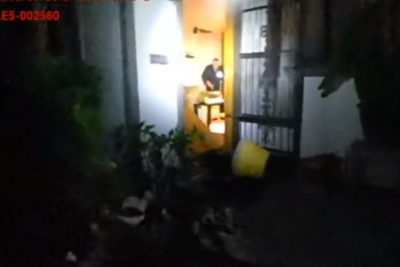 Black was shot while holding a handgun, which he had been using to defends his grandson. (Photo: Screenshot, APD)

No charges will be filed against an Aurora Police Department (APD) officer who shot and killed a Vietnam veteran who was defending his grandson from a violent attack, Colorado’s 17th Judicial District Attorney’s Office announced this week.

On July 30, 2018, Officer Drew Limbaugh shot and killed Richard “Gary” Black at his home in northwest Aurora. The District Attorney determined in a 26-page report that the shooting was justified under Colorado law because the officer on scene could reasonably have believed his life was in danger.

“Officer Limbaugh stated that he felt like he had to shoot the man, because it was not an option to ‘wait and see what happens,'” the report stated. “He could not recall whether the man pointed the gun at him.”

The APD has also released body cam footage showing the shooting and its aftermath.

In the video, officers can be seen approaching the house while shots can be heard coming from inside. When officers see Black holding a handgun, they yell at him to drop it.

Black, who was hard of hearing, does not obey the officers’ commands or acknowledge their presence. He raises his flashlight, and Officer Limbaugh fires his weapon.

Shortly before Black died, he told the officers that “my son and my grandson are in the bathroom with the perpetrator,” the district attorney’s report said.

The incident began when 26-year-old Dajon Harper left a nearby party and, for reasons that remain unclear, broke down Black’s door and grabbed Black’s grandson, who had been sleeping on the couch, according to the Denver Post. Harper took Black’s grandson to the bathroom and tried to drown and rape him, while Black and the boy’s father attempted to wrestle the boy away.

“I won’t go into the graphic details other than to say the child was violently assaulted,” Aurora Police Department Chief Nick Metz said at the time.

Black was hit in the head with a vase during the course of the fight, and neither man was able to pull Harper off the boy. Black retrieved a 9mm handgun and shot Harper, but by that time other people from the party had arrived at the house.

Metz told reporters that his officers arrived to a “violent” and “chaotic” scene, and it isn’t clear from 911 and dispatch calls whether they had been given a clear description of the intruder or the other individuals at the house.

“The 911 telephone call by Mrs. Black was difficult to understand as large portions are unintelligible,” the Black family said in a statement. “The family acknowledges the APD’s position that the responding officers did not receive a description of the intruders.”

In the months since that statement, the Black family has hired an attorney, Qusair Mohamedbhai. Mohamedbhai told local media that the family is devastated no criminal charges are being filed against the Aurora Police Department, and they may consider a civil suit.

“Chief Metz has informed the community that no law enforcement identified themselves as police,” Mohamedbhai said. “Shots were fired within seconds of police arriving… police were in darkness when they shot. Mr. Black took no aggressive efforts toward any police officer. The gun was down the entire time – these facts are not stated in the report.”

Richard “Gary” Black was a Vietnam War veteran and Bronze Star and Purple Heart recipient. He was laid to rest in August in a full military funeral.