There is a spot for big bores in most every gun enthusiast’s collection. For those who just like to burn powder at the range, hard-hitting rifle cartridges never fail to put a smile on the face of the person behind the gun. On the other hand, every hunter needs to have a gun that they can trust with their life when they go after dangerous game. Like many, I just so happen to be both of these guys. This made the Ruger AR-556 MPR 450 Bushmaster a good idea in my mind, but it needed to run through its paces to be able to take a place on the winner’s podium. I am happy to say that it performed well and gained bragging rights, but I’ll get into the details. 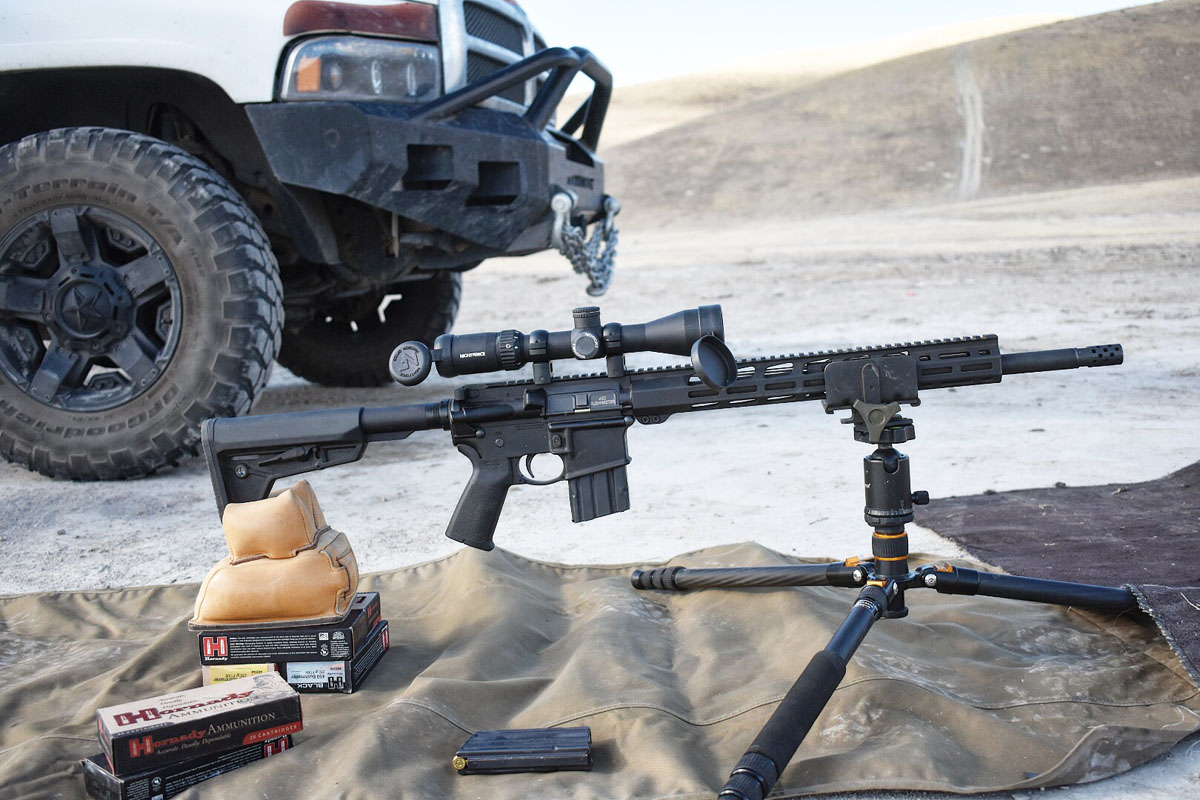 The Ruger AR-556 MPR 450 Bushmaster is packed with user-friendly features, making it a pleasure to shoot and it is sure to turn heads at the range. This rifle is topped with the Nightforce SHV F1 3-10 power optic for accuracy testing. The ammo tested was the Hornady 250 gr.

First of all, “Why 450 Bushmaster?” The answer to this question that many of you undoubtedly have is simple: power. The 450 Bushmaster averages about 2700 foot-pounds of energy at the muzzle. To put this in perspective, a 75-grain bullet from a 5.56x45mm NATO produces approximately 900 foot-pounds at the muzzle. This means that from basically the same gun it is possible to get 3x the power of a stout 5.56x45mm NATO. As mentioned earlier, this is a very big deal to those who may have intentions of hunting with this cartridge. In a matter of a second or less, this gun can produce 13,500 foot-pounds of stopping energy when using the factory-supplied five round magazine. Numbers are great and all, but here is a link to a video that demonstrates the difference in power between the 450 Bushmaster and the 5.56 NATO (similar to the 223 Remington) round. 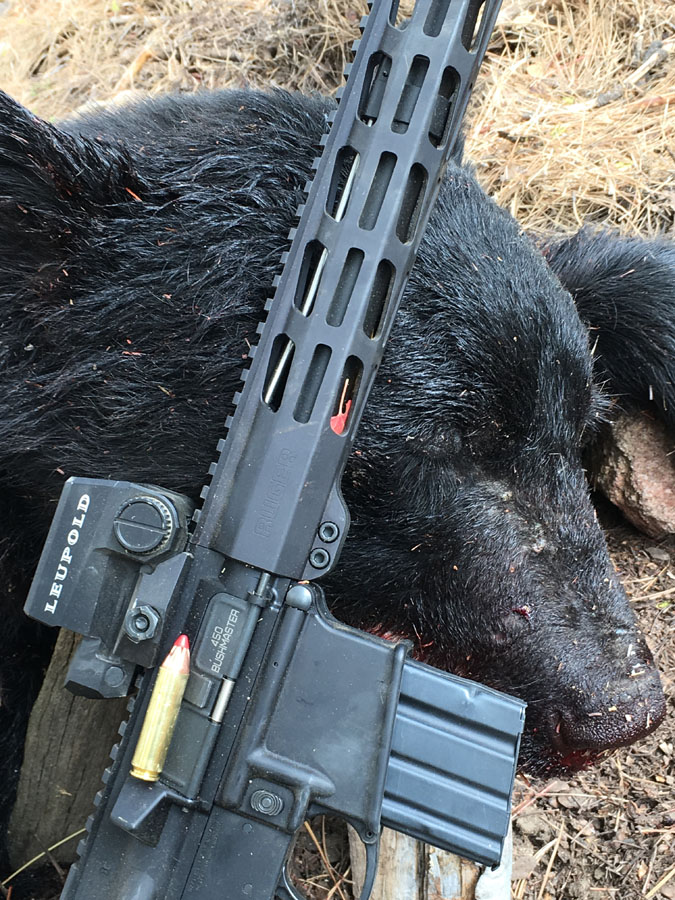 Now the 450 Bushmaster round is great and all, but what about the rifle itself? If you want to read about the features that Ruger is eager to highlight, click here.

The features that I noticed right away and appreciated were a bit different. The rifle comes with a short muzzle brake on the end. This can be appreciated by any shooter that isn’t a bit masochistic. Next thing I noticed may only be picked up by someone who has built an AR in the past, but the handguard is not bolted to a barrel nut. Instead, it is clamped around the barrel nut. This stood out to me as a good feature because when you need to have a handguard line up with the barrel nut bolts, it often either takes shims or over-torquing of the nut in order to get everything to line up properly, and that just isn’t good construction. Moving rearward, I then noticed the Magpul furniture. The rifle is outfitted with an MOE grip which I found not only comfortable but handy for storing tax stamp paperwork inside for a suppressor. Also, it has an MOE SL carbine stock that has a flush cup sling attachment point which is complemented by another attachment point on the forward end of the handguard.

Overall, I was impressed at a glance by the construction of the rifle itself. It is also my understanding that the bolt construction is beefier around the lugs in order to ensure reliability when handling the bigger 450 Bushmaster round that it is chambered for. 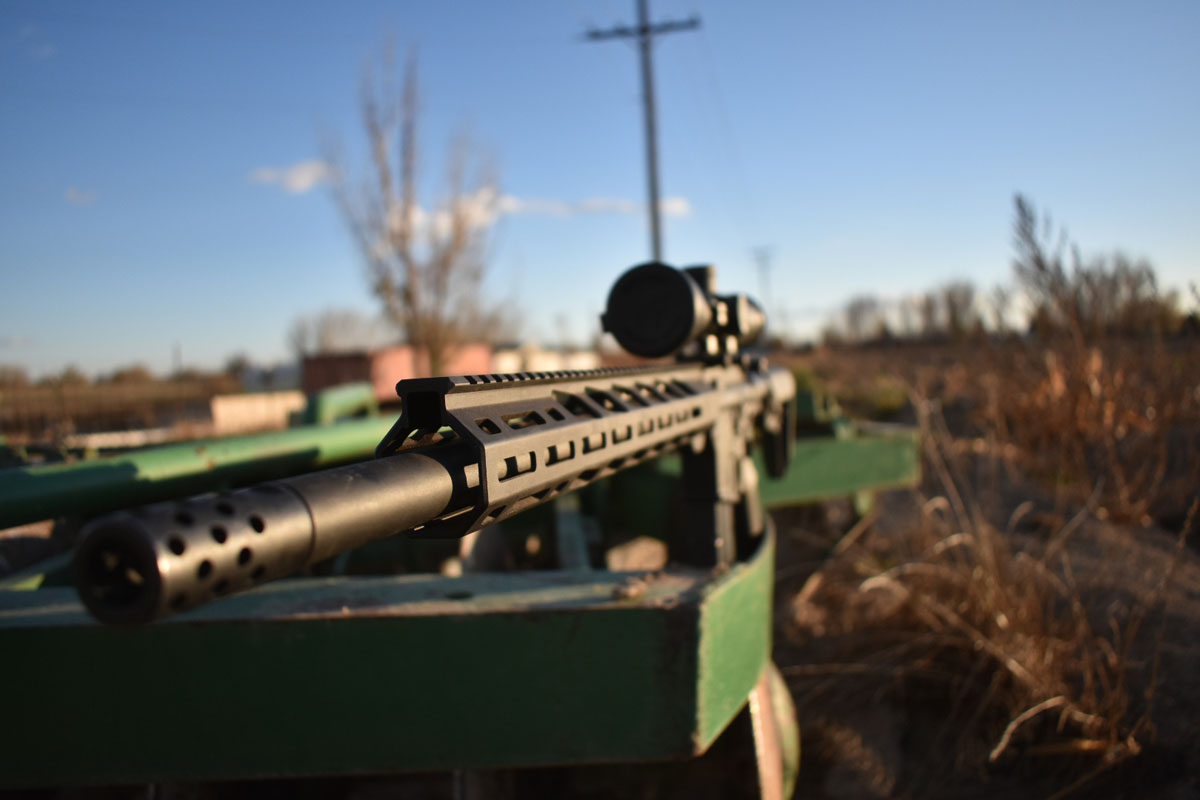 The muzzle brake that comes standard on the MPR does more than enough to make shooting this large caliber pleasant but makes it no less impressive. Also, from this perspective, it can be seen just how slim the handguard is which makes for great ergonomics.

The particular rifle that I received was perfect except for one small flaw that I am willing to assume is unique to my particular gun. I noticed that the gas block was lightly in contact with the handguard. You may say, “What’s the big deal about that?” and my answer is as follows: The Ruger AR-556 MPR comes with a free floating barrel. This is conducive to accuracy because any kind of stress that is placed on the handguard is not transferred to the barrel. In a specific example, when a bipod is placed on a non-free floated handguard, it puts an upward stress that also pushes on the barrel and gives vertical stringing on the target downrange. Keep this in mind when I get to the section about this rifle’s accuracy performance. 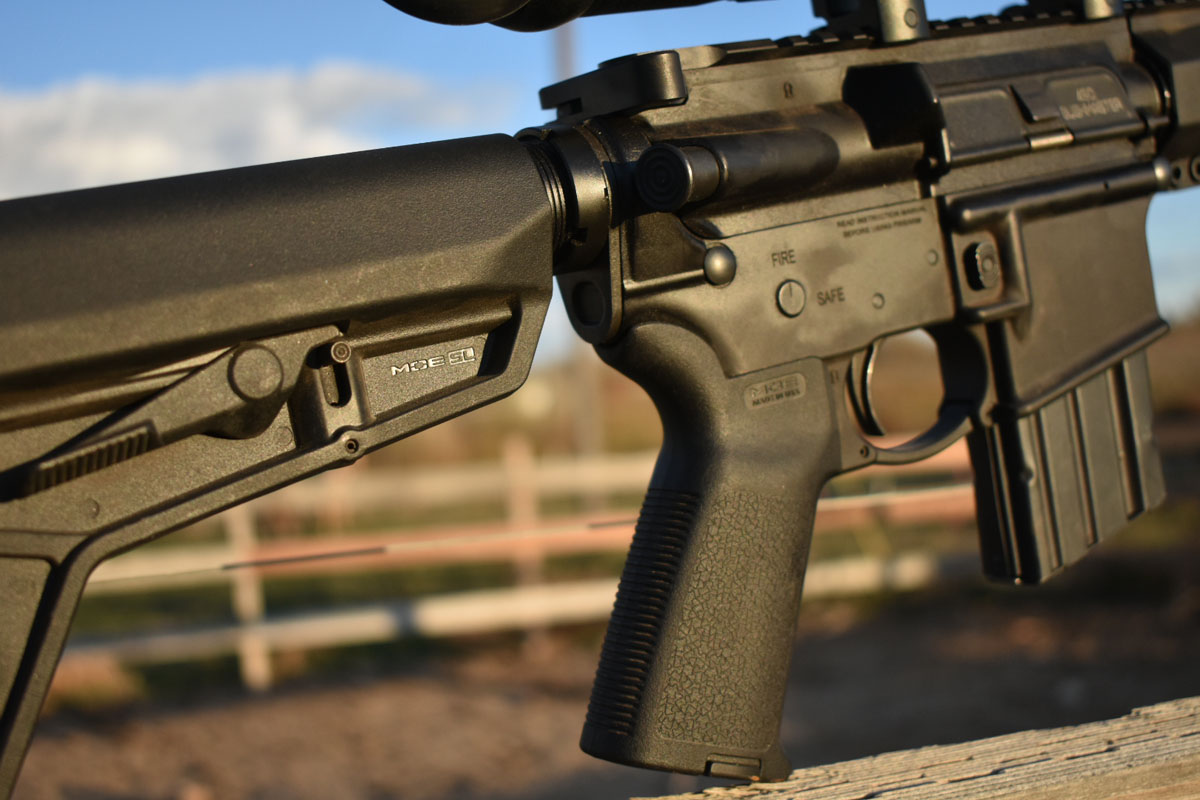 The MPR comes with Magpul MOE furniture. This gives the rifle a high quality and sturdy feel when compared to the standard mil-spec type on most factory AR-15 style rifles.

I feel that the trigger is such an important part of the rifle that it deserves its own section to be discussed. I have shot the older models of the Ruger AR-556 and have been extremely underwhelmed by the trigger. However in this new model, the MPR, Ruger must have heard a few of the people’s complaints and paid special attention to this part of the gun. Props to Ruger as a company for doing this. The trigger is extremely impressive for what I would consider an entry level AR15. It is listed on Ruger’s website as a 4.5 pound two stage trigger, but because of its crispness and lack of creep, it feels lighter than some 3-pound triggers that I own. Consequently, I have no plans of changing this trigger out for an aftermarket trigger in the future, which I typically end up doing for most all rifles. Because of this in itself, the new Ruger AR-556 MPR puts a huge smile on my face and is a pleasure to shoot.

As mentioned earlier, I believe that my particular rifle may perform slightly less well in this area than the rest because of the gas block being in contact with the forend. However, I was not disappointed in its performance at the 100-yard line. I want to mention that my favorite shooting sport category is long range shooting, so I have extremely high standards on what a rifle should do. If you are like me, you may be hoping that I might say that this is a sub MOA gun. But I want to bring up something first: Consider what the uses of a carbine length, 45 caliber rifle could be. It could possibly be a truck gun used to punch holes through thick objects if the need arises. It could be used to hunt big game in uncomfortably close quarters where stopping power matters. It could also be used as a home defense rifle if a person wishes in order to stop threats in their tracks. It can fill all these roles, but long range is not one of them. Because of this, I decided before shooting the rifle that I would be extremely happy with anything that I could keep grouped in a dinner plate at 100 yards, and I promise it did better than that in the end. 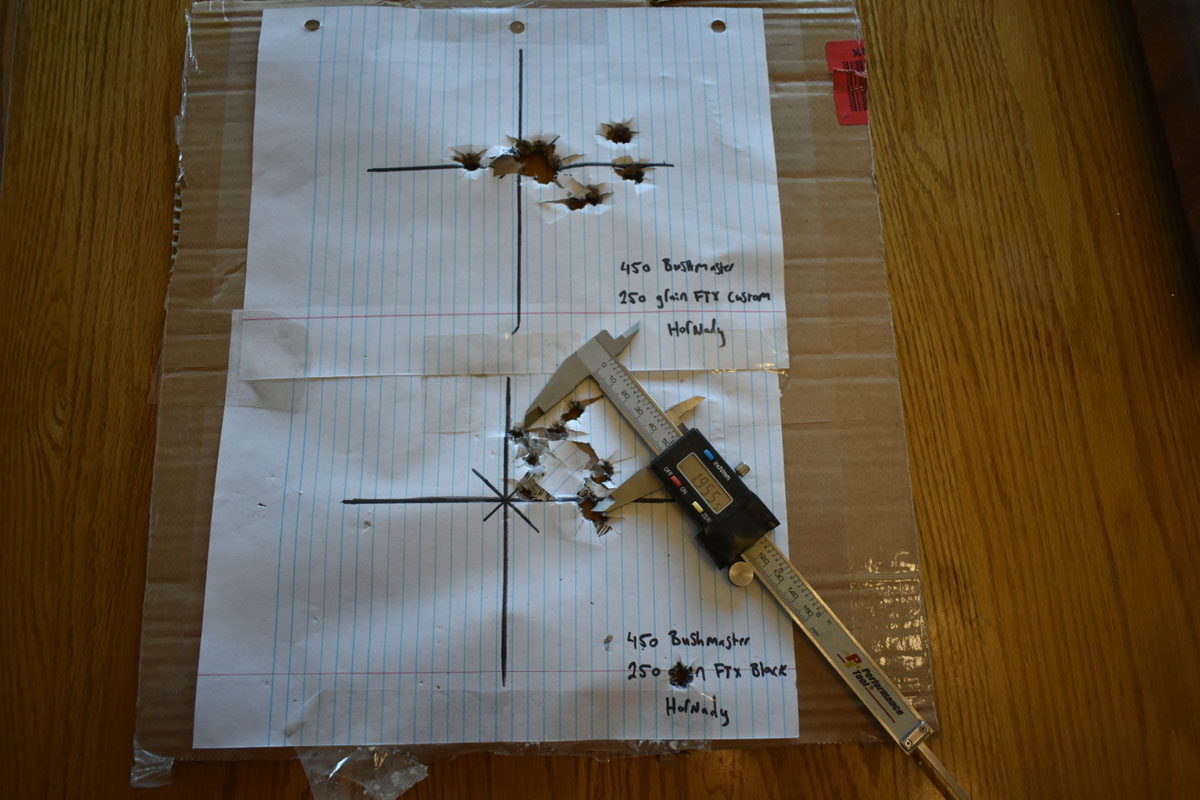 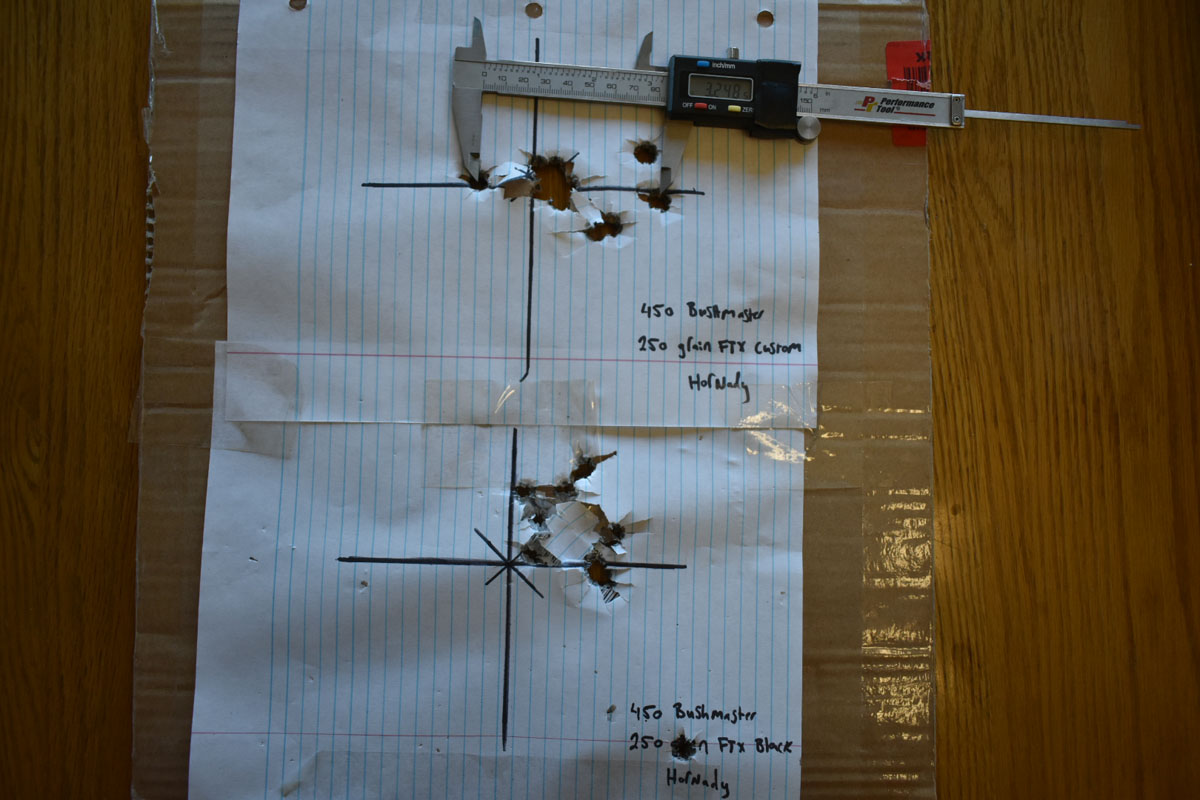 I tested the accuracy and reliability of the rifle with two different types of readily available ammo. These were both made by Hornady; the 250-grain FTX Black and the 250-grain FTX Custom. The cost of the Hornady FTX Black 250 grain 450 Bushmaster ammunition is listed on MidwayUSA for sale at $1.35/round. Also, the Hornady FTX Custom 250 grain 450 Bushmaster ammunition can be found for $1.45/round. Between both of these ammunitions, I had extreme reliability which is defined by zero feeding issues, zero ejection issues, and the like. I originally had a red dot sight mounted on this rifle to fit my ideal function. But for the test, I threw on the new Nightforce F1 SHV 3-10 power optic. The FTX black printed a 10 shot group at 100 yards that measured two inches. The FTX custom printed a sort of confusing 10 shot group that measured just over three inches but had 5 shots within 1/2 inch. 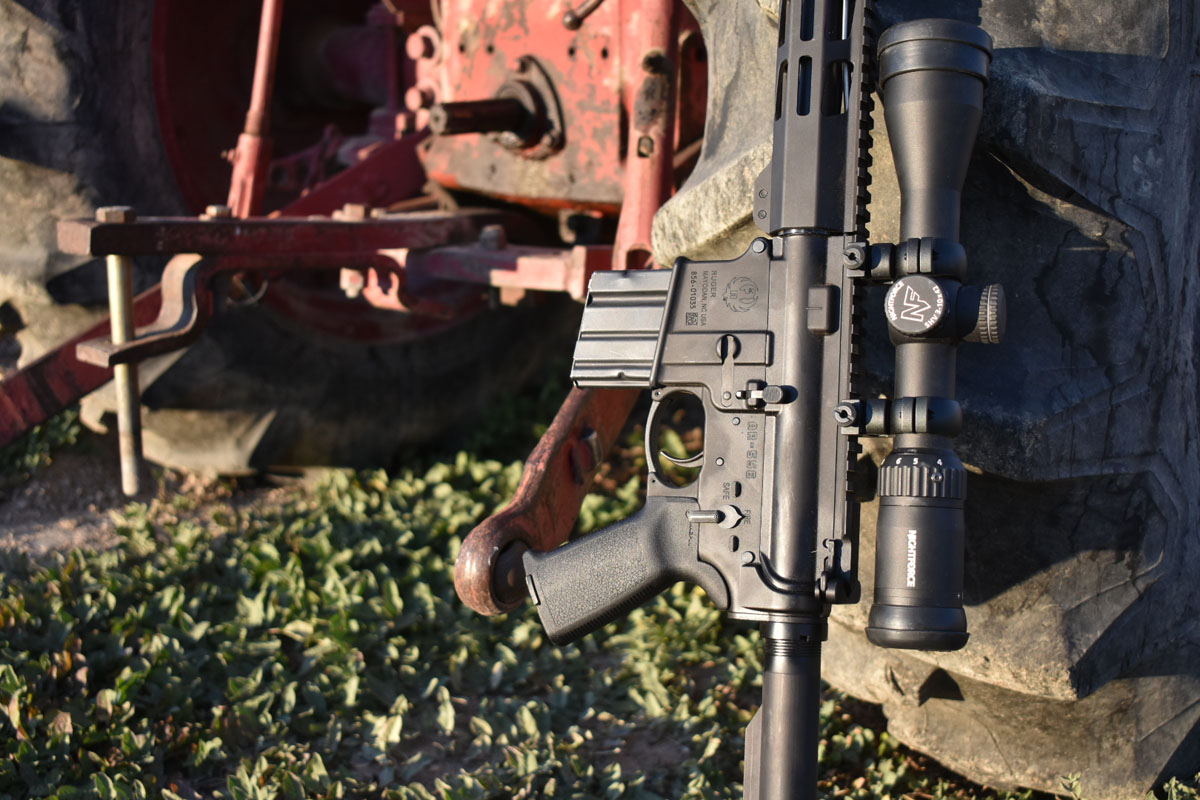 The MPR is as reliable as it is sturdy. I have beat the tar out of this gun in all scientific sense of the phrase. It has been on multiple bear hunting trips, beat around in a backpack for miles and drug through the dirt and foliage and managed to perform with zero malfunctions to date.

I am a fan of building your own rifles in order to get the quality and features that you want in a gun, but I must say that I am impressed with Ruger’s AR-556 MPR in 450 Bushmaster and I will be buying one for myself soon because of this. The rifle is constructed to handle the extra power that the 450 Bushmaster produces over the 5.56x45mm NATO round. It also is equipped with quality furniture, is lightweight and comfortable to shoot. The trigger is crisp and light and the gun itself is reliable. On top of it all, the accuracy that I would want this rifle to have is definitely there. If any of my friends were interested in owning a big bore AR-15 style rifle, I would be more than comfortable and likely to point them toward this particular model made by Ruger. 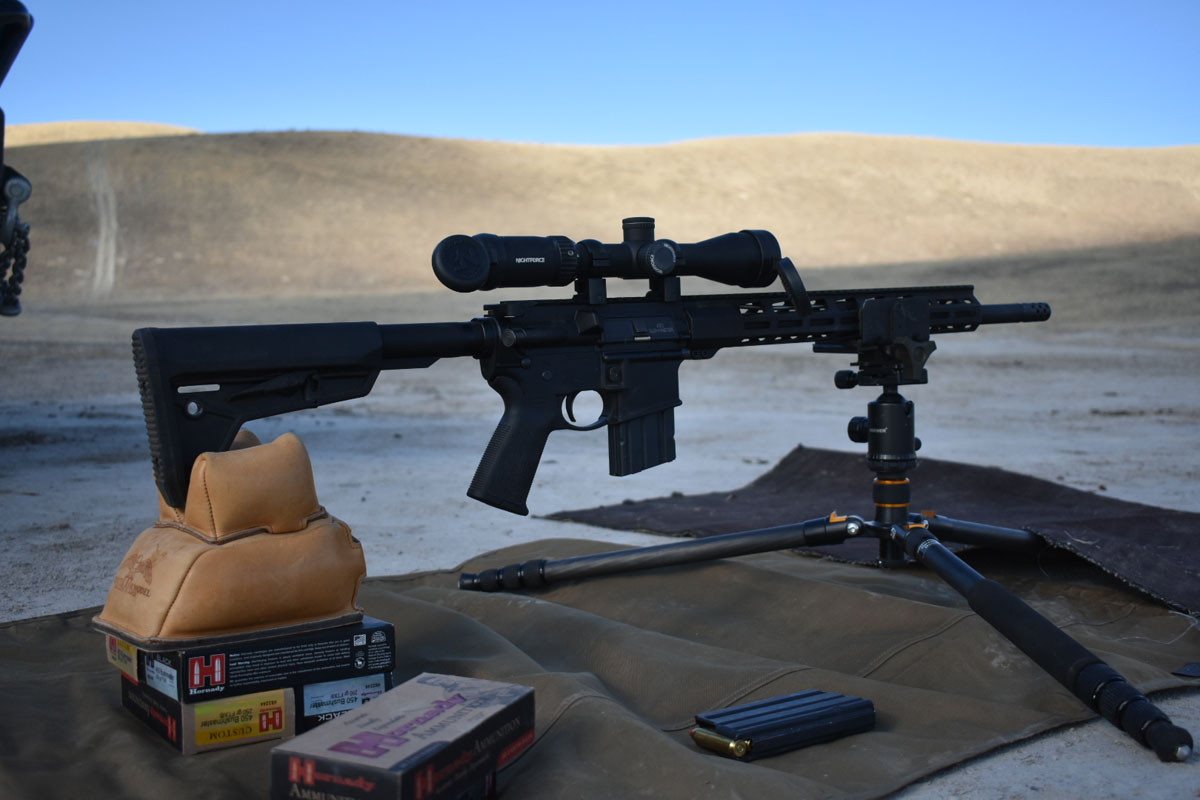 A must have for any gun collector or enthusiast, the new Ruger AR-556 MPR in 450 Bushmaster is a pleasure to shoot as well as look at.

***Shop GunsAmerica for your next Ruger***

Next post: Big Wheel Keep on Turnin’: Running the Revolver for Self-Defense