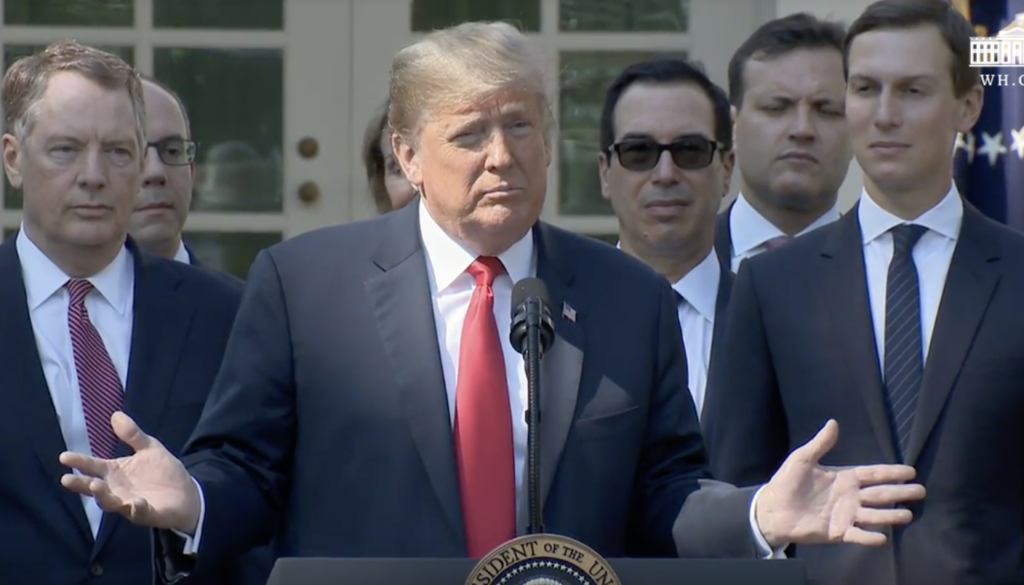 President Trump this week signaled that a federal ban on bump stocks is coming soon.

Trump gave the update while taking questions from the media at Monday press conference at the White House.

“In order to eliminate — terminate — bump stocks, we have to go through a procedure,” explained Trump. “We are now at the final stages of that procedure — in fact, the lawyers were just telling me — and over the next couple of weeks, I’ll be able to write it out. But you can’t just write it out because rules and regulations in this nation are really tough, even for something like that.

“So we’re knocking out bump stocks,” Trump continued. “I’ve told the NRA, I’ve told everyone. Bump stocks are gone. But to do it you have to go to public hearings — which we’ve had.

With respect to “public hearings” and “procedure,” Trump was referring to the Notice of Purpose Rule-Making (NPRM) initiated by the Dept. of Justice in March of 2018 that sought to regulate reciprocating stocks as “machineguns” under the National Firearms and Gun Control Acts.

SEE ALSO: Vermont Police: ‘Turn In Your Bump Stocks… Or Else’

As part of the process, the public and the firearms community were permitted to weigh in and provide comment to the regulators at the Bureau of Alcohol, Tobacco, Firearms and Explosives. However, the agency is under no obligation to listen to or follow those comments when it comes to finalizing the rule. The comment period ended back in June of this year.

The ATF estimates since 2011 the public has spent approximately $96 million on bump stock-type devices, with between 280,000 – 520,000 currently in circulation.

When the new rule takes effect bump stock owners will be forced to surrender their property to authorities or render the devices permanently inoperable.  Failure to do so could result in fines and even jail time.  Unlawful possession of a machinegun carries a prison sentence of up to 10 years behind bars.

No compensation will be offered as part of the rule change.  Bump stock owners will have to bear the financial burden, take the loss.

As noted in previous GunsAmeria articles, the ATF had on two separate occasions issued letters clearly indicating that reciprocating stocks did not qualify as machineguns and were therefore not subject to NFA/GCA regulations.

“The stock has no automatically functioning mechanical parts or springs and performs no automatic mechanical function when installed,” ATF wrote in 2010, in response to a submission by former bump stock manufacturer Slide Fire.

Yet despite this established precedent and despite statements from current and former ATF employees saying that a ban on the devices had to come from Congress because only it had the power to change the law, the Trump administration with the support of at least one high-profile gun-rights organization found a way to get the job done.

As Trump said Monday, “In a very short period of time, bump stocks will be ruled out.”