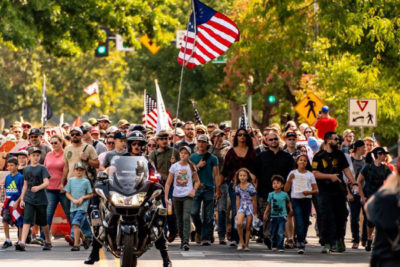 What appears to be the year’s largest pro-Second Amendment rally took place in Boise, Idaho, this weekend, drawing thousands of supporters from at least five states through the streets of Boise to the capitol building. Rallygoers carried rifles and handguns along with American and Gadsden flags, and all came out to show their support for the right to keep and bear arms.

“They want to ban all semi-automatic firearms, this is the battle that we’re in and if you haven’t noticed, the anti-gun left wants your guns,” Greg Pruett, President of the Idaho Second Amendment Alliance (ISAA), said from the podium. “They want your guns, they want to take them away and they think that you and me are the problem.”

Estimates varied as to the exact number of attendees. Boise State Public Radio reported “hundreds” gathered to march in Boise, while the ISAA estimated in a Facebook post that 2,000 people attended. The Idaho Statesman quoted Pruett putting the number at “nearly 1,000.”

Whatever the exact number, Pruett is confident that Saturday’s rally marked the largest pro-2A march this year.

The event mirrors similar rallies across the country organized to counter the anti-gun “March for Our Lives” protests held in response to the Parkland massacre.

“It’s a very emotional topic. It’s a very difficult topic for people to sit down and have a conversation and not have it turn into a shouting match,” Pruett told the Statesman. “(But) the bad guys don’t care about the laws. They’re going to do whatever they want.”

Another of the rally’s speakers, attorney and author Alexandria Kincade, echoed Pruett’s sentiment.

“If we aren’t strong and we don’t know what we’re talking about, it could very well happen in Idaho,” Kincade said. “They think that if they pass another law against us, the law-abiding citizen, that somehow that’s going to stop the next school shooting. … We don’t know who that next person is, who is going to act out and cause harm in society. We can’t predict that. But we can defend ourselves, and you can’t take means to defend ourselves away from us, the law-abiding citizens.”

Counter-protesters made their appearance in Boise as well. The Statesman reports that a “handful” of Boise High students took to the streets to speak truth to power.

“We’re basically sick and tired of going to school and being scared. Every day it crosses our mind what could happen at school and we risk it anyway,” junior Searra Ade said. “We want to make sure that people who are mentally ill or impaired or anything like that don’t have access to something that could kill somebody.”

Ade isn’t the whole story, of course. Several commenters on the ISSA Facebook page noted the poor conduct among the counter-protesters.

“There was the contingent of four tween-ish boys who made their way through afterward when the crowd had partially dispersed doing their little ‘F@#$ Trump’ thing,” said Facebook user A.J. Ellis. “I hope they don’t cut themselves on all that edginess.”

A few of the youngsters might have done their protesting a day early. Pruett said in a Facebook live video that the day before the rally, someone slashed the tires on his wife’s van.

“We believe at this point it was probably a targeted attack against my family,” Pruett said.

Next post: What I Love & Hate About the Galco Jak Slide Holster