To purchase Diamondback Firearms products on GunsAmerica.com click on this link:  https://www.gunsamerica.com/Search.htm?Keyword=Diamondback+firearms&pagenum=1 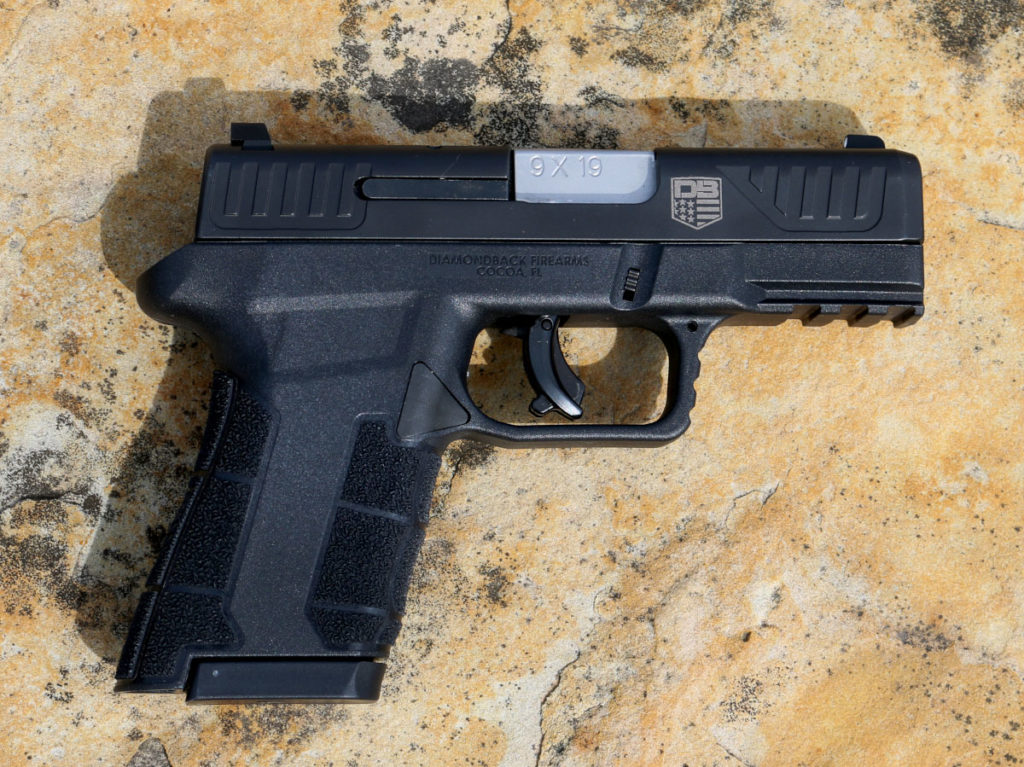 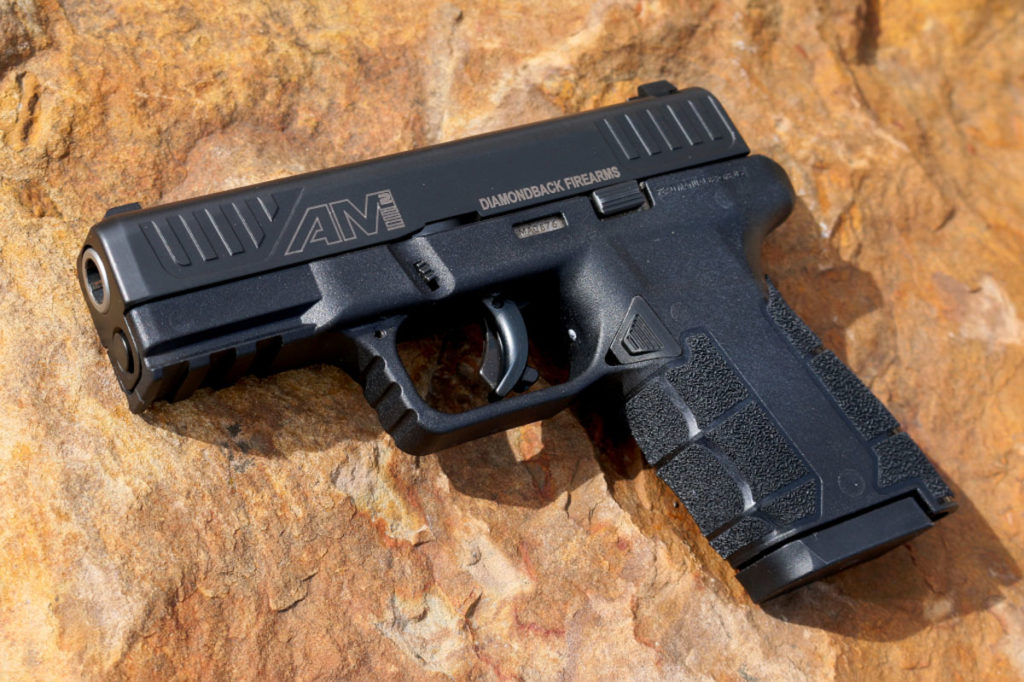 The Diamondback Firearms AM2 has an MSRP of $339.99. Current street prices are under $300 and may continue to decline as supply catches up with demand for this new model.

Florida based Diamondback Firearms started producing firearms in 2010 and has continued to grow their catalog over the last 8 years. Diamondback recently added the AM2 Compact 9mm handgun to their ever-expanding line of AR platform rifles and micro 380 Auto/9mm handguns. This latest model includes design elements inspired by the latest industry trends but combines them into something unique to Diamondback. Initial AM2 shipments have started to hit dealer shelves at a price point well below the other US made models with similar features. 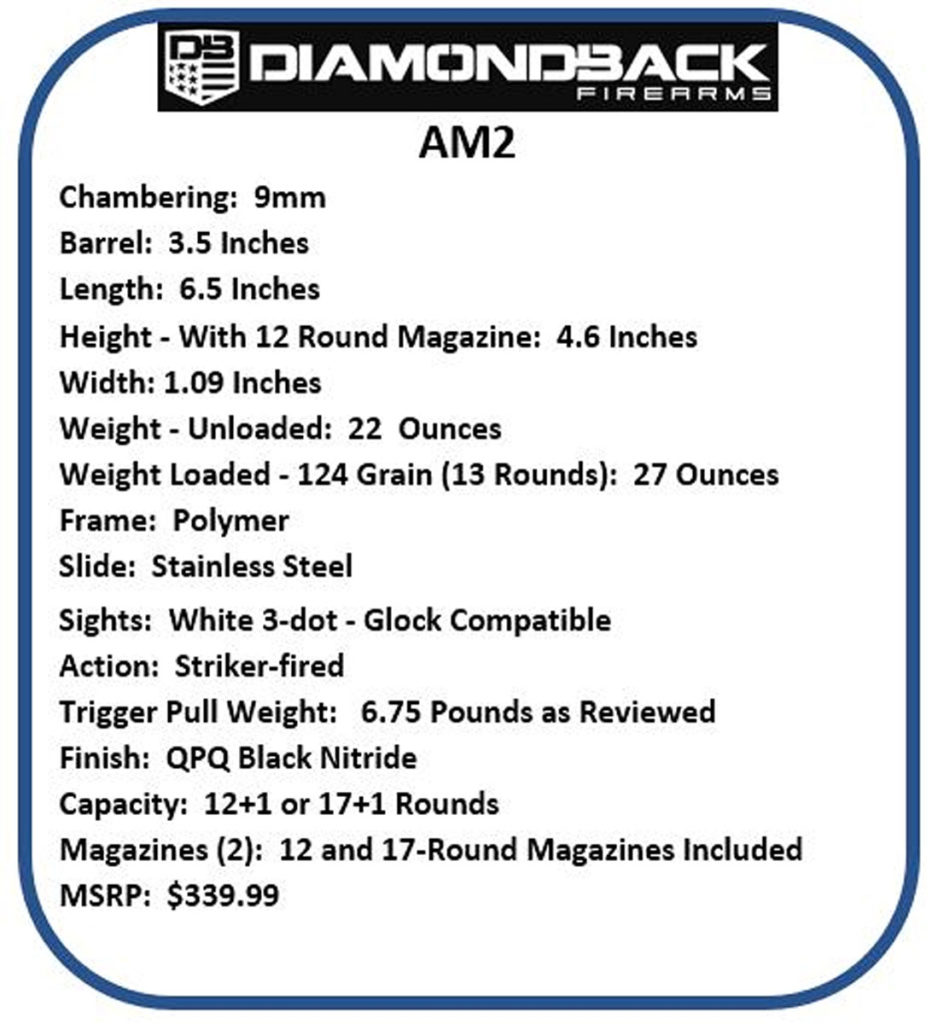 The Diamondback AM2 is a double-stack, striker-fired, polymer-framed, compact 9mm handgun with a 3.5-inch barrel. The AM2 ships with two magazines. The flush-fitting 12-round magazine for discrete concealed carry and the extended 17-round magazine with grip extension sleeve for those times when a full-size grip with added capacity is desired. The AM2 does not have the often polarizing features of a frame-mounted manual or magazine safety.

Overall fit and finish of the sample AM2 were very good. The matte black nitride finish on the stainless-steel slide and metal controls was smooth and even. The stainless-steel barrel has a bead blasted finish and includes a small viewing port over the chamber for fast visual chamber status checking. The slide features large pads of serrations on both the front and rear. Metal 3 dot sights top the slide.  The rear sight is drift adjustable for windage. Diamondback has machined the slide so aftermarket sights, for similar-sized Glock handguns, can be used on the AM2. 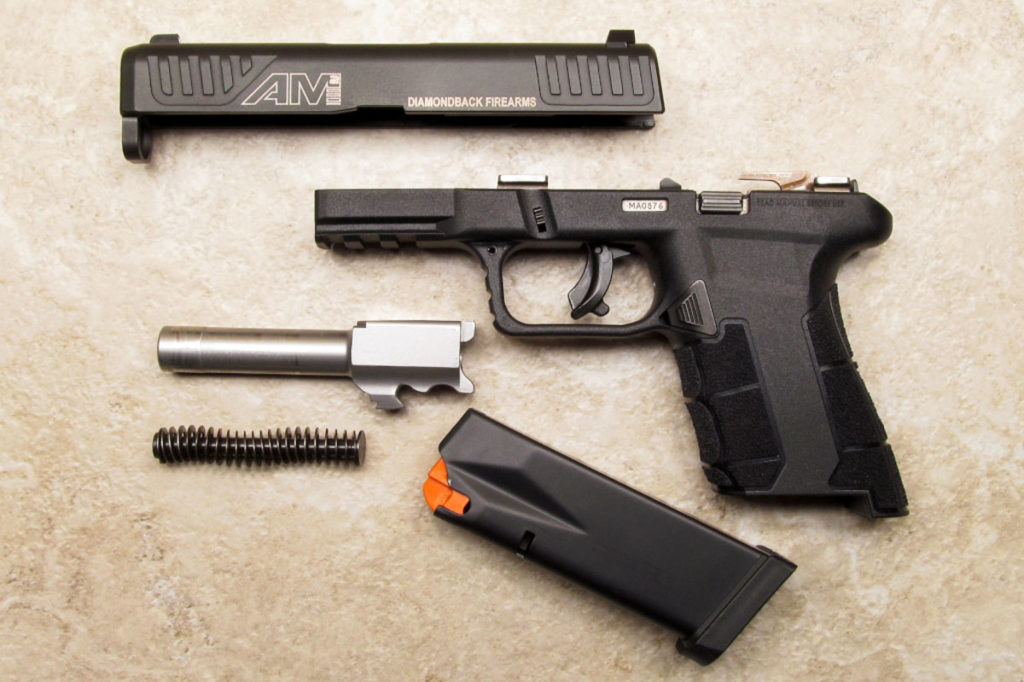 The polymer grip has an aggressive texture and very subtle finger grooves in the front strap. An undercut trigger guard allows for a higher grip on the pistol and the front of the trigger guard has been deeply grooved for those that like to hook their off-hand index finger over the trigger guard while shooting. The grip allows the low-profile magazine release to be reversed for left-handed shooters. The slide stop is not reversible and can only be operated from the left side of the pistol. A generous section of picatinny pattern rail, ahead of the trigger guard, allows for attachment of an accessory light or laser. 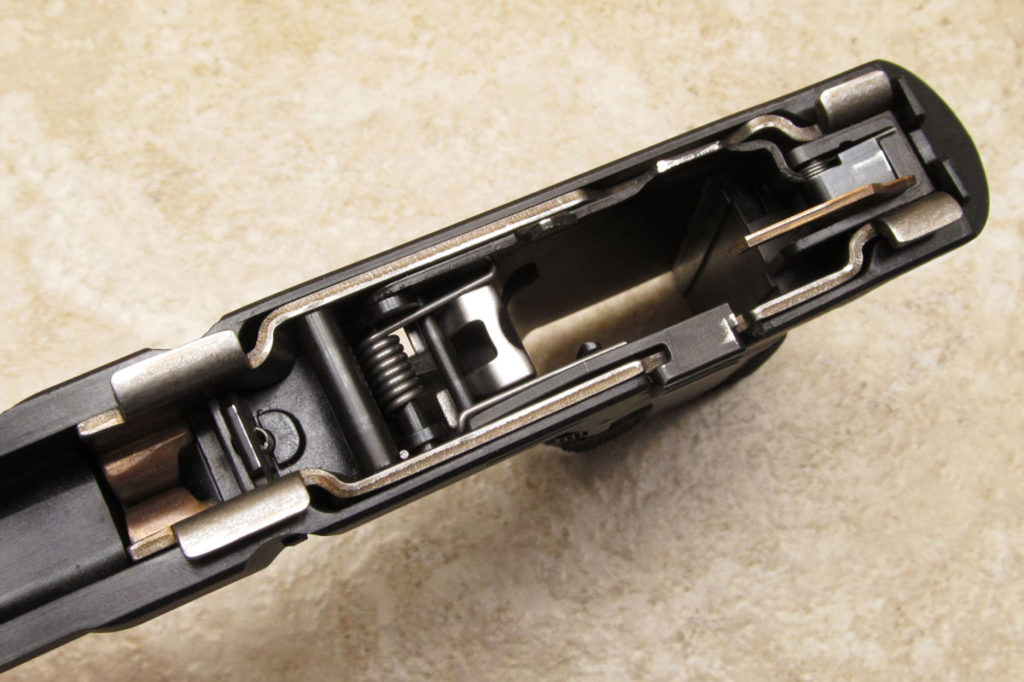 The AM2 fire control assembly (the serial numbered part) can be removed from the polymer grip and reinstalled in another grip. The grip has a viewing port cut out above the trigger allowing visibility of the serial number. Diamondback will be offering grips in various colors and configurations in the future.

The trigger pull on the AM2 is interesting. It has a half inch of pull length with much of the pull being low weight take up. The pull weight increases in the final eighth of an inch as the striker is released. The ears on the rear of the trigger limit the rearward trigger travel after the striker is released. After cycling, the trigger resets after a quarter inch of forward travel. The sample AM2 had a trigger pull weight just under 7 pounds.  That was a bit heavier than specification. 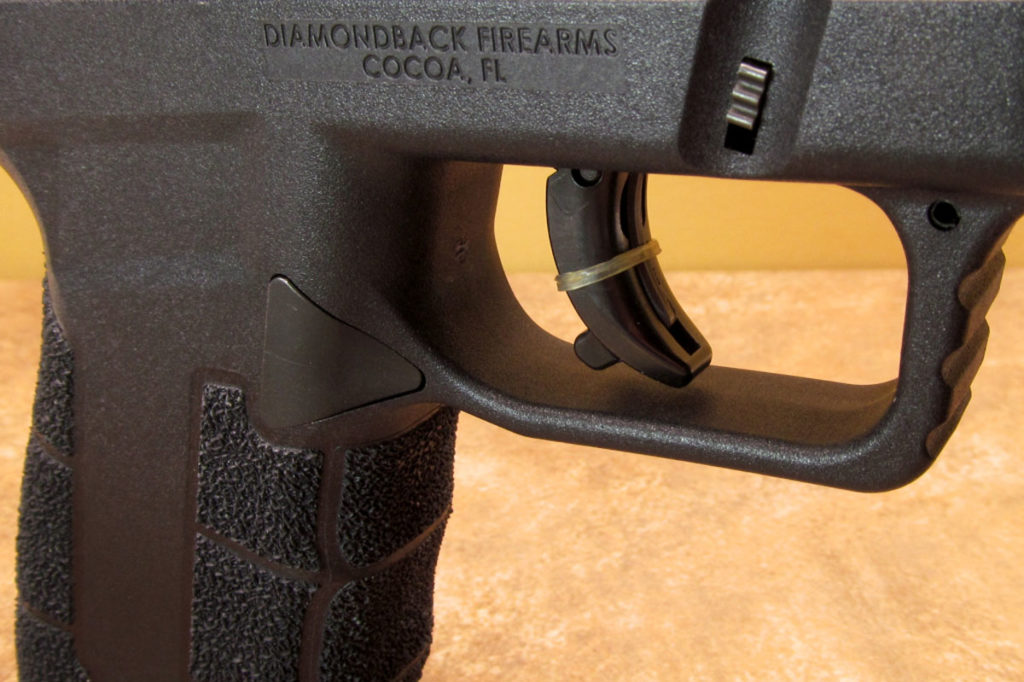 The author really liked the aggressive grip texturing. He didn’t like the void in the trigger face present when the trigger safely blade was fully depressed. It has a sharp edge at the bottom and detracts from shooting comfort.

Field stripping the AM2 was very easy and similar to the process used with other striker-fired handguns. After pulling the trigger to release the striker, retract the slide a small amount while pulling down on the assembly catch located above the trigger. Release the slide and push forward off the frame. Remove the recoil spring assembly from the slide to allow barrel removal. Reassemble in reverse order. 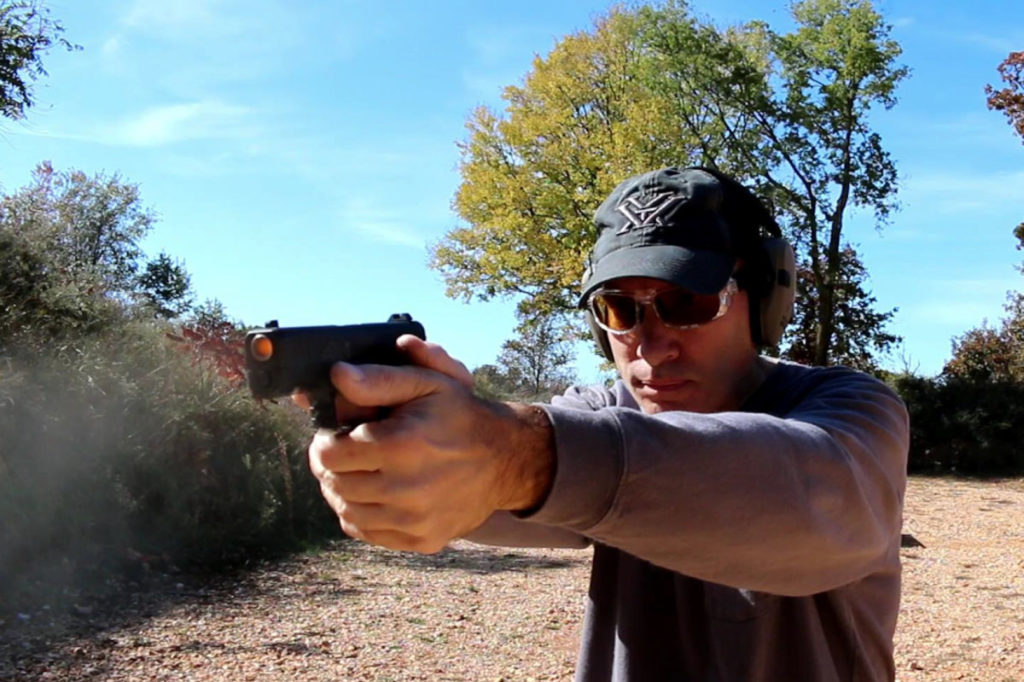 The AM2 is a true compact model with a 3.5-inch barrel and plenty of grip space for a two-hand hold.

Diamondback uses some very stout springs in their AM2 magazines.  You will notice this on your first trip to the range. The 12-round magazine loads to capacity and locks into the handgun with some extra effort. The extended 17-round magazine will try your patience a bit more. It can be loaded to full capacity, without utilizing a magazine loader accessory, but it’s a slow and difficult process. Locking the extended magazine into the AM2 magazine well also requires extra vigor when seating the magazine. A sharp rap on the magazine baseplate will assure it’s fully seated and locked in place.

The recoil spring assembly is also very strong in the AM2. It’s not so strong that it hinders the manual operation of the slide, but I did have several brass cases eject in a trajectory that had them landing on my hat. I also noticed the slide wasn’t locking back consistently after emptying a magazine. Both of these conditions disappeared after running 150 rounds through the AM2. Diamondback doesn’t specify a required number of break-in rounds for the AM2, but I’m confident these early teething issues were resolved through the use of the handgun.

The AM2, with the flush-fitting magazine installed, had room for all my fingers on the grip. The previously mentioned grip texturing added greatly to my shooting enjoyment. I hadn’t really noticed it previously, but the AM2 grip is a little slimmer than other compact double-stack 9mm pistols I’ve previously shot. Checking the stats versus other compact 9mm handguns lead to the discovery that the AM2 is about a tenth of an inch slimmer in grip width than the others. This might be a selling point for those with smaller hands.

Running some shooting drills at 7 and 10 yards, I found the AM2 sights were well regulated for elevation. Just line up the three dots over the area you would like your bullet to strike. I did notice my shots were consistently left of where I thought they should be landing. Upon closer inspection of the front sight, I discovered it was twisted a bit to the right. Lacking the proper size Torx bit to loosen and straighten the sight, I called it a day and decided to make the sight correction at home. 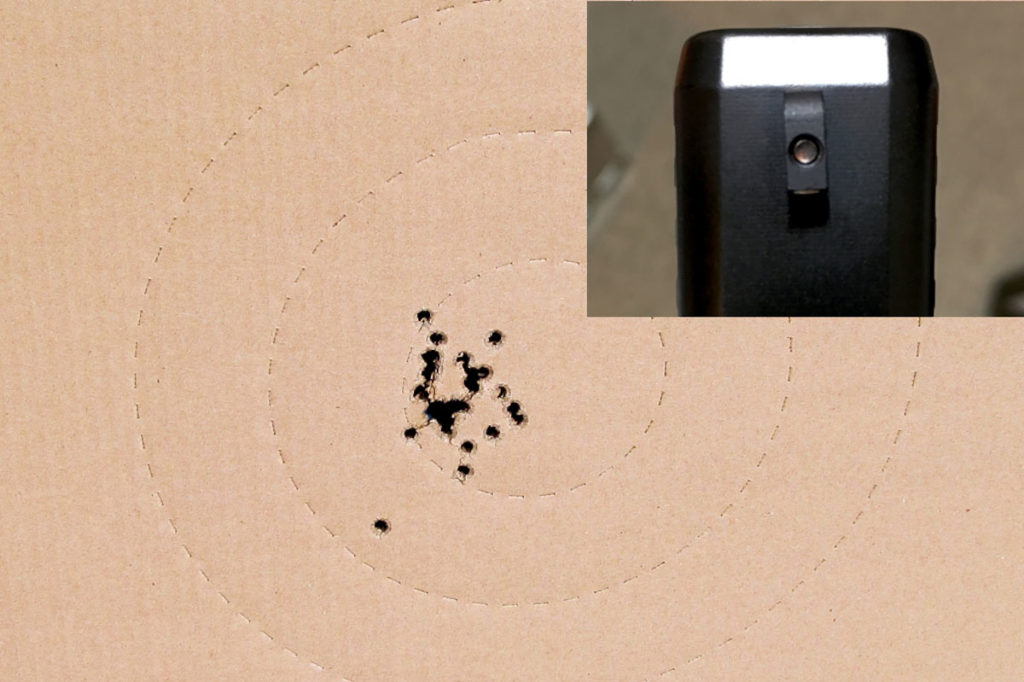 On the first range outing groups were pleasing small, but consistently printed left of point of aim. The rear sight needed to be adjusted to compensate for an improperly installed front sight (inset). This remedied the problem for the remainder of the review and was an easier fix than straightening the front sight.

On the second trip to the range, I took along a large variety of standard and +P pressure ammunition. All loads were tested for velocity and function. Some were also tested for off-hand accuracy at 7 and 10 yards. The AM2 was easy to shoot with good accuracy. I did have some intermittent stuck on feed ramp issues with the largest hollow point projectiles. The Sig Sauer V-Crown bullet profile does not appear to be compatible with the AM2 feed ramp.  All other loads fed, fired, and extracted without incident. 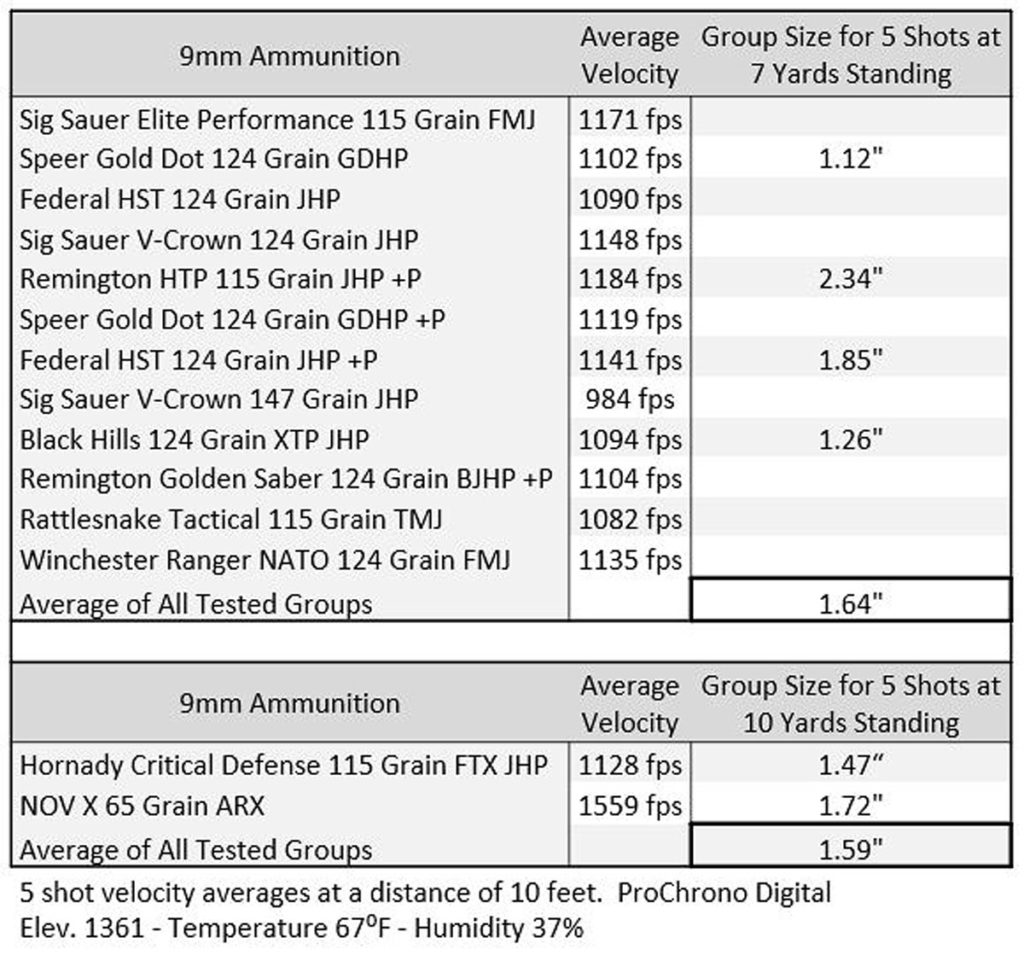 The author tried a wide variety of ammunition in the AM2. Standard and +P ammunition are both approved for use in this Diamondback model.

The remainder of my testing with the AM2 was done on steel targets at distances between 10 and 25 yards. Shooting was done with two hands, strong hand only, and weak hand only. The AM2 ran very well through this part of the evaluation. I finally called it quits at approximately 400 rounds through the pistol. All of the detail pictures supporting this review were taken after the range sessions and you may notice very little wear on the AM2. It appears to be well made and quite durable. If you do have a problem, the AM2 is covered by a limited lifetime warranty.  Diamondback will repair or replace any faults in materials or workmanship during the lifetime of the firearm for the original purchaser. 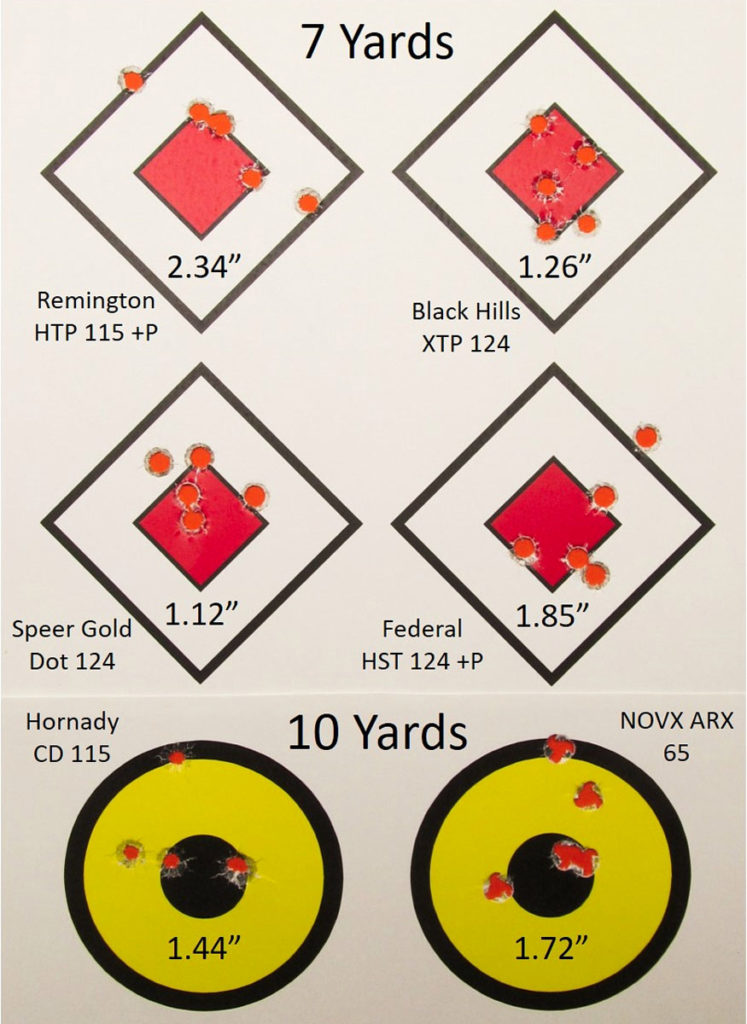 Off-hand accuracy was satisfactory. At 7 and 10 yards the combined average of all groups was less than 2 inches.

The Diamondback AM2 has many popular features and also appealing good looks. The slimmer grip and aggressive grip texturing were specific things I really liked about the AM2 versus other compact 9mm handguns I have tried. Though I had some early break-in issues with the pistol, I would still recommend the AM2 to those looking for a handgun they could comfortably carry during the day and also use on the nightstand with the extended magazine at night. Diamondback has set a very attractive retail price on this model and backed it with a lifetime warranty. It is definitely worth a look if you should find yourself in need, or want, of a compact 9mm. 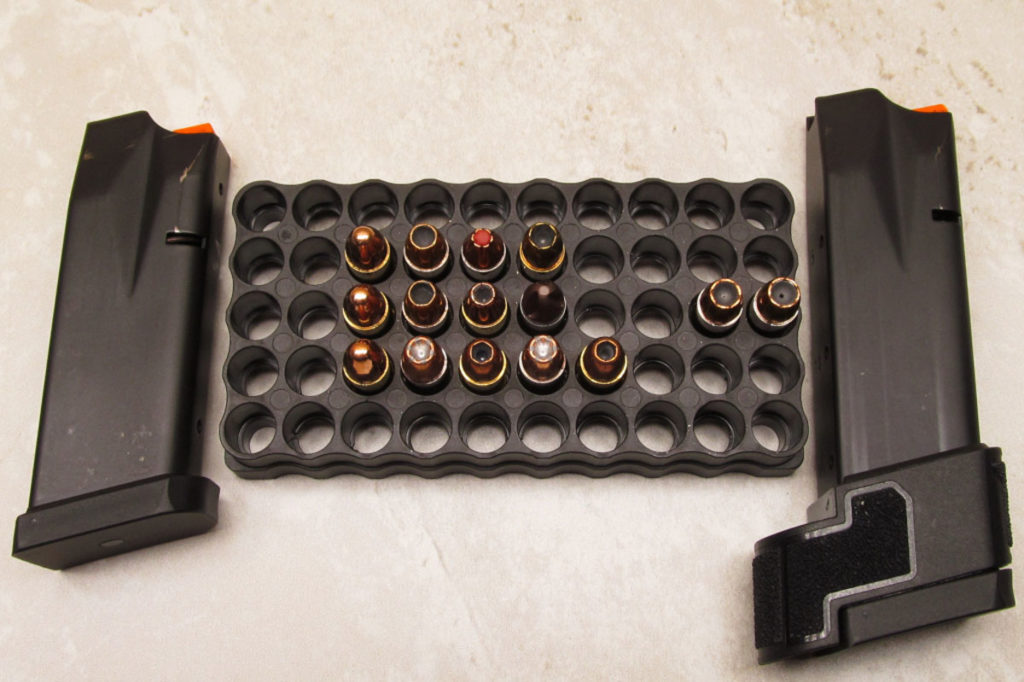 – Double-stack magazines are 12-round flush fitting and 17-round extended capacity. While difficult to load to full capacity, they worked well with everything except the largest hollow points shown on the right side of the ammo tray. 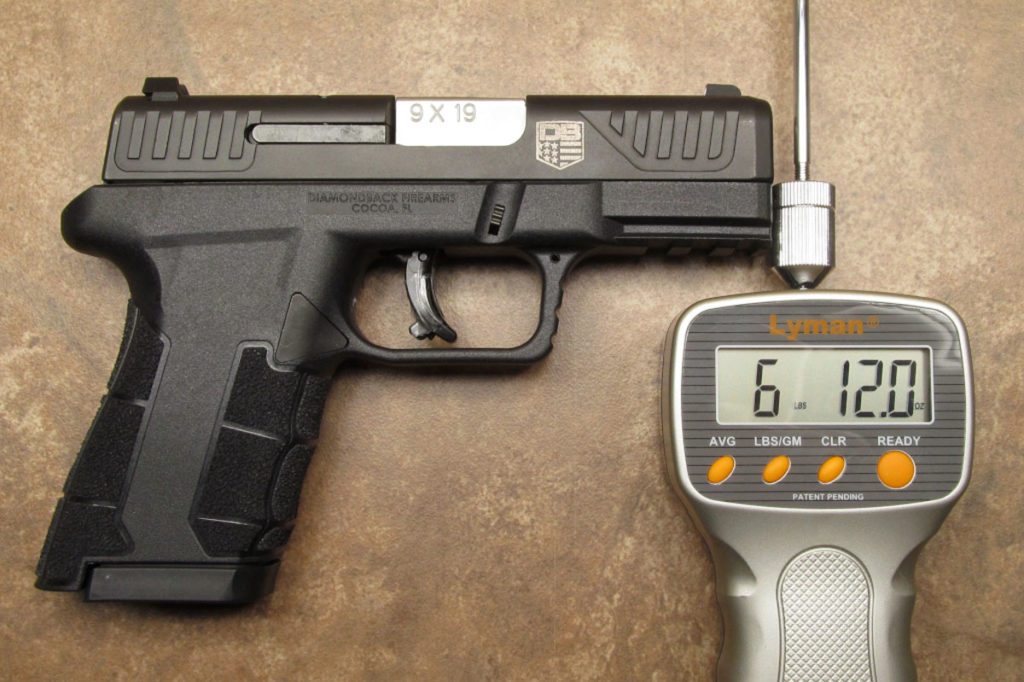 The trigger pull weight on the review sample exceeded the 5 to 6-pound specification listed by Diamondback in their marketing literature. It was still easy enough to shoot well and may improve with extended use. 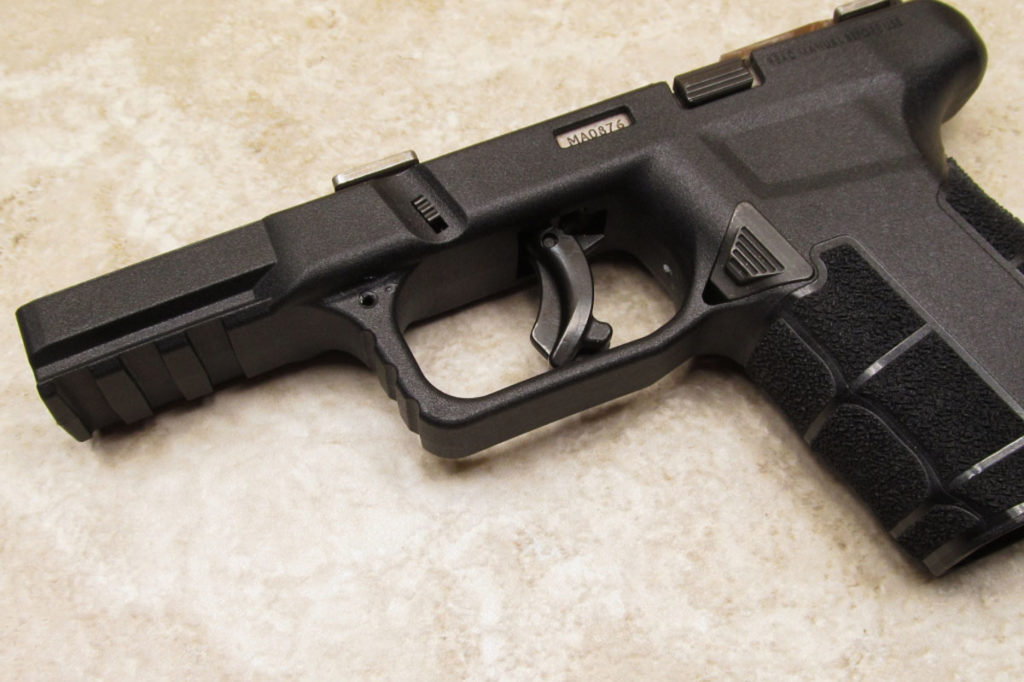 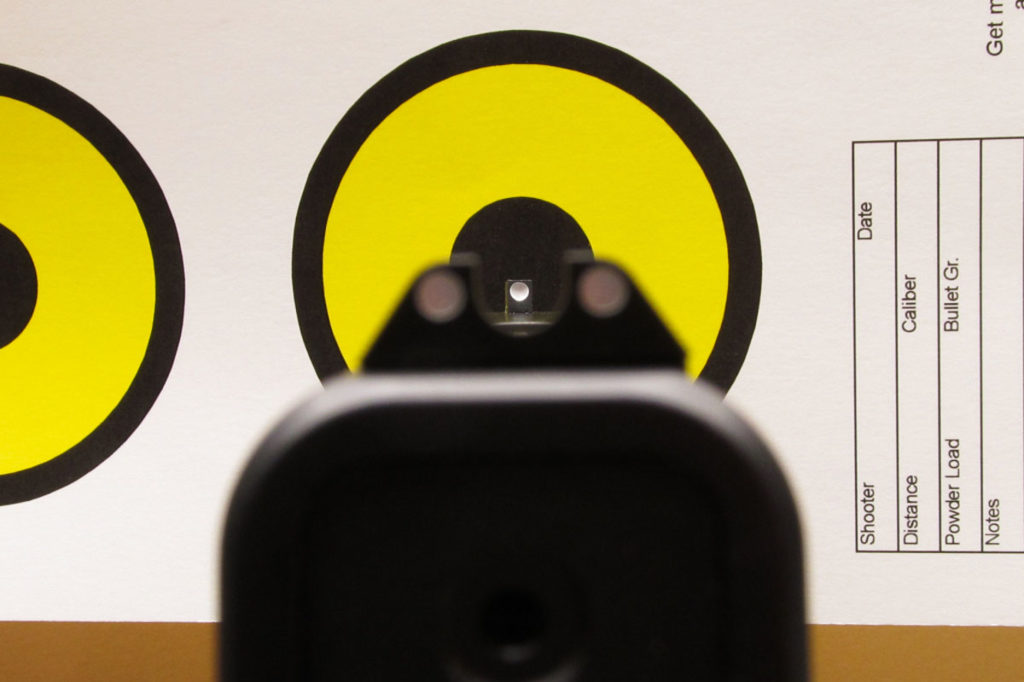 White 3-dot sights feature a U-notch rear sight that is adjustable for windage. Glock pattern sights will fit the AM2 if your personal sight preference runs to night sights or something fiber optic. 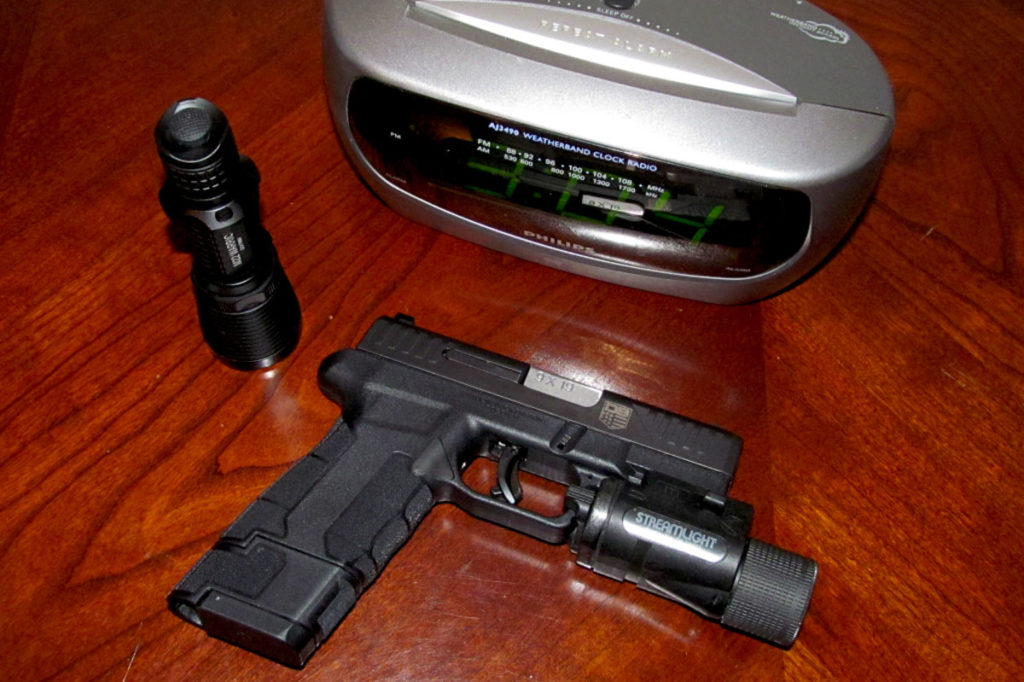 At night you can insert the 17-round extended magazine and add a quick-detach tactical illuminator to turn the AM2 into a nightstand firearm. 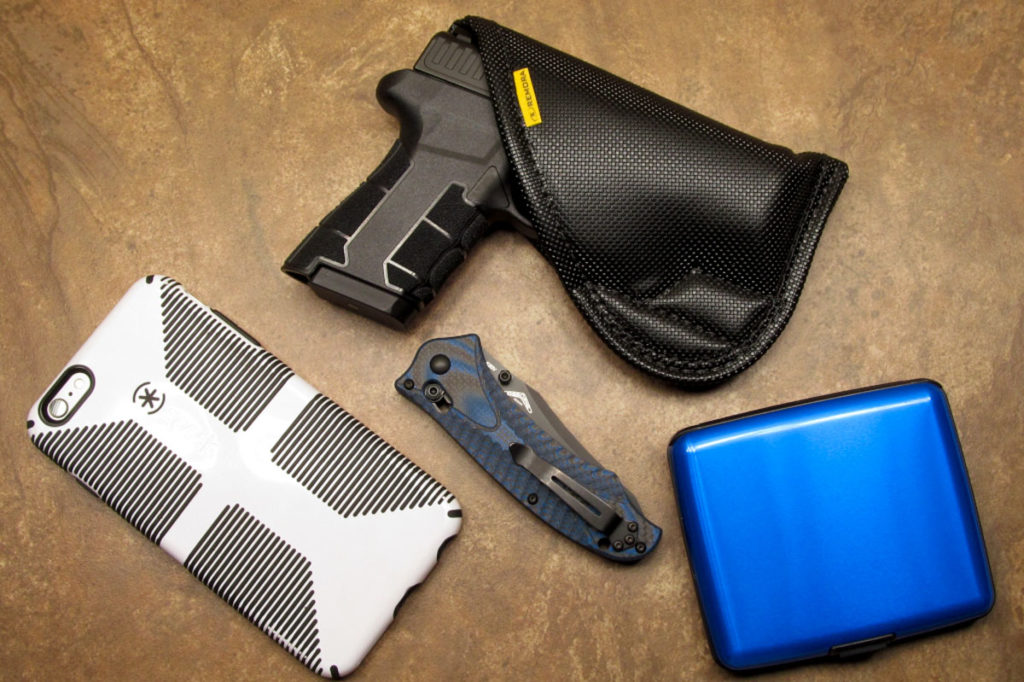 With the flush-fitting magazine, the 12+1 capacity AM2 rides easily in this Remora IWB holster. Diamondback lists six additional AM2 holster makers on their website offering leather, Kydex, and hybrid holster options.