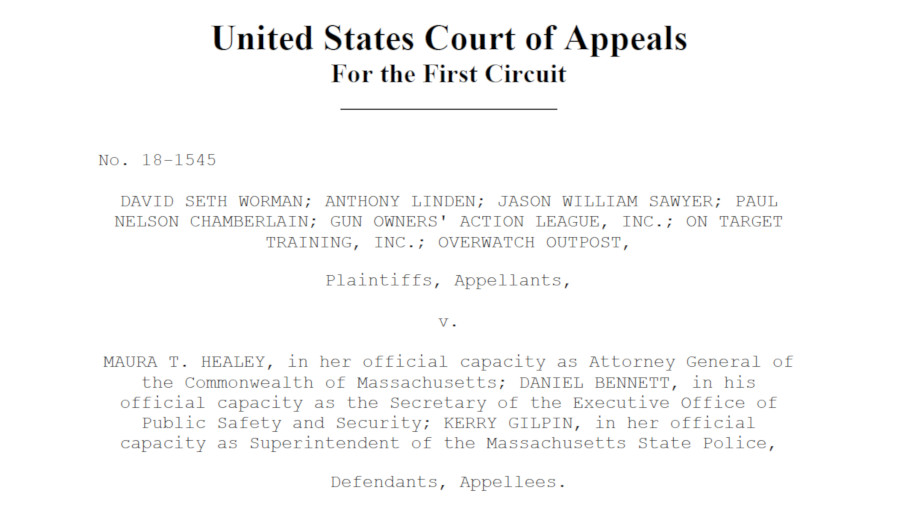 The First Circuit Court of Appeals sided with state Attorney General Maura Healey and upheld the Massachusetts “assault weapon” ban. Healey expanded the ban in 2016 to include firearms previously unaffected by state law.

“In a defeat for the gun lobby and a victory for families everywhere, the First Circuit has upheld the Massachusetts assault weapons ban,” said Healey on Twitter. “Once again, the courts have agreed that the people of our state have the right to protect themselves by banning these deadly weapons.”

“This case concerns an issue of paramount importance. In the wake of increasingly frequent acts of mass violence committed with semiautomatic assault weapons and [large-capacity magazines], the interests of state and local governments in regulating the possession and use of such weapons are entitled to great weight,” reads the ruling. “Even so, we recognize that such interests must be balanced against the time-honored right of individuals to bear arms in self-defense — a right that is protected in varying degrees by the Second Amendment.”

Great news for Massachusetts families & terrible news for the @NRA! I’m deeply grateful for @MassAGO Maura Healey’s courageous work to stand up to the gun lobby & keep weapons of war off our streets. MA is a leader in gun safety & the federal govt should follow its example. https://t.co/q52MfX8jZi

The appeals court argued that the ban was not so far-reaching that it damaged the core of the Second Amendment and that intermediate scrutiny was sufficient. Because gun owners still have the right to defend themselves with guns that don’t count as “assault weapons,” the ban is constitutional.

See Also: Massachusetts Lawmaker: ‘It is a privilege to have a gun license’

“In this instance, that decision rests on a web of compelling governmental interests, and the fit between those interests and the restrictions imposed by the Act is both close and reasonable,” the court concluded.

Healey expanded the state’s 1998 law amid controversy, saying “With this directive, we will ensure we get the full protection intended when lawmakers enacted our assault weapons ban, not the watered-down version of those protections offered by gun manufacturers.”

Gun rights proponents argued that the expanded “assault weapon” ban could be used to target gun owners who bought their “copycat” guns prior to 2016, and that semi-automatic firearms were not military-style since they are not capable of fully-automatic fire.

Healey directed prosecutors not to apply the law to gun owners who could prove they purchased their guns prior to the 2016 expansion, although it is a directive, unwritten into the law.

Next post: Trump Backs Out of UN Arms Trade Treaty: ‘We are taking our signature back’