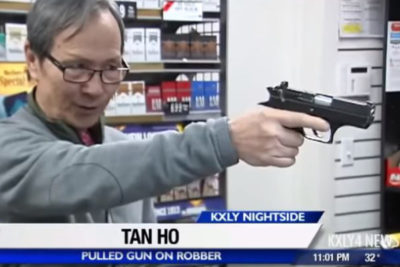 Tan Ho demonstrates how he chased away a would-be robber earlier this week. (Photo: Screenshot KXLY)

Washington mini-mart owner Tan Ho has been robbed before, so when a man entered his business last Tuesday demanding money, he didn’t hesitate to take action.

“He said, ‘Give me money!’, and then I knew exactly what to do,” Ho told KLXY. The store owner was behind the cash register, where he keeps what appears to be an IWI Jericho 941 and a machete.

The suspect knew he’d gotten more than he bargained for, and he left the store in a matter of seconds. Police are still looking for the man, who they believe is around 5’5″ and was last seen wearing a black hoodie and white pants. Ho said his face was covered, and he couldn’t identify his race.

SEE ALSO: Why Aren’t You Carrying? Here Are the Four Most Common Excuses

Ho keeps his handgun in a leather thumb-snap holster attached to the counter. The report doesn’t mention whether he keeps a round in the chamber, but in the surveillance footage, he appears to be trying to rack the slide.

The mini-mart owner told KLXY this isn’t the first time he’s had to scare away a would-be robber. Last year a similar situation occurred with a similar result: the man ran without any money.

Ho has good reason to take every precaution to protect his business. A recent FBI study found that Spokane is the third most dangerous city in the United States in terms of property crime.

Armed self-defense got more difficult for Washington gun owners earlier this month, however, with the passage of I-1639. The measure bans the sale of semiautomatic rifles to adults under the age of 21, creates a registry of gun owners,  and allows the state to charge a $25 fee on the sale of “assault rifles.”

The law will also make it more difficult for people like Tan Ho to protect themselves and their businesses. It establishes a 10-day waiting period for certain purchases and holds gun owners liable for failing to secure firearms.

This last requirement could prohibit the mini-mart owner from keeping his handgun in such an accessible location.

Previous post: Why Aren’t You Carrying? Here Are the Four Most Common Excuses