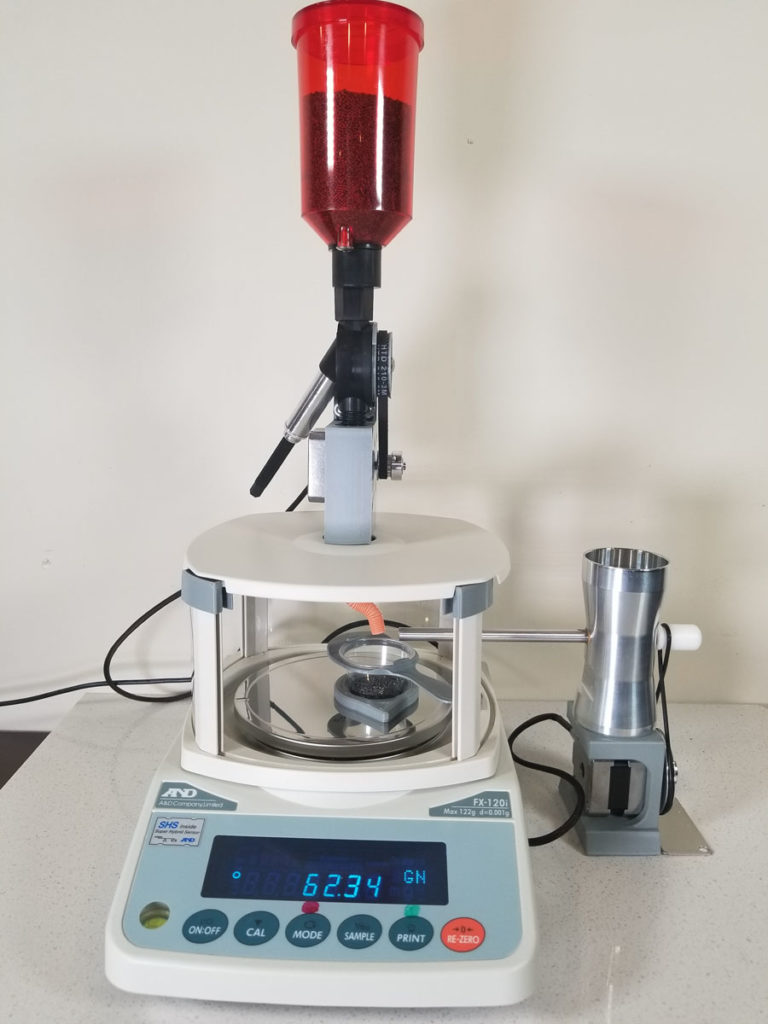 The AutoThrow and AutoTrickler installed on the A&D FX-120i scale.

This review is intended to give you an overview of what the AutoTrickler V2 & AutoThrow Powder Measure/Dispenser is, what it does, my experience with it, and why it’s quickly becoming the most popular powder measuring/throwing device in the precision shooting world. This review is not a debate on whether what you have is good enough, on how to set this product up or use it, or to answer every question you might have.  The manufacturer has a great website, clear instructions, and is very responsive to emails.

The AutoThrow, in a nutshell, is a Lee Powder Measure that has been heavily modified and connected to an electrical motor. The unit (AutoThrow) is placed on the top of a laboratory grade scale and electronically connected to the scale so that the scale controls the motor that drops the powder charge. 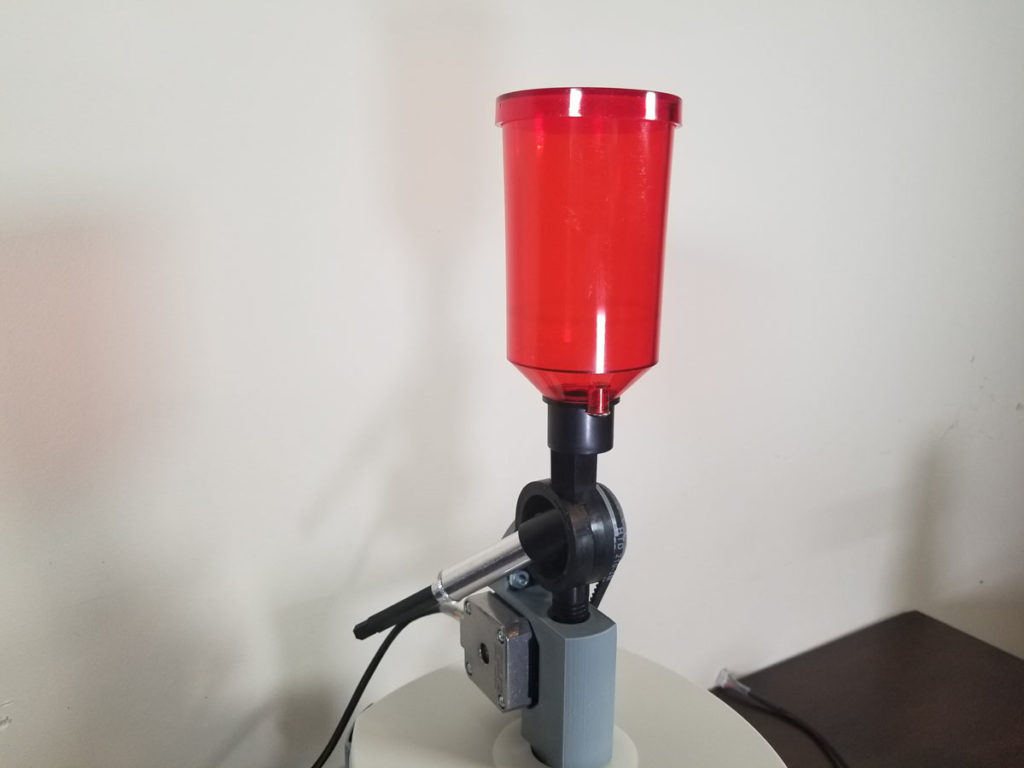 When you place the included powder cup/pan on the scale, the scale automatically checks for zero and then sends a signal to the AutoThrow motor which turns a belt and throws a user-defined preset amount of powder into a funnel that leads into a plastic straw that dumps the powder into the pan. 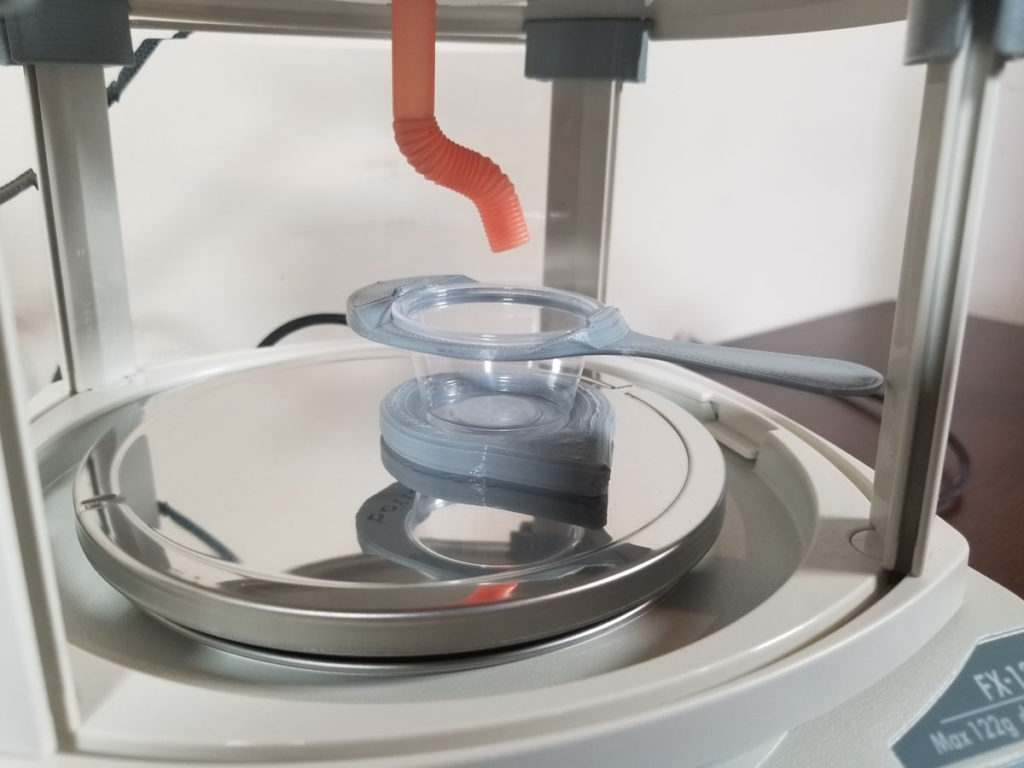 The bend in the straw slows down the trajectory of the powder. It works, as it never spilled a kernel of powder.

The Powder Measure in my testing was not very precise; however, it’s not intended to be. You set it so that it throws a few grains short of the desired charge weight and then the next part of the system, the AutoTrickler finishes the charge. If you were to buy the Autothrow by itself as an upgrade, it would cost you $199.00. 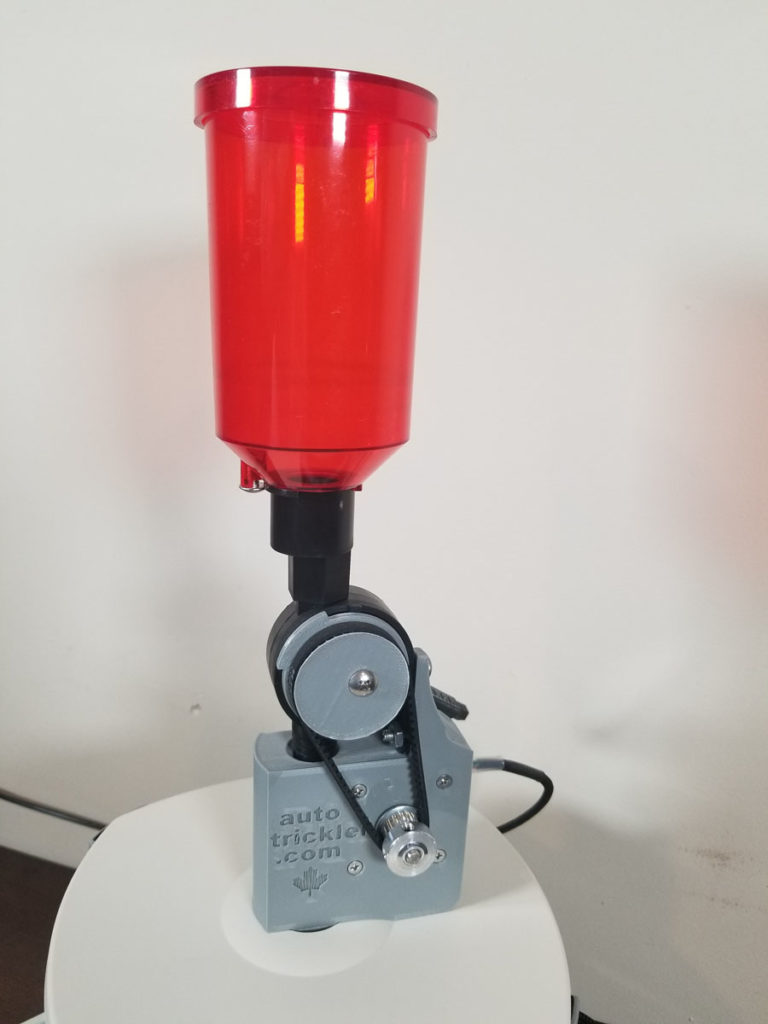 The belt and motor on the AutoThrow.

The second part of the equation is the AutoTrickler. The AutoTrickler V2 is a precision powder trickler with an electronic motor that is connected to the laboratory grade scale with a cable. You can use it without the AutoThrow and it’s still extremely fast and accurate. You could throw your own charge, place it on the scale and then the AutoTrickler would, without any user input, finish the charge. The real magic happens when you use all of this as a system. The AutoTrickler V2 costs $229.00. 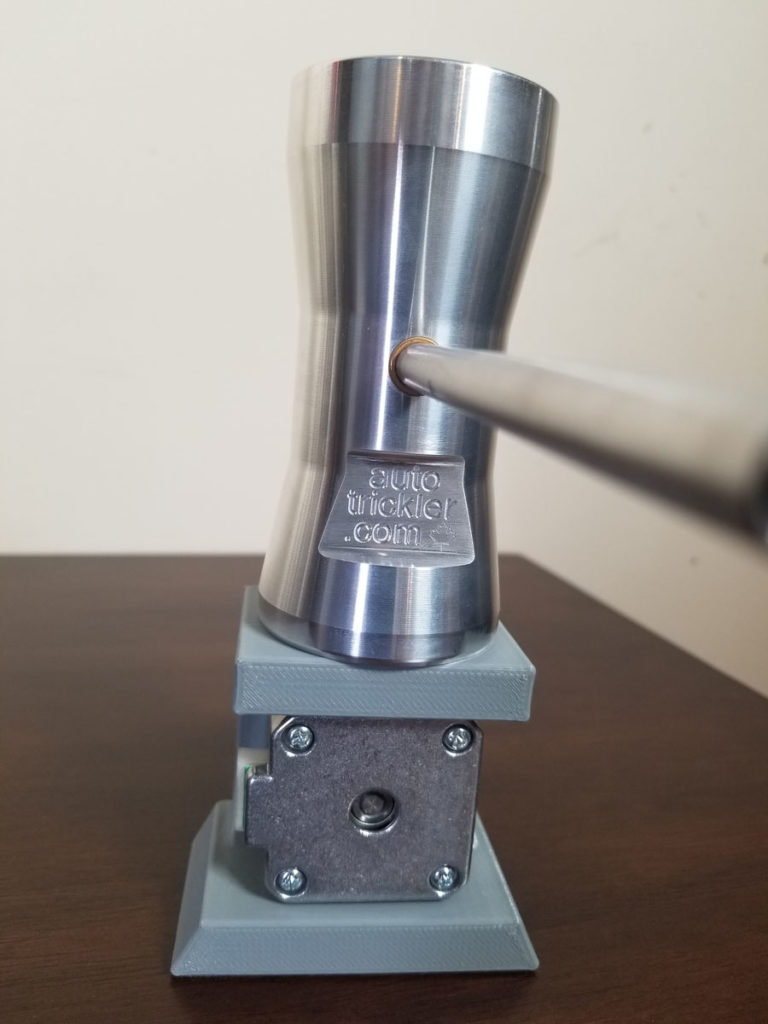 What does it do?

When the AutoTrickler V2 & AutoThrow are connected to a scale and are working together you can throw a powder charge (any grain weight up to around 100 grains) in about 10 seconds that is accurate to the kernel of powder without doing anything except placing the pan/cup on the scale. The system is capable of handling larger charges. For example, if you needed a charge of 200 grains, the thrower would throw two charges of 98 grains and the trickler would finish the last 4 grains of powder. 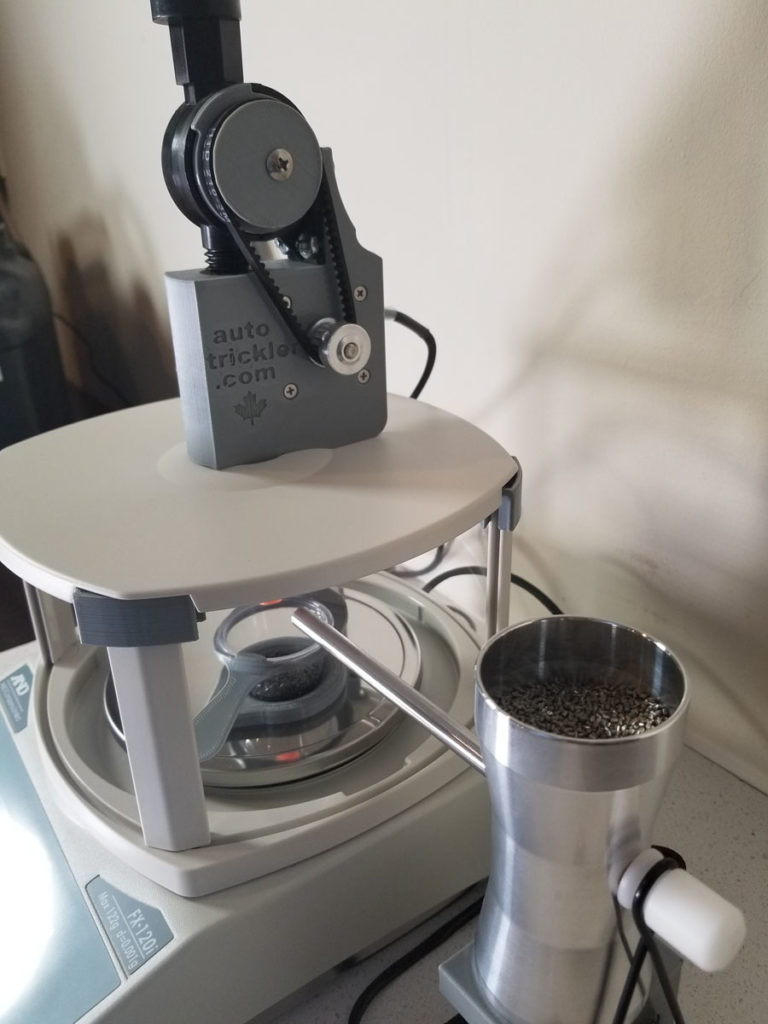 There are currently a number of options for scales that work with this system. I chose the A&D FX-120i, which is the less expensive option and is recommended. I bought mine when the manufacturer had a rebate and it cost me about $80.00 less than it’s normal price of $500.00 U.S. from Cambridge Environmental Products (Keep in mind the price of $635 is Canadian and you can buy it for $500.00 U.S. Dollars). 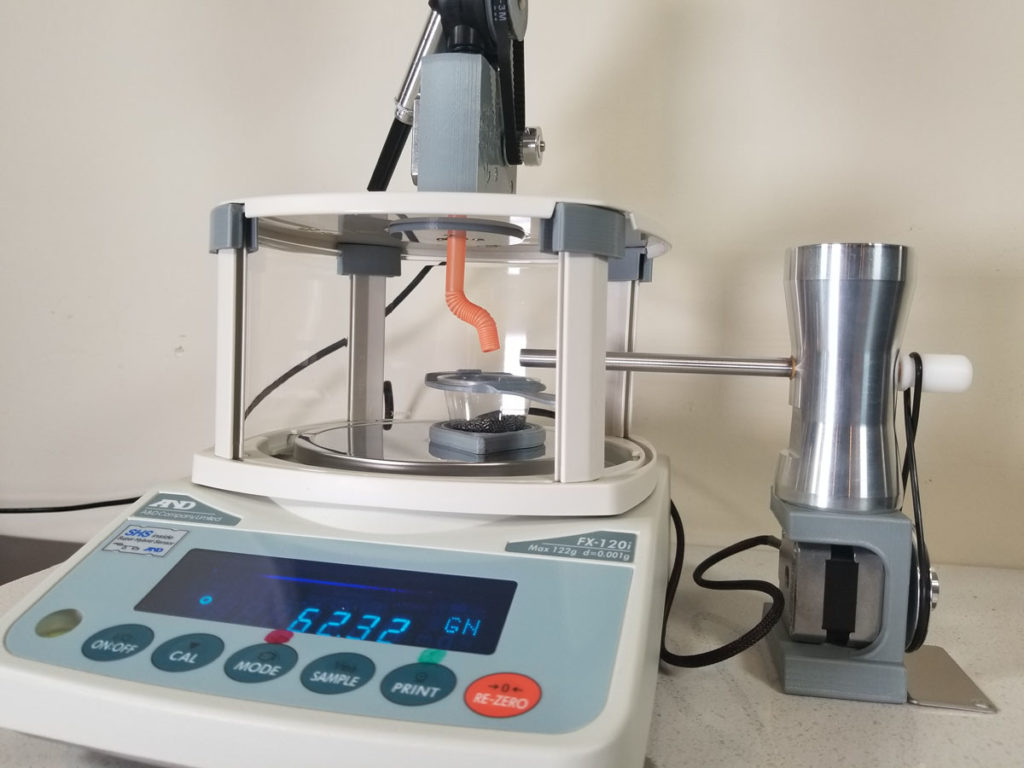 The set up has plexiglass on two sides to prevent drafts that cause the scale to drift. I’ve had no issues with drift or maintaining zero.

The A&D FX-120i  is considered the best value laboratory scale on the market. It has a faster than one-second response time and is accurate to the kernel of powder. The scale can resolve to 1 milligram. As an example, a kernel of Varget weighs about 1.5 milligrams. When you operate the scale in grains, because of the conversion, it’s slightly less precise. It resolves in .02 grains (that’s two one-hundredths of a grain or 2/100) which is 1.3 milligrams. However, that’s still less than the weight of a kernel of Varget. The trickler can’t get more precise than what this scale can measure.

Most reloading scales are only accurate to 0.1 of a grain or 1/10th and they suffer from drifting, temperature changes, power issues, and can sometimes even be affected by lighting.

The video above shows the FX-120i resolving one kernel of Hodgden Retumbo in both milligrams and grains.

For practical purposes, in my opinion, this is accurate enough. If you disagree, the system also works with the Sartorius Entris 64-1S which is accurate to the 1/10 milligram but costs substantially more money and it won’t make your charges any more accurate because the system {trickler) can only resolve up to a kernel of powder.  It’s really an option for those that already have one and as counter-intuitive as it sounds the more expensive scale will ultimately gain you nothing. The inventor of the AutoTrickler V2 & AutoThrow has written an excellent article that you can read here on the very question of how much accuracy is needed in powder charges.

As I already stated, I bought the scale from Cambridge Environmental for $500 (minus a rebate) and the AutoTrickler & AutoThrow for the A&D from https://www.autotrickler.com/auto-trickler.html which as a package costs $399.00 for a total of $899.00

I was worried that the separate pieces were going to be difficult to put together and program. My worries were unfounded. The stuff comes well packaged, well labeled, and there are good directions with pictures that just about anyone should be able to figure out. You can also buy the complete package (including scale) pre-programmed from Cambridge Environmental for $899.00. 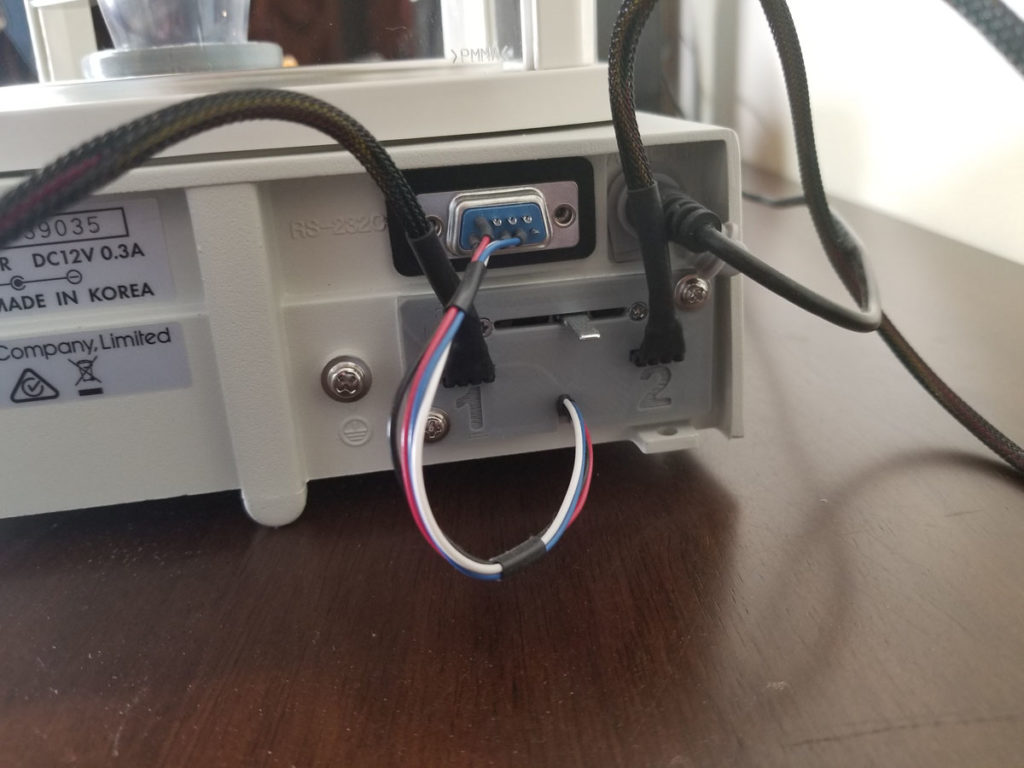 Putting the system together and programming it was relatively easy and was pretty much “plug and play.”

I had the whole thing put together and throwing powder in less than one hour. I also must report that I couldn’t wipe the grin off my face when it threw a perfectly accurate charge the first try in less than 10 seconds.

In the video above you can see the AutoTrickler/AutoThrow Combo throwing powder charges and working from several different angles. The powder is Hodgdon Retumbo and the charge target weight is 75.02 grains of powder. The scale resolves to +/- .02 of a grain so anything within .02 of 75.02 is within one (1) kernel each time. The speed is incredible when taking into consideration the accuracy that is being maintained at the same time.  The back of the scale has a slider for fine tuning between the speed and accuracy of the AutoTrickler.  In the videos shown the slider is dead center in the middle.

I reload a lot of precision long range and hunting ammo. For years, I’ve found it beneficial to long-range accuracy, standard deviations, and extreme spreads to use a dispenser and weigh every single charge. I used to throw a charge into a pan a few grains underweight and then hand trickle up to the desired charge weight. I started on a beam scale, eventually upgraded to an electronic scale, and then decided I could no longer afford the time and upgraded to two RCBS Chargemaster scales.

While the RCBS Chargemaster scales are more consistent in my opinion than just throwing charges from a powder thrower, they’re not even in the same league as this system when it comes to the accuracy of the scales. Most digital reloading scales on the market today are glorified kitchen scales repurposed for the reloading world.

When you run the two Chargemaster’s together, they are relatively fast. However, together they’re not as fast or as accurate as this system, which is why I have two RCBS Chargemasters for sale right now.

In the video above you can see the AutoTrickler/AutoThrow Combo outrun two stock RCBS Chargemasters. Even if you could get the two Chargemasters to keep up, they’re not as accurate and I’ve had problems with them throwing different charges, even after calibration  (they say they are the same charge but they’re off).

The only other powder dispenser/measure that I believe rivals this system is the Prometheus, which costs $3800, and you don’t really own it after you pay for it. Look it up.

The benefits of more accurate powder charges for long range shooting/reloading are not debatable. Someone on a budget could buy only the scale and a cheap $19 hand trickler and accomplish the same amount of accuracy. However, the amount of time it takes to load ammo goes up substantially. I’m crazy busy (who isn’t?) and any time I can cut hours out of the reloading process is more time I have for shooting and sleeping. Time is money and the extra $400 to automate the system is well worth it for me.

I’m not the only one that feels this way. Serious long-range shooters all over the world from F Class to PRS are upgrading to this system as we speak because of the time saved and the accuracy and consistency gained.

I spoke with Adam, the inventor, months ago when I first bought the setup. He’s a very knowledgeable and smart guy. He’s also a great long-range shooter and is currently the 2018 Canadian F-Class Nationals Champion.  I wanted to know about warranty and he assured me that he’s in this for the long haul and that he has taken care of any customers that had any sort of issues. That being said, don’t abuse your stuff.

He’s also continuing to innovate and eventually will have a Bluetooth upgrade for the entire system which will allow you to control the AutoThrow/AutoTrickler/Scale from your smartphone. 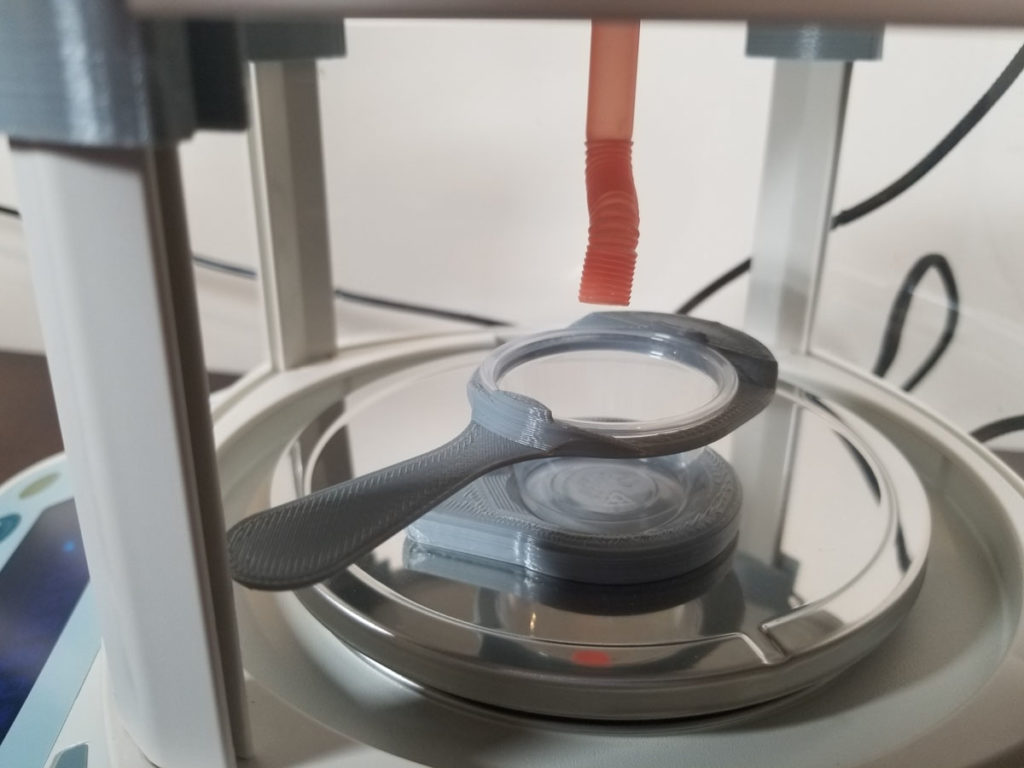 The handle for the powder cup/pan is 3D printed but it balances perfectly, the handle is long, and I think it’s the best pan I’ve ever used. Also, note the tray it sits in is stuck to the scale and requires you to place the pan in the exact same position each time.

Many of the custom parts are 3D plastic printed but I thought they were well-designed and high quality. The system does exactly what it’s advertised to do and after nearly six months of using it, I am completely satisfied and happy. I’d buy it again if it were stolen.

For more information or to buy the AutoTrickler V2 & AutoThrow visit AutoTrickler’s website by clicking HERE.

To buy the complete package including the scale visit Cambridge Environmental

Previous post: Getting Out of a Jam: Semi-Auto Handguns