Yogi Berra was famous for his funny-yet-wise Yogi-isms, and in honor of him, I offer this piece of advice: the first time you have to do something, shouldn’t be the first time you do it. When it comes to shooting off of a barricade you don’t want your first time to be at a match, trying to figure out the best way to get it done. You get good at shooting off of barricades with practice, and having your own to use is a great help. Barricades can be simple or complicated, large or small, and there are 1,001 ways that they can be configured. Since I don’t have a large garage or a pick-up truck I typically err on the side of smaller, more transportable options that I can easily set up by myself at the range or in my yard.

Why Even Build Barricades? 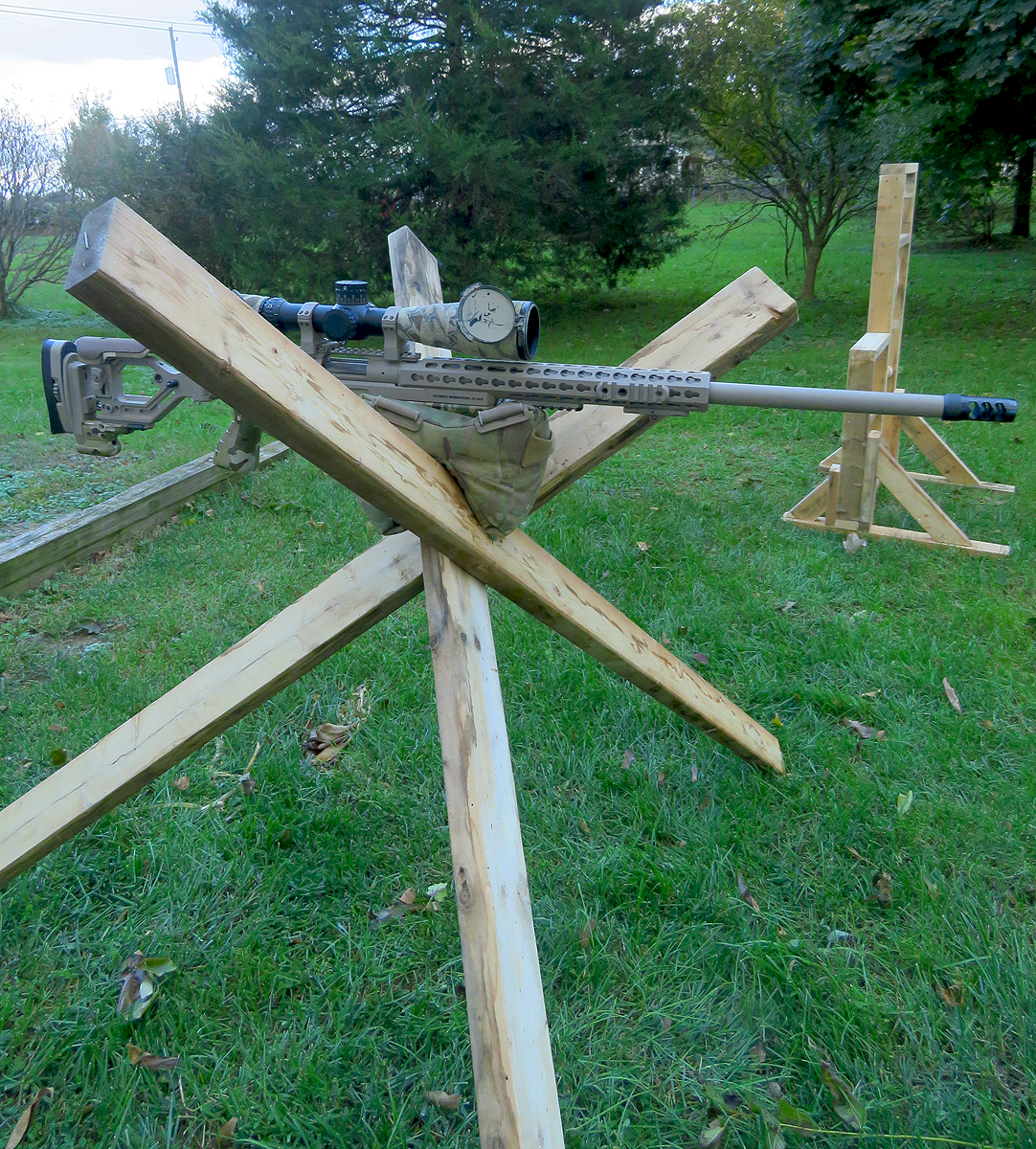 Less than $50 worth of materials went into making these two barricades and it could easily save a person double that after some practice in their own backyard.

Other than for the obvious reason, the small investment in a barricade can help you flesh out certain techniques and reevaluate some of the gear that you carry. It’s not uncommon to see some PRS shooters carrying multiple support bags to handle just about any positional shooting scenario they might encounter. That’s fine but with some barricade practice you could probably narrow the number of bags down to just one or two and still be stable enough to make a shot using good fundamentals.

If you’re going to build yourself a barricade, a step-type barricade is probably the simplest, most versatile kind you can put together. Sticking with the theme of compact and portable, said barricade will basically need to fit in a Toyota Camry or Jeep Wrangler one way or another. That being said, I figure the maximum dimensions that I can work with are going to be about 32″ wide by 50″ tall, not including the support bases.

The simplest barricade that I’ve made for practicing shooting positions with was constructed from 24”X48” sheets of plywood that are available at most hardware stores.  They are big enough to be useful and yet small enough to store just about anywhere and fit in any vehicle I might take to the range. 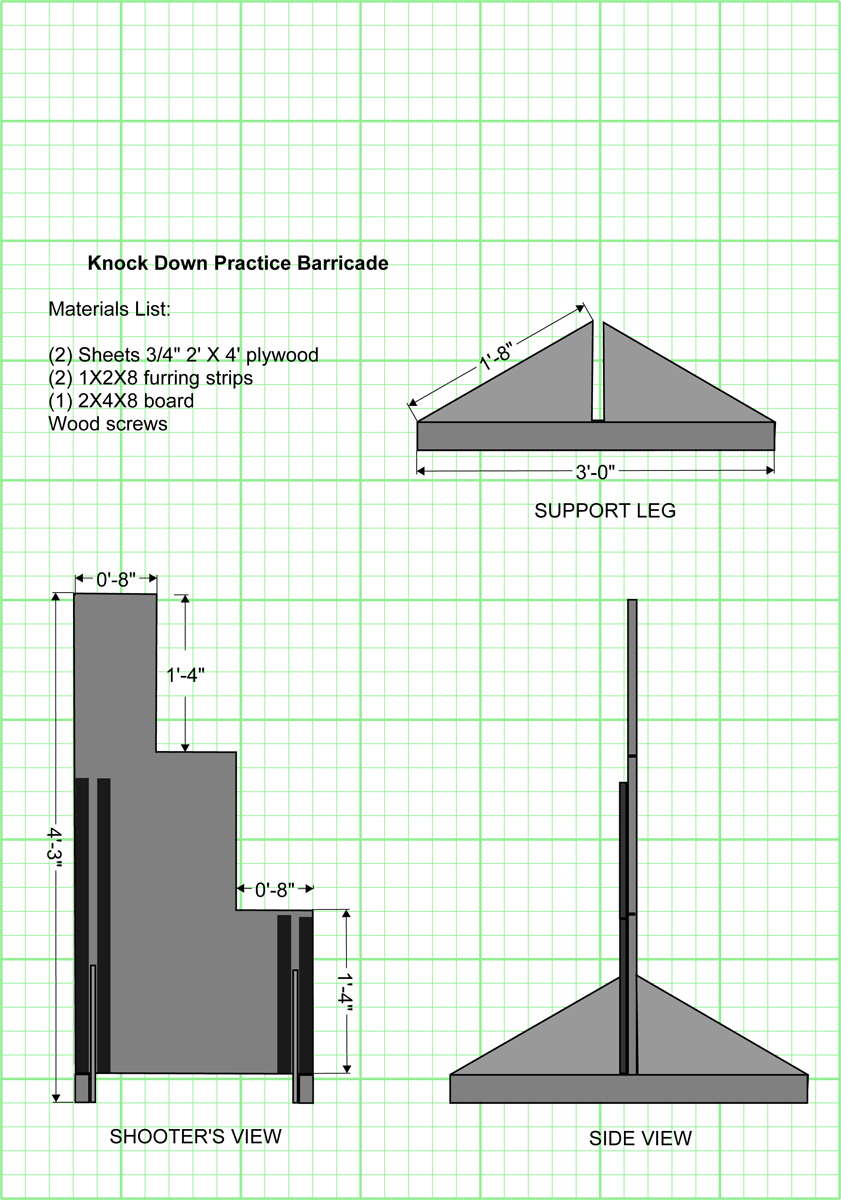 These are the plans for my plywood barricade, a quick run through the lumber department will net you everything you need.

You’ll need two sheets to complete this project, one sheet is going to be cut out into the steps for shooting off of (an 8″ step every 16″) and the other is going to get turned into the support legs. Furring strips are screwed to the barricade to act as a guide for the support legs and give the barricade some added rigidity. I used a single piece of 2X4 lumber to make two 3′-0″ long “feet” that I screwed to the plywood. Fastening the 2X4’s to the plywood acted as a stop for the barricade to rest on and gave it an additional 3 1/2″ of height. I made this barricade over a year ago and other than the bottom step getting eaten up it’s still going strong. The angled 2X4 was added later and since it attaches via a slip fit at the top it can be reversed to go the other direction too.

As good as that plywood barricade is, I also wanted one that was a little bigger, a little more stable, and more versatile with different features. I had access to some scrap 2X4’s so it seemed like the right thing to do to recycle them into a new barricade that I could haul around. 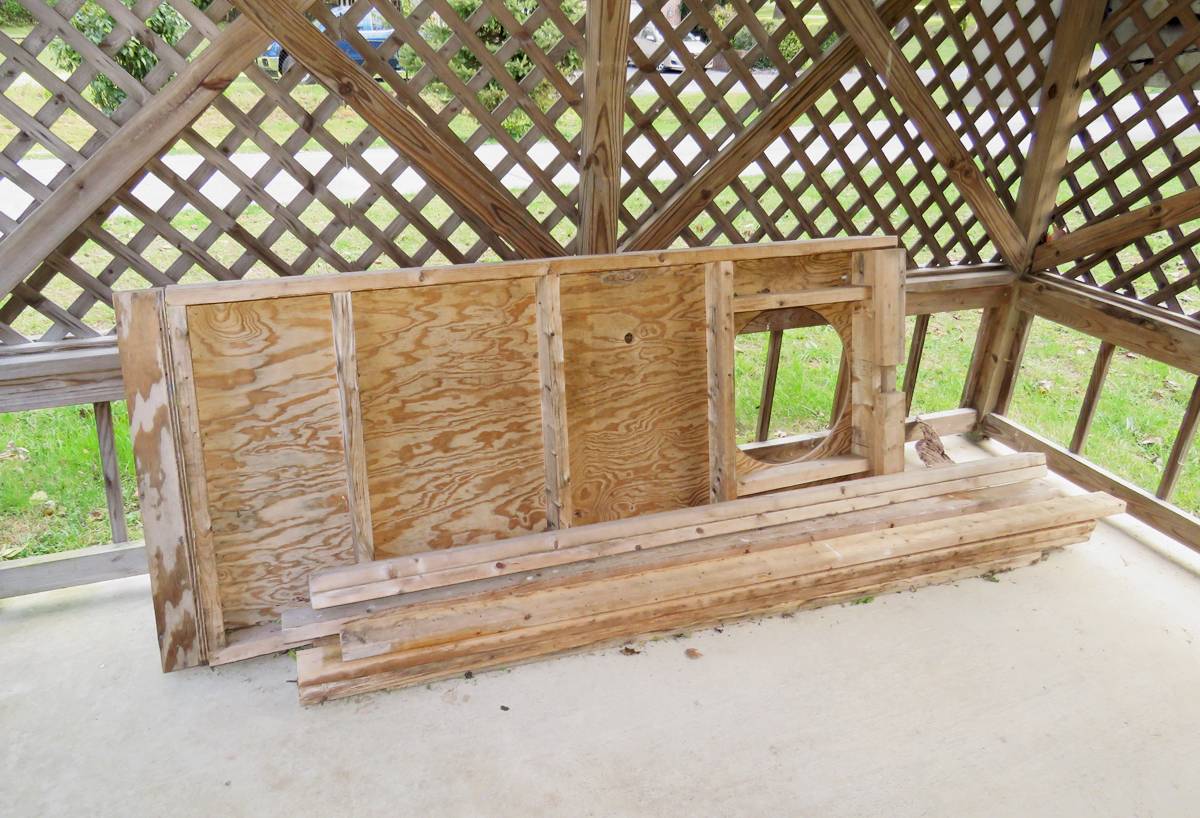 This was the pile of discarded lumber from a job site that would become my new practice barricades.

I based the dimensions of this barricade on the PRS Skills Stage 2 barricade that is familiar to many a competitor. That meant the standing height needed to be between 52-54″ and the kneeling height would be between 28-30″. 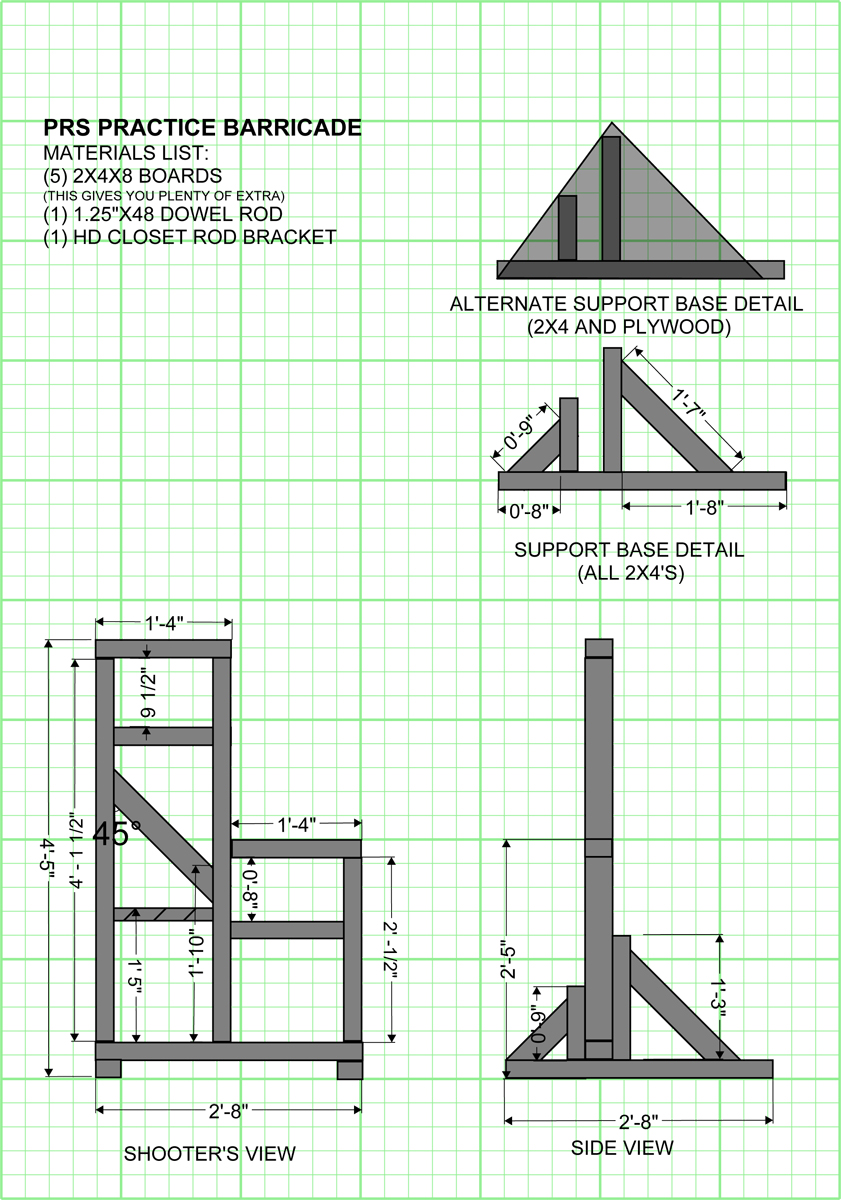 I had a picture in my head of what I wanted my barricade to look like and these are the revised plans based on the dimensions that I used to finally build it.

Within that framework, I added other features to provide different heights to shoot from and help shake things up a little bit.  Although I didn’t do it on this barricade, you can also add plywood to the front with different shapes cut out of them to create portholes to negotiate and shoot through. Some simple touches that I did add were a 2X4 placed at a 45° degree angle and a section of closet rod to create different shooting surfaces instead of just flat 2X4’s. Some other options that I’ve seen used on barricades to add another layer of a challenge are cargo straps or rope and spring-loaded PVC pipe secured between the uprights. 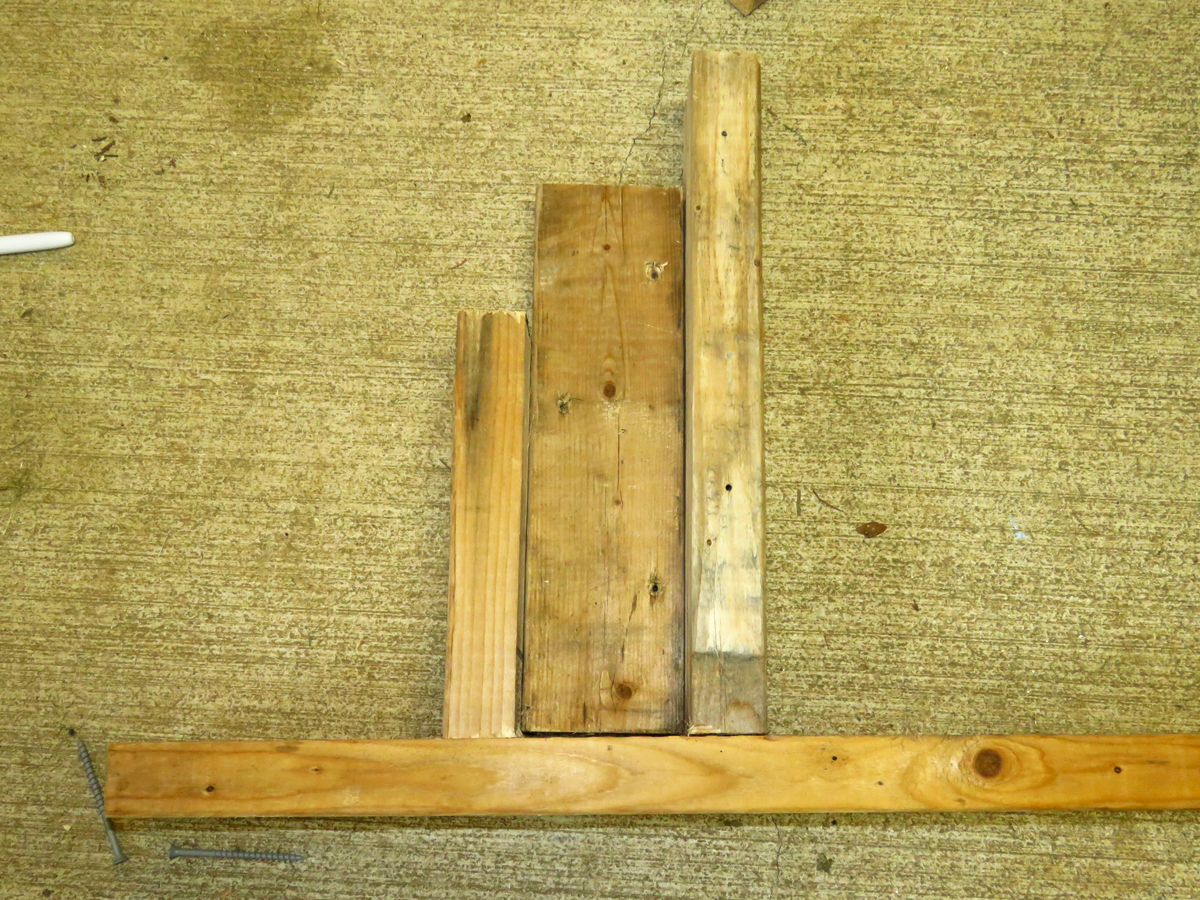 When you’re building the support bases, use a scrap piece of 2X4 to make sure you get the proper spacing on the uprights for a good friction fit.

The base for this barricade is simply a friction fit and if done right it should fall down into the base with a little gentle persuasion and hold there without any added fasteners. The base can be made completely from 2X4’s like I did but another variation is to do away with the 2X4 braces and add a section of plywood to the outside. My recommendation is that you put about two thirds the length of the base in front of the barricade to give it more stability as you push forward. After the barricades are built a good coat of paint will help protect them from the elements and give it a personal touch. 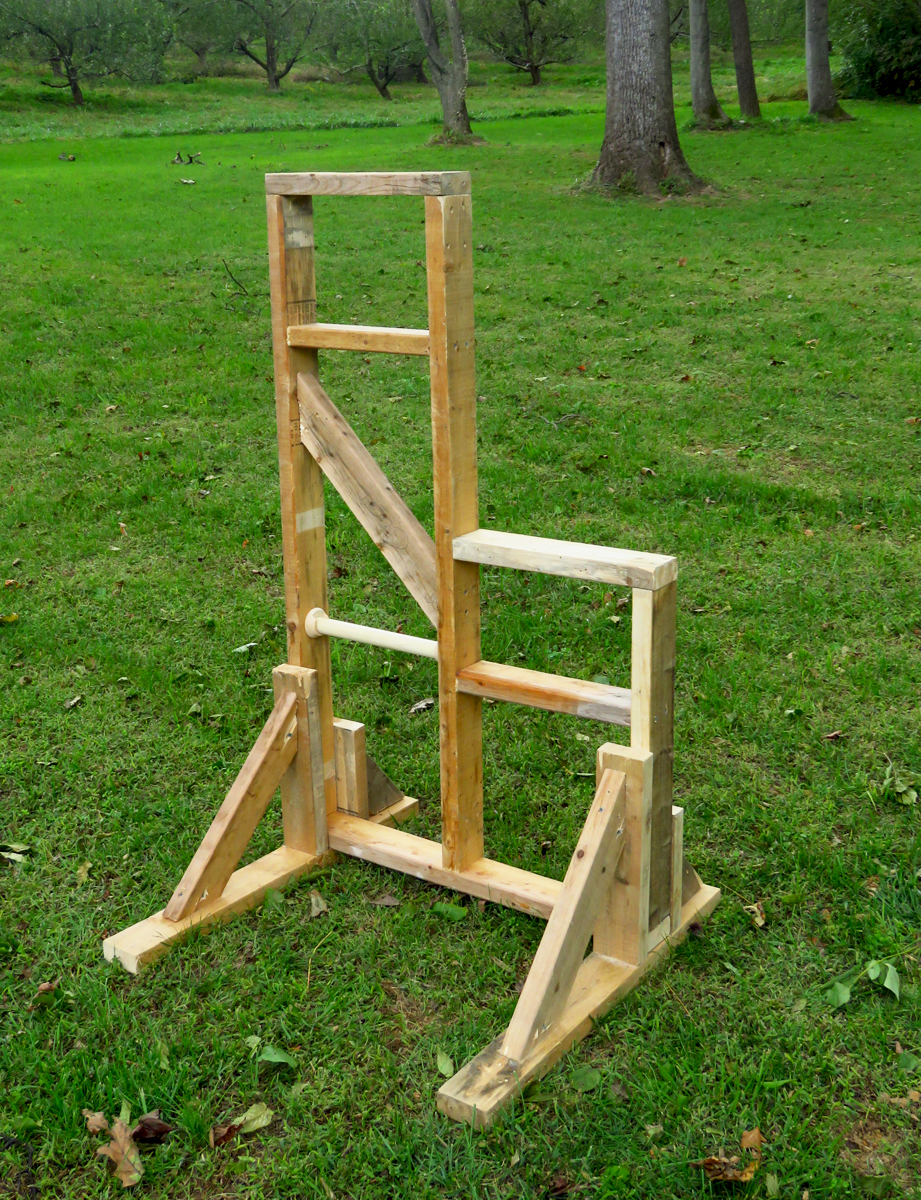 There we have it, one deluxe reclaimed wood practice barricade. This will probably end up getting painted to protect the wood and hide some of the sins from construction.

Plain Jane step-type barricades aren’t the only transportable barricades that you can make to practice with at home and the range. Tank traps are common at many matches and they can be deceivingly hard to shoot off.   Most of the ones that I’ve encountered have been made out of 4X4 lumber, which makes them incredibly sturdy but also pretty heavy for one person to move around and set up. One way around that, of course, is to make it from lighter materials like 2X4 lumber or 2″ Tree Stakes that you find at many garden centers. Since I had an abundance of 2X4’s that’s what I made my tank trap out of but I did need a few things from the hardware store, mainly two 3/8” carriage bolts, two washers, and two wing nuts. I wanted to use the wing nuts because it allows me to set up and take down the tank trap without having to use any tools, which I’d probably leave at home anyway. 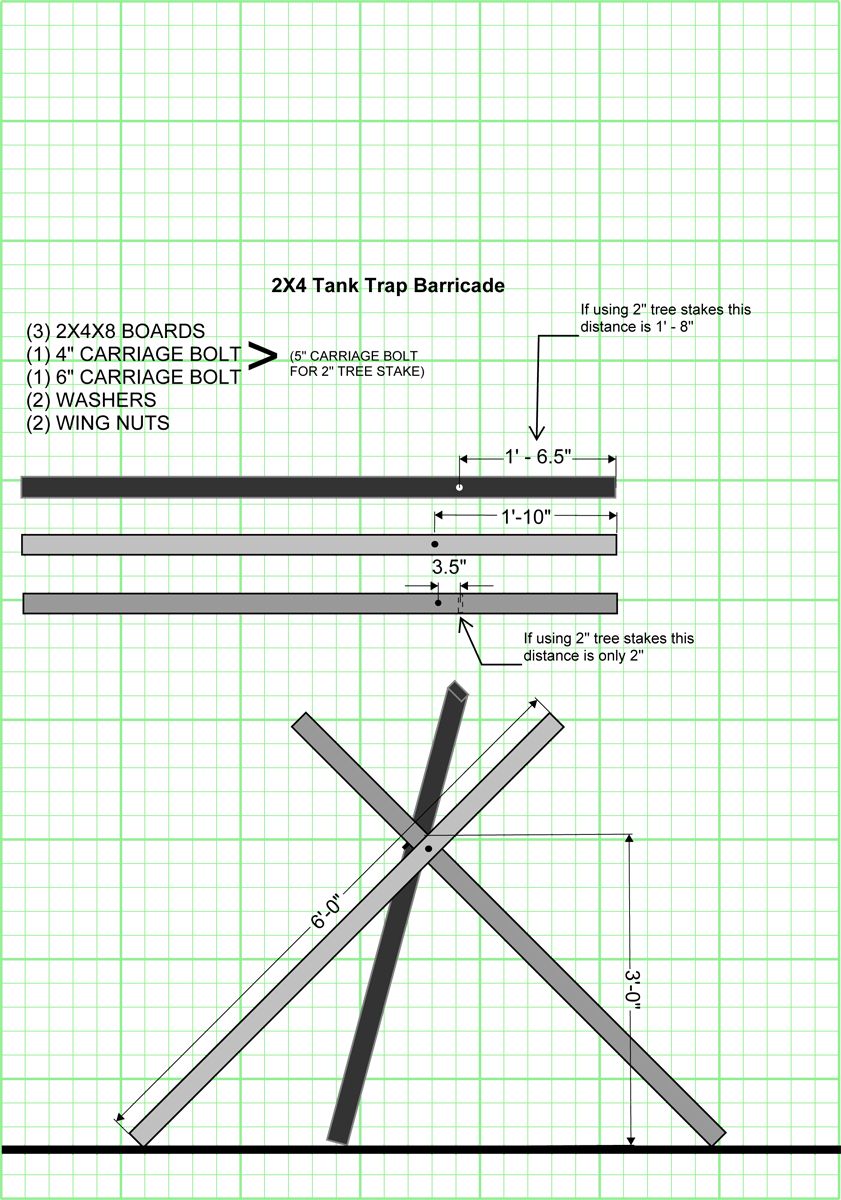 The plans for my tank trap, surprisingly I only found one other set on the internet but these are super easy to make. There’s maybe $15 in materials here.

Building the tank trap is pretty easy and I knocked it out in less than 30 minutes after I cut three pieces of 2X4 lumber down to six-foot lengths. 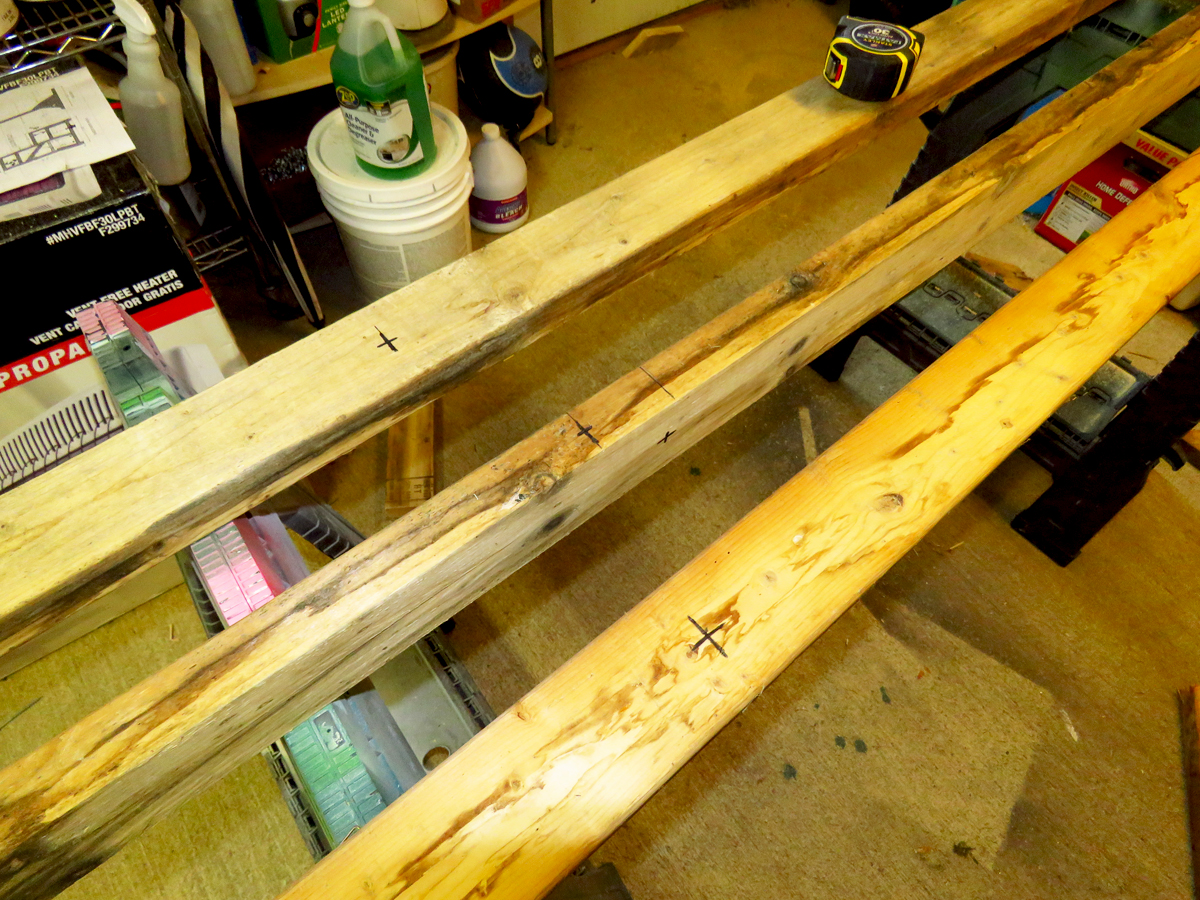 Getting the holes marked for drilling. Note that the center board is going to get two holes drilled through it, separated by 3.5.”

Two of the pieces got a 1/2″ hole drilled through the face 1′-10″ from the end using a spade bit. I took one of those two boards, turned it up on its edge, and drilled a hole 3.5″ closer to the end. On the third board, I drilled a hole through the face 1′-6.5″ from the end to keep it in line with the hole in the other board and let whole trap fold up so the ends are even. Drop your carriage bolts through the boards to connect them all together and tighten down the wingnuts. The distance from the ground to the crook where you’ll shoot off of should be about 3′ give or take a couple of inches. 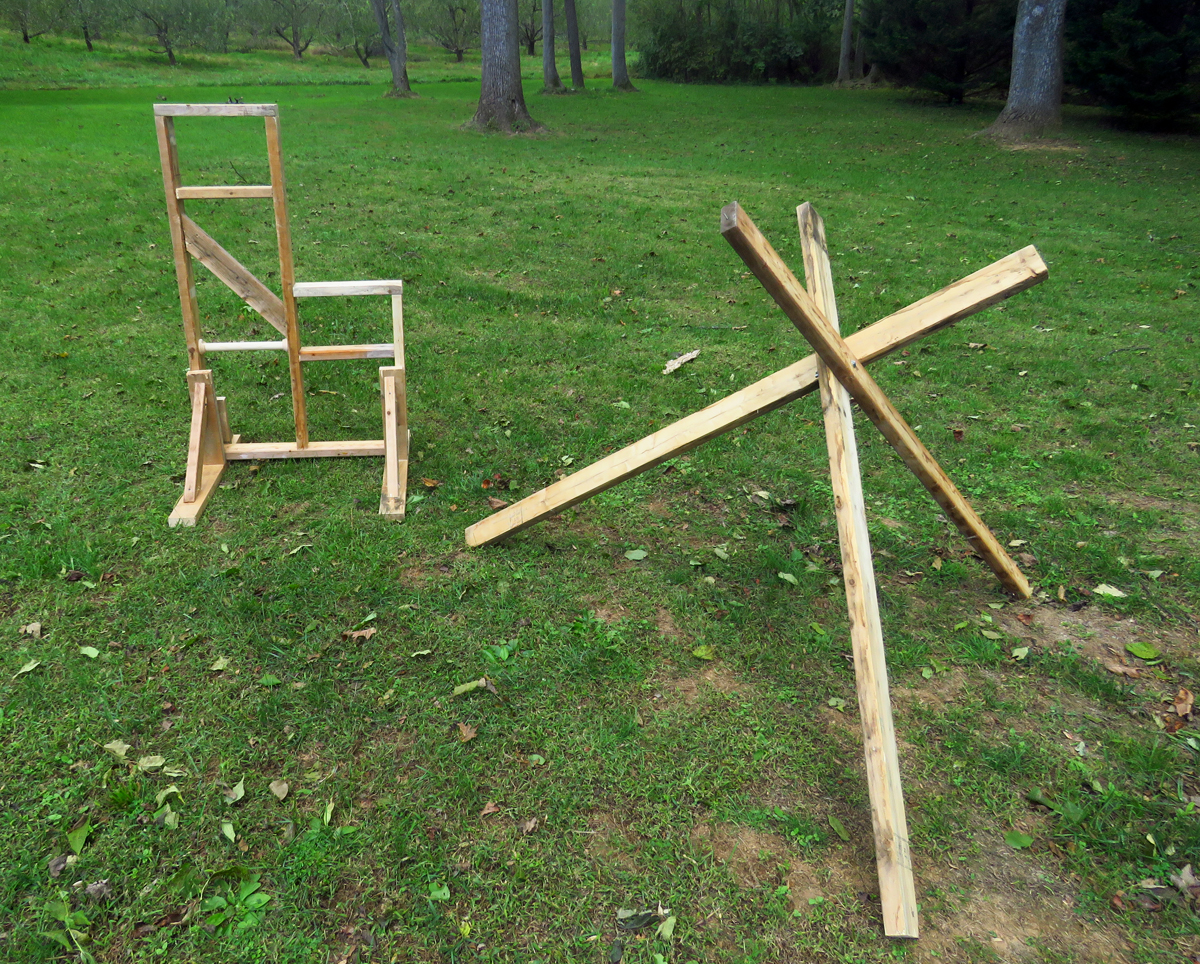 All done! Ended up using most of the lumber that was pictured earlier since about 1/3 of it was no good for one reason or another. I can now take these to set up at home or at the range to work on positional shooting or set up mock stages. 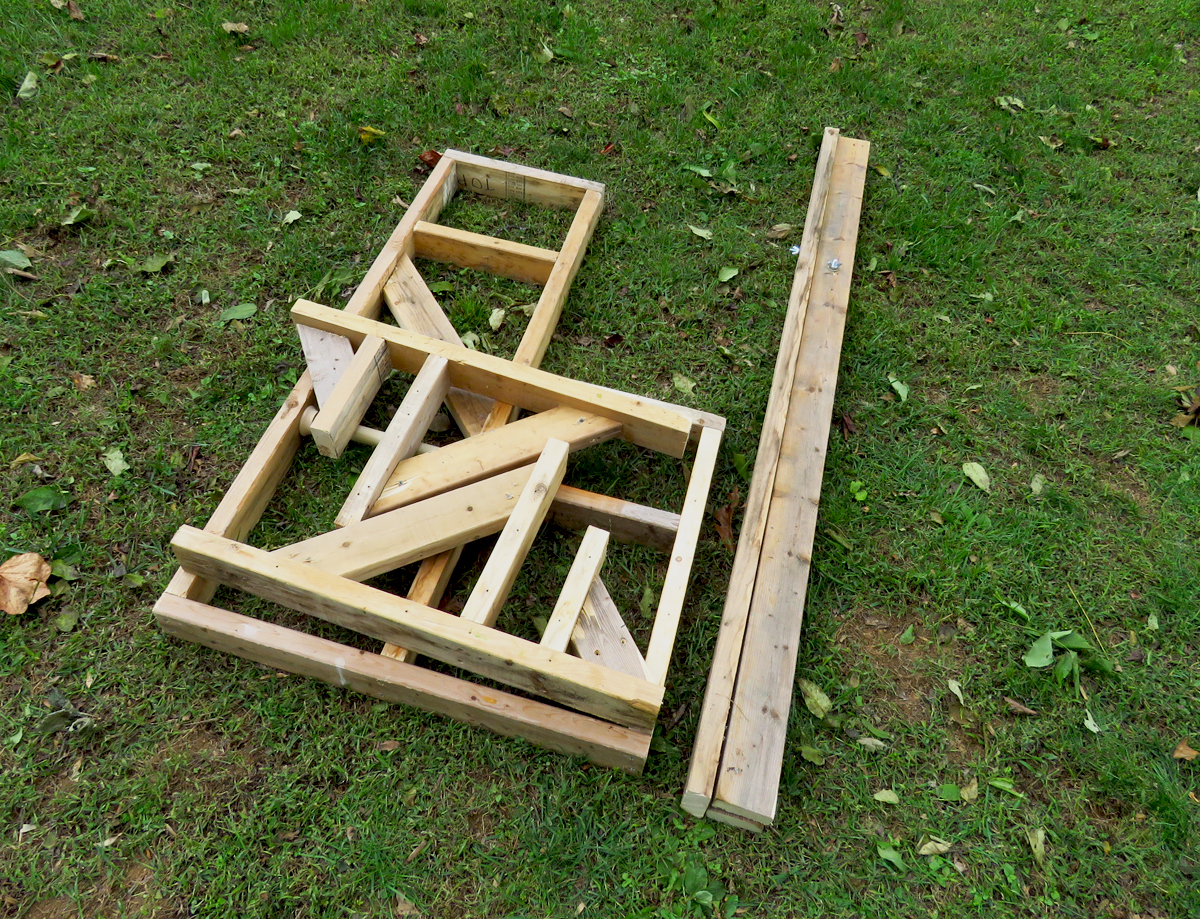 Both barricades break down to be incredibly compact and easy to carry for one person. 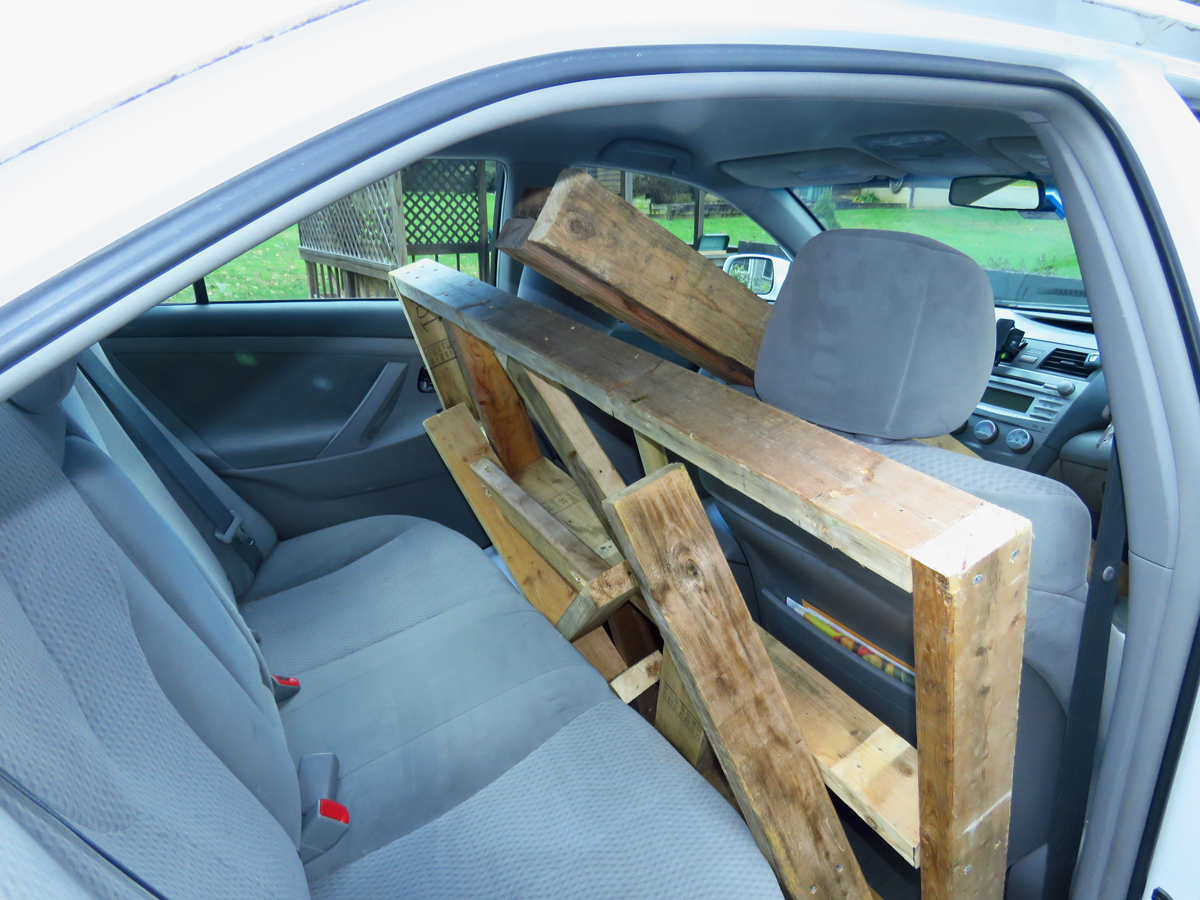 The barricades fit into my Toyota Camry with little effort and with plenty of room to throw my rifles, pack, and ammo in the back seat too. Plus, the door closed perfectly.

Now, not everyone is going to have the will or ability to build their own barricades from scratch for various reasons. That doesn’t mean your barricade options are kaput though, there’s a lot of things that you can use around the house and at the range.

Chairs can make surprisingly good props for some improvised barricade practice if you can’t have your own barricade.  While some people see a chair as just something to sit on, the raised back and seatwork out well to simulate the kneeling and sitting positions on a typical barricade. Throw a rear bag or Game Changer over it and you now have a practice barricade that you didn’t have to build and there’s one practically everywhere you go.

There’s a step ladder lurking in the garage or basement of most homes to use to put up Christmas lights or hang a picture.  Using that step ladder as a shooting prop for barricade practice has probably never entered anyone’s mind and yet it sort of does make sense. The top of a typical 4 ft step ladder works for a low standing position and the steps can be your kneeling and sitting positions. Additionally, the boxes formed by the steps and the sides of the ladder can make you work on getting the gun into and out of tight places, which is an aspect commonly seen at matches.

It’s always good to just get out and build something and if that something can help me, or someone else, be a better shooter, that’s just icing on the cake.  These barricades help me get more comfortable shooting from those weird, awkward positions that are sometimes found in a competitive environment.  Barricades can also be just as useful for non-competition scenarios such as defensive training, getting ready for a hunt, or to just make your next range trip more fun.

For tips on how to shoot off of these barricades check out this article here at GunsAmerica Digest: Intro to PRS Part 2: Barricades

About the Author:  Ian Kenney is a lifelong firearms enthusiast and a veteran of the Global War on Terror serving for six years in an infantry reconnaissance platoon. For over a decade, he has been actively competing in precision rifle and action shooting competitions, including the Precision Rifle Series, IDPA, and 2-Gun matches. Ian has also contributed to multiple online publications, covering general firearms topics, precision rifles, and helping to improve the skills of shooters.