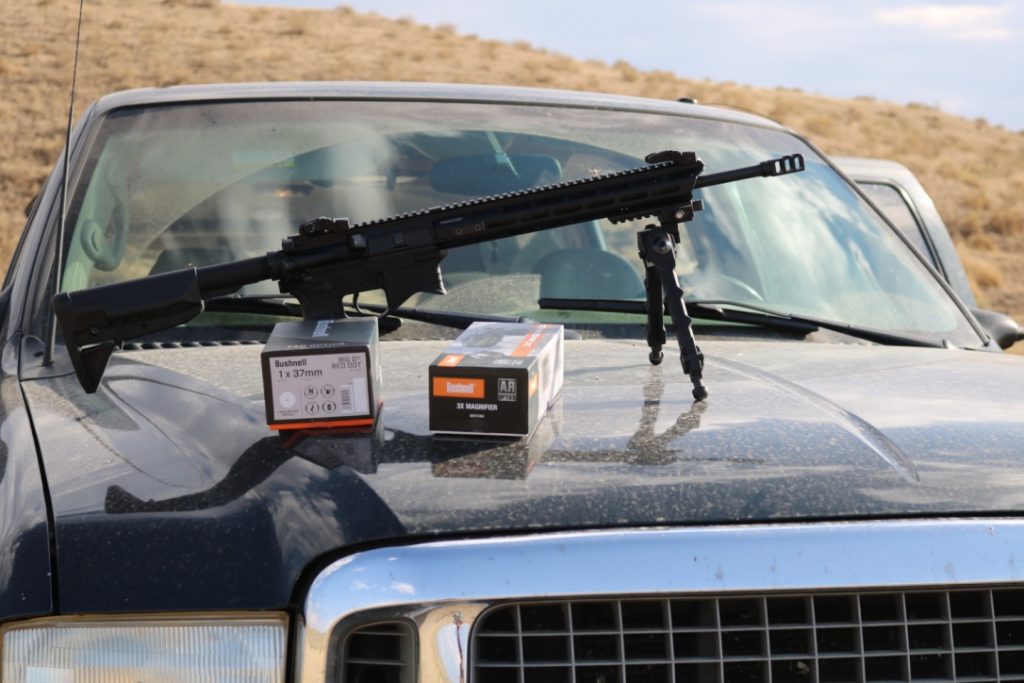 Red dot sights have become the de facto weapon of choice for AR-15’s following the huge successes in military use for the GWOT. Whatever you may have thought of this when it started, red dots for rifles have proven to be durable enough for combat in some of the worst environments on earth. They have changed things to the point even the USMC no longer teaches iron sights in basic training, a day I thought I would never live to see.

Why has this shift happened? Well, the reasons are many. Red dots work in any light, without a need for specialized tritium inserts that are still sketchy in mid light. With only a dot to track, the need for rapidly shifting focal planes is negated. In simple terms, that means it is easier to use under combat conditions. On a range, against static paper targets, the advantage is hard to grasp. But in the real world, targets tend to move. A lot and fast, if tactical Darwinism has already been at play for a while. Focusing on a front sight means lack of focus on the target, which often translates to a miss. An electronic red dot makes it much easier to use “soft focus,” overlaying the dot on a moving target while keeping the target in focus. 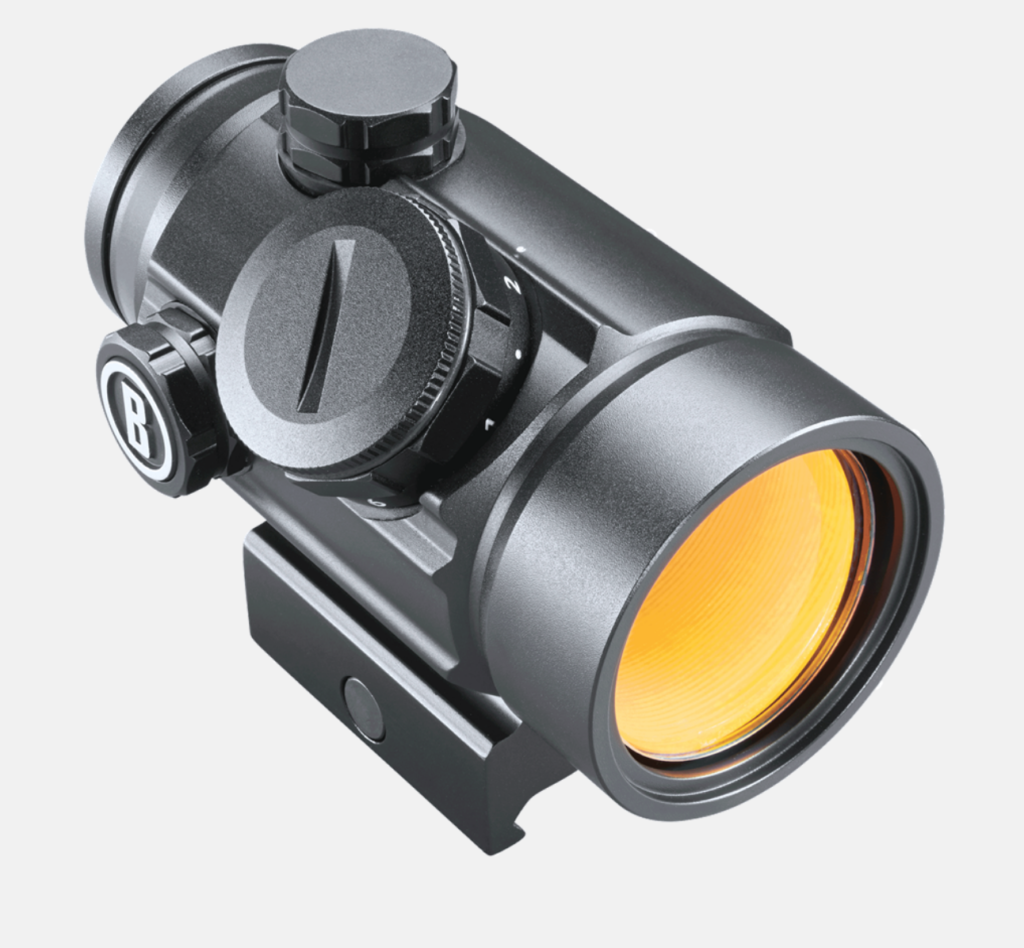 Big D, with its 37mm Objective

The last point that the rifle purist among us don’t want to hear is that learning is easier with a red dot. I believe in irons, and I think a man is missing out by not learning to use them. Like a standard transmission in a Jeep, it is just something you should know how to use. (For our younger readers, standard means a stick. And a clutch pedal. That you have to use in combination to make the vehicle go. You can’t just press the gas. The car won’t shift gears on its own. Paddle shifters don’t count. Rant over.) But I cannot deny it is easier to teach a new shooter to use a red dot. You still need all the rifle fundamentals to make a reliable hit at any kind of range, like trigger control and breathing. But taking sight alignment and head position out of the equation does shorten the learning curve significantly. Having taught a large number of third-world troops to use one, I can assure you this is true. Just the thought of trying to make them competent with real irons still keeps me awake some nights. 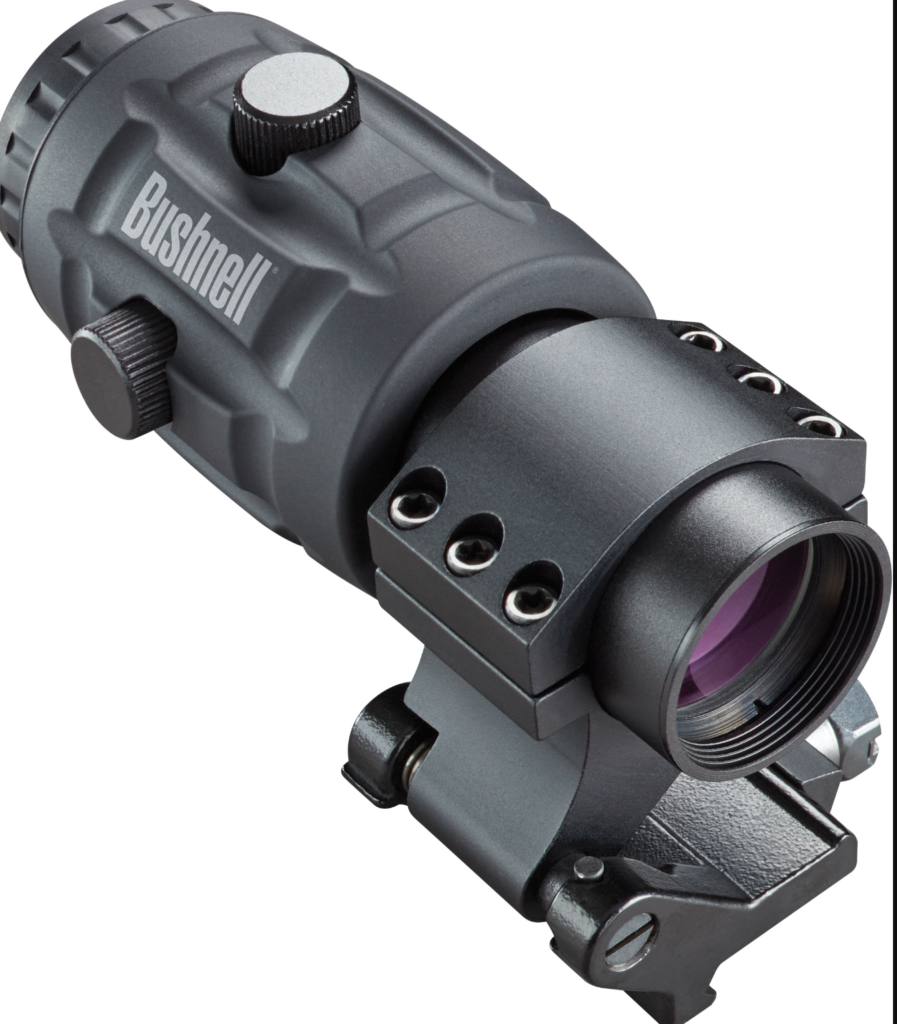 So, moving on to our new Bushnell package. I will also be the first to admit that a red dot sight has some advantages and some drawbacks over other sighting systems. The first thing that comes to mind is a red dot against a mid-range magnified scope, such as the excellent Bushnell SMRS 1×6.5. At close range, inside 100 meters, a red dot is faster. Because a red dot is truly parallax free and doesn’t have an eye box, a trained shooter can almost always sling it faster. If I were doing CQB for a living again, it would be all red dot all the time. Past 100m, a magnified optic is usually better, and really starts to blow the doors off a red dot at around 300m.

Yes, you can shoot a red dot past 300m. People shoot irons at 1000 all the time, I get that. But a magnified optic does make it easier. And when targets start getting smaller, that matters even more. And this is really where the Bushnell 3x magnifier for the red dot comes it. It helps bridge the gap between a red dot and a scope. 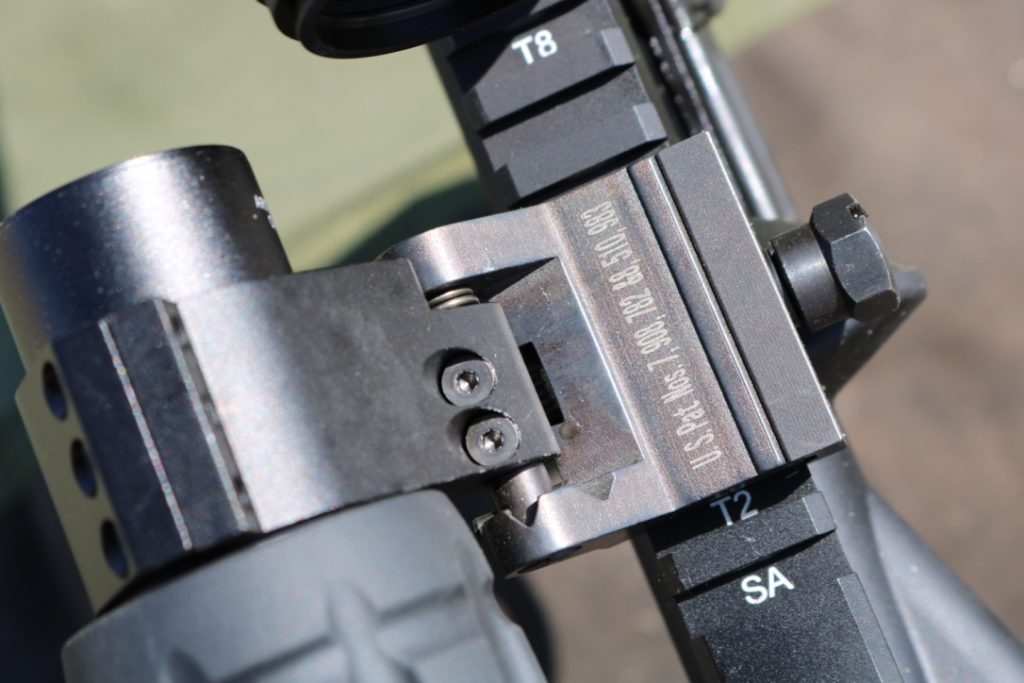 The set up is pretty simple. The red dot is mounted on the front edge of the upper receiver, with the red dot right behind it, almost touching. The magnifier swings out of the way by pressing it forward and rotating either right or left. Which depends on which direction you mounted it. So you have all the strengths of a red dot for up close work and a 3x closer view with a snap of the wrist. 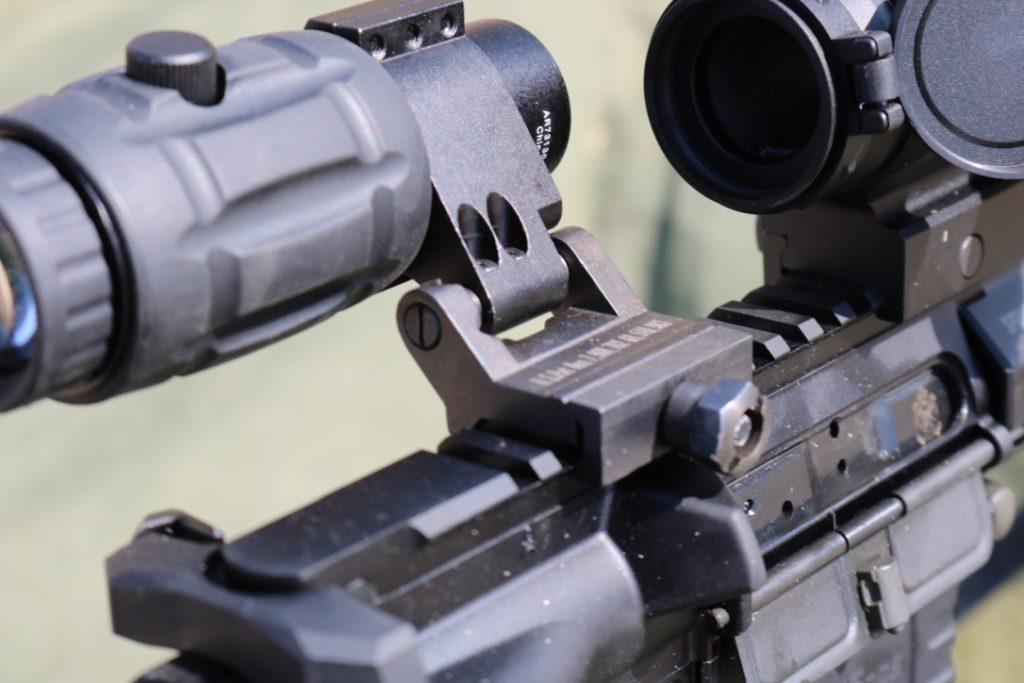 Set up for left rotation

This is not a set up without precedent. Around the 2006 time frame, a similar system was in common use for assault troops with either Aimpoint or Eotech red dots. With the magnifier down, you are ready for the street fight on the sometimes-long walk to the target. When you get to the breach point, everyone rolls the magnifier up, and you are ready to get some at house range. Then when the assault is over, you slap it back down for rooftop security until the intel goons are finished taking the place apart. 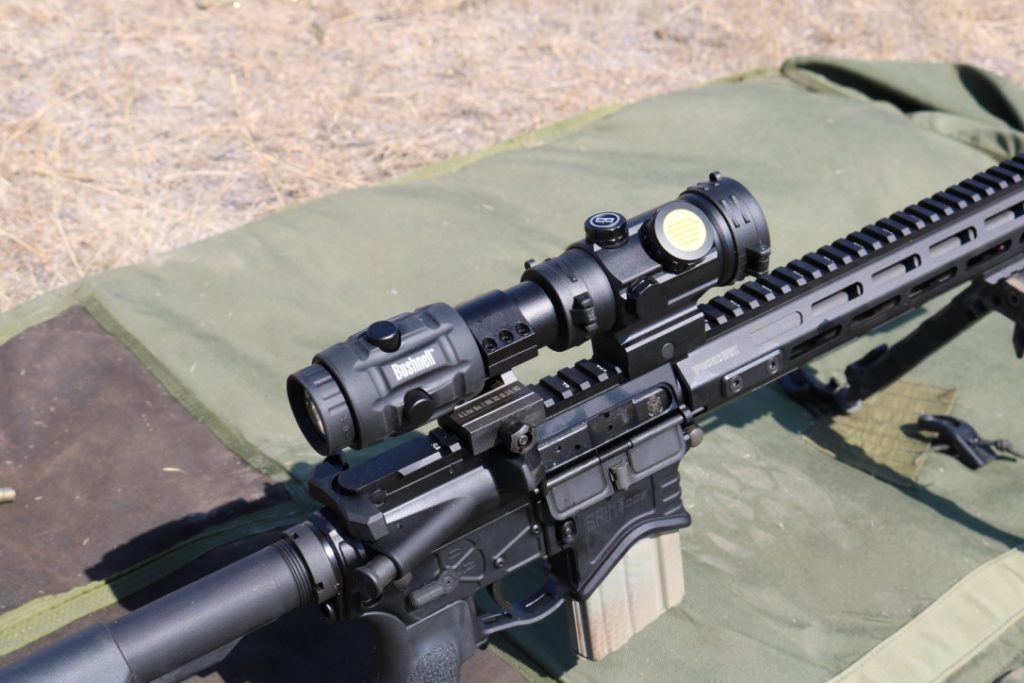 Side view, magnifier down

The Bushnell package is well put together and seems sturdy enough for serious boy use. The Big D dot is 3 MOA, and bright enough for the midday desert sun with ease. The 37mm objective end offers a huge field of view and massive light transmission. Out of the box, it is already in a Picatinny mount. A couple twists with the torque wrench, and you are ready to zero. 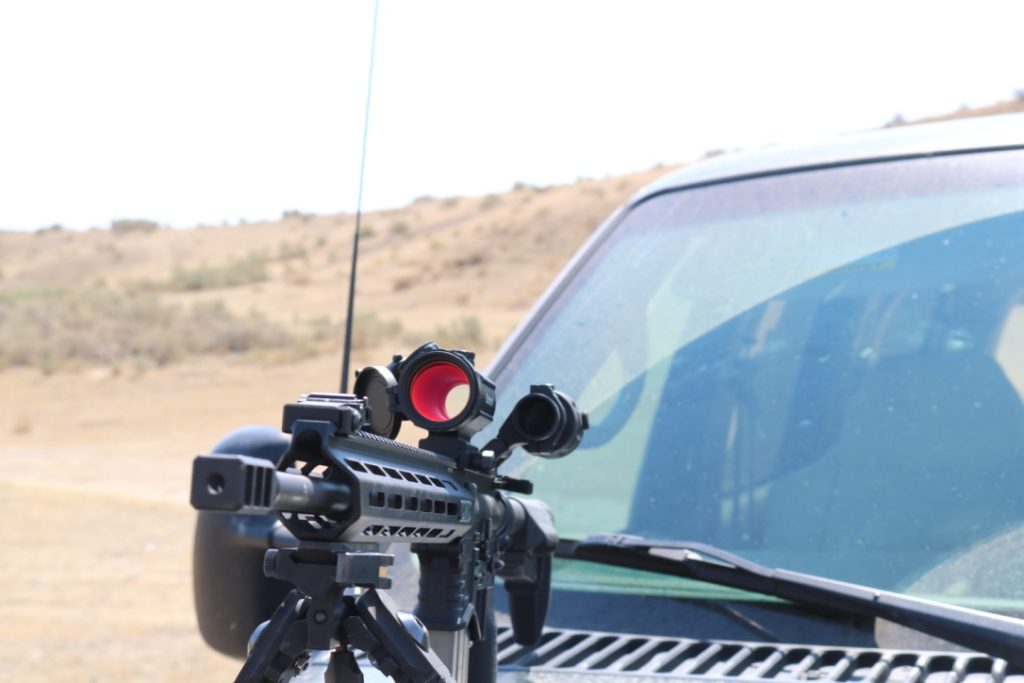 The clicks tracked true and the Big D was simple to zero. With a standard CR2052 battery and a 50,000-hour battery life, this one is ready for duty out of the box. 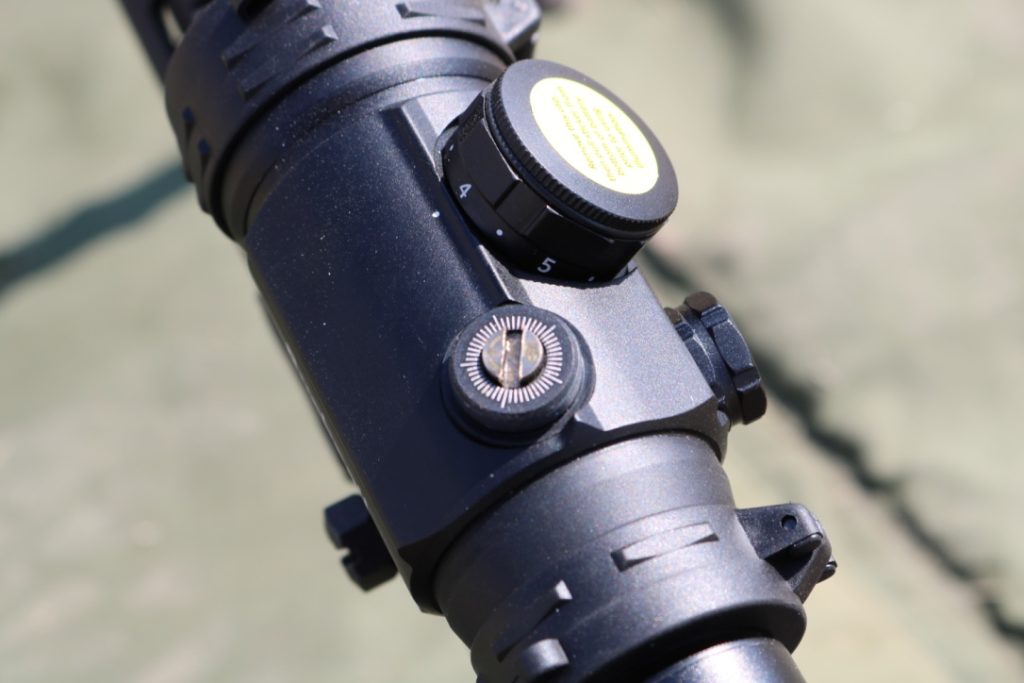 The 3x magnifier, called the Transition, takes a little more work. It will only rotate one way once mounted, so it is up to you which you prefer. I set mine up to rotate to the left, or inside of the rifle, which most right-handers will prefer. Since the magnifier doesn’t have to be zeroed, levels won’t be required. There are adjustments for the eye box on the magnifier, so you do want to put it close to straight up and down. But it also isn’t a 25x HDMR. With the enclosed hex wrench, you put the magnifier in its ring. Then attach the ring to your rails with the same ½ inch torque wrench. Problem solved. 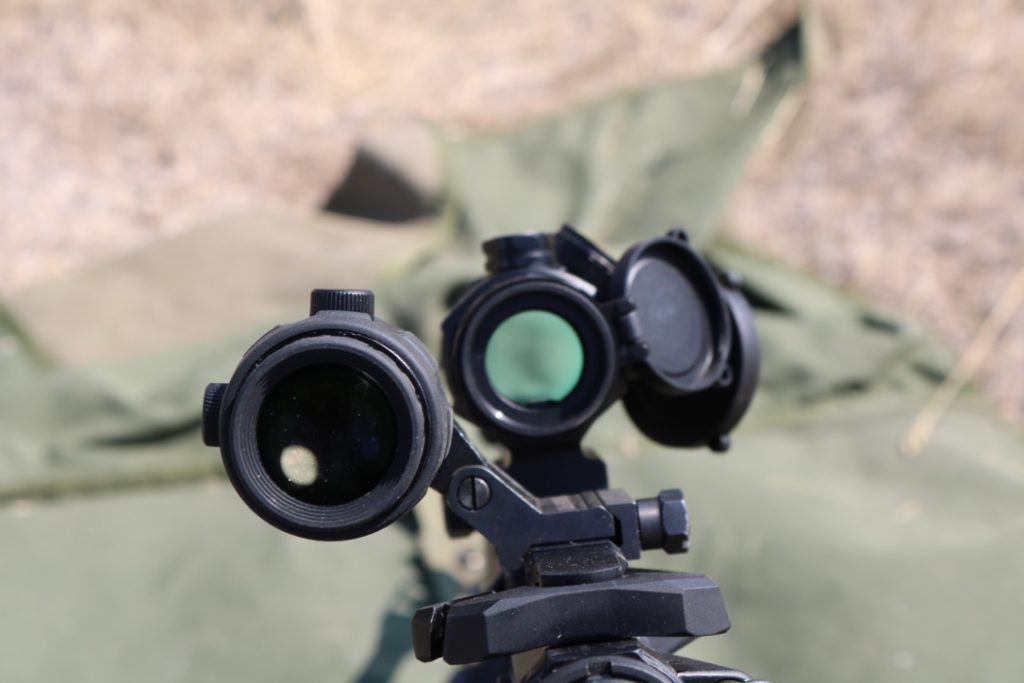 The magnifier is spring loaded with a solid mounting bar. To move it, you first press the magnifier forward, then rotate. With a little practice, this becomes fast and seamless. 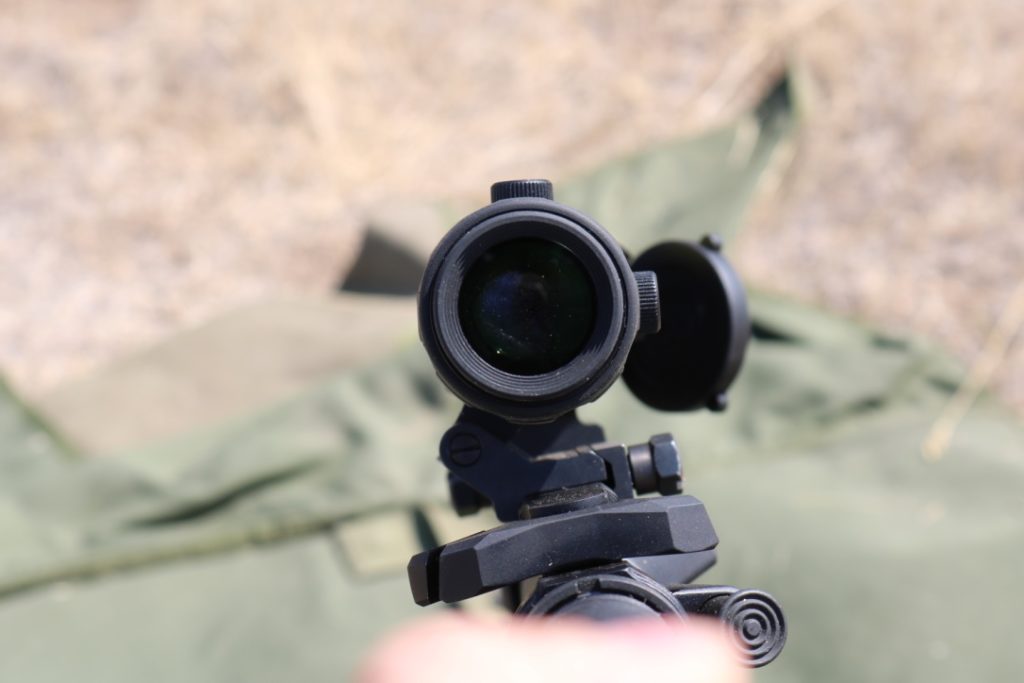 The Big D has an MSRP of $358 while Transition magnifier is $239. At that price, these are going to be hard to beat. Compared to the top end of the red dot market, you could buy both and a case of ammo, with gas money for the range left over. If you need a new red dot system, this is one I can highly recommend. For the money, this one is hard to beat.

Visit Bushnell to learn more about their products by clicking HERE.

***Shop GunsAmerica for your next Bushnell sight***

Next post: The CMP’s Advanced Maintenance Class for the M1 Garand