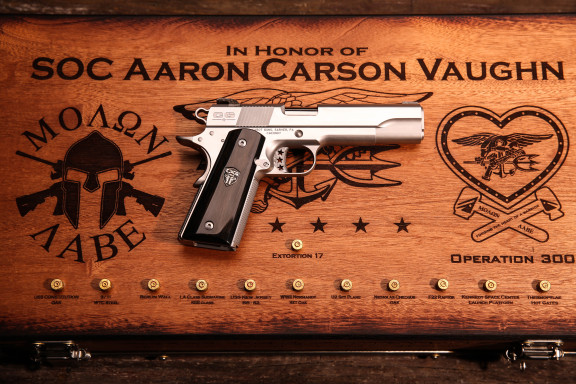 Industry-leading manufacturer Cabot Guns has unveiled their latest show-stopper just in time for New Year’s, the Gold Star Gala Pistol. The gun is a tribute to fallen Navy SEAL Aaron Vaughn and will be auctioned at the Operation 300 Gold Star Gala in Naples, Fla. on December 29.

Operation 300 was founded in Vaughn’s memory and supports children who have lost parents serving in the military. The organization sponsors adventure camps and other activities while offering them mentorship and community. 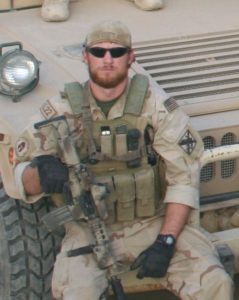 “We are proud to be a part of this tribute to SOC Vaughn, a true hero who made the ultimate sacrifice protecting the rest of us,” said Cabot CEO Rob Bianchin. “We have tried to place many symbols of American military might and soldiers’ personal sacrifices into the pistol itself as well as the case.”

Vaughn and 29 others died in 2011 when their Chinook helicopter was shot down over Afghanistan. The Gala Pistol auction will raise funds for children supported by the Operation 300 foundation.

The 30 people died on August 6 when they were shot down by a Taliban fighter outside of Kabul. The dead included 15 members of the Gold Squadron of the Naval Special Warfare Development Group, or SEAL Team Six. Just three months earlier members of Team Six killed Osama bin Laden.

The tribute pistol comes with a custom display case with elements recovered from the Extortion 17 helicopter crash. The gun itself is machined from a single block of steel with wooden grips made from reclaimed wood from the USS Constitution, or “Old Ironsides.” The trigger and rear sight are made with 4.5-billion-year-old meteorite steel, a Cabot signature. 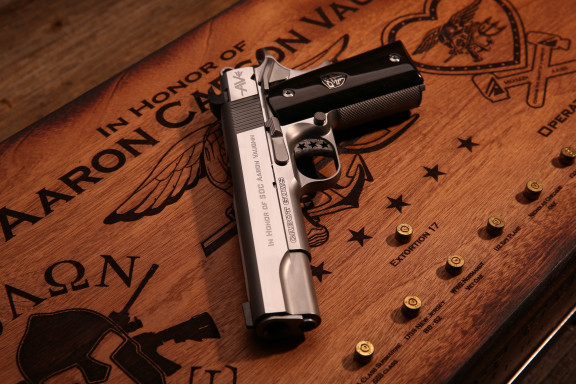 Like all Cabot guns, the Gala pistol is made to the highest possible standards using aerospace manufacturing techniques. (Photo: Cabot)

A number of other artifacts are on display in the case as well. It includes steel from the World Trade Center recovered after 9/11, a piece of the Berlin Wall, teak from the deck of The battleship USS New Jersey, oak from Normandy from the Second World War, part of a Los Angeles nuclear submarine and a token from a Lockheed U-2 spy plane.

See Also: The Trump 45 by Cabot Guns is a Shootable Heirloom

The case was made by craftsman Jimmy Hintzke, a retired SEAL. Made by hand from mahogany, it features historically significant brass casings embedded on the outside.

This year’s Gold Star Gala will be hosted by Sean Hannity and guest star Ron DeSantis, Greg Jarret and Dan Bongino in addition to other media personalities, prominent members of the military and Vaughn’s family.