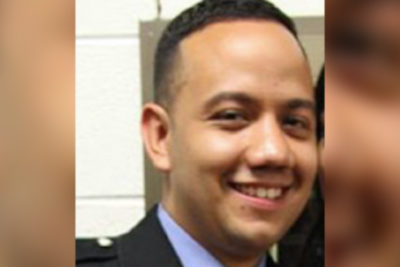 Cicero Police Officer Luis Duarte was saved, in part, by the heroic actions of a concealed carrier. (Photo: LinkedIn)

A concealed carry permit holder is being praised by Chicago-area police for helping stop a shootout between officers and a suspect that took place last week near a busy interstate.

The incident began Friday, Sept. 14, when Daniel Mageo, 27, opened fire on two Cicero, Il., police officers who were attempting to pull him over. Mageo hit 31-year-old Officer Luis Duarte, but Duarte’s partner and an armed citizen returned fire and forced an end to the gunfight.

“We were lucky enough to have a citizen on the street there who’s a concealed-carry holder, and he also engaged in gunfire,” Cicero Police Supt. Jerry Chlada Jr. said outside Mount Sinai Hospital, according to the Chicago Sun-Times.

Cicero Town President Larry Dominick agreed. “I want to applaud the citizen, a civilian, who risked his life to help in apprehending this armed suspect,” he told reporters.

Mageo, a California native, was on parole for a July 2014 felony human trafficking conviction involving a child victim. Police attempted to stop his Mercedes when they observed him driving erratically, and when he tried to drive away he was caught in traffic on the ramp to southbound Interstate 55.

Mageo suffered gunshot injuries as well and is currently in custody and hospitalized at the Cook County Jail. He’s been denied bail and has been charged with two counts of attempted first-degree murder of a peace officer and aggravated battery to a police officer.

Durate had to undergo multiple surgeries to remove the bullets in his arm and leg, but was just released from the hospital and is continuing his recovery at home.

“I am very thankful to see Officer Duarte progressing in his recovery and I will dedicate every resource that I have to make sure he and his family are as comfortable possible during his recovery process,” Cicero police chief Jerry Chlada told local media. “I personally want to thank the men and women of the Cicero police department for rallying around each other during this tragic time.”

Police have not released the name of the CCL holder who intervened.

Next post: BREAKING: Cody Wilson Wanted by U.S. Marshals for Having Sex With Minor, Allegedly