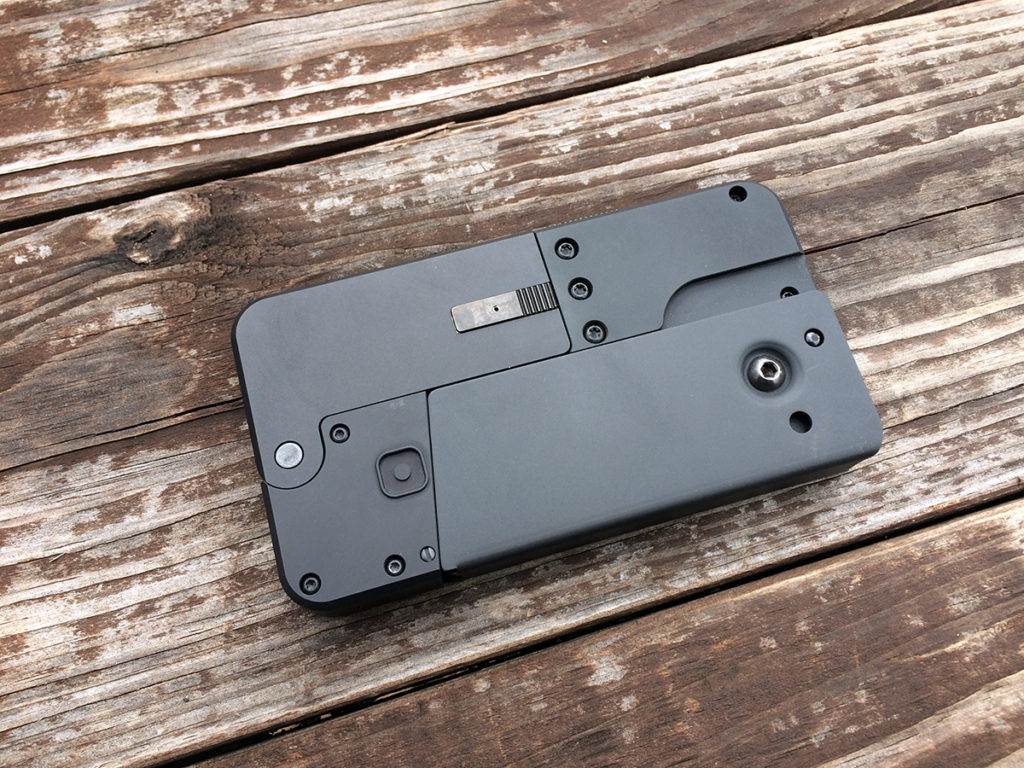 From pen guns to umbrella guns to this insane briefcase gun from H&K, manufacturers have been finding creative ways to conceal firearms for decades. The Cell Phone Pistol (IC380) from Ideal Conceal is the latest iteration in that legacy.

While it wouldn’t be an ideal primary carry gun, the IC380 could perform well in a backup role or in those situations where a traditional EDC handgun would be impractical or inadvisable. It’s also a unique piece to add to your collection, something sure to garner attention at the range or among your gun-collecting friends.

Ultimately, the little 380 handgun performs exactly as you might expect—it’s super concealable, uncomfortable to shoot, and stone cold reliable. 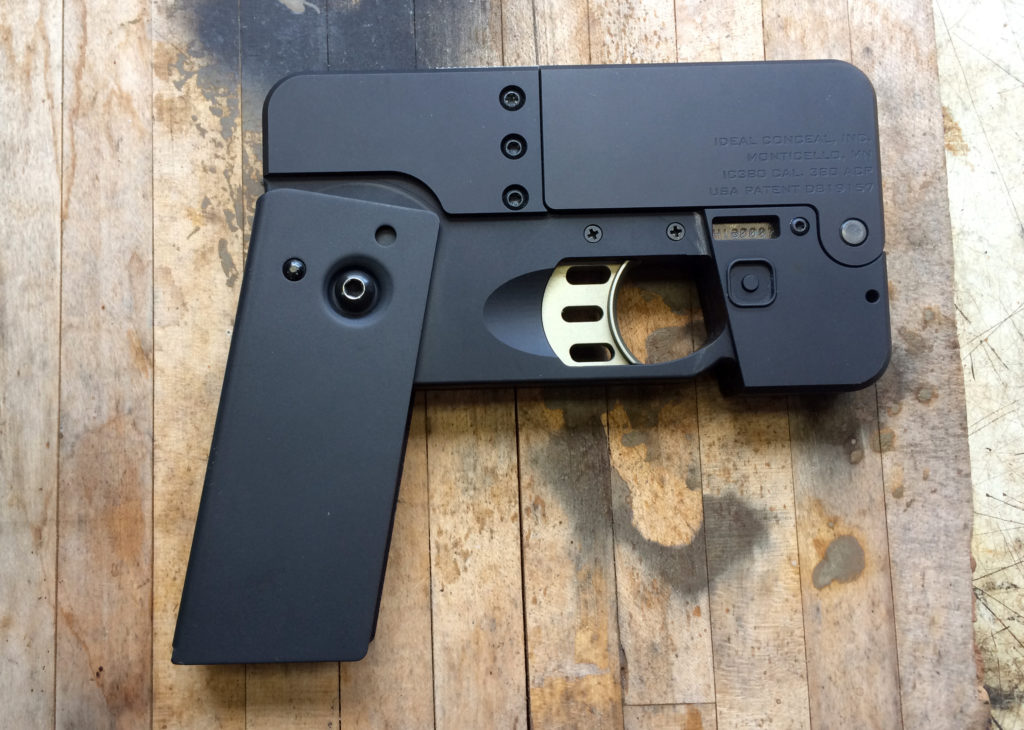 With a quick flip of the pistol grip, the IC380 transforms into a self-defense firearm.

Take this gun to the range or the gun store, and invariably everyone will pull out their cell phones to compare the size and weight. As you can see in the images below, the dimensions are spot-on to most of today’s larger smartphones. Especially if you own a heavy-duty case, the length, width, and depth are comparable. Ideal Conceal even cut a small box on the firearm to resemble a cell phone camera. 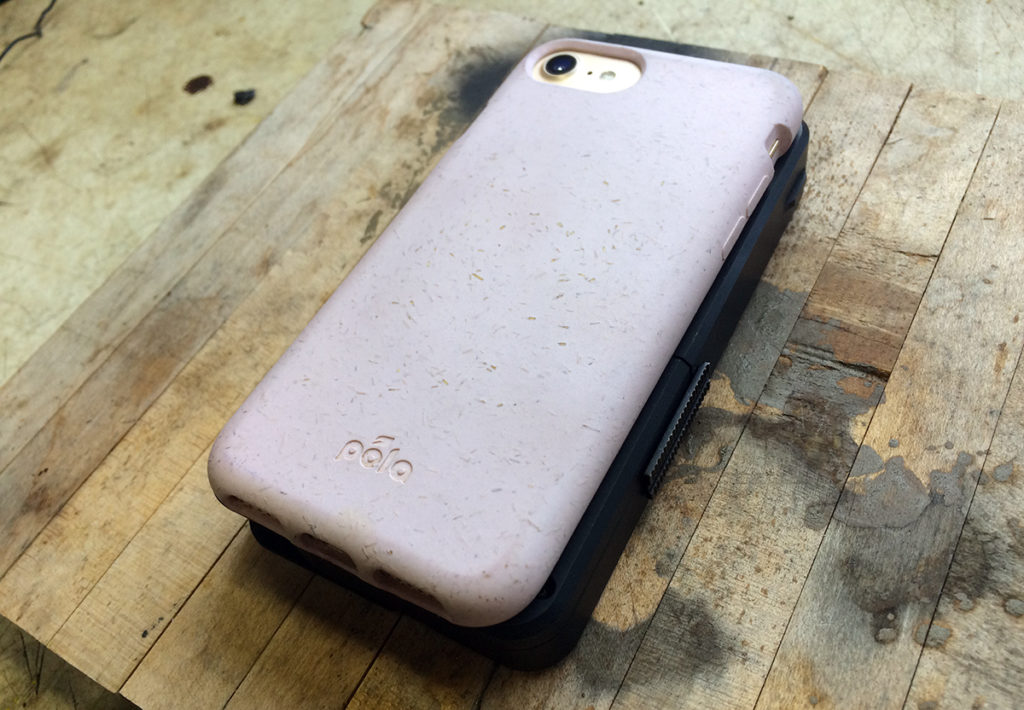 The length and width are almost exactly the same as this iPhone 7. 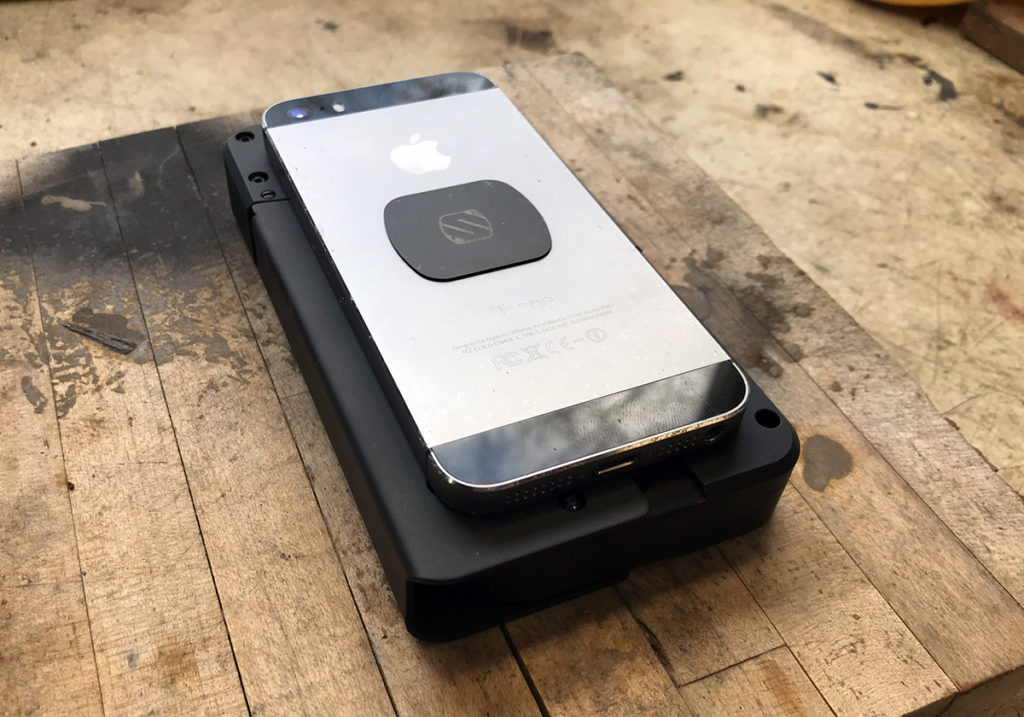 But slightly larger than this iPhone 5.

The difference between a real phone and the IC380 is in the weight. The IC380 is significantly heavier than any cell phone I’ve used, which means a standard cell phone holster probably won’t cut it. Fortunately, Ideal Conceal also offers a holster, which you can purchase from them directly for $35.

I’ve included lots of function tests in the video below, but I wanted to underline the simplicity of the loading and unloading process. New gun owners won’t have any trouble learning how to operate this firearm. There’s nothing to cock or rack and there aren’t any external safeties to worry about. It’s very nearly dummy proof, provided you’re careful about which side the barrels are facing. 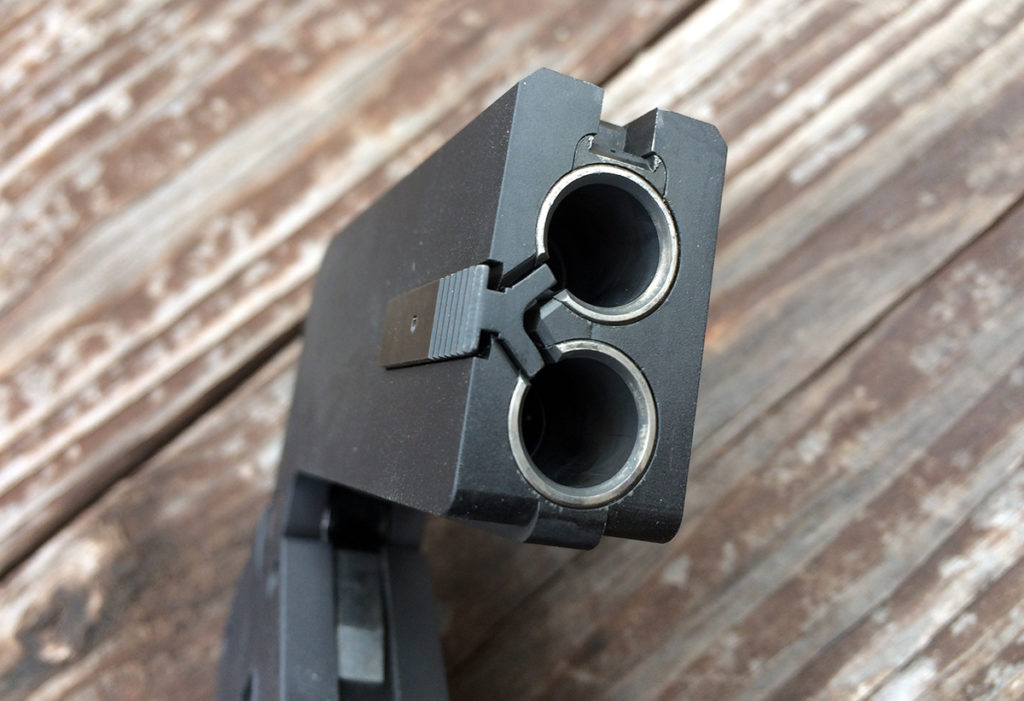 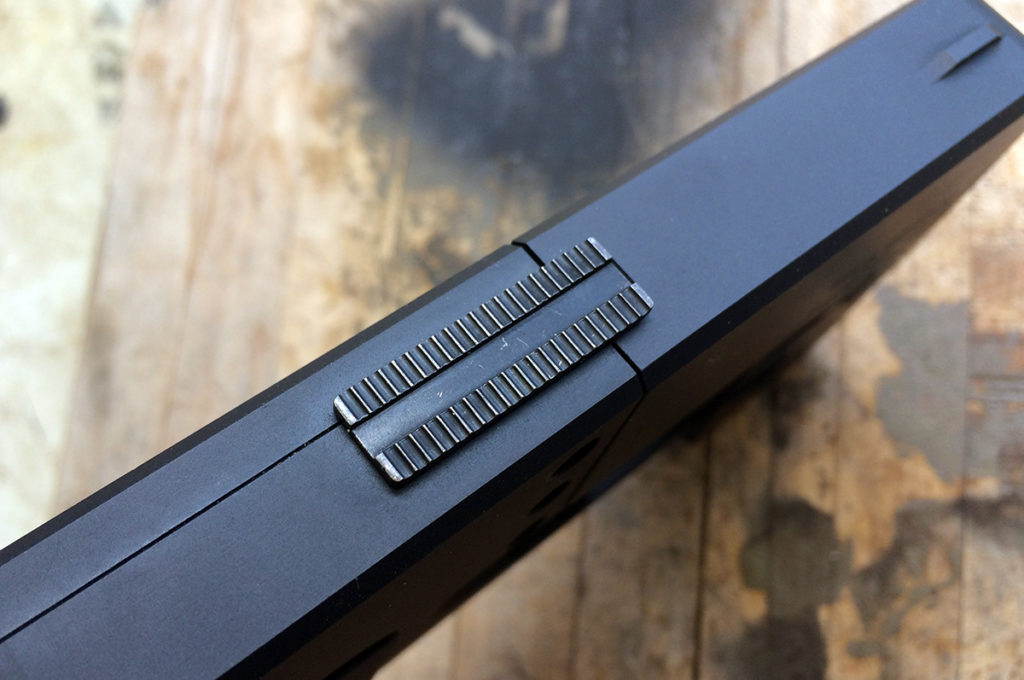 The open action slider doubles as the rear sight, which pairs with a small fin on the front of the gun.

Comfort and accuracy are about what you’d expect. With lighter loads, the IC380 can be comfortably shot for extended range sessions. I didn’t have much trouble shooting through a few boxes of the 95g practice ammunition from Federal. But with self-defense cartridges, the straight metal grip began to hurt the web of my hand after just a few shots. (If you look carefully, you can see my jaw muscles clench while shooting one-handed. I do it for you, dear readers.)

It felt silly to strap the IC380 in a vise and do traditional accuracy testing, so I squeezed off a few rounds from three yards to get a sense of what to expect in a self-defense situation. Accuracy can always improve with practice, of course, but the IC380 is obviously designed for extreme close-quarters. In that role, it could excel. Like a revolver and unlike a semi-auto, the IC380 can fire both shots while being pressed against a surface, which might be necessary during an attack.

The 95g target ammo averaged a velocity of 877 fps and the 99g self-defense cartridges averaged 951 fps. 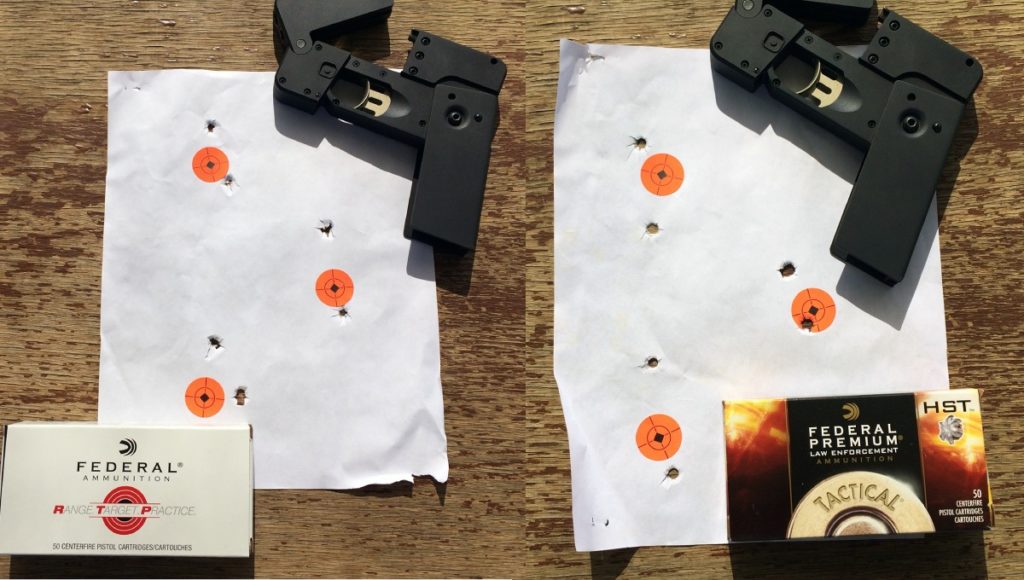 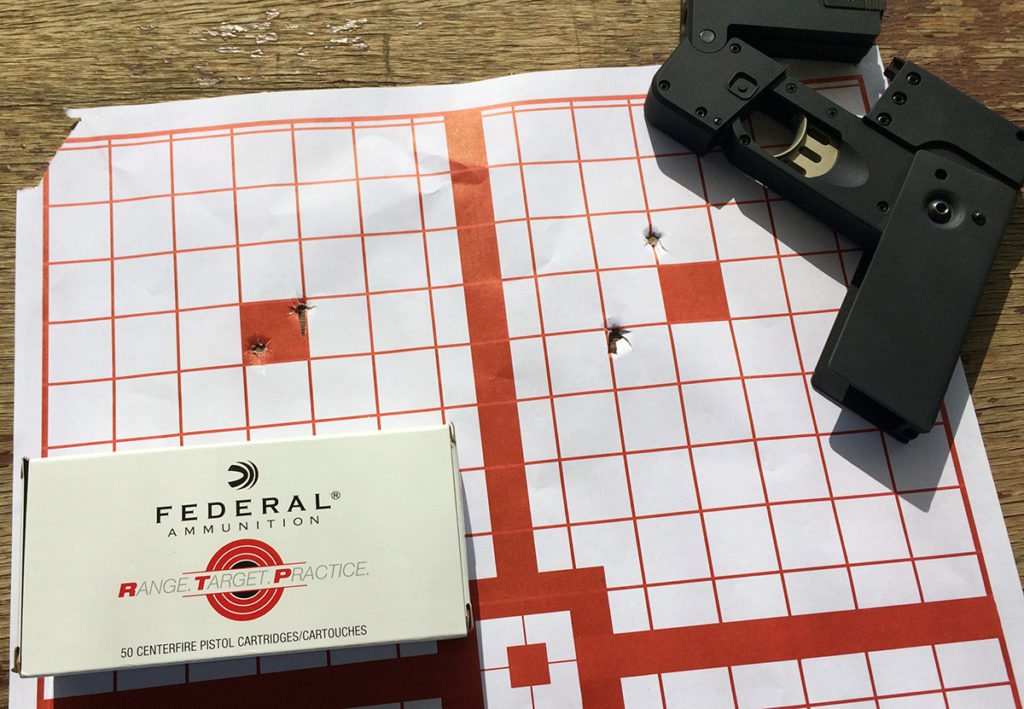 …though at one point I did manage to land two shots in the one-inch square.

Pulling the trigger is a piece of cake but deploying the grip might be a different story. While I found that process easier and faster than I expected, it still adds an additional step over a traditional handgun. As you can see in the video, I found it difficult not to point the gun at myself while deploying the pistol grip. It can be done, but it’ll take some practice.

Also, if your cell phone’s dimensions are similar to the IC380, confusing the two might be an issue. The IC380 is heavier, but if you keep your cell phone in one pocket and the handgun in the other, reaching for your phone when you need the pistol is a potential (serious) pitfall.

Purchasing the holster is one option, though folks might ask why you’re carrying two cell phones. You might also keep the handgun in your back pocket and your phone in your front (or vice versa) to help keep them straight. 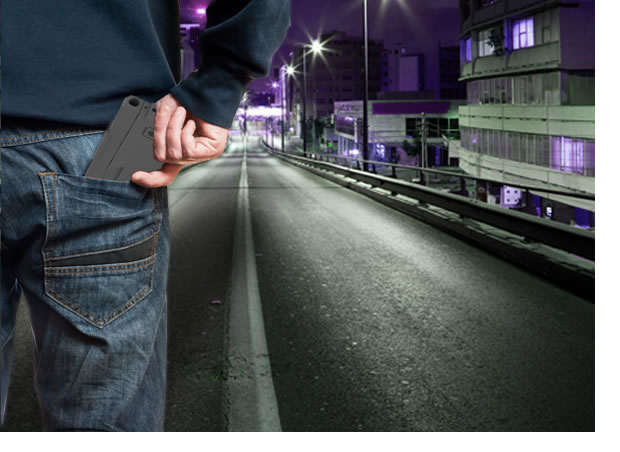 This image is from Ideal Conceal’s website and suggests one potential carry option.

Ultimately, the Cell Phone Pistol from Ideal Conceal is more than a gimmick. It shouldn’t be your first choice, but it’s an effective self-defense tool when your first choice isn’t available. With modern ammunition, two rounds of .380 might be all you need to get out of a jam.

Next post: The Glamorous Life and Gory Death of the Father of Sin City Bugsy Siegel, the M1 Carbine, and Murder Inc.