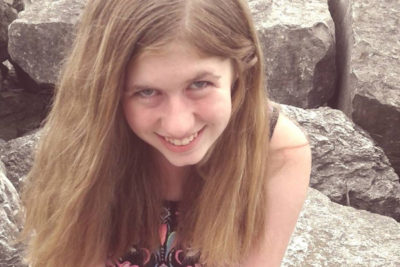 The neighbors who took in Jayme Closs, a Wisconsin teen who disappeared two months ago after her parents were found murdered, were ready in case the kidnapper returned looking for his victim.

“When our neighbor Jeanne came in with Jayme, she said: ‘Get a gun. We don’t know if he’s after us,’” Kristin Kasinskas told Fox News. “So we were armed and ready in case this person showed up.”

Jeanne Nutter found Closs last week wandering through the woods after escaping from her alleged captor, 21-year-old Jake Thomas Patterson. Nutter says the teenager was alone, skinny, and wasn’t wearing a coat or gloves in the winter cold.

“I’m lost, and I don’t know where I am, and I need help,” Nutter recalled Jayme saying.

Nutter brought the girl to Kasinskas’ nearby house to call the police. But while they waited, they knew that Patterson would likely be searching for her.

“My neighbor and I … legitimately thought someone was coming for her,” Kasinskas explained to CNN. “We didn’t even really have time to be scared, it was happening quickly.”

Kasinskas and her husband put their two children in the basement with the dogs “and told them to watch the TV until we said it was OK to come back upstairs.”

Meanwhile, the couple and Nutter waited with Closs in their living room, watching through the windows and hoping police would soon arrive. When police finally pulled in twenty minutes later, the officers took Closs to safety and told the Kasinskas’s they may need to use their firearms.

“The officer told us to get away from the windows and get downstairs,” Kasinskas said. “An officer sent my husband to the back door and told him to stand there with the gun in case he comes that way.”

Minutes later, the Kasinskas’s and Nutter discovered that their anxieties were well-founded: Patterson was apprehended not far from their house. Authorities believe he was driving around trying to find the escaped teen.

“We were kind of terrified when we heard that,” Kasinskas said. “We realized he was in the neighborhood coming back for her.”

On October 15, 2018, Patterson allegedly broke into Closs’s home in Barron County, WI, and killed both her parents. He kidnapped the teen and kept her captive 88 days in a home approximately 70 miles north of where she was last seen.

Authorities say Patterson’s actions were premeditated and that he took “many proactive steps” to get away with the kidnapping, including shaving his head so he wouldn’t leave DNA evidence and deleting his social media accounts.

He is charged with two counts of first-degree intentional homicide and one count of kidnapping. Authorities have not determined a motive for his crimes.