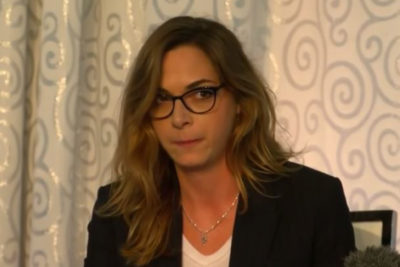 Defense Distributed CEO and 3D-printed gun pioneer Cody Wilson has resigned as head of the company he founded to “focus on personal legal affairs,” according to his replacement, Paloma Heindorff. Wilson stepped down amid allegations he had sex with a minor last month at a hotel in Austin, TX.

Heindorff, who has worked for Defense Distributed for the last three years as Director of Development and Vice President of Operations, said she’s still confident the company can continue to thrive even after their figurehead’s departure.

“I am extremely proud to say that over the past few days the entire team at Defense Distributed has recommitted to the sharing and publication of CAD and 3D printed files,” Heindorff said at a press conference this morning. “This resilience I truly believe to be not only characteristic of our company as a whole, but also the ideas that we have worked so hard to promote.”

Wilson tendered his resignation on Friday, she said, and “his role at the company has been concluded.” She refused repeatedly to answer questions relating to the sexual misconduct allegations, pointing reporters to his personal legal team.

Defense Distributed has continued to receive and ship orders of CAD and 3D-printed gun files, Heindorff said. They’ve received 3,000 orders so far, and they haven’t seen a drop off in sales since the news came out about the allegations against Wilson.

Heindorff acknowledged that Wilson was “an incredibly powerful figurehead,” but she also expressed optimism about her team of 20 employees and contractors.

“I cannot be more proud of our team right now. We didn’t miss a beat. No one blinked. No one has missed a day at work. We’ve all come in. We’re still shipping. And we have no intention of stopping.”

Hendorff previously worked with creatives in New York but moved to Austin specifically to work with Defense Distributed.

“I found it to be the most elegant and effective activism that I’ve seen performed, and I wanted to be a part of that,” she said. “It’s just so beautiful, isn’t it? To exercise one’s rights like that, and do so in a way that pushed authorities to allow you to. I think too often people are perturbed by threats, and I just found it incredible that this company persisted.”

As to her commitment to the First and Second Amendments, she said neither her nor her company’s stance has changed.

“We believe that people have the right to have these files,” she said. “We believe in our right to be able to publish them. I believe very strongly in the First and Second Amendment causes in this case. That’s where I stand. The same as I did a week ago.”

Defense Distributed has been embroiled in a legal battle against state attorneys general in several states and was most recently ordered by a federal judge to remove the CAD and 3D-printer files the company had made available for free online. Defense Distributed worked around the order by offering the files via mailed flash drives at whatever price the customer named.

Wilson was arrested in Taiwan on Friday and extradited to the United States, where he posted a $150,000 bond in Houston. If convicted, he faces up to 20 years in prison.

Next post: Exclusive: Interview with Staunch Gun-Control Advocate Ladd Everitt from One Pulse for America