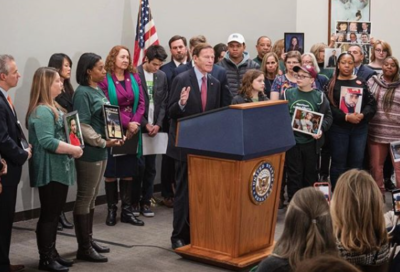 U.S. Sens. Richard Blumenthal (D-CT) and Chris Murphy (D-CT), announced last Friday at a press conference that they are co-sponsoring new federal legislation that would mandate how firearms should be stored by owners.

Under the proposed law, gun owners are required to comply with federal standards for securing their firearms.  If they fail to comply, they would face a $500 penalty or forfeiture of their firearms.  If an injury or death is involved, the gun owner could be charged with a class D felony which could result in a federal prison sentence of up to 10 years and a fine of up to $250,000.

“That’s the purpose of this federal law,” stated Blumenthal, “to hold accountable any firearms owner who fails to safely store or secure their firearms, to prevent access from minors or from others who are dangerous, convicted of crimes, and make our communities safer.”

During Friday’s press conference, Sen. Blumenthal explained that the bill would be modeled after a new measure introduced by state Rep. Sean Scanlon (D) which is designed to strengthen Connecticut’s existing gun storage statute.

Currently, state law requires loaded firearms to be secured if a minor (defined as a person under the age of 16 years), a prohibited person, or a person who poses a risk of imminent personal injury to himself or others is present.  The updated version would require all firearms, loaded and unloaded, to be secured.  It also changes the definition of a minor to any person age 18 years or younger.

The proposed state legislation is referred to as “Ethan’s Law.”  It is named after a 15-year-old boy named Ethan Song who died from a self-inflicted gunshot wound in January 2018 when he gained access to an unsecured .357 magnum handgun and ammunition while visiting a friend’s house.  The senators’ press conference was given on the day before what would have been Ethan’s 16th birthday.

Ethan’s mother, Kristin Song was also present and spoke at the press conference.  She said that if guns are safely stored it would reduce gun violence in the United States dramatically.

“Here is the good news, technology has made it possible to keep firearms out of inappropriate hands and permitting quick access to your firearm in the event that you need to protect your loved ones or your home — the safes can be opened in a matter of seconds,” Song said.

Kristen and Michael Song, Ethan’s parents, have brought a civil lawsuit against the owner of the .357 magnum handgun that Ethan used to accidentally end his life last year.

Sen. Blumenthal called upon the National Rifle Association to support the proposed legislation.

The NRA has long been a proponent of gun safety and education, but has cautioned against anti-gun politicians using safe storage laws as a “tool for disarming the American public.”

The federal version of “Ethan’s Law” has been designated “S.193.” On Jan. 18th it was introduced in the Senate, read twice and then referred to the Committee on the Judiciary. The actual text of the proposed bill has not yet been received by the Library of Congress at the time of the publication of this article.

Next post: Own the Most Affordable Belt-Fed AR Upper in the World – SHOT Show 2019