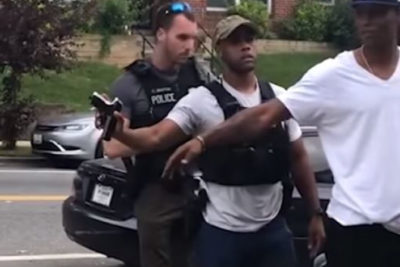 Few police departments are better at confiscating illegal guns than Washington, D.C.’s Metropolitan Police Department, according to a new report from NPR. But that aggressive gun-confiscation policy hasn’t done anything to curb the ballooning homicide rate in the nation’s capital, which has risen over 40 percent since last year.

Every American police department encourages its officers to be on the lookout for illegal guns, but D.C. has instituted a program that tasks teams of officers in unmarked cars to scour the streets in search of people who might be carrying illegal firearms.

D.C. officers frequently stop pedestrians and pull cars over when they observe an individual looking nervous when they drive past. They’ve also stopped and searched people for crossing the street, running away, wearing heavy coats in warm weather, or holding their pants in a certain way while walking, according to NRP.

The practice has become so ubiquitous that residents have started calling officers who look for people carrying illegal weapons the “jump-outs.”

“We are out here to get illegal guns. It’s not to violate anyone’s rights or have a community uproar. That’s not our intent,” Assistant D.C. Police Chief Robert Contee told the news service. “What I know is that that firearm that’s been recovered off that street, it won’t take the life of somebody out here.”

In terms of gun confiscation, the policy has been successful. D.C. police confiscated 1,870 guns in 2016, more than five times as many illegal guns per capita as did the New York City Police Department, and nearly twice that of the Los Angeles Police, according to police data. In 2017, they confiscated even more—2,191.

So, do fewer guns “on the street” result in less crime? Not so much. While the homicide rate dropped between 2015 and 2017, so far this year there have been more homicides than the entirety of last year and the same number as in 2016 (135). That number is driven largely by firearm-related crime, which accounted for 77 percent of homicides in 2016.

Gun crime, not surprisingly, is driven more by the people who pull the trigger. This is evidenced by the ineffectiveness of D.C.’s gun confiscation policy as well as the effectiveness of programs that target the small percentage of individuals who are responsible for much of the gun-related crime in any particular city.

These programs have proven to be remarkably effective at reducing gun-related violence rates in the most dangerous American cities, and their success is due largely to their emphasis on the people who commit crime rather than the tools they choose to use.

Next post: Don’t Vote for the Gun-Grabber! Use NSSF’s Congressional Scorecard for Midterms