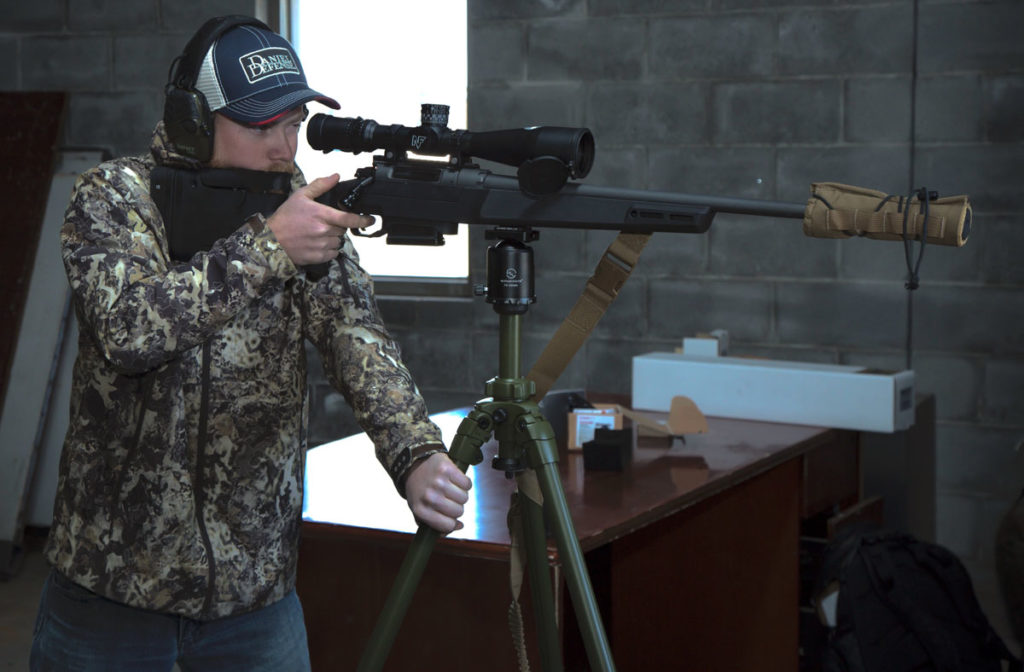 The Delta 5 is one of the most versatile factory rifles on the market at the moment. It was designed to excel in niches such as long-range shooting, precision rifle competitions, hunting, and tactical purposes to name a couple.

Daniel Defense is well known for producing the highest quality AR parts and complete systems in the industry. With this impressive background, about two years ago they decided to jump into the bolt action rifle market. After extensive in-house testing, redesigning and secret-keeping, the Delta 5 is finally here and is truly refined as can be expected from such a process. With a goal in mind to make this gun the one to satisfy all needs, Daniel Defense installed the highest quality components that they could make while trying to maintain an affordable cost that everyone could reach. Because of this goal, the Delta 5 fills the niche of a hunting rifle, long range target rifle, PRS style competition rifle and a family heirloom with absolute compatibility. And of course, Daniel Defense’s satisfaction guarantee gives any potential buyer the security of knowing they will love their gun, or it can be returned with no hassle for a full refund. 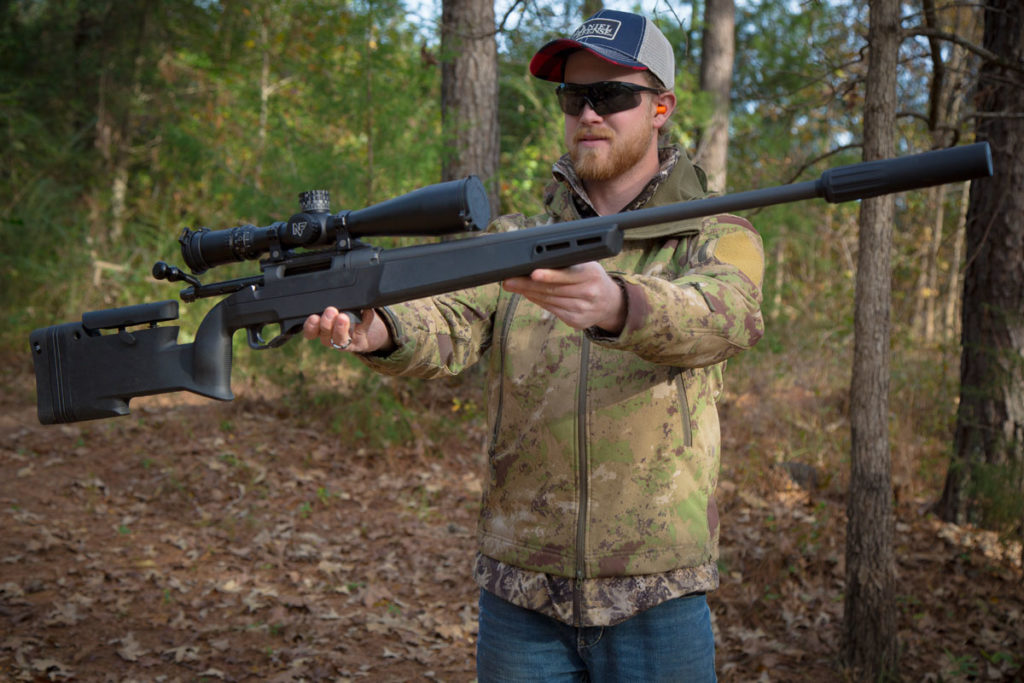 As can be seen, the Delta 5 is not a copy of anything that is currently existing. Instead, Daniel Defense’s engineers designed this gun from the ground up using the most cutting-edge features.

The Delta 5 is packed with all sorts of high-end features that I want to speed run through, but the most impressive to me is the ability of this rifle to be completely disassembled and reassembled by the user. This includes the removal of the barrel from the action and reinstallation with nothing but a flat surface to set the gun on, barrel nut wrench and hex wrench which will be included in the rifle package upon purchase.

This means that barrel swaps can be done by anybody that can use simple tools, with the precision and safety of a well-qualified gunsmith due to Daniel Defense’s ingenious design. The enabling design feature for this easy barrel swapping is a barrel extension which is similar to those on an AR (imagine that!). This extension is precision ground to 0.0002” in length which eliminates the need for go-gauges and other typical barrel mounting tools. Finally, this extension can be purchased from Daniel Defense which suggests the ability to mount aftermarket barrels and opens this gun up to near unlimited caliber possibilities to be determined by the end user.

The second feature that I find rather unique was the three lug, floating bolt head. This is not the first action to have this design, but it is the first with a reasonable price tag. The reason this is an improvement from the standard is multifaceted, but includes yielding a shorter bolt throw (60 degrees), the ability to swap out bolt faces to shoot different diameter cartridges, and it adds the ability of the bolt head to shift ever so slightly to ensure a perfectly square lock up against the action lugs. These are not effects that were discovered after the fact, but designed with all meticulousness by Daniel Defense’s Engineers. 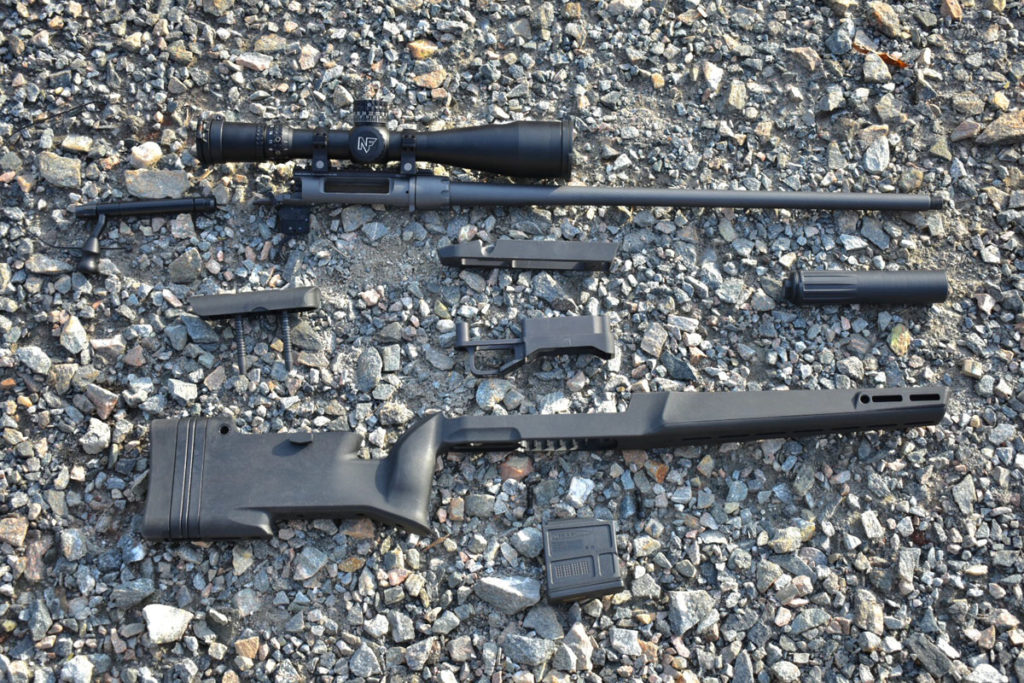 A deeper look into the Delta 5 shows even more of this attention to detail that was put into the designing of this rifle. Note how the action sits in the mini chassis which is spaced with aluminum pillars from the bottom metal, keeping things repeatable and precise.

The ability to swap barrels with such ease coupled with the interchangeable floating bolt head makes this rifle a switch barrel platform. This means that you only need one gun and a few barrels in order to shoot a range of calibers and adapt this rifle to special purposes. This, in my mind, puts this rifle system in competition with Accuracy International and Proof Research’s switch barrel systems to name a couple. Undoubtedly, the Delta 5 will be a smash hit here due to its much more affordable price tag, high quality, and level of precision.

The Delta 5 also has an over-engineered scope rail. Instead of simply bolting on with a handful of bolts, it has larger bolts (#10-32) to keep from stripping them out upon installation. Also, it straddles the recoil lug on the action which acts as a wedge when it is bolted down, further solidifying it in place. The rail is not indexed with the screws holding it on, but with a pin on the action which keeps it straight and true. Finally, to give the shooter more internal adjustment in the optic, the scope rail has a 20 MOA slant on it. This Delta 5 was designed with long range shooting in mind.

The barrel on the Delta 5 is even redesigned. Instead of being button rifled or cut rifled as all other barrels are, the Delta 5 has been cold hammer forged to profile, including the chamber. This is huge because when metal is worked, it is stress hardened. Imagine these stresses as vector arrows pointing from the outside of the barrel toward the bore and the inside of the bore toward the outside of the barrel. When other barrel manufacturers then cut the hammer forged barrels to profile with a lathe, they remove these external stresses that point in toward the bore, creating an imbalance and a larger likelihood of the barrel warping upon temperature changes and such. The Delta 5’s barrel also has a slight taper to the bore, getting narrower toward the muzzle. This aids in the gas seal and adds to the velocity of the bullet by the time it leaves the muzzle when compared to a standard barrel. 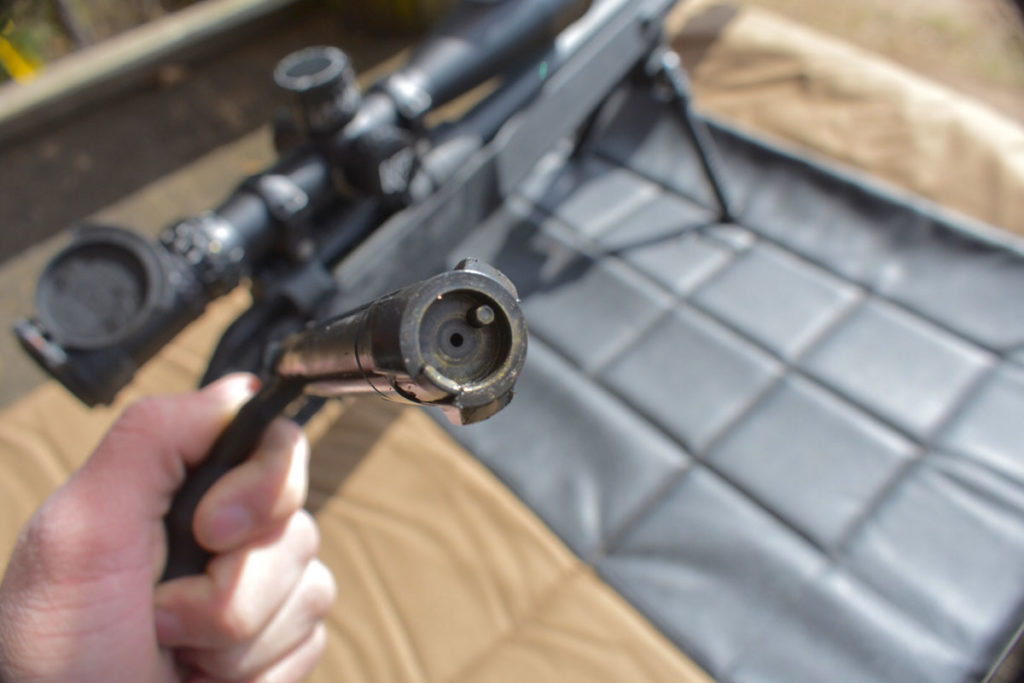 Two features that stuck out to me the most were the 3 lugged, floating bolt face and the barrel nut/extension system. In my mind, these are the most unique features of this rifle for its price range. 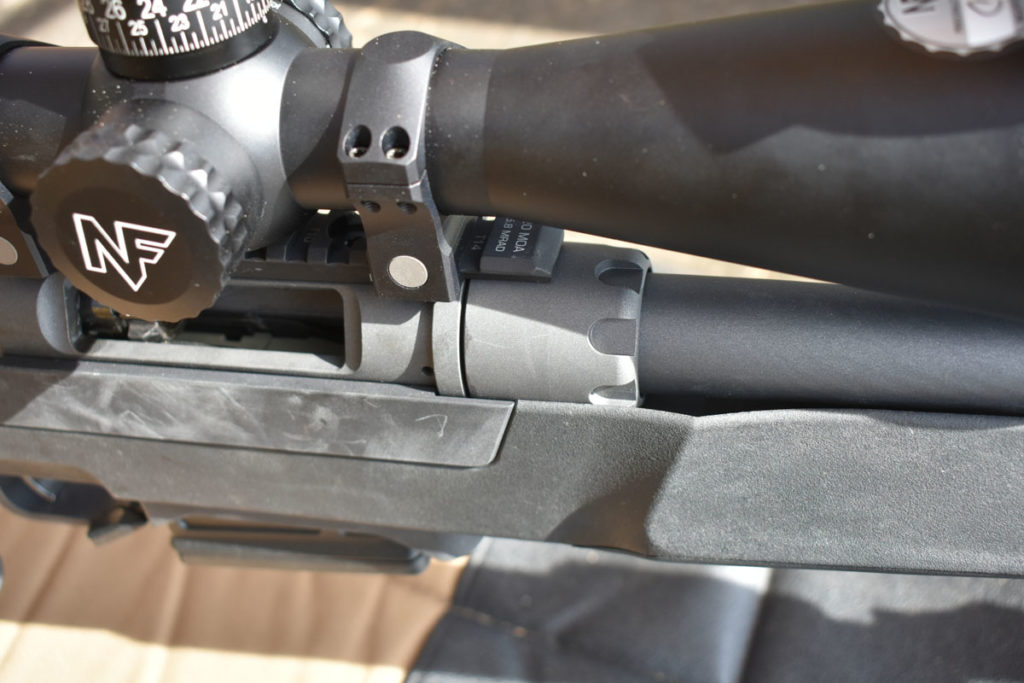 A rifle can be designed with all the desirable bells and whistles, but if it is aimed at the precision rifle niche it will fall flat if it lacks said precision. After my testing, I am confident to say that Daniel Defense did not fail to meet an adequate level of precision with this new rifle. I shot the rifle suppressed (with the Daniel Defense Wave suppressor) and unsuppressed and saw comparable results. And in both scenarios, I was seeing a repeatable ~0.5 MOA out of the Delta 5 even when it was “suppressor-smoking hot” which was very impressive. Because of this rifle’s high level of precision, I found myself really challenging my own skills while behind this rifle. 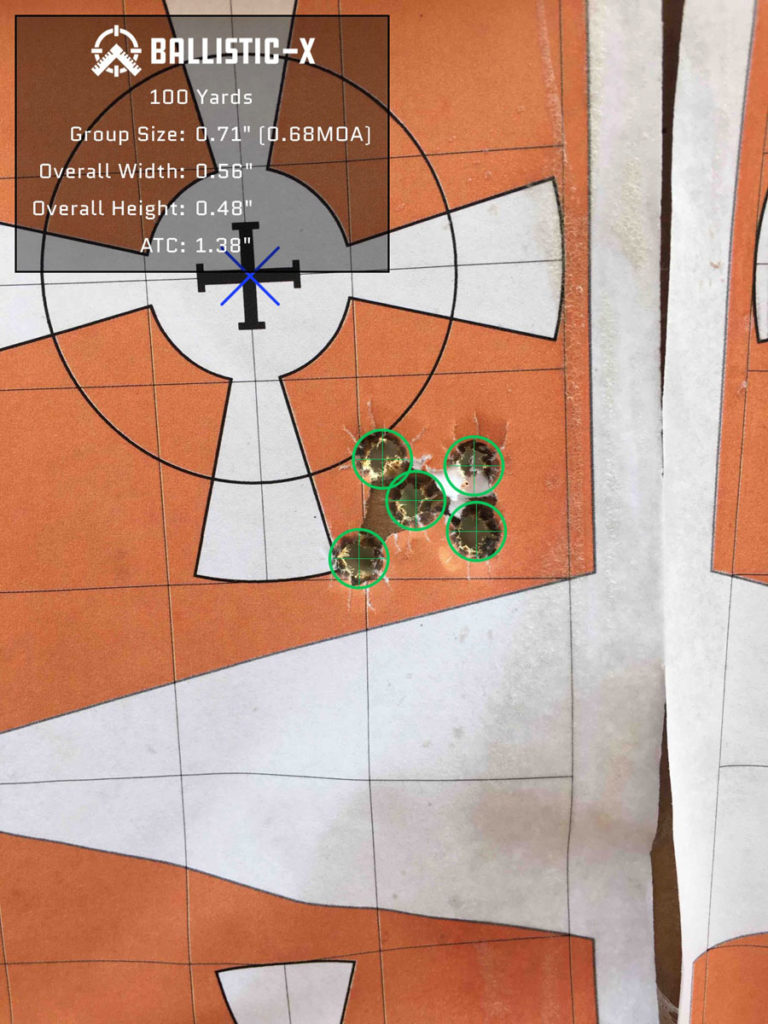 The Delta 5 was able to keep groups around 0.5 MOA all day long no matter the temperature of the barrel and even without waiting for the barrel to cool between strings of 20 and 30 rounds. The smallest group being near 0.2 MOA and the larger being around 0.75 MOA. 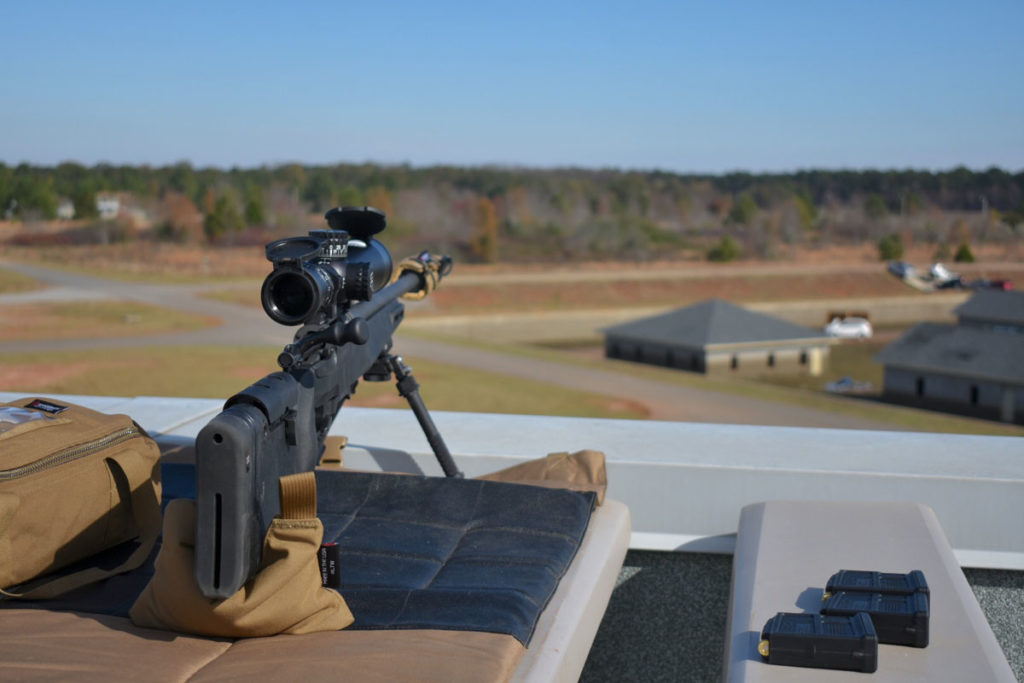 When is it Available?

The Delta 5 should be available for purchase as soon as it is announced, true to the Daniel Defense way. This means that you can currently order a Delta 5 of your own and it will be shipping out to your FFL within a few days. 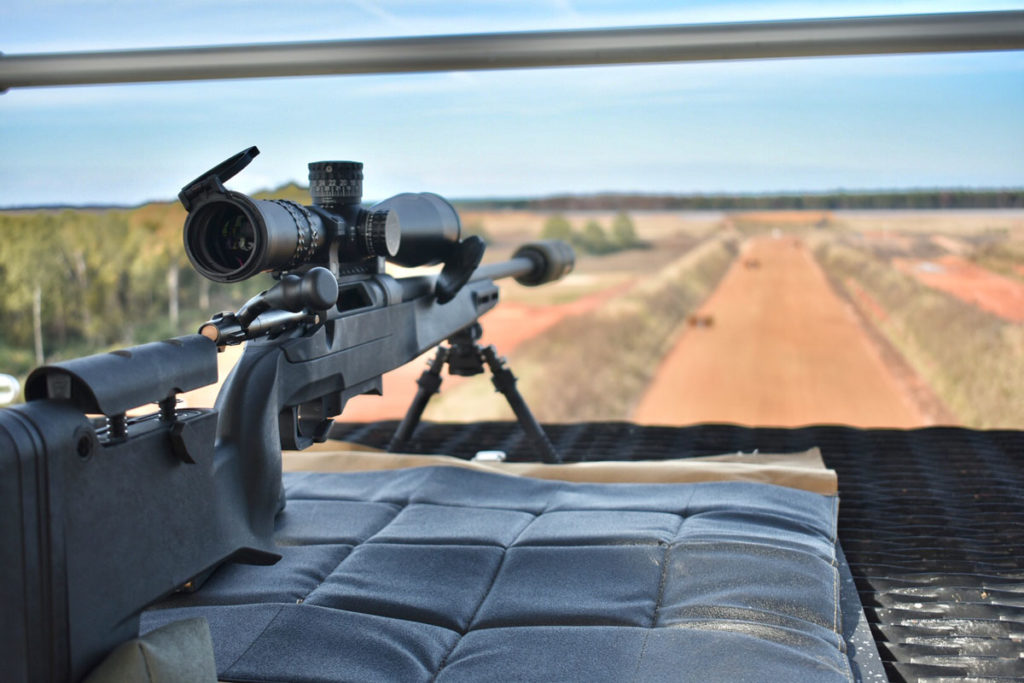 The versatility of the Delta 5 is incredible. Here, I am shooting from an elevated position at targets that range from 200 yards to 800 yards.

The Delta 5 by Daniel Defense is a home run. It incorporates all of the high-quality parts that you should expect in a custom rifle while maintaining a low price tag and availability of a factory rifle. The rifle itself is fully adjustable to fit any sized shooter and feels natural in the hands due to Daniel Defense’s focus on ergonomics and functionality. If someone was looking for a precision rifle but did not want to put the effort and money into a fully custom gun, I would definitely recommend the Delta 5 to this person with full confidence in the gun. This is a gun that I would personally like to own because I was able to build extreme confidence in it in the short while that I was able to test it. The current chambering choices of this rifle are good ones because they are versatile and can be used in most any sport or scenario much as the gun itself is designed to as well. Just in case you have the question, “is this gun high quality?” I will answer you by saying, “it is of the highest.” 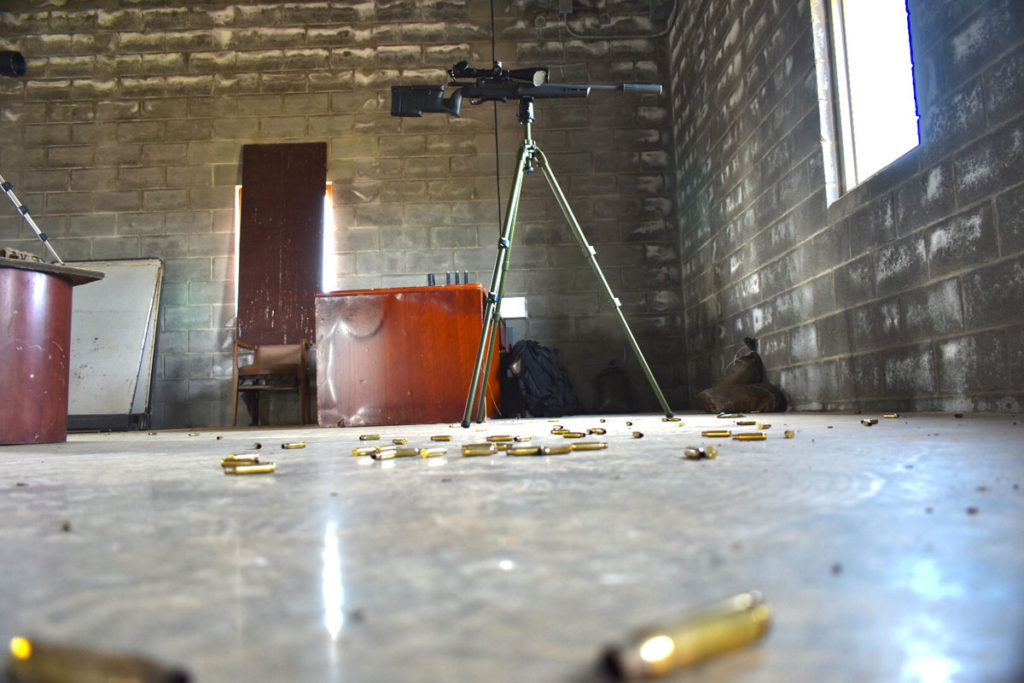 As can be extrapolated here, I ran the Delta 5 HARD. Accuracy never wavered and the gun kept me banging steel.