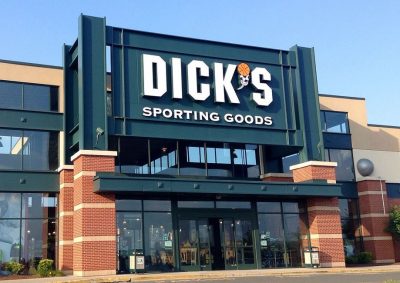 Dick’s Sporting Goods is starting to feel the effects of its anti-gun policies. (Photo: Mike Mozart/YouTube)

Earlier this year financial analysts hoped Dick’s Sporting Goods could continue to post strong sales numbers even after imposing a slate of anti-gun policies. Today that projection sounds more like wishful thinking than anything else.

Dick’s shares fell by as much as 10 percent today after the company announced a 1.9 percent drop in same-store sales, more than twice as large as analysts’ average estimate of a 0.62 percent dip. Dick’s net sales rose by nearly 1 percent to $2.18 billion, but that mark also fell below the average Wall Street estimate of $2.24 billion.

Edward Stack, the company’s CEO and Virtue Signaler in Chief, blamed a decline in their hunting department as well as new policies by Under Armour for the same-store sales numbers.

“Sales were impacted by the strategic decisions we made regarding the slow growth, low margin hunt and electronics businesses, which accounted for nearly half of our comp decline,” Stack said in a press release. “In addition, we experienced continued significant declines in Under Armour sales as a result of their decision to expand distribution.”

By “hunt,” of course, Stack means, “firearms.” He’s also referencing Under Armour’s decision to start selling its products in low-price outlets like Kohl’s, which makes it more difficult for Dick’s to sell at its traditionally higher prices.

Stack nonetheless remained confident in the future of the company.

“We are very confident our sales trajectory will improve next year as these headwinds are expected to subside,” he concluded.

Still, the company continues to be concerned that its anti-gun policies will affect sales. Buried in the earnings report, they list “negative reactions to our policies related to the sale of firearms and accessories” as one of the factors that might throw a wrench in their optimistic future projections.

Sportsman’s Warehouse, by contrast, posted strong second-quarter numbers, buoyed largely by a massive uptick in gun sales. The company saw an 8.3 percent uptick in their firearms category, which they attributed to “certain decisions” by their “competitors.”

Dick’s announced after the Valentine’s Day massacre at a high school in Parkland, Florida, that it would no longer sell AR-15 style rifles and 30-round magazines. It also no longer sells firearms to customers under the age of 21.

Previous post: Vietnam Veteran Who Was Shot by Police While Defending his Grandson Given a Hero’s Burial