Don’t Slip Up: Stop These Common Errors Before They Start 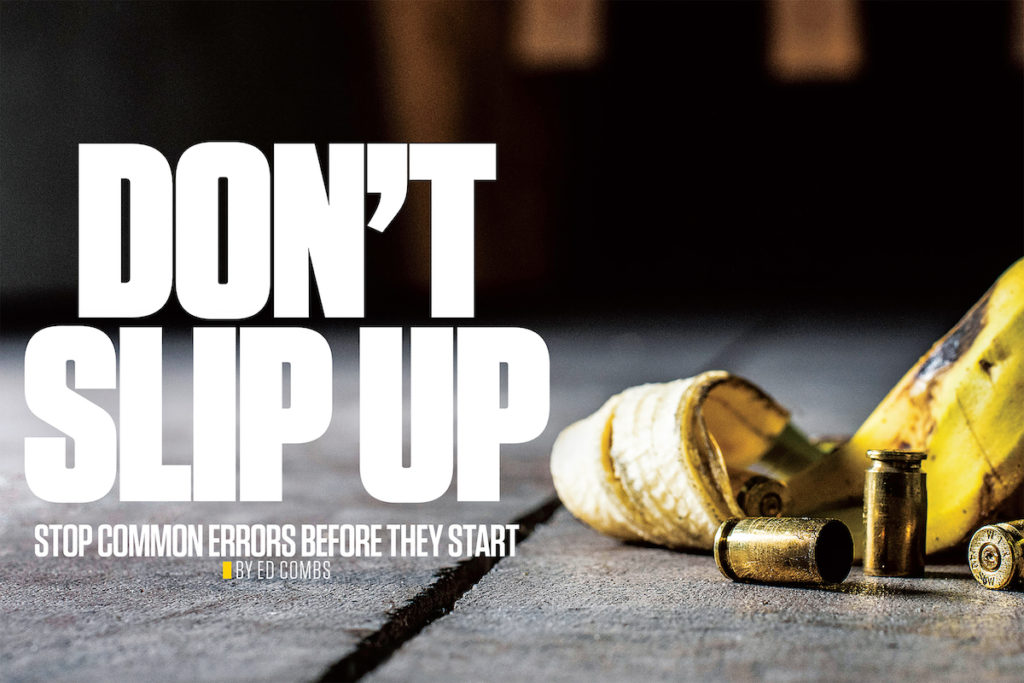 Editor’s Note: The following is a syndicated article by author Ed Combs that first appeared in USCCA’s Concealed Carry Magazine Volume 13, Issue 3, October 2016 under the title, “Don’t Slip Up.”

One of the most common laments I hear in life is, “Man, I wish someone had told me that when I started.”

It’s the closest thing to a universal axiom I’ve ever encountered. Regardless of activity or situation, there’s always something you wish someone had told you before you had to learn it the hard way. Sometimes, that “hard way” results in simple embarrassment or the loss of a few bucks. When handling firearms, mistakes can have a much higher cost.

When individuals make the decision to learn about concealed carry, few of them do so fundamentally misunderstanding or underestimating the gravity of what they’re doing. They’re serious about their decision, but there’s also a chance they’ve never even touched a firearm before you hand them one. There’s a chance that they’ve been handling firearms for decades but were raised with what, by today’s standards, is extremely poor gun-handling protocol. Either way, they’re going to have to learn how to handle firearms if they’re going to be able to safely and properly train.

Unfortunately, more than a few experienced shooters enjoy lording their experience over others, especially rank beginners. They see that wealth of experience and their ability to make others feel small with it as a reward for their many years of hard knocks (usually at the hands of others like what they have become) rather than as a resource to be shared with anyone interested enough to ask. This is what used to be called “Gun Shop Guy Syndrome:” A knowledgeable individual is intentionally and unapologetically rude and dismissive of anyone who knows less than he or she does, often to the point of humiliating the “noob” and losing what could have been a lifelong customer. Even worse, jerks like that weren’t just driving away business from their own stores; often, they were souring potential new shooters and Second Amendment advocates altogether.

We here at the USCCA demand better than that from all responsibly armed Americans. In the interest of helping every new shooter (and novice instructor) advance as quickly and painlessly as possible, we’ll investigate the most common new-shooter errors and the easiest ways to head them off before they even happen.

“We were on our honeymoon, and we’d gone out to a ranch in Montana to ride for two weeks. Toward the end of the trip, we’d all gotten to know the wranglers pretty well and a lot of the couples were asking to pose for pictures with them. One couple from Germany was standing next to one of the wranglers I’d gotten to know a bit and he’d slung his gun belt around the waist of the husband, who immediately drew the revolver, pointed it at the wrangler, then pointed it at his wife and then pointed it at the woman who was going to take their picture. The entire time, his finger was on the trigger. The wrangler just smiled and reached over and grabbed the barrel and told him to keep it pointed at the ground. When they were all done and walking away, he looked at me and humorlessly said, ‘That’s why I’ve never handed a guest a loaded gun. It seems like that’s always the first thing they do’.”

This was easily the most telling of any anecdotes I collected for this report. In a way, it shouldn’t be all that surprising.

When someone hands you a guitar, even (or possibly especially) if you don’t play the guitar, you’re tempted to hold it by the neck in your non-dominant hand with the body of the guitar across your lap or against your waist with your dominant hand in a position to strum the strings. You’ve been socialized by images to do so; it will come naturally even though you might have never even touched a guitar.

For a lot of individuals, the same is true with firearms. As soon as their hand has a hold on the grip, their finger will immediately be on that trigger — and they might even press it. This is why it is imperative that you never hand a loaded gun to anyone other than a shooter on a firing line; and why you absolutely must explain to a new shooter that when he accepts a handgun from you, he is to place his trigger finger on the side of the gun’s frame.

This is where a good number of instructors slip up: Don’t simply tell your student to “keep his finger off of the trigger.” That isn’t really telling him anything other than not to do something, which is a difficult and confusing task for some, especially when they’re holding a tool that is purpose-designed to be comfortable to hold with your finger on the trigger. Rather than telling him what he shouldn’t do, tell him what he should do: Place his trigger finger on the side of the frame. Then physically show him exactly what you mean by that. Doing so will yield far better results than the alternative.

“When a hot casing ejected from his gun and went down the back of his shirt, he passed the gun to his support hand, reached into his collar with his strong hand and turned about 145 degrees, which meant he was pointing his loaded gun directly at me and Sandy where we stood behind the firing line. It was one of the scariest moments of my life.”

This is the error that carries the highest risk of the wrong person getting shot. You’ve managed to keep your new shooter from immediately placing his finger on the trigger and he’s advanced enough to be ready for the firing line, but he gets excited and begins to turn his body, resulting in the muzzle of his firearm crossing or “sweeping” anything other than the backstop. It’s a tense situation and, if handled improperly, can be extremely embarrassing for the student and extremely dangerous for everyone else.

For all of you new instructors out there, as you gain experience, you will get better and better at spotting the students who will be the most likely to do something like this. After you have them spotted, they’ll be the students who will require the closest supervision, but the fact remains that actual one-on-one instruction is uncommon. Unless you can remain directly behind any student who is holding a firearm, you’ll need to do everything else in your power to stack the deck against lapses in muzzle discipline.

First, you need to maximize your surroundings. If you are shooting at a range that has actual physical shooting lanes that are separated by physical barriers, set up and keep your students as far forward in the shooting lane as is safe. Use the shooting lane partitions the same way that clay shooting instructors use the “shooting windows” on their ranges: The muzzle of the shotgun never leaves the wooden rectangle in front of the shooter, and therefore the student never sweeps anyone.

Similar to telling the students exactly where to put their trigger fingers, you need to tell the students exactly where to point their guns. Don’t just tell them to “keep them downrange” or to “not point them at anyone.” You need to explicitly and specifically tell new shooters that they need to keep their guns pointed at the backstop at all times.

When helping new shooters, the most important thing you can instruct them to do is ask you questions. They don’t know what to do, and there’s no shame in that. No one can expect them to know proper gun handling and range protocol if no one has ever taught them.

Before you hand a new shooter a gun, loaded or unloaded, you need to have already told her exactly what you want her to do while demonstrating exactly how she is to go about doing it. Remember, unless you learn otherwise, you’ll need to operate under the assumption that she doesn’t know a single thing about how to safely handle a firearm. After you’ve established where the shooter actually stands on the knowledge continuum, it’s really the safest way to proceed for all involved.

Next post: Breaking: SCOTUS to Decide 2A Case for the First Time in Almost a Decade