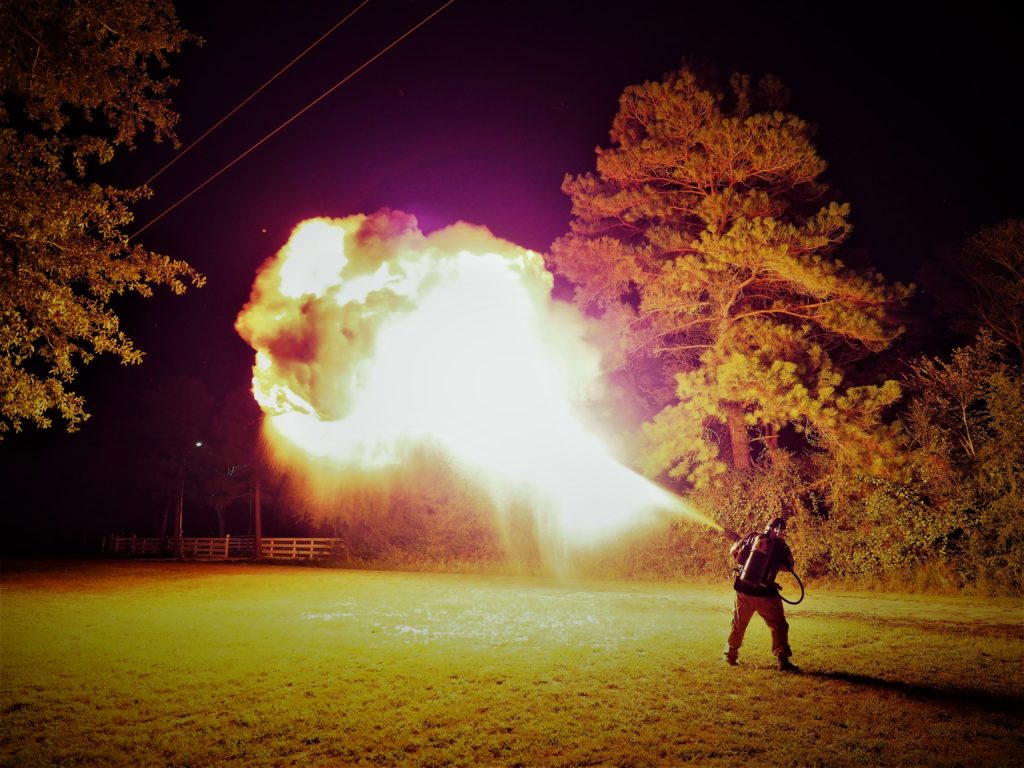 Lighting up the night with the XL-18

Packing a 3-gallon capacity gas tank, the Throwflame XL-18 is capable of spewing flames at over 100 feet! This is definitely not a toy. It is the most powerful and expensive flamethrower available. The XL-18 retails right around $3,199 but if you want the best, this is it. It’s also the only one with a few practical applications. 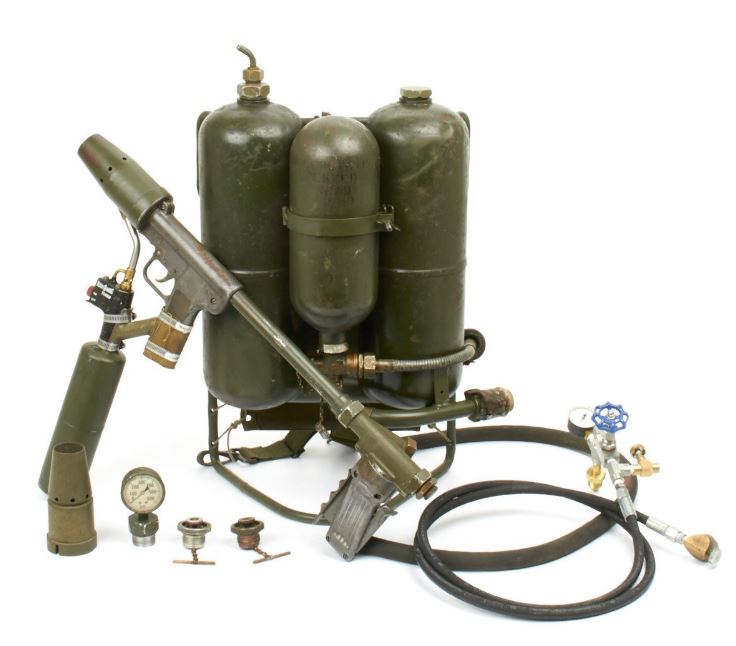 A flamethrower is a device that shoots pressurized fuel ignited by a pilot flame. They were first used in WWI to flush people out of trenches. During WWII the United States Army used the M-1 and M-2 flamethrowers for clearing bunkers and machine gun nests. Flamethrowers in the United States are completely unregulated and legal to own in every state, except California and Maryland (I’m not an attorney so don’t quote me on that.  But that’s my understanding of the law).

Obviously with something as powerful as the XL-18 you can get into serious legal trouble discharging in a populated area. Throwflame has been in business since 2014 and they are based out of Cleveland, OH. Before the XL-18 they had the X-15 which retails for $1,600 and has a maximum range of 50 ft. 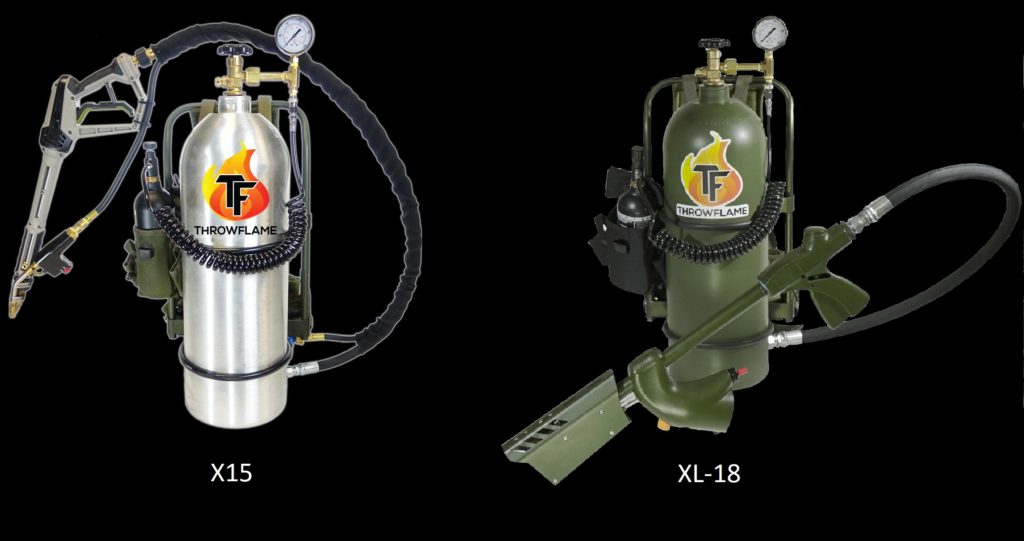 There are a few practical uses for it other than being the Rockstar at the family BBQ on the Fourth of July. Law enforcement and military units in South American and Asian countries use them for burning drug production sites. Farmers use them regularly for starting controlled burns and land management in agricultural areas. Some New Englanders claim to use them for ice and snow removal from driveways and sidewalks.

Lots of you may be wondering how safe it is to strap a pressurized fuel system to your back, but the XL-18 has proven to be safe during our testing. The system is designed using CO2, which acts as a fire suppression system and keeps the flame from moving back into the gun. As the fuel is used up, the CO2 occupies the empty space in the gas tank making it impossible for a lit flame to enter the tank. It is also a closed loop system meaning atmospheric air cannot get into the system. Old WWII flamethrowers used nitrogen to pressurize the tanks, but CO2 works better since it liquefies at a lower pressure giving you more output with consistent pressure. There are two regulators in the system, preventing liquid fuel from entering the CO2 tank.

The XL-18 arrived carefully packed with everything we needed. Our XL-18 came with two jugs of napalm and a regulator. They also included 5 CO2 canisters. They usually only come with one canister and no napalm, but I would recommend buying extras and a few gallons of the napalm. They offer different packages that contain different add-ons. 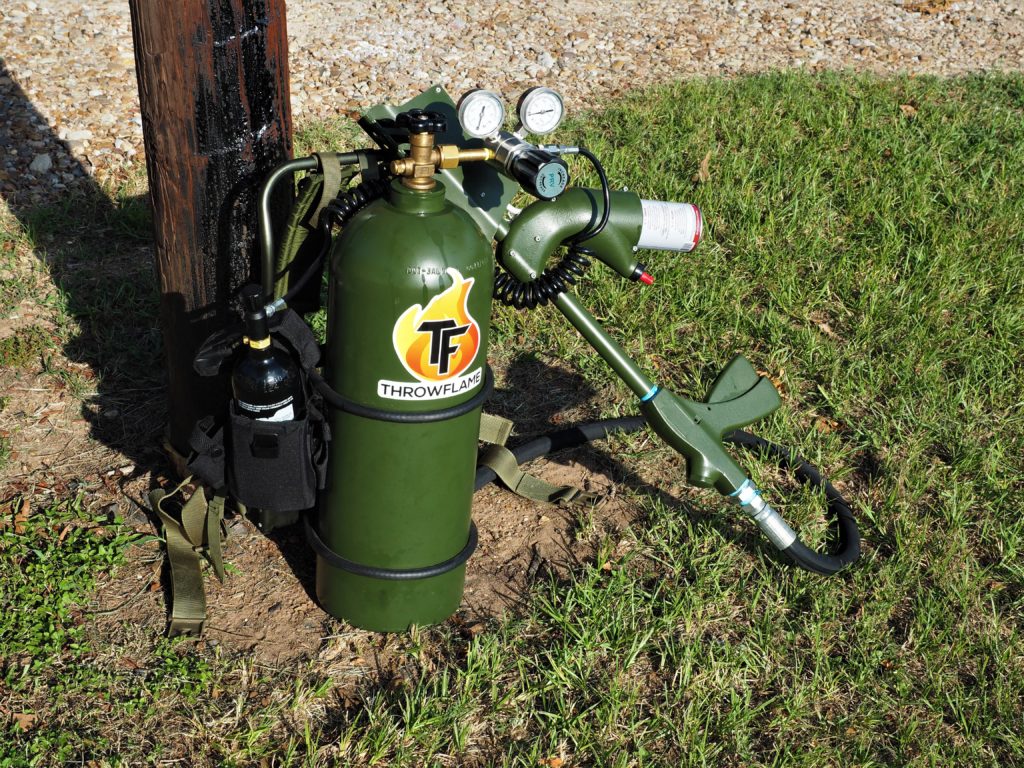 My first thoughts when I picked up the XL-18 is this is absolutely the real deal. Everything is industrial grade and well made. The tank is made from steel and the backpack frame is aluminum tubing. The hand grip, trigger, and fore grip are powder coated 6061-T6 aluminum. The shoulder padding is thick and comfortable to wear for prolonged periods of time. Adjustable waist straps function as they should to secure the unit in place. It distributes the 45 lbs. surprisingly well. The fuel hose going to the spray gun is an industrial strength high-pressure ¾” hose. Each fitting is wrapped in blue Teflon creating a completely sealed, leak-free system. The only thing that I did not like initially was the pilot flame ignition. It is a piezo (BBQ) lighter and for the price of the XL-18 I thought it should have been more robust. The ignition spark it created was a bit weak for the application.

The manual recommends testing it with water first to make sure nothing was damaged in shipping. When I tested with water, I was blown away by how powerful and far the water went. It also has a surprising amount of recoil. I shot it off the canal dock and it sent a stream clear across the canal into the neighbor’s yard on the other side approximately 65 ft. away. Based on this observation, this could also be used as a riot dispersal tool filled with a water-pepper spray mix.

A note on napalm. It is a thickened version of fuel that is more of a gel than a liquid, so when put into a flamethrower the fuel is expelled more like a liquid then an aerosolized gas. This makes the stream hold together tighter and travel further. It also allows a longer burn time. 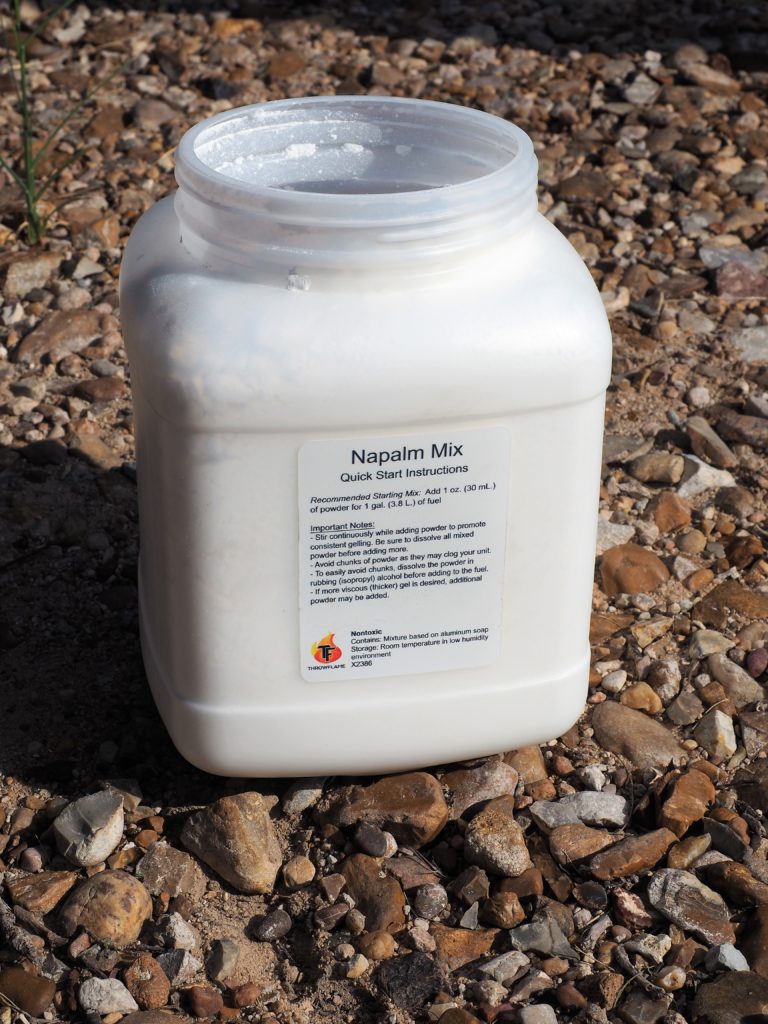 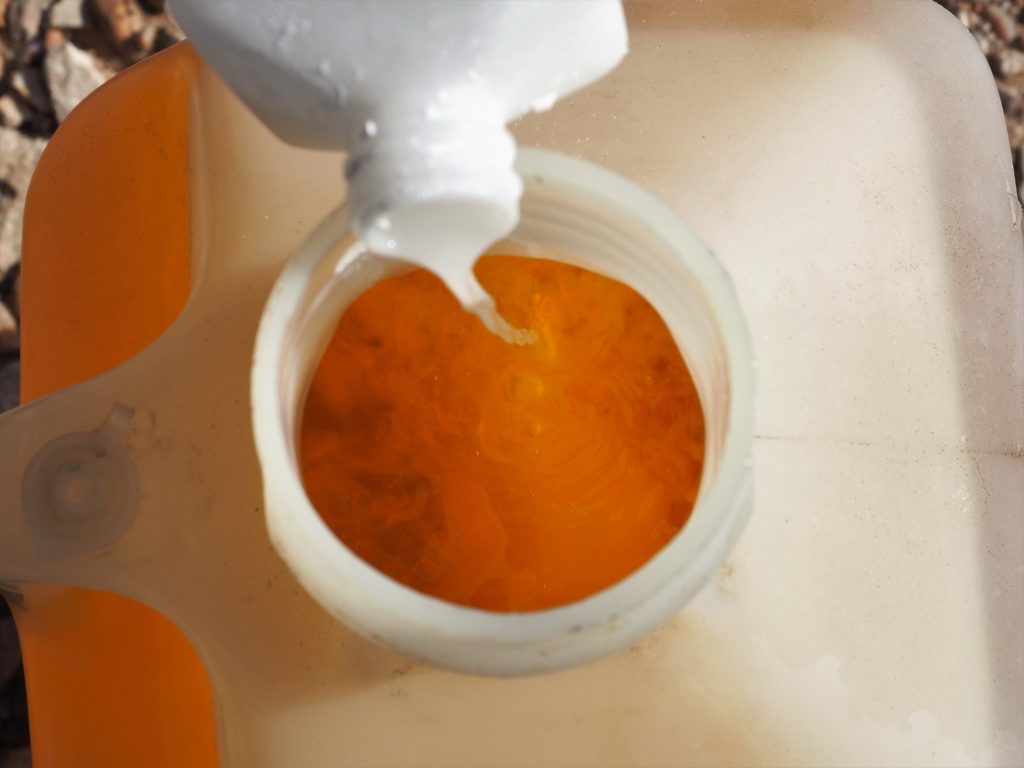 Adding the Napalm solution to the Diesel/Gas mixture.

The directions are vague on what happens when you use different fuel mixtures, but what I found is that most everything worked. Different fuel mixtures change the distance shot, the rate it fired, and how combustible it was. The manual says you should use 80% diesel mixed with 20% gasoline to get the best results with the napalm fuel thickener. The instructions say to mix 1 oz of napalm with every gallon but this did not work. When combined, the napalm powder stuck together into clusters that could not be broken. The instructions also said it could be mixed with alcohol first. Combining alcohol first with the napalm powder was the key. We dissolved one 1 oz of the napalm mixture into 91% isopropyl alcohol. This was then mixed slowly with the diesel/gas mixture. I did three gallons at a time and that would fill the whole tank. We also experimented with 50% diesel and 50% gas and it caused the napalm to burn faster, brighter, and created a wider fire stream. Using pure diesel got the most consistent results but did have the same range as the napalm mixture. The more napalm added to the mixture made the fire stream smaller, but it would go farther. 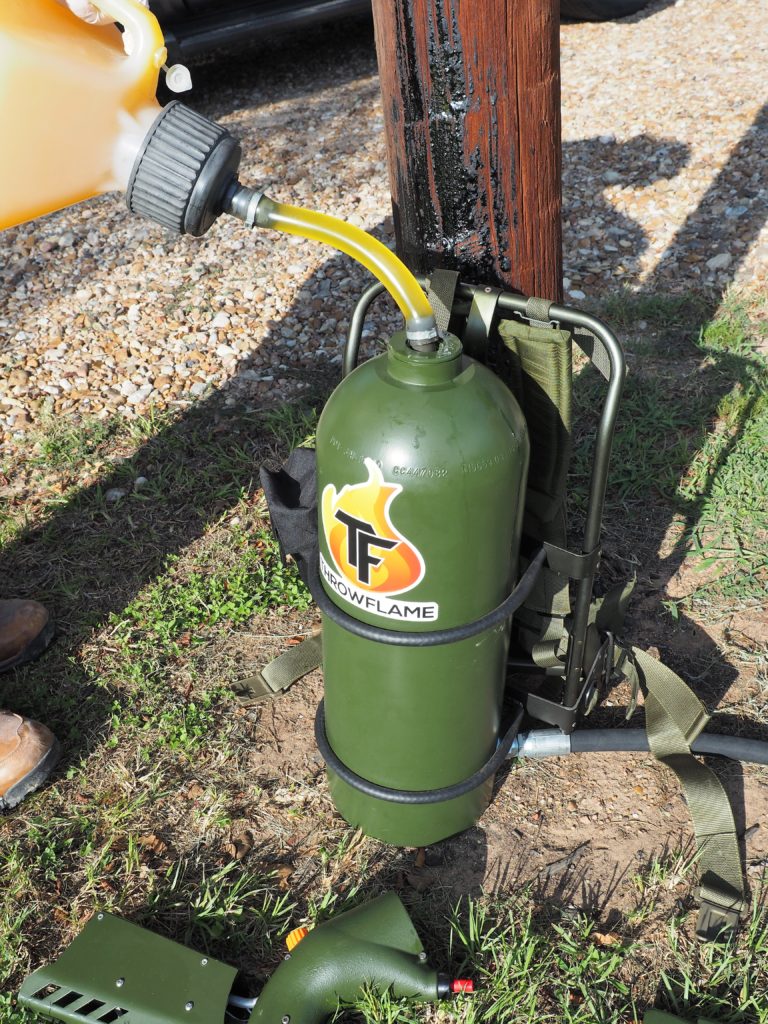 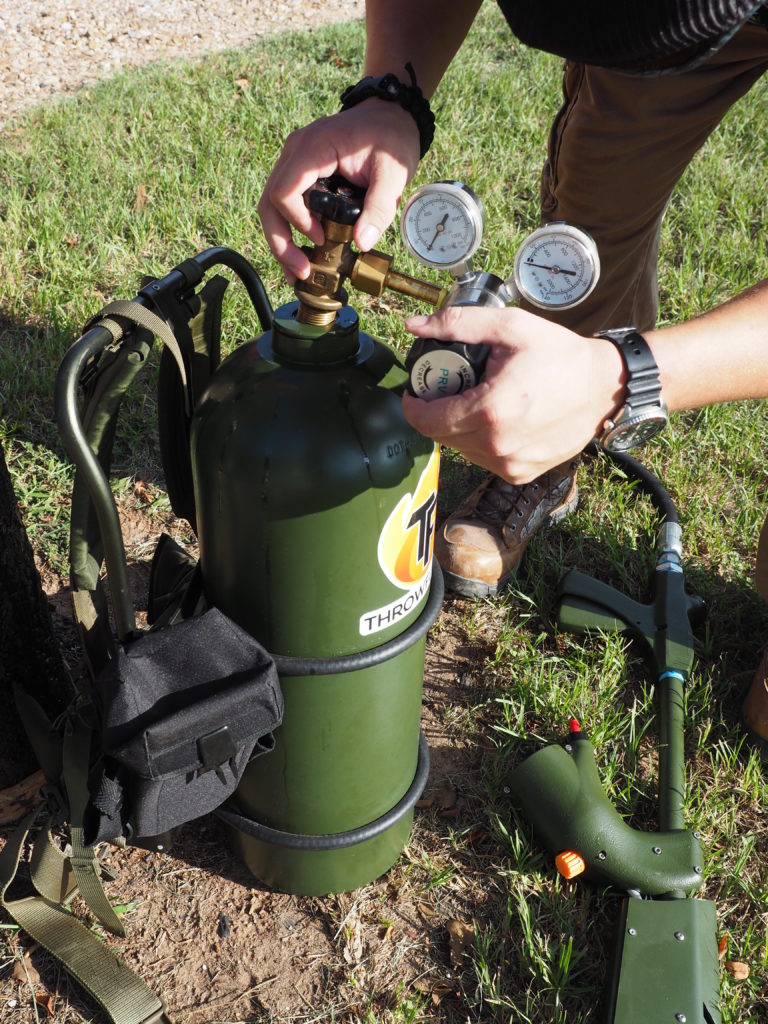 Finally screwing on the regulators so we can pressurize the tank.

Firing it for the first time was an unforgettable experience. It creates flames at a magnitude YouTube videos do not prepare you for. I have never been exposed to anything that hot before. It was blistering and blinding at the same time. You can easily feel the heat 50’ behind the operator. Depending on the fuel mixture and the pressure you could get between 5-15 seconds of shooting per tank. While the excitement doesn’t last long, it is long enough to destroy anything in its path. Note: sandals are not recommended, and double check wind direction before firing.

Throwflame claims the XL-18 shoots 110 feet, which is accurate, but I found that the distance and duration are both dependent on the fuel mixture ratio and pressure settings. Using the 80/20 preferred diesel gasoline napalm mixture I was able to easily set a pallet on fire at 90 feet. The longest duration burns were at a pressure of 250 psi using the 80/20 diesel gasoline napalm mixture. These burns lasted around 10 seconds. I found the optimal pressure setting to be between 250-300 psi. This is also what Throwflame had advised. 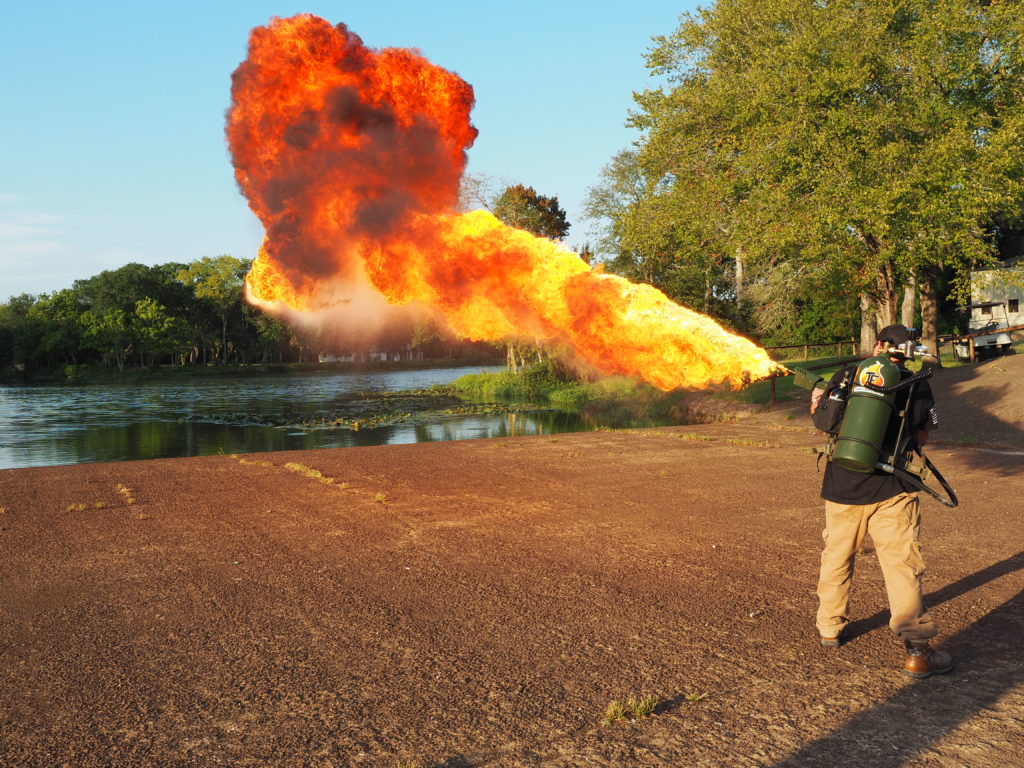 The neighborhood was just as impressed as we were.

The first time we tested it, we were not using the regulator because it did not come attached to the unit and there were no instructions on how to install it. This caused a lot of headaches. Without the CO2 properly regulated the pressure in the whole system was between 800-1000 psi. The high-pressure fuel mixture would extinguish the pilot flame. The shortest duration burns were at a pressure of 800 psi, and this would create a giant monster fireball/mushroom cloud and then extinguish the pilot light. After talking with Throwflame we fixed the problem by installing the regulator and not using it above a pressure of 500 psi. Another problem we experienced when using the XL-18 was the piezo lighter for the pilot torch. If the pressure setting on the butane tank was not turned all the way down, it would not light.

Once we figured out the best setting for the pilot torch it performed consistently. The stream of fire was tight and easy to control versus the fireball originally achieved. This is a one-of-a-kind piece to add to your collection, and a blast to shoot. There are no other commercially available flamethrowers that have even half the power. It is a great tool for land management burns, making your friends jealous, and gaining followers on Instagram.

While you can’t help but smile using the XL-18, the setup requires a lot of planning and logistics. The pilot light butane canisters had to be bought and the CO2 tanks had to be filled in advance. This was a problem for us since we would have to drive into Houston an hour away to get them filled. Mixing the fuel requires consideration and so does transporting it. Not having a truck and putting that many gas cans in your SUV, is a recipe for a bad time. To shoot it 5 times you need 15 gallons of mixed fuel, totaling less than 4 minutes of actual shooting time and at least 3 hours of prep time. It also requires the highest concentration of isopropyl alcohol to mix into the napalm powder. The whole process can quickly turn into an all-day project. But if you are looking for a truly unique piece for your collection and you want something military grade the XL-18 delivers.

Here’s a short compilation video of us having fun with the XL-18:

About the author: Gerhard Maale has a Masters degree in Marine Resource Management and has been published in several well regarded scientific journals. He worked in the Bering Sea on fishing vessels A as a biologist. After returning to Texas, he worked in the firearms industry for a few years. He now owns a K-9 training company and breeds mastiffs. Instagram @lonestarmastiffs He has been hunting and fishing his whole life and has become a reputable shark fisherman in Texas.

Next post: Gear Pours in for Disabled Arkansas 8-Year-Old Whose Hunting Equipment was Stolen