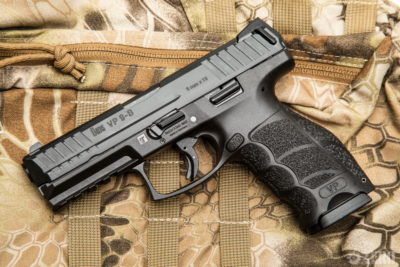 Heckler & Koch has adapted their very popular VP9 pistol directly for the American market with the new VP9-B. The updated B model has a reversible push-button magazine release along with all the features that make the VP9 the success it’s been.

The original VP9 and its variants have a paddle-style magazine release. The pistols have levers along the trigger guard that press down to release the magazine. While the setup is ambidextrous, some people prefer more standard magazine-release buttons.

Although the paddle release system has its proponents, push buttons are more traditional, conventional and share a manual of arms with many other handguns. Like other contemporary push-button mag releases, the VP9-B safety is reversible for right- and left-handed users.

Swapping the button from the left side to the right requires no special tools and can be done in a couple of minutes. Heckler & Koch put together a video with simple instructions.

Apart from the new safety everything else is pure VP9. Like the original, the model B is a mid-size polymer-framed, striker-fired service pistol with a lot of modern touches.

The main feature that separates the VP9 from its competitors is that it has a completely modular grip assembly. The frame has both interchangeable side panels as well as a backstrap system for total customization of the grip shape.

The VP9-B also has a cocked striker indicator in the striker locking plate as well as a loaded chamber indicator along the extractor. It has a standard passive trigger safety lever in addition to its internal and drop safeties. 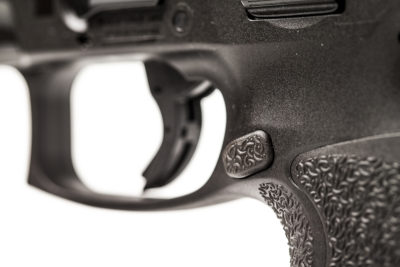 The magazine release sports the same texture as the grip. (Photo: H&K)

Chambered for 9mm Luger the VP9-B has a standard capacity of 15+1 rounds and lots of magazine extension options on the aftermarket. Reduced-capacity magazines are an option as well.

The VP9-B has the same 4.1-inch barrel and full-size grip as the original and maintains the ambidextrous slide release levers. The barrel has polygonal rifling for better performance at the muzzle and extended service life.

The slide also has forward serrations for things like press checks and other slide manipulation techniques. And the rear of the slide has extended tabs for ease of use – the tabs are removable for concealed-carry.

It’s possible that some existing holsters may not work with the slightly different frame profile. If you plan to carry the VP9-B be sure to check your holster compatibility.

While many VP9 fans have wholeheartedly adopted the magazine paddle, the VP9-B gives people more options, and that’s always a good thing. Heckler & Koch has been busy tweaking and altering the VP series to accommodate a wide variety of shooter wants and needs and this is a welcome addition.

Previous post: Vietnam War Hero Gets 7 Years in Prison for Purchasing an M14 Over 40 Years Ago