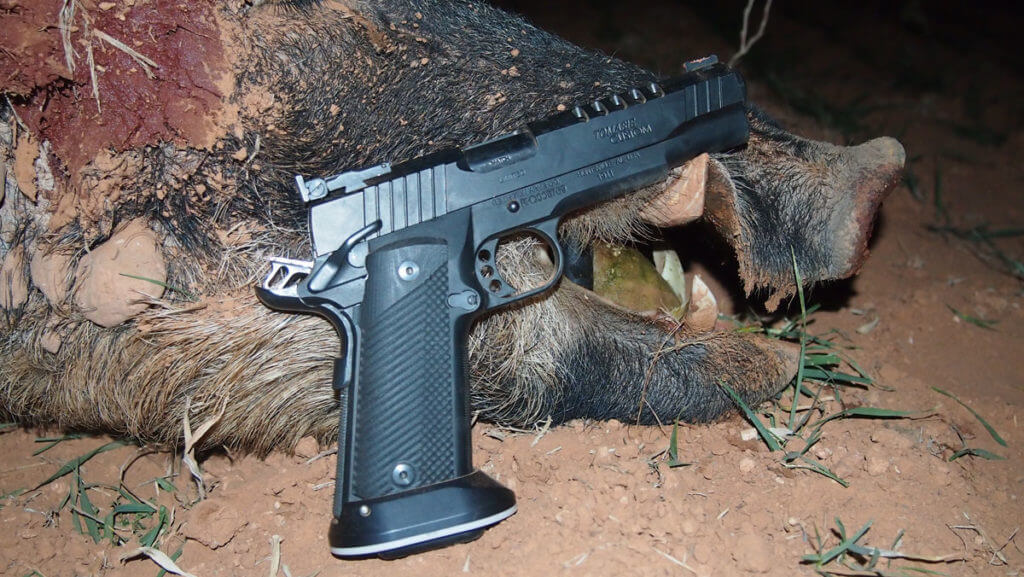 The moon was full with 99% visibility when Spike Box Ranch hunting manager Tyler Pounds and I left the bunkhouse for a night hunt. Although we wanted to do some calling, the sky was too clear and bright, meaning we were better off chasing hogs than coyotes or bobcats. Instead of loading the truck with a pair of rifles, though, we holstered up. Yes, we had handguns, and we were relying specifically on one of mine chambered in .40 S&W. Handgun hunting hogs with a competition 1911? Bring it.

The Spike Box was my choice for the inaugural hunt with the gun, the then-new Remington R1 Tomasie Custom Double-Stack (a full review of which is coming soon). Located in northern Texas, the Spike Box ranges some 90,000 acres and is a working cattle ranch. When you’re glassing for game–or hogs–it takes a moment to become utterly confident that it isn’t actually a cow you’ve spotted. Hogs are everywhere on the property–huge boars, fat sows, tiny bacon-bit babies–and if you see one all by its lonesome, give it a minute. Another is bound to appear.

The first rule of handgun hunting hogs? Have a gun. Second rule? Have hogs.

There is a multitude of options for handgun selection. Hunters are not limited to only single-shot, long-barrel pistols or magnum revolvers. In fact, you can even use your competition handgun to get it done. In this case that meant my R1 Tomasie Custom, a gun that had proven itself time and again on paper and steel. It was, after all, designed by Team Remington Captain Travis Tomasie. Tomasie took gold in the 2005 IPSC Handgun World Shoot–among other wins–and knows his way around a handgun. Because the R1 Tomasie Custom is meant for competition, it’s chambered in .40 S&W–a cartridge currently experiencing a decline in sales in the gun world at large. It’s a cartridge that just might be deserving of a comeback courtesy of the hunting world. 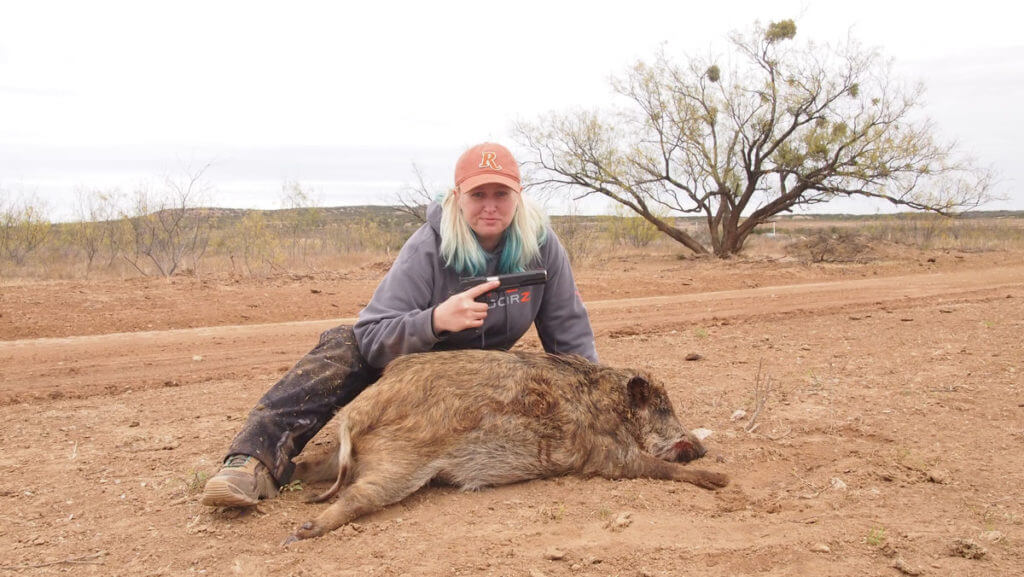 Hunting feral hogs with handguns is an excellent test of your skills and marksmanship.

Here’s the thing about smaller cartridge selection for hunting tough animals such as feral hogs. It’s your duty as a hunter to do everything in your power to ensure a clean kill. That means using a gun chambered in a cartridge capable of dropping a hog with one shot, not ten. Technically, 9mm can get the job done, but it’s walking a thin line because it is reliant on so many factors including incredibly precise placement and size of the hog. Is .40 S&W better? Yes. The same power factors that make it popular in the competition world make it a solid hog hunting choice. Sometimes fractional differences in size and power matter.

The first hog to be dropped by the .40 S&W-chambered R1 was averagely sized for the area. He weighed in around 130 pounds and dropped from a single round of Inceptor .40 S&W 88 grain ARX to the heart. It happened fast; it was dark, Tyler spotted him in a field, I raised the gun, and the hog hit the ground before he even knew what happened. My competition gun was officially christened as a dual-purpose hunting gun–with frangible rounds, no less. 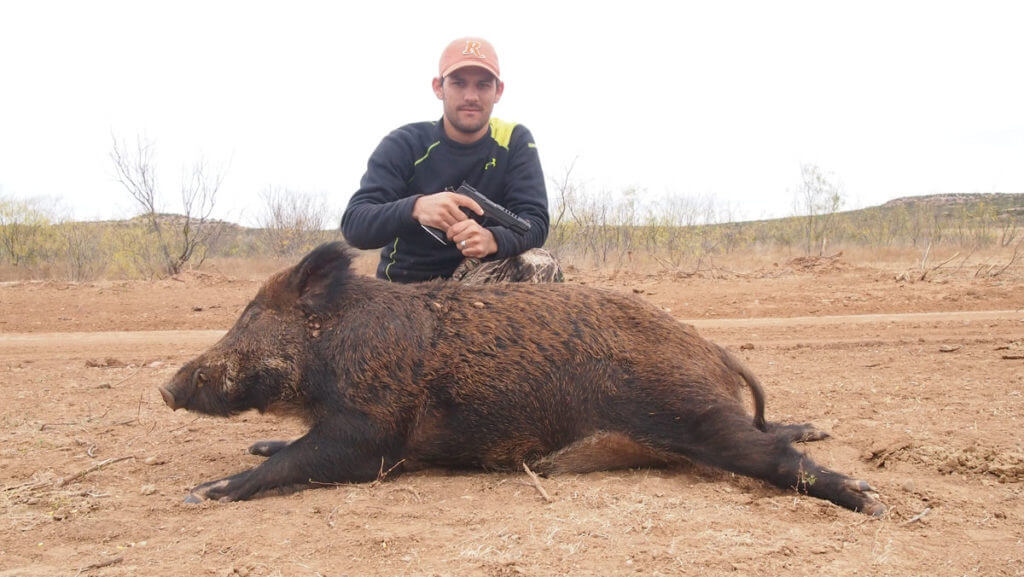 Inceptor ARX was utilized for the majority of the hunt. Many gun owners are understandably hesitant about using frangibles to hunt but, the reality is, they’re fantastic for dropping game of all sizes. Using Inceptor, I’ve hunted hogs, deer, coyotes, badgers–the list goes on.

Inceptor currently focuses on handgun cartridges–cartridges I’ve hunted with at length from .40 S&W to .45 ACP to 10mm–but does produce .223 Rem, which also performs well on game. Inceptor utilizes cutting-edge injection-molding technology to create the polymer-copper compound bullets, the .40 S&W version of which moves at over 1,400 feet per second. They’re lightweight, precise, and drastically reduce over-penetration risks. And they didn’t stop with that first moderately-sized boar.

In a matter of days the R1 Tomasie racked up half a dozen hog kills at my hands and several more in Tyler’s hands. When we shot them at night it was without the expected props such as red dots or lasers; the adjustable LPA rear sight and red fiber-optic front sight the gun arrived with worked just fine. Thanks to the fiber optic front sight’s ability to pick up light sources around it the red dot was quite literally dead-on.

Then came the big boar.

By the final night of the hunt, we were both tired. It had been an awesome multi-species week taking ducks, deer, and hogs–plus a few others–but I wanted one more nighttime hunt. Just a quick check of the fields, I told Tyler, and if we didn’t see anything worth going after right away, we’d call it a night.

First, we spotted another average boar–and shot him, of course. Then, as we slowly rolled by a dusty, dark field, a bulky shadow became visible in the distance. It was difficult to tell just how big the hog was but regardless of size, we wanted to go after him. So we did.

The stalk didn’t get far before the boar saw us which presented a problem because the mesquite-ridden tree line was close by.

Because the boar was headed for the trees his muddy behind was my biggest target but a Texas heart shot wasn’t on my To-Do list, so I waited. The tips of his ears bobbed into the air as he moved, and then he made what would become his fatal mistake. He turned his head to look back at us. Without stopping to think about it, I raised the R1 Tomasie in my strong hand, put the red fiber-optic behind his ear, and fired.

A single shot to the head felled a 250-pound boar that was running away from me at approximately 25 yards. A frangible .40 S&W bullet. It wouldn’t be the last, either. At this point, the R1 Tomasie Custom has brought down dozens of hogs of all sizes. Most shots made on the hogs have been to the heart or lungs and one shot is all it takes. Yes, .40 S&W can drop a hog, even the big boys.

Hunting hogs with handguns is challenging. It adds a layer of interest and skill to a pastime normally undertaken with rifles; if you holster a handgun instead of slapping a magazine into your AR-15, you’re committing to heightened trigger and breath control, more precise placement, and closer ranges. Although I’ve shot hogs using bolt pistols from hundreds of yards away, the average handgun only has a barrel between four and six inches long. Being close isn’t just a fun test of your talent, it’s a necessity. 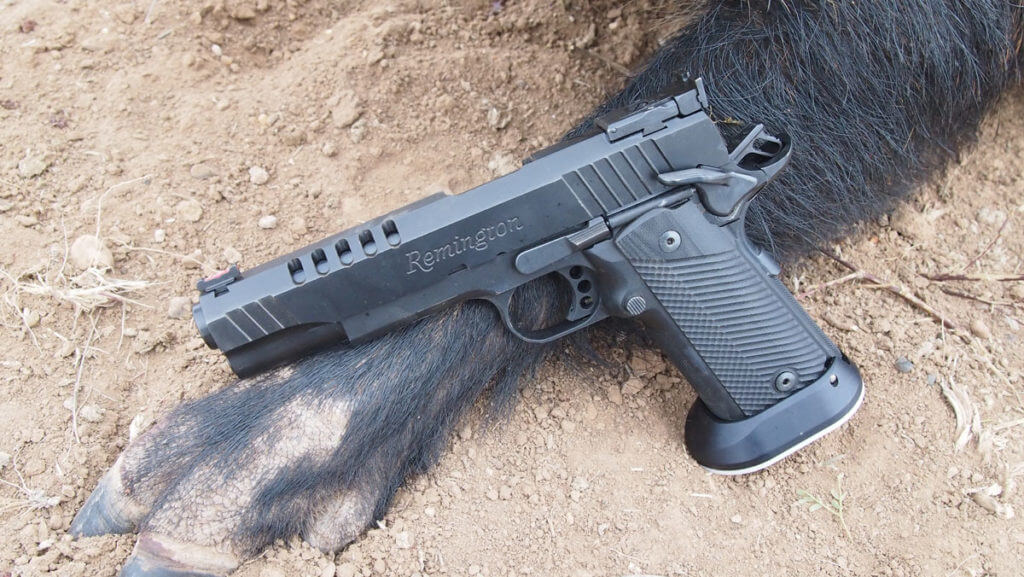 The Remington R1 Tomasie Custom Double-Stack in .40 S&W has proven itself as a fantastically accurate dual-purpose competition and hunting handgun. 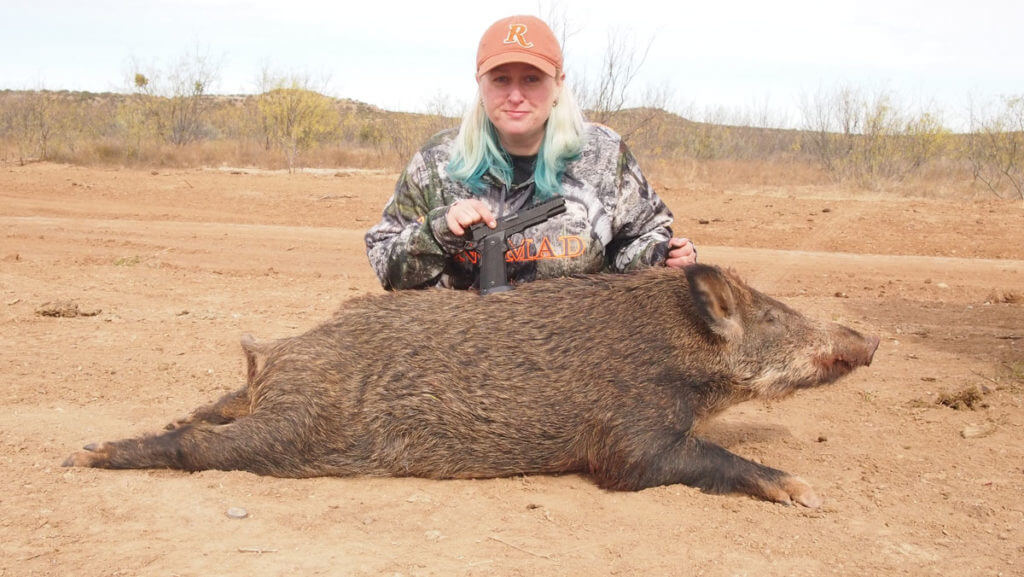 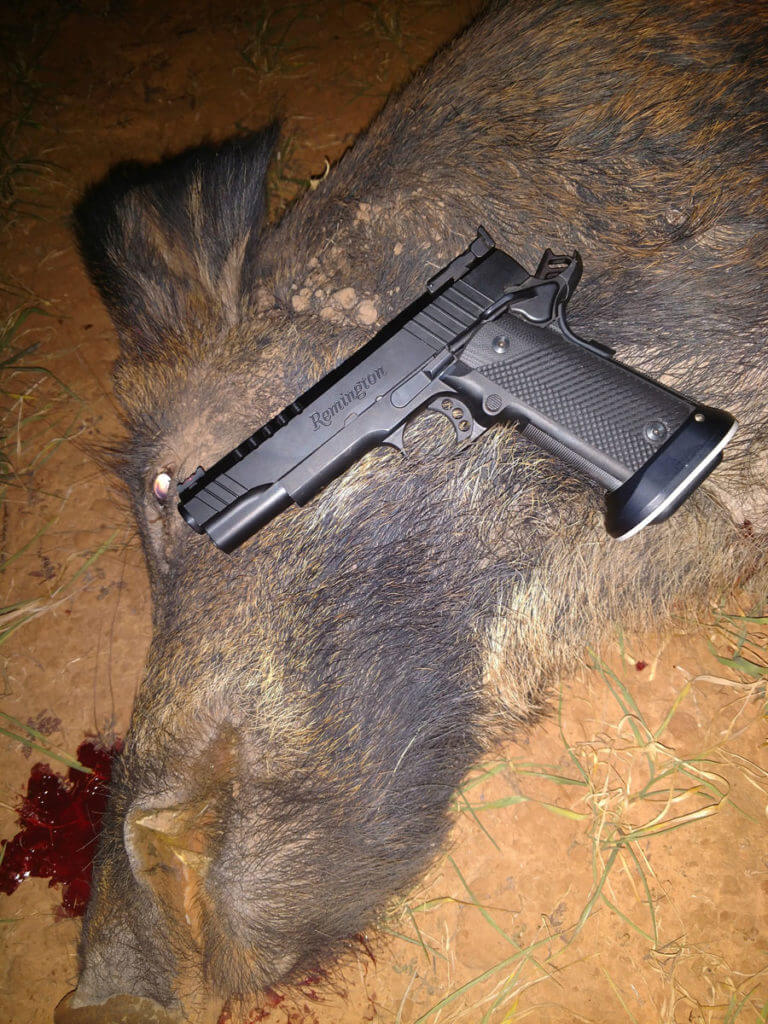 On the final night of the R1 Tomasie Custom’s first hog hunt the author dropped this 250-pound boar with a single shot to the head.

Take the time to practice with your handgun. Just as a single shot fired from your rifle isn’t sufficient preparation neither is one shot or one magazine run through your handgun. Shoot as you intend to hunt whether that means using shooting sticks or shooting offhand. When you practice, use the same ammunition you intend to hunt with just as you would with a rifle. To hone your marksmanship at varying distances as realistically as possible use targets like Birchwood Casey PreGame 16.5-inch x 24-inch Boar targets. The PreGame targets have contrasting-colored reactive zones depending on where your bullet strikes the paper and feature a full-color image of a feral hog with its vital zone outlined. 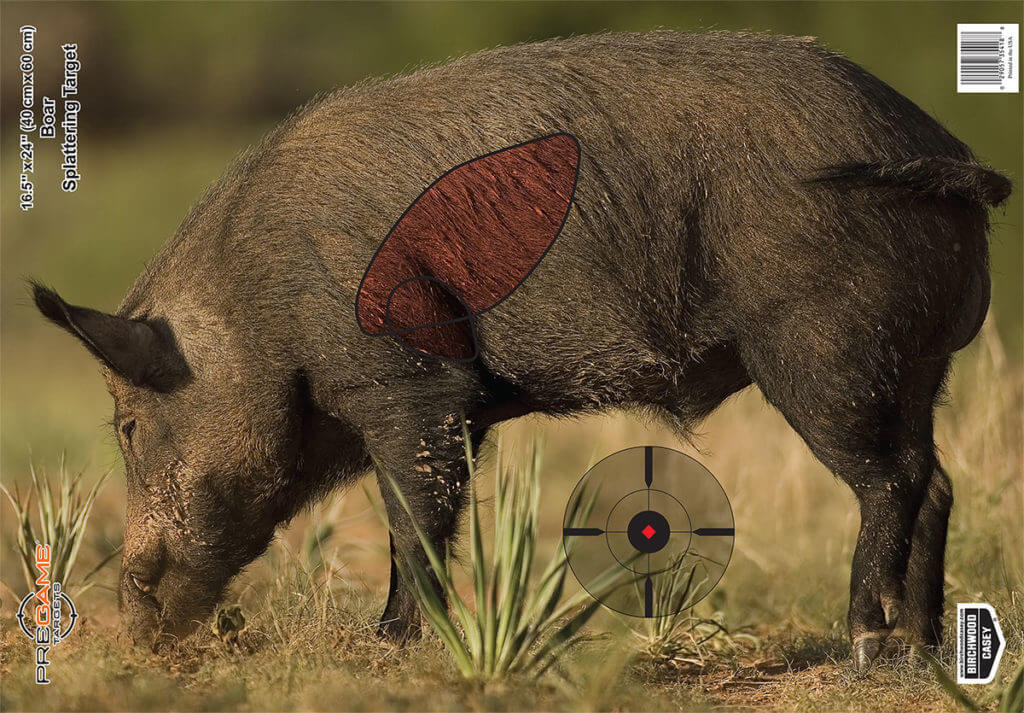 Hitting the woods and fields with handguns is fun. They’re easily portable, highly maneuverable, and lighter weight. With practice, you’ll find rapid target acquisition and precise shot placement will come naturally so long as you work within your abilities. Figuring out what you and your gun are capable of is part of the process as well. Don’t stick to shooting targets at only 10 or 25 yards; work through shot placement at multiple distances so you know where the bullet will impact.

You’ll be ready to hit the fields with your handgun in no time. And when you do, you’ll find there’s nothing quite like chasing a sounder of hogs with a handgun (just don’t forget the spare magazines).