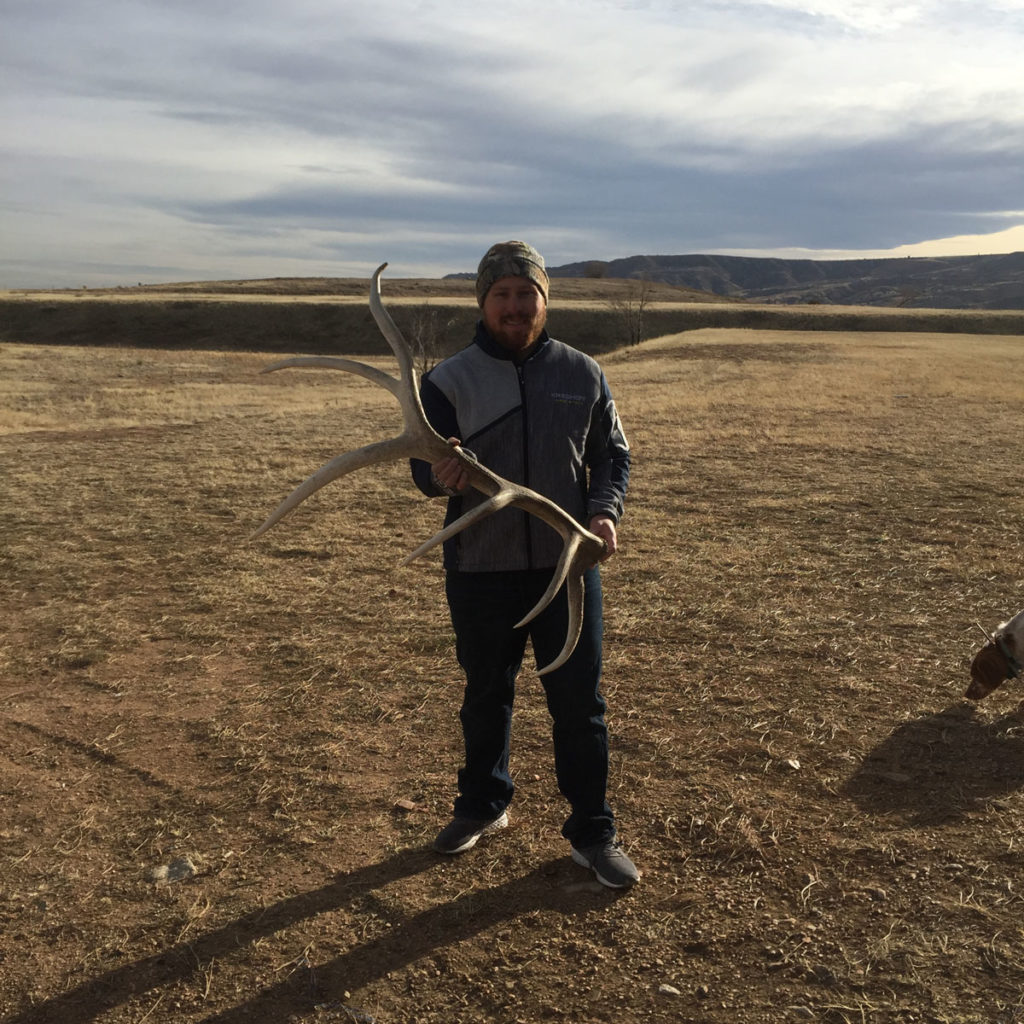 As the hunting season comes to an end in late January, many hunters plan for the long drought of game and wait for the time when they can apply for next year’s tag draws or plant food plots. For many, the only oasis in this time period is turkey season. However, there is another way that we can pass the time “hunting” that serves a few purposes. I can promise that it will get you out into the woods before turkey season and it will help you see if the bucks and bulls, which you chased through the season, made it. An exciting and productive pastime that has become very popular for many outdoorsmen and women is shed hunting.

In late winter, as almost every hunter knows, antlered big game begin to lose their antlers to begin the new process of regrowth during the summer months. For many Americans, this marks the beginning of shed season. The popularity this time period has gained has led to regulation in many states, both to lessen the pressure on animals trying to survive on the winter range and also gain some added revenue on public lands. In some western states, the local wildlife agencies publish season start dates. There can also be different start dates for public and private land, so if you plan on getting out and trying to find some antlers, make sure you check the local state regulations to keep you legal. 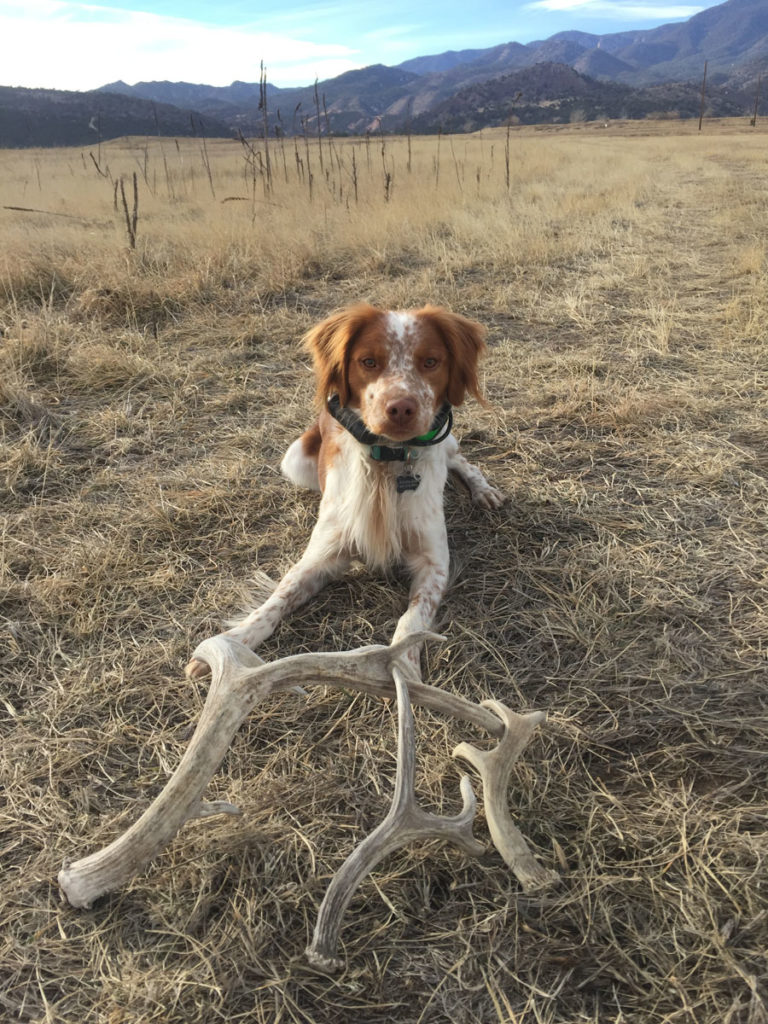 Just like any type of hunting, there are several different techniques that you can use in order to be successful in the field and come home with some bones. Similar to when you are chasing deer and elk with a bow or gun, scouting cannot be underestimated. The patterns of animals often change late in the winter and they may not be found in the same areas that you found them in the hunting season. Start looking for deer tracks in the snow and trails that can lead you to where the animals are resting on hillsides and in draws. Be sure to check around beds very extensively. The animals tend to spend a lot of time resting during this time of year to conserve energy so odds are they will drop around or near their beds.

One key factor to finding sheds in winter is to find the food. Bucks will be looking to try and put weight back on after a long rut and they will spend almost all their time either resting or eating. When it comes to resting, deer and elk will tend to rest on southern exposures in the winter months. If you live in the west, this can be a great advantage to finding bucks and waiting for them to drop. Get up high and use your glass to locate the deer beds and their travel corridors. If you can establish the travel corridors, find the places where the bucks and bulls may have to jump. This could be anything from crossing a fence, jumping over a deadfall or even crossing a creek. It is optimal to find any place where gravity can help the antlers jolt off to the ground.

Also, make sure to walk slowly and look at the ground when you are trying to find sheds on trails or in thick bedding cover. The technique is very similar to searching for arrowheads. I have found that just like looking for arrowheads, it is often what looks most out of place that results in a find. Keep on the lookout for smooth rounded lines that head toward a tapered point or the bridge looking shape of an antler rising above the grass. 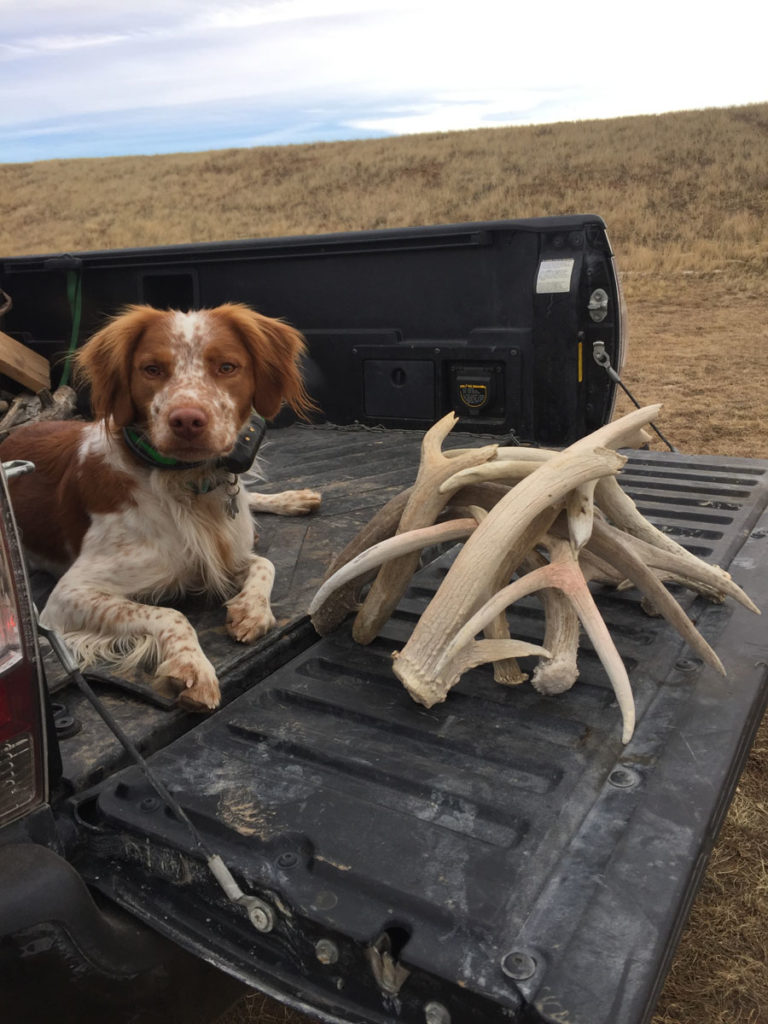 The last, and personally my favorite way to find sheds is with a dog. Obviously, there is a little more effort and commitment to this technique, but it can be a good way to cover a much larger swath of ground. I have trained my bird dog to find sheds and have been very surprised how well the dog can pick them up. I am not quite sure if he can actually smell the antlers or if he just covers so much more ground than I do that it is more likely that he will run into one. Either way, my Brittany has picked up 15-20 small to medium sheds in every season. If you do choose to use a dog, be sure to check your local regulations and see if there are any restrictions and see if, or when, you can use a dog to hunt sheds.

Regardless of how you decide to get out and try and find some sheds, it is by far one of the most fun things to do during a time of year when there aren’t many other options. If you hunt one area, in particular, it is an opportunity to see if the bucks on your list have made it through the winter. And if you are searching for a new area, it is a great way to help narrow down migration corridors to check out in the fall seasons. Either way, it will make you a better hunter. There are few better feelings than when you spot a huge elk or deer shed from across the valley and you walk over to pick up a big brown antler. If you have experienced that before, you know what I am talking about and if you don’t, I suggest that you get out there this spring and give it a try.

Previous post: How to SHOOT Black Powder Pistols for the First Time