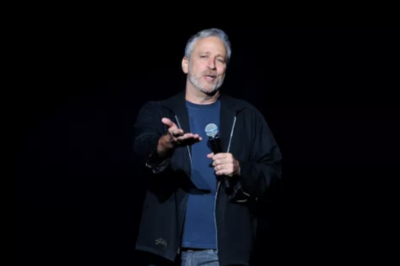 Comedian Jon Stewart made a joke this week about purchasing AR-15s.

Before a crowd of veterans attending the “Stand Up for Heroes” benefit at the Hulu Theater in Madison Square Garden, Stewart launched into a bit about the relative ease at which one can purchase America’s most popular rifle.

After filling out an application and waiting two weeks, “they called to schedule a home visit to make sure the environment was going to be appropriate,” Stewart said, as reported by USA Today. “You know what? Never mind, sorry. I tried to adopt a cat. I got an AR-15 in three minutes online. It’s harder to adopt a (expletive) cat than to get an AR-15. What is wrong with us?”

Stewart also lambasted the inaction on gun control following the recent shooting at a Pittsburgh synagogue.

“If other people kill us, we will make (soldiers) go to their place forever. That’s basically how Americans learn geography now,” he added. “But if we kill each other, we do nothing.”

Buried in that punchline is the real solution to mass killings. Stewart’s just too blind to see it. Si vis pacem, para bellum. Translation: If you want peace, prepare for war.

The reason why we put boots on the ground in a foreign land when we’re attacked is to confront the next attacker before they have the opportunity to take innocent lives.

The same philosophy should apply to homegrown mass killers, albeit in a civilian-driven capacity. End gun-free zones. Empower citizens to take responsibility for their personal safety by, among other things, exercising their 2A rights. And you’ve effectively put an end to soft targets.

Will mass killers continue to crop up from time to time? Sure. Because there’s no way to vanquish crazy altogether. But instead of reading stories where almost a dozen unarmed people are killed at a place of worship, we’ll start reading more stories highlighting people like that heroic concealed carrier who fatally shot a crazed gunman at a McDonald’s in Alabama last month, likely saving the lives of everyone inside the restaurant.

Trust me, Jon. We want to do something — we want to actually address this problem. We just need you and all your anti-gun pals to get the hell outta our way.

Next post: WATCH: Mom Shoots Intruder Who Claims Her House Is ‘My House’