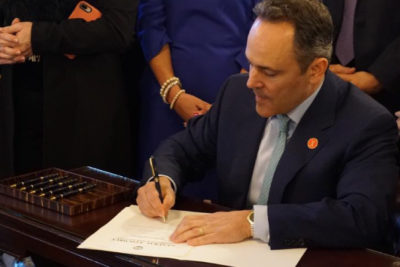 Kentucky Governor Matt Bevin signed a law Monday that will allow residents over the age of 21 to carry concealed firearms without a permit as long as they meet the requirements to own a firearm. Kentucky joins 16 other states that allow for some form of “constitutional carry.”

Gov. Bevin told local media that the bill supports the right to keep and bear arms, and he noted that Kentucky won’t be alone in allowing residents to carry without a permit.

“It recognizes the Second Amendment of the Constitution of the United States,” he said. “That’s really it. It doesn’t break new ground.”

To those who disagree with the new policy, Bevin had a clear message.

“This is America. Not everybody agrees on everything. That’s the beauty of America,” he said. “For those people who are offended at this idea and don’t like it, there are other places in America where they could live and/or they can learn to live with what they don’t like in their own immediate state.”

The measure passed the Kentucky Senate on a 28-to-8 vote last month, and it passed the House by a 60-to-37 vote last week.

Supporters also argued that since the state already allows for open carry without a permit or training, constitutional carry won’t change the status quo.

“This bill decriminalizes wearing a coat in the state of Kentucky,” National Rifle Association state director Art Thomm said in a committee hearing.

“Without proper training, carrying a gun close to your body like that, I just don’t see any good coming from it,” Latreese Cannon, a certified firearms instructor for the state, told local media. “… Basically just giving them a license to carry to kill. It’s kind of scary.”

The Kentucky State Fraternal Order of Police also worried that armed and untrained residents won’t know how to act when stopped by law enforcement. They wrote in a Facebook post that while they are “very much supportive of citizens rights,” they are concerned “for the general public to know what to do if encountering law enforcement while armed.

They encourage anyone stopped by police to follow the acronym FOP: “Firearm – let us know if you have a firearm and don’t reach for it, Obey – do what the officer asks of you, Precision – make all moves very direct and tell us what you are doing.”

Out-of-state activists weighed in as well.

Fred Guttenberg, whose daughter was killed in the Parkland massacre, described the bill as a “major setback” in an interview with Newsweek.

“This bill has nothing to do with public safety and is simply going to make it easier to sell more guns,” Guttenberg said. “Shame on the legislators who have given up on their responsibility to defend the right to life of Kentucky citizens and to take steps to keep them free of gun violence. I hope the donations they receive from the (National Rifle Association) is worth it.”

(Editor’s Note: There have been some questions as to whether Kentucky is the 16th or the 17th state to adopt Constitutional carry.  According to the NRA-ILA, it’s the 16th after Alaska, Arizona, Arkansas, Idaho, Kansas, Maine, Mississippi, Missouri, New Hampshire, North Dakota, Oklahoma, South Dakota, Vermont, West Virginia and Wyoming.  However, we reported it was the 17th because we, like the Crime Prevention Research Center, include Montana, which is permitless in 99.4 percent of the state.)