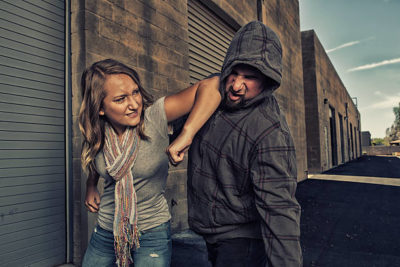 Understand your right of self-defense so you will know when you have a duty to retreat. (photo/iStock)

Although currently in the minority, some jurisdictions impose a duty to retreat. In those jurisdictions, you may not use force to defend yourself unless you first attempt to remove yourself from the situation. Generally, retreat is not required unless you can do so safely.

In order to understand the duty to retreat, you must first learn about your rights as they relate to self-defense.

Self-defense is generally defined as the right to prevent suffering, force, or violence through the use of a sufficient level of counteracting force or violence. The definition seems easy enough to understand, but it is sometimes difficult to apply in real-world situations.

In the real world, questions arise like: What is a sufficient level of force or violence to use when defending yourself? What if an attack is provoked by the apparent victim? Can you defend yourself if you reasonably perceive a threat that does not actually exist? Each state has developed laws to address these questions. This article will address general considerations that apply.

When does self-defense apply?

As a general rule, self-defense is only justified when there is an immediate threat. The threat can be verbal as long as the verbal threat creates an immediate fear of physical harm. If there is no threat or fear of immediate harm then the right of self-defense does not generally exist.

What constitutes fear of harm?

How much force can I use in self-defense? 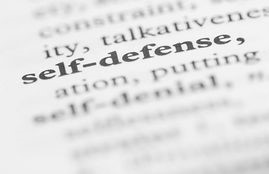 If you want to understand the duty to retreat, you must first learn about your right to self-defense. (photo/Shutterstock)

Generally, self-defense allows a response that matches the level of the threat. Said another way, a person can only use as much force as is required to remove the threat. If a threat involves deadly force, the person defending himself can use deadly force in return. If the threat involves only minor force, then only minor force can be used. If the amount of force used is greater than the amount of force threatened, then the claim of self-defense will fail.

Can I defend other people?

The same principles that apply to defending yourself generally apply to cases involving the defense of another. A person may be permitted to defend another person if he has a reasonable fear that the other person is in danger or reasonably believes that force is immediately necessary to protect the person from a third party’s use of force.

Does self-defense apply even though I can’t safely retreat?

Do I always have to retreat?

Examples of self-defense and duty to retreat

Let’s look at some examples to drive the point home. In these examples, we will assume that the duty to retreat applies.

Example 1:  You are at a stadium watching a football game. An opposing fan starts arguing with you about which team is better. The argument escalates and the fan walks towards you saying he is going to “break your face.” As the man gets closer, you hit him in the face breaking his nose.

In this situation, you were not justified in striking the fan because you first had a duty to retreat. A self-defense claim would fail.

Example 2: You are waiting at a bus stop. While you are waiting, a man approaches you and pulls out a knife. The man demands your wallet. You do not believe you can safely walk away without being stabbed by the man.  You use your handgun and shoot the man.

In this situation, you could not safely retreat. The man threatened deadly force by brandishing the knife. You used deadly force to stop his attack. A self-defense claim would succeed in this case.

Example 3:  You are at the bar having a drink. A man walks over to you, throws a drink in your face and threatens to fight you. You retreat from the situation and leave the bar. The man follows you outside and says he is going to teach you a lesson. He puts up his hands in a traditional boxer’s stance and comes towards you. You use your handgun and shoot the man.

In this situation, you tried to retreat but the man followed you outside. Once outside, the man threatened to fight you and advanced towards where you were standing. Using a gun to defend yourself against someone who is threatening to hit you with his closed fists will likely be found to be an excessive use of force. A self-defense claim would likely fail.

Example 4:  You are at a park and you see a man approach a woman. The man grabs the woman’s arm and starts yelling at her. The woman cries out for help as the man raises his hand to strike her. You run over and hit the man in the face. The man runs away.

In this situation, you saw a third person who reasonably appeared to be in immediate danger of being hit. To defend her, you ran over and struck the attacker in the face. The amount of force used matched the perceived use of force by the attacker. Since the woman was in imminent danger and the use of force was reasonable, a claim of self-defense will likely succeed.

Here are some things to keep in mind if you are in a “duty to retreat” jurisdiction:

• You have a duty to retreat and not a duty to put yourself in danger. If you cannot safely retreat, then you can act reasonably to defend yourself.

• The laws of each jurisdiction are different. It is best to check with an attorney in your jurisdiction so that he can advise you on the specific legal standards that apply where you live.

Why have a duty to retreat?

Ultimately, whether your jurisdiction imposes a duty to retreat does not really matter very much. Whether you have to retreat or are allowed to stand your ground, your right to defend yourself remains the same.

Anti-gun advocates want us to believe that a duty to retreat reduces violence. The implication is that those of us who would defend ourselves without running away would be the ones committing the increased acts of violence. That simply isn’t true. Just because a person is allowed to stand up to an attacker at the beginning of an encounter does not mean he will use excessive force to defend himself.

Consider this: A person who stands his ground may intimidate the attacker and make him think twice about using force or violence in the situation. The opposite may also be true. A duty to retreat may increase incidences of violence because those who initiate unlawful attacks will be emboldened when victims turn and run away. Is it any wonder an increasing number of states are adopting stand your ground laws and allowing people to defend themselves and their families at the first sign that an encounter is taking a violent turn.

Regardless, the battle lines over this issue have been clearly drawn. The anti-gun crowd will continue to try and eliminate stand your ground laws.  As law-abiding gun owners who want to protect ourselves and our families, we must arm ourselves with knowledge about the self-defense laws where we live so that we can be prepared in the event that we have to exercise our rights.