First-Look and Review: The New LTO Tracker2 Thermal From Leupold

You can count on at least two things during every SHOT Show, the shooting sports industry’s mega-trade show held each January in Las Vegas. One, the crowds will be large enough to trample an elephant.

Two, and more importantly, Leupold Optics will have new and upgraded optics on display for serious hunters and shooters.

This year, 2019, was no exception, at least on the Leupold side of the equation, as Leupold introduced their improved handheld thermal imagers, the LTO Tracker 2 and LTO Tracker 2 HD. The Tracker 2’s represent the first upgrades for the Tracker line, launched by the company a couple years ago. 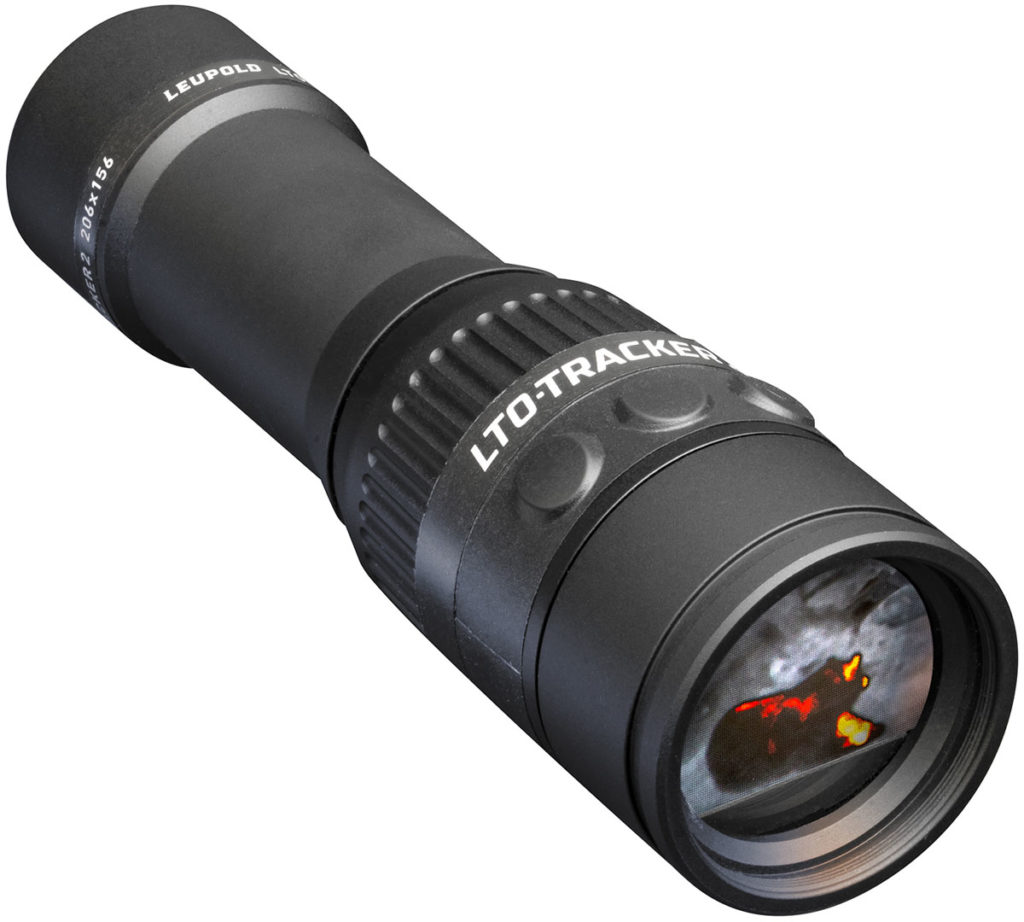 Leupold’s handheld thermal LTO Tracker 2, an upgrade on its LTO Tracker, is perfect for blood trailing and mid-range scouting.

I was able to secure an LTO Tracker2 pre-SHOT (not the HD model) and run it for several days–and nights. The Tracker 2 is a handy little thermal unit, solidly built and easy to use. It’s perfect for blood trailing, mid-range scouting and is just the thing for making sure you don’t bust that big buck on the way to your hunting stand in the darkness of the pre-dawn.

The three control buttons on the LTO Tracker 2 are easy to use. Located above the LCD display screen at the rear of the unit, the rubber-coated control button operate, from right to left respectively, Power/Color Palette, Zoom/Brightness, and Beacon Mode.  After a brief run through, I had no trouble finding and using the buttons at night, where it really counts.

The LTO Tracker 2 works off three easy-to-find buttons (even in the dark). From right to left: power/color pallete; zoom and brightness; Leupold’s Beacon Mode.

To replace the one CR123 battery that runs the unit, you unscrew the Tracker 2 via the center ring. Leupold added a very helpful feature here, too: a metallic strip inside the battery compartment. The strip is part of the unit’s electric system, but it also attaches the two halves of the Tracker 2. That way, you won’t lose one half of your Tracker 2 at night changing batteries! Nice touch. 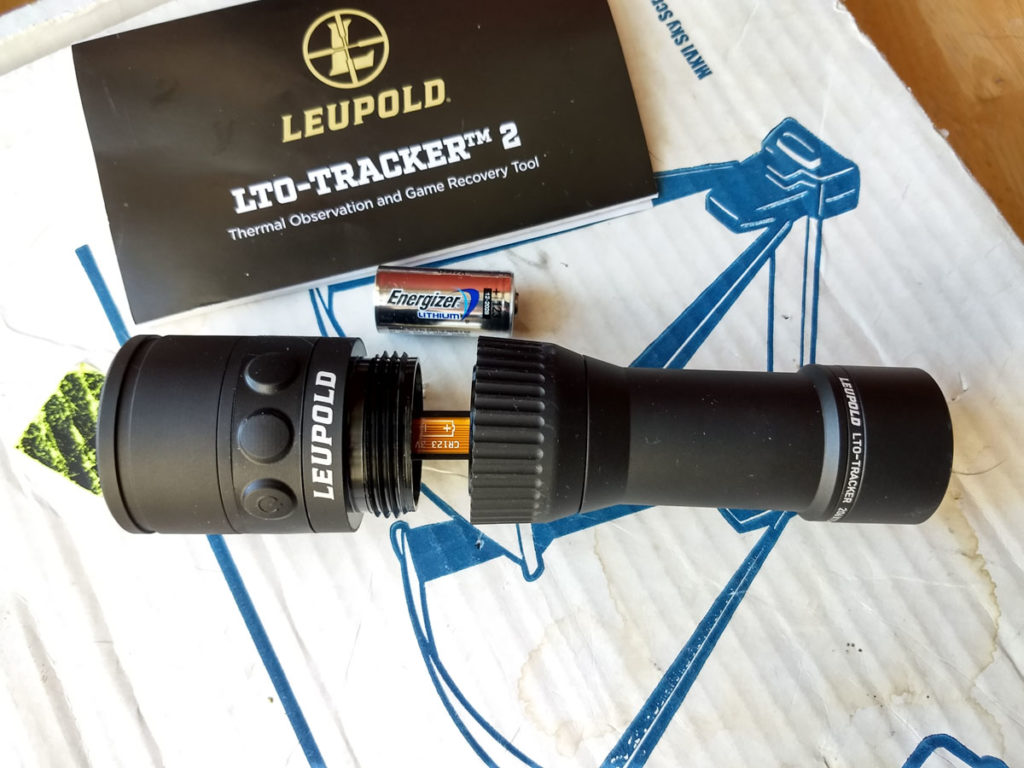 The Tracker 2 runs on a single CR123 battery, accessed by unscrewing the unit. The metal strip between the halves is part of the electrical system and keeps the two pieces attached.

The Tracker 2 is also 100-percent waterproof.

The big upgrade to these two Tracker 2 models is what Leupold terms the “Beacon” mode. When selected, the Beacon mode quickly recalibrates the screen for increased detection in hot environments. When activated in one of three Hi-Bright screen colors, Beacon mode detects the warmest object in the active image and rebalances all the Hi-bright colors back down to grayscale.

Result: The screen is a grayscale color under the Beacon threshold until a “warmer” spot is detected and is then displayed as a Hi-Bright condition. Any exposed areas of that deer or hog crouched down behind brush, for example, should pop right up into the Tracker 2’s screen. The Beacon mode is standard in both the LTO Tracker 2 and the LTO Tracker 2 HD.

The LTO Tracker 2 features a user dimmable display, 204×204 pixel thermal sensor resolution, and 206×156 pixel thermal sensor. Leupold rates it as having a 600-yard “overall detection distance” on thermal targets and a 250-yard typical deer detection distance. Meaning, at the further distances you should be able to spot a game-sized target, though it will be little more than a colored blob. Get closer, within 250 yards, and enough details emerge that you can now tell that blob is actually a deer, hog, elk or person.

(The LTO Tracker 2 HD has a user-dimmable, 390×390 full-circle display. The 320×240 thermal sensor delivers twice the resolution over the LTO Tracker 2 and has an overall detection distance of 750 yards with a 300-yard typical deer detection distance, and a higher suggested retail. The unit ships with lens covers and a neoprene cover that also helps insulate hands when the mercury drops.)

For my testing, I started with what I consider a top use for a small, handheld thermal: blood trailing.

To mimic a blood trail, I filled a small plastic squeeze bottle with eight ounces of hot, tap water and a quarter-ounce of dishwashing liquid soap, the later to give the water a viscous feel similar to real blood.

Squeeze bottle I hand, I stepped out into my yard in north-central Wisconsin, at night, and proceeded to lay down a winding “blood trail” between some pine trees. I also laid down a series of blood spots. This was a mid-January night, the ground frozen solid as it had been for a good month and a half, with the air at a brisk 20-degrees Fahrenheit and dropping fast.

There’s a reason they call Wisconsin the “Frozen Tundra!” 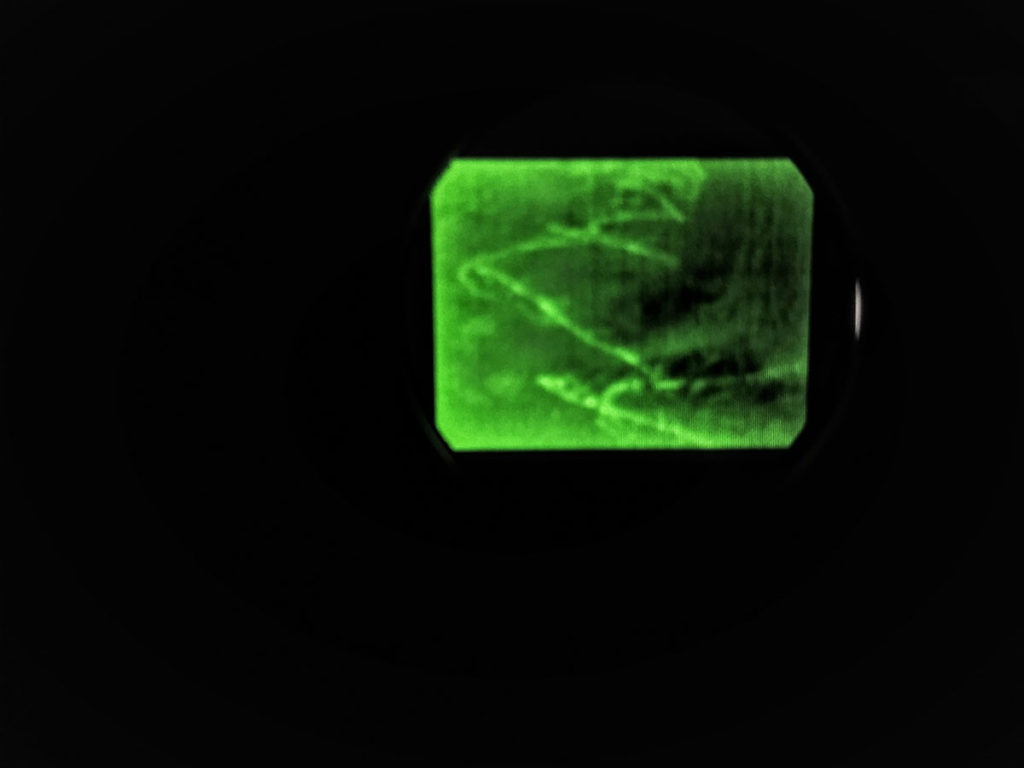 Seen through the Tracker 2, the author’s “blood trail,” a minute after it was laid down, on frozen ground and in 20-degree temps.

As I suspected, my blood trail showed up very clearly a minute after being laid down.  From five to ten yards, I could see every twist and turn in the trail through the Tracker 2. Same with my blood spots.

The real test came ten minutes later when I returned and re-examined the trails and spots. The Tracker 2 still revealed them fine. Yes, the lines and spots were fainter than they’d been ten minutes before, the ground and air having cooled the liquid considerably. But had I waited ten minutes after taking my shot to track down my animal?  I still would’ve been able to follow a trail and/or spots pretty easily. 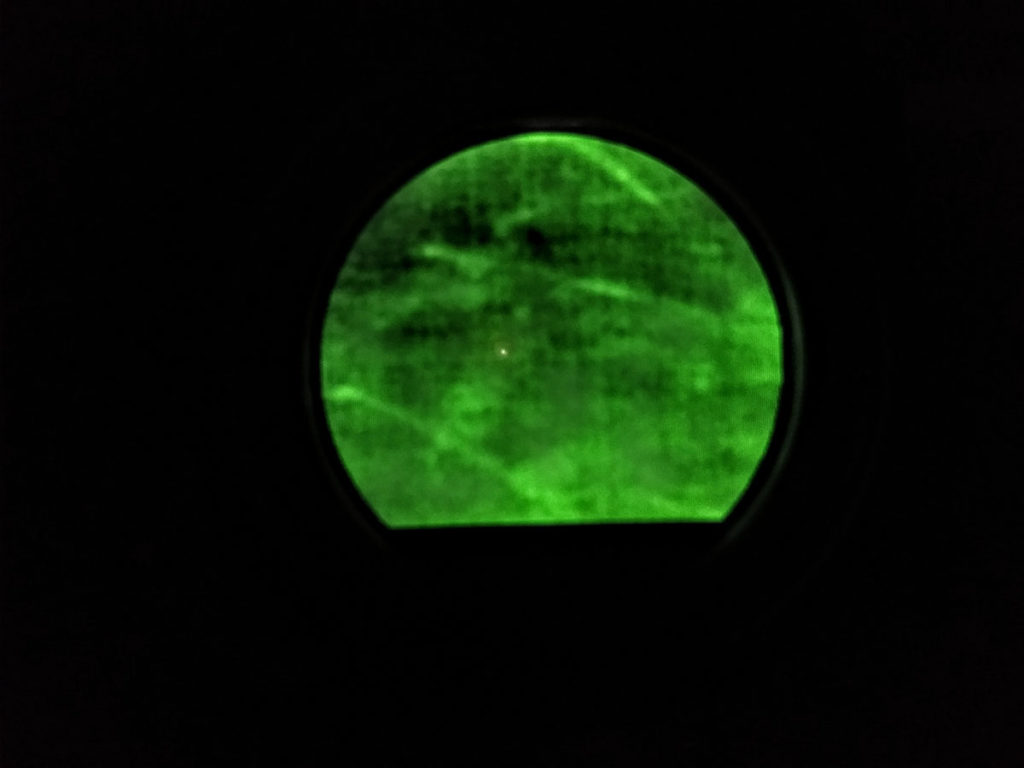 If the ground and air were warmer, the Tracker 2 would reveal the blood trail and spots for a good deal longer.

NOTE: my photographs of the “blood,” as well as animals, were taken with my cell phone, with me holding the cell in one cold hand and the Tracker 2 in the other. I did the best I could, but the photos are nowhere as clear as the actual images I saw through the Tracker 2. (I wonder if there’s an attachment that would make cell pics easier?)

I followed up this test by driving back roads outside of town looking for some warm-bodied animals. Of course, there’s never a deer standing in the middle of an open field at 10PM when you need it.

I ended up going to our local zoo, which contains a ten-acre high fence enclosure. Different sections within the fence hold bison, elk and whitetails.

I first went to the zoo with my Leupold RX-1200 DNA range finder, recording various distances from the fence line to, for example, feeding stations. Those distances ranged from 80 to 250 yards. Then I came back that night, another cold one at 14 degrees.

The deer and elk were nowhere to be found (bedded down in their shelters, no doubt), but the five bison didn’t give a damn about the cold. They were out and moving. 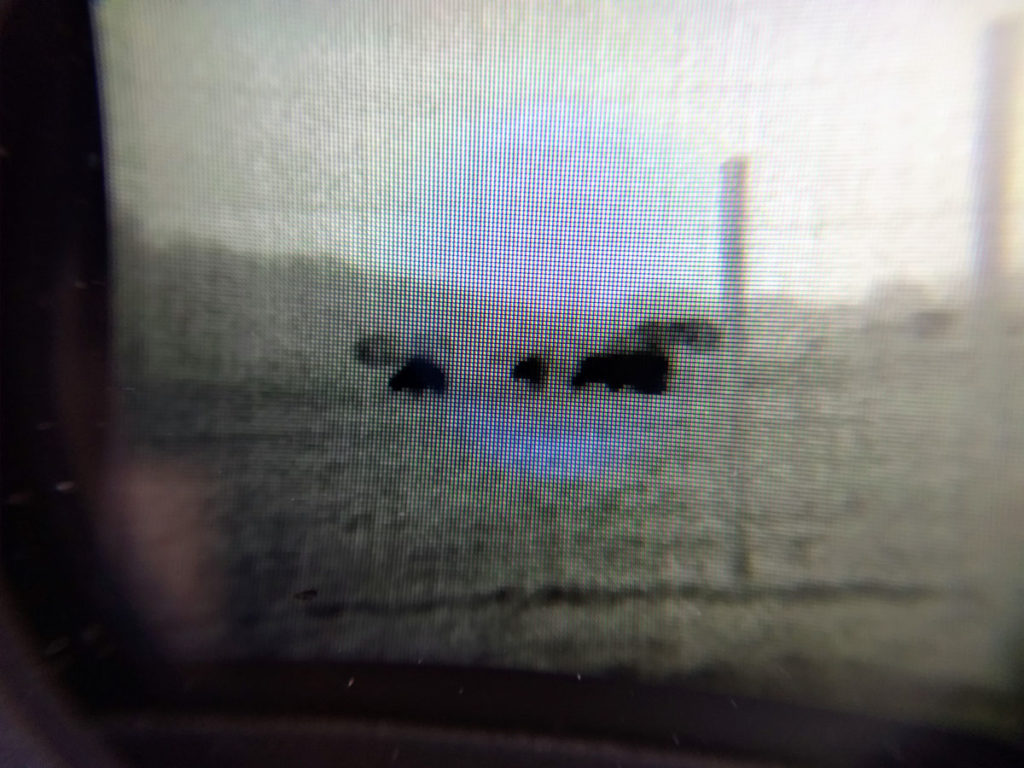 At 125 yards and at 3x magnification, four bison (two clumped together on right) seen through the LTO Tracker 2.

The Tracker 2 has a digital magnification built into the unit. The unit starts off at 1x, but press the center button atop the rear screen and it pops up to 1.5x. Press again for 3X, then 5x, and finally 7x.

That magnification was a real aid from 1.5x and 3x. I found myself scanning at 1.5x most of the time and moving to 3x when I spotted something. But the problem with the 5x and 7x is the images became so grainy, almost all detail was lost when the object was over 200 yards distant. 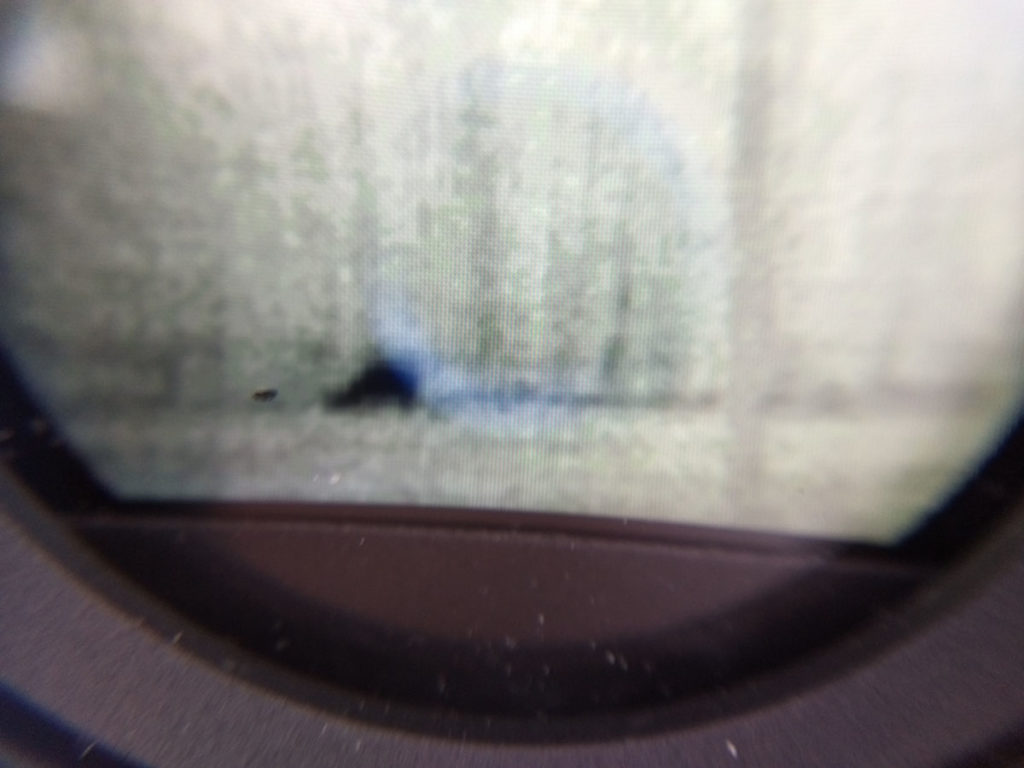 A single bison at 200 yards, 3x magnification, through the Tracker 2.

Leupold’s Beacon mode worked fine; it evened out the background clutter in the screen and pulled forward the heat signature of the object. But not at larger distances. Again, up to 200 yards and the Beacon mode works nicely. Past it and the images become very indistinct. 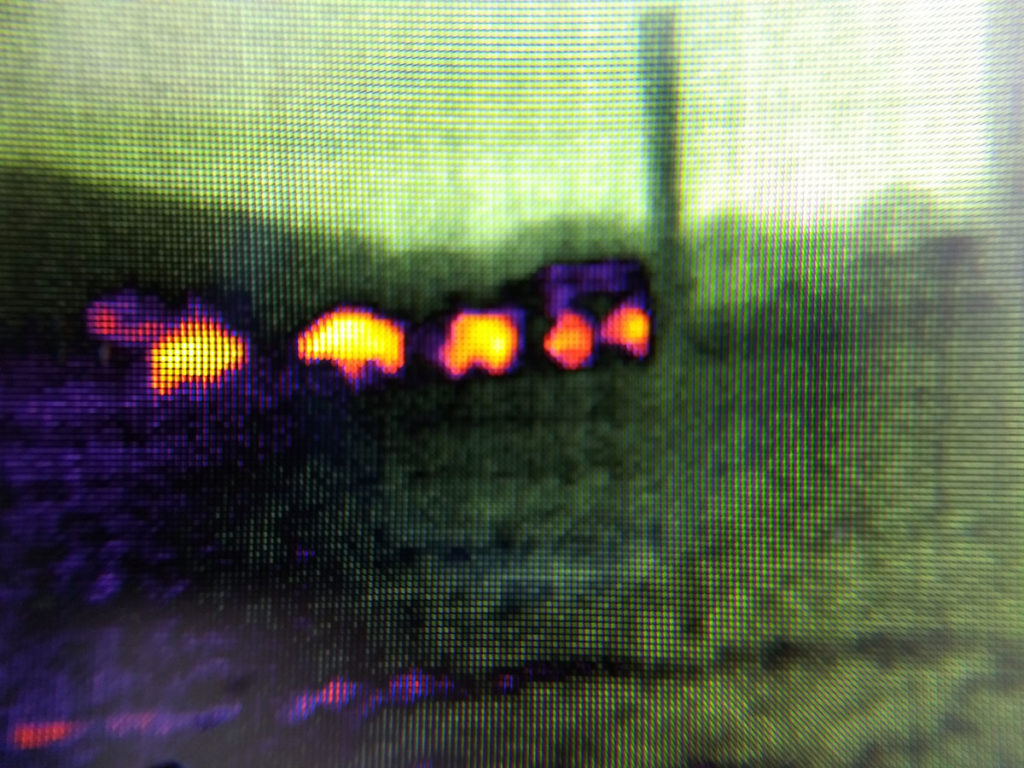 In Leupold’s Beacon Mode, five bison at 100 yards with the Tracker 2.

And since the Tracker 2 is thermal (not night vision) and identifies heat sources, you can use it during the day as well as the night.

A compact unit, the LTO Tracker 2 should be especially useful to those of us who hunt in and around big woods and thicker vegetation. The Beacon Mode will be a plus in these more cluttered locales. And, while we’d all like to drop every game animal where it stands, even a solidly hit animal can run a couple hundred yards before toppling over. In these cases, the blood tracking ability of the LTO Tracker 2 will shine.