MRAD or MOA? This age-old argument has split up groups of friends, been the creation of forum websites and caused tons of contention between father and son. In the end, depending on the person, both are best. Because of only offering MRAD options, Leupold has been missing out on sales from the MOA side of the market despite having high quality, bombproof equipment to offer. This ends at the release of the new Mark 5HD riflescope in MOA. Yes, Leupold is introducing MOA into the Mark 5HD line which more than likely foreshadows some products to come. 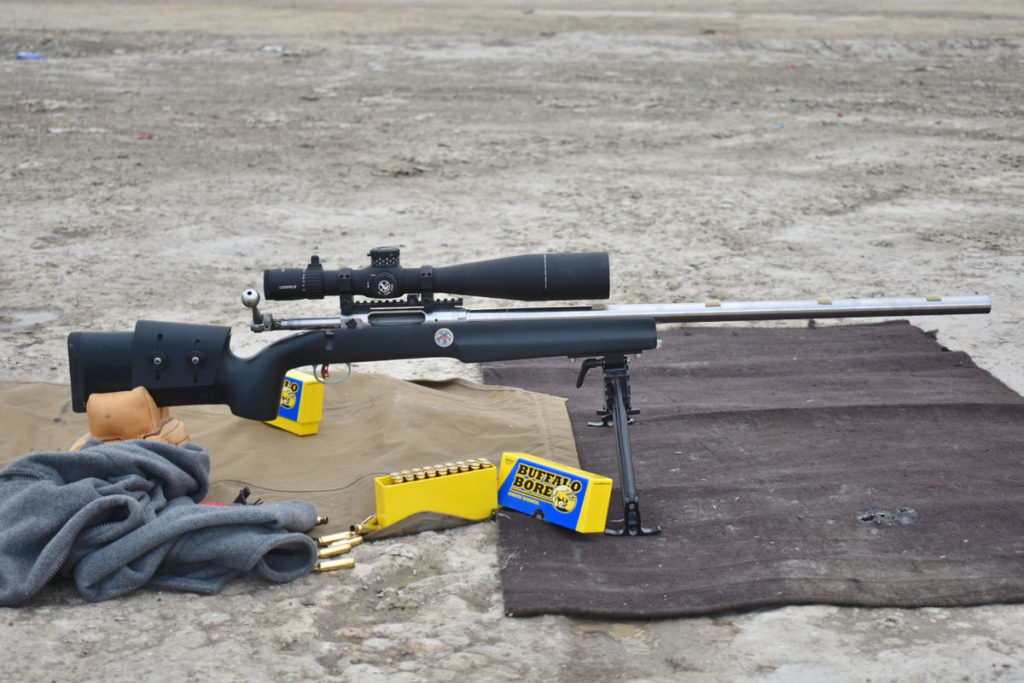 The Mark 5HD is a very large scope, but it does not weigh what you would expect. With its 35mm main tube and 56mm objective lens, it is no surprise that it is also boasting a 5x-25x magnification range. However, this optic is only 30 ounces!

Interesting features of the Mark 5HD

Other than having all of the aesthetics that most high-end riflescopes have, the first thing that a person will notice upon inspection is how deceivingly light the Mark 5HD is. The 5-25×56 model which I tested comes in at 30 ounces; around 20 ounces lighter than most other optics in its power range and clarity. Because of the high level of clarity across the Mark 5HD’s power range coupled with the low weight that it can boast, this riflescope is suitable for all sorts of applications from tactical to hunting. This optic allows a person to drop some desired weight from a dedicated long range rifle build which is important for a rig that will be toted around for any distance.

The next feature that is impressive may be overlooked unless the manual is read. Because of the 35mm main tube, the Mark 5HD has 120 MOA of internal adjustment available. Because of this large amount of adjustment available, there is potential to need to rotate the turret 2-3 times. Besides the firm zero stop which will keep a shooter from losing the zero, there are rotation indications on the turret itself. On the first rotation, nothing changes. The release button then goes flush on the second rotation, followed by a pin raising up and the release button recessing within the turret on the third rotation. The elevation turret also has the ability to be dialed below zero 1.25 MOA once the zero lock is released. This comes in handy if a person had a 200-yard zero and needs to adjust back to a 100 yard zero. 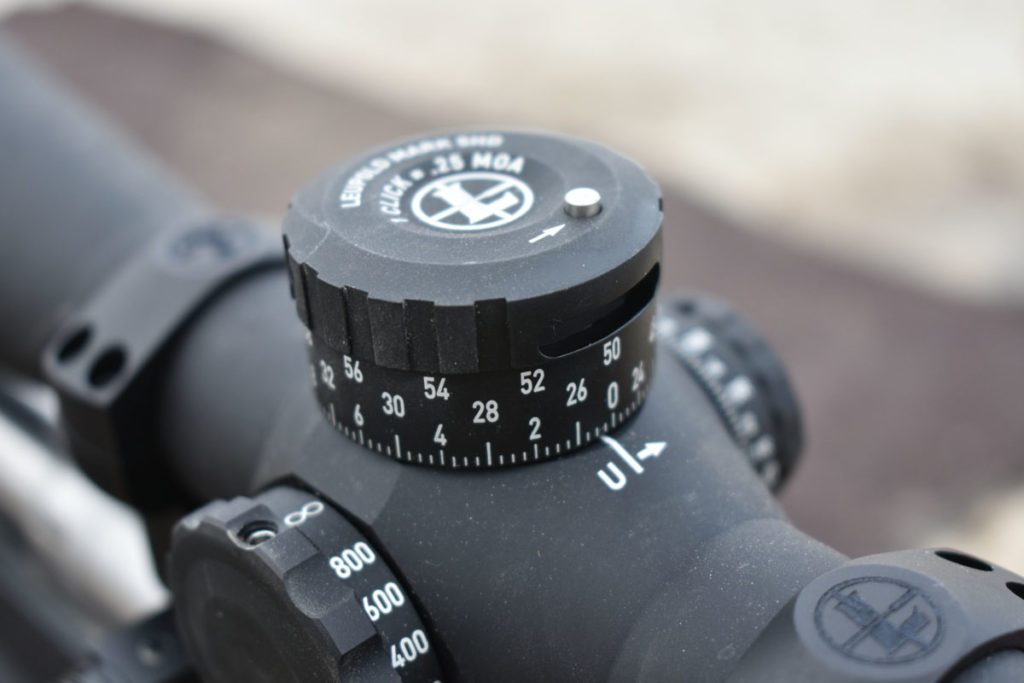 Here, you can observe the elevation turret dialed 3 revolutions as apparent due to the rotation indicators.

Another neat feature that I found is that the windage turret cannot be dialed a full revolution once set. This keeps a shooter from losing his zero because he forgot which direction he dialed. Instead, it allows 12 MOA in the left and right direction. In order to adjust it more than this, it is required to reset the turret using a wrench and then dial again. 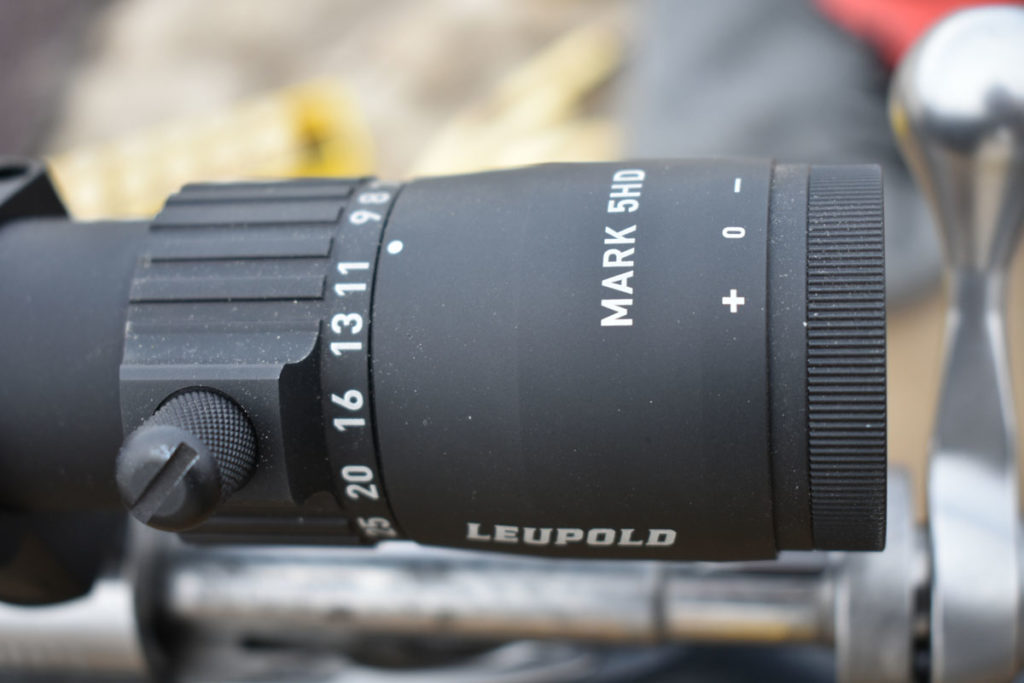 The Mark 5HD is packed with many features now common to high-end optics. Seen here is the removable magnification throw lever. Also seen is the adjustable fast focus eyepiece.

As standard with the Mark 5HD line, the reticle is on the first focal plane. This is a feature that typically adds hundreds to the cost of any scope product line because of the extra complexity in manufacturing. Besides being in the first focal plane, the reticle in the MOA version that I had, the PR-1, is very user-friendly. It has hash marks spaced every 1 MOA and has numerical designations every 10 MOA. I found the 1 MOA marks to be very useful in sighting in my gun, ranging targets and making shooting corrections accurately. The other feature that I enjoyed about this reticle was the floating dot in the center which is used as the point of aim. I find that optics with this feature are very easy to aim precisely because the reticle is blocking a minimal amount of the shooter’s view of the target. However, the Mark 5HD will be available with three different reticles options including an illuminated PR-1 version.

The new offering of reticles from Leupold available in the Mark 5HD line includes these three. The optic that I had the pleasure of using was equipped with the non-illuminated PR-1 reticle.

One thing I like about Leupold optics is the fact that when you buy a Leupold, you can be sure that it is American made and has high optical clarity needed for any task. The Mark 5HD is just the same in this way. The large main tube diameter allows for a ridiculously large amount of elevation and windage adjustment that can be made on the turrets. The glass that is incorporated is coated with the most advanced coatings to aid in desired light transmission which is apparent during the early morning and evenings. Also, the large 56mm objective lens further adds to light gathering ability which brings a clear image to the shooter’s eye even in the worst weather conditions or dark hours. All of this and it is still backed with Leupold’s lifetime guarantee to put any worries of bumps and scrapes at ease.

Like in all of the optics that I get the opportunity to review, I put the Mark 5HD through a tall target test in order to see what kind of accuracy the turrets tracked with. In this test, I draw up a target on some gridded paper (1” grid) which consists of an aim point at the bottom with a vertical line running in the Y-axis and a horizontal line running in the X-axis. These lines illustrate visually if the elevation and windage turrets track in purely the Y and X axis respectively after the target and scope have been leveled with gravity or a bubble level. In this test, it is imperative that the rifle used can put groups down range with the utmost precision in order to yield results that are as accurate as possible. For this purpose, I used my Savage target rifle with criterion barrel chambered in 308 Winchester. For Ammunition, I used Buffalo Bore Sniper 308 Win, slinging a 175-grain SMK. 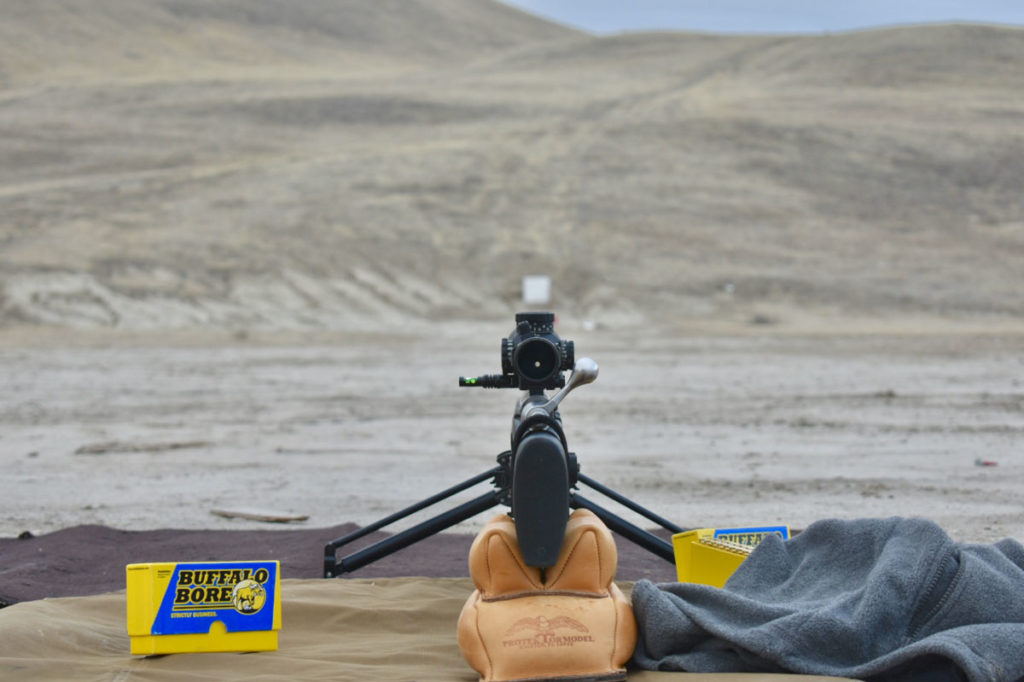 Set up and ready to start the tall target test with my custom rifle shooting Buffalo Bore Ammunition Sniper 308 Win ammo. It is important that set up in this test is precise.

The first thing that I do when I get to the range to perform this test is to drop off my target downrange, leveled with gravity or a bubble level.  Next, after setting up my rifle and making sure to pay attention to the bubble level on the scope, I fire a three round group at my point of aim. At this point, it does not matter if the rifle is perfectly zeroed because the three round group that is on paper is now the point of reference to do all of the measurings from. Next, I dial up 30 MOA (an arbitrary number) and again fired a three round group at my initial point of aim. Downrange, I should see a three round group perfectly in line on the Y-axis from the initial group fired and this new group should be 30 MOA above it as well. And to wrap it up, I dial the elevation turret back to zero and move the windage over another arbitrary amount (this time it was 14 MOA to the left) and again fire another three round group at the initial point of aim. This group should land on the X-axis 14 MOA to the left of the reference group. At that, the shooting is done and some calculating needs to be performed.

The formula that is used to draw my conclusions from this test is as follows:

After measuring the distance between the reference group and test group on the X and Y axis, I found the distances to be 14.8125” and 31.75” respectively. Using the equation, I found that I should expect the distance of travel at 101 yards (confirmed with 2 different rangefinders) to be 31.724” which means that the elevation turret tracked with 99.92% accuracy in my test! Given the number of variables that I cannot control, this is outstanding performance shown by the Leupold Mark 5 HD.

Using the same equation, I calculated the expected distance between the reference group and test group on the X axis to be 14.805”. Given that the experimental distance is 14.8125”, this means that the windage turret tracked with 99.94% accuracy in my test. Again, another impressive result from the Mark 5HD. 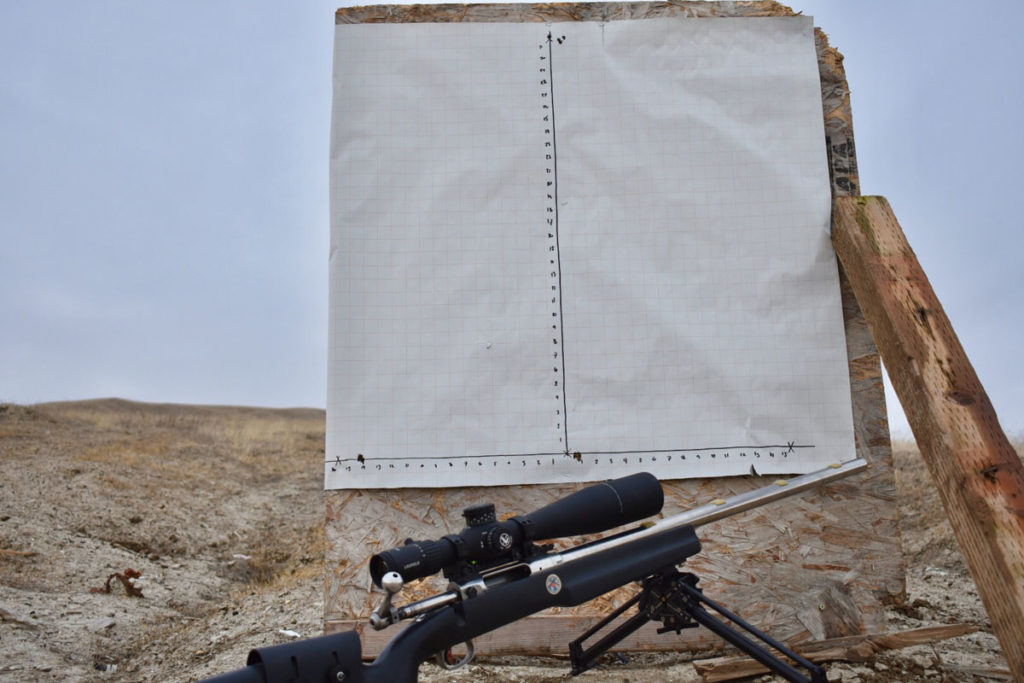 Results from the tall target test. Of the three separate groups on the target, I felt confident in all shots save one. After I pulled a shot on the group on the upper end of the Y axis, I decided to fire a 4th round which confirmed my mistake. This shot was not counted in the results. All groups measured around ¼” with this single flyer discarded.

Leupold has done something right with the design of the Mark 5HD line of riflescopes and managed to answer most of my wants. This makes for a very short list of complaints from myself. The only thing that I want to mention here as something I did not like, is that the windage index mark (the line on the scope body) is rather thick compared to the index lines on the turret itself. Also, Leupold chose to place this index mark at the 11 ‘o clock position which is supposed to aid in the ability to see the windage adjustment while still on the gun, but because it isn’t perpendicular to the windage turret it is rather hard to tell what it is pointing to. Because of this, I found myself relying on counting clicks to make adjustments and return to zero rather than using the mark as intended and dialing straight back to the visual zero. Again, this was the only problem I had with the windage adjustments. Being the first gripe on my list, this is also the last. 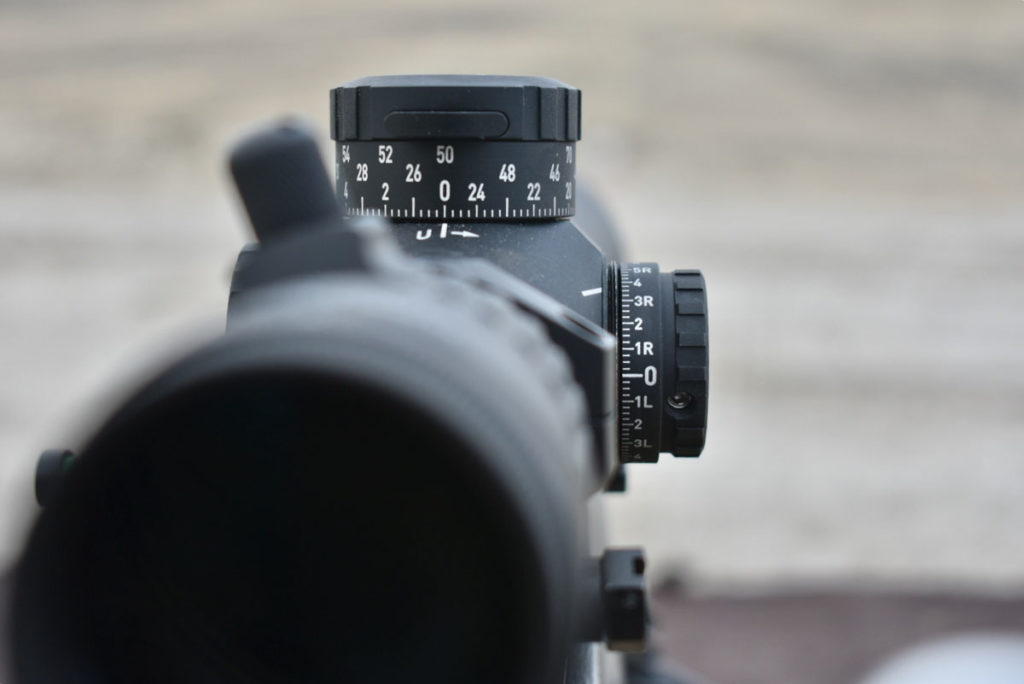 As can be seen, it is a bit difficult to tell what mark the windage index mark is actually on. However, with the ability to count clicks or use holdovers in the reticle, this is a small issue.

In the end, I was left very pleased with basically everything about the Leupold Mark 5HD 5-25×56 that I was able to run through its paces. As mentioned, the optical clarity is stellar. This optic would compete with any other optics in and above its price point as far as clarity goes. Also, the Mark 5HD is packed with tons of useful features like the locking turrets, rotation indicators, magnification throw lever and side parallax adjustment. Because of it being packed with features, it can be used for basically any application from hunting, bench shooting, and tactical applications. This optic is lighter than anyone could expect which further adds to its value in the field. It is manufactured and assembled in America, so wait times that other optics factories are known for are minimal between production runs. And of course, now it is available in my favorite unit of measurement; MOA. 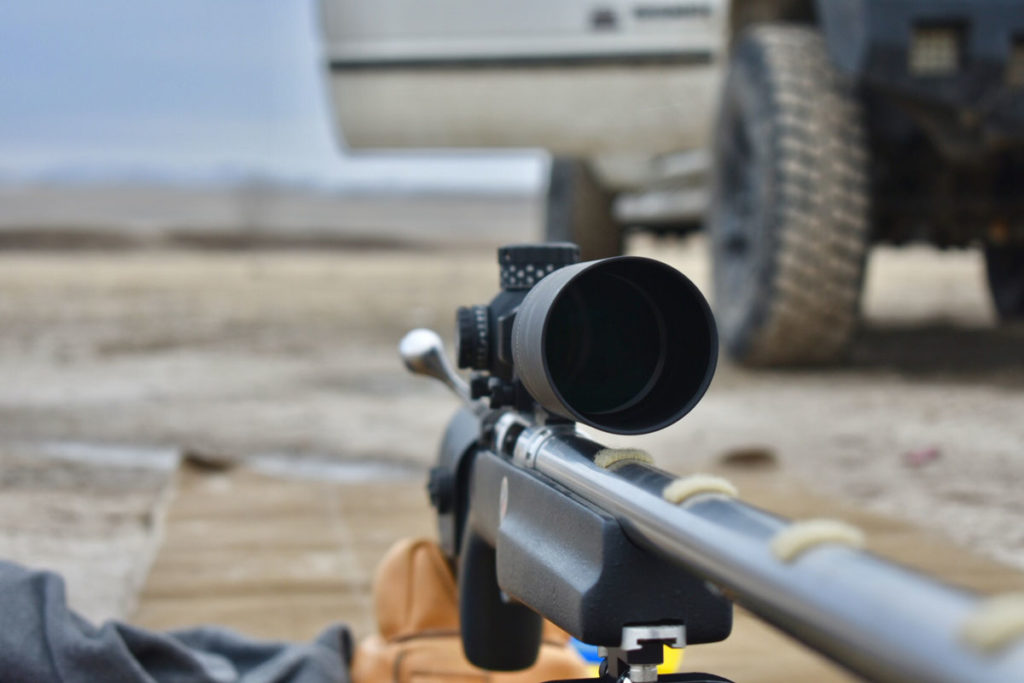 The Mark 5HD looks at home on any rifle.