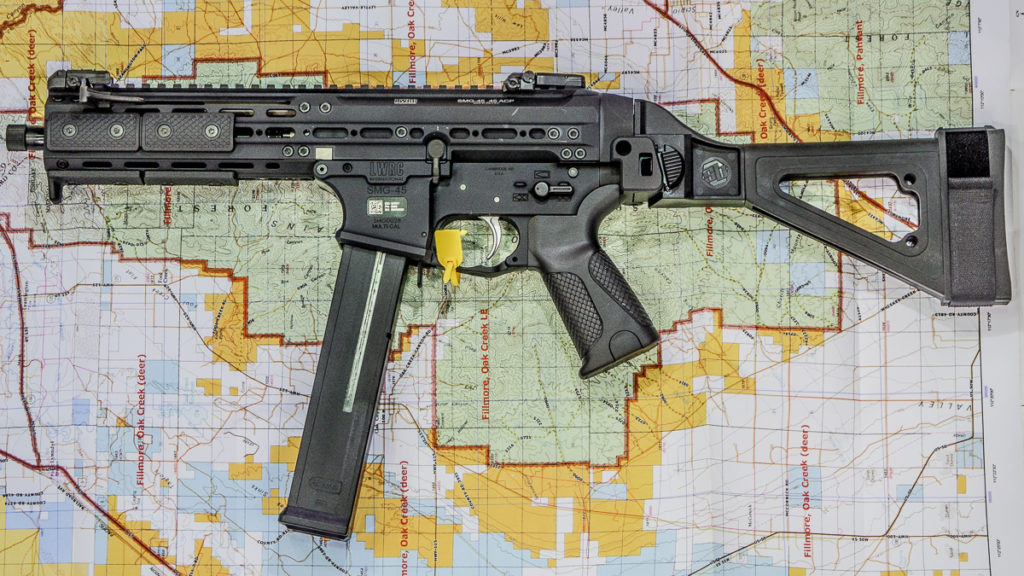 LWRCI’s submachine gun is finally ready for the public and looks like it may have been worth the wait. This is LWRCI’s first pistol caliber carbine. It takes .45 ACP cartridges and uses HK’s UMP magazines. It’s all made in the USA in Cambridge, Maryland, and the HK mags aren’t the only parts you’ll recognize. 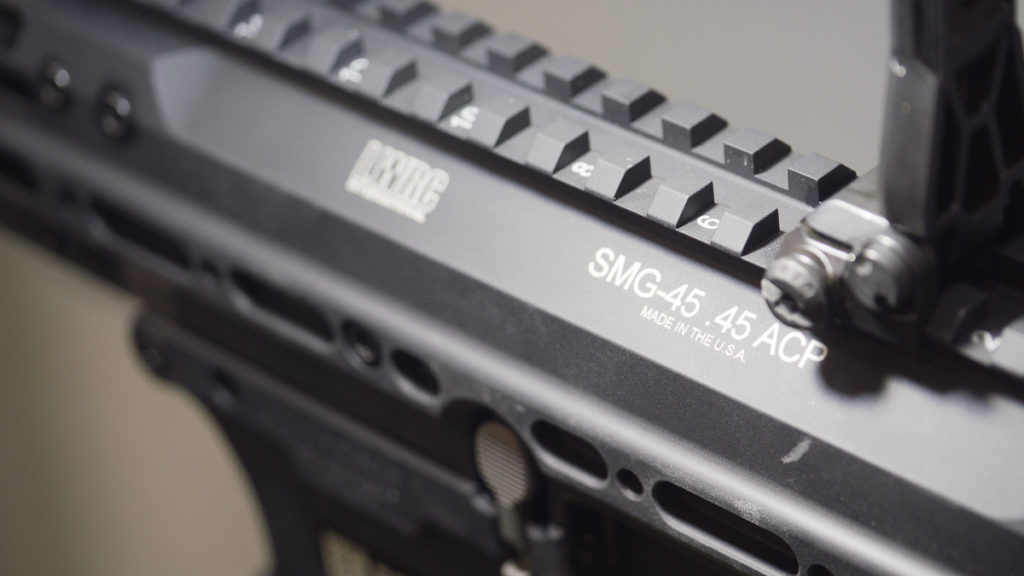 It’s made in Cambridge, Maryland, and even the UMP mags are made in the USA.

The SMG .45 uses a standard AR-15 fire control group. this is great because you can customize it however you like, but it’s set up pretty well out of the box. 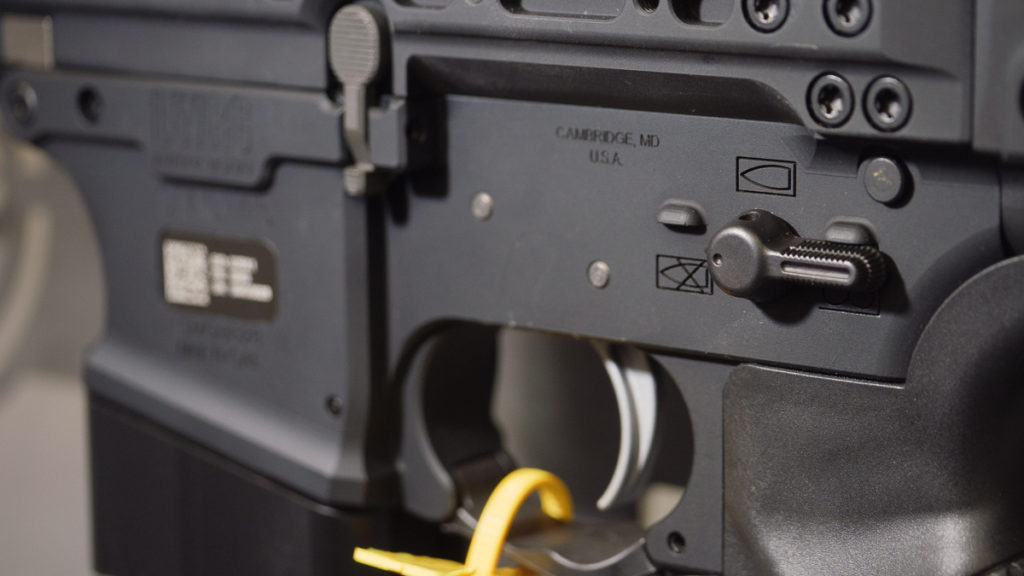 It’s built on an AR-15 platform and uses a standard fire control group. 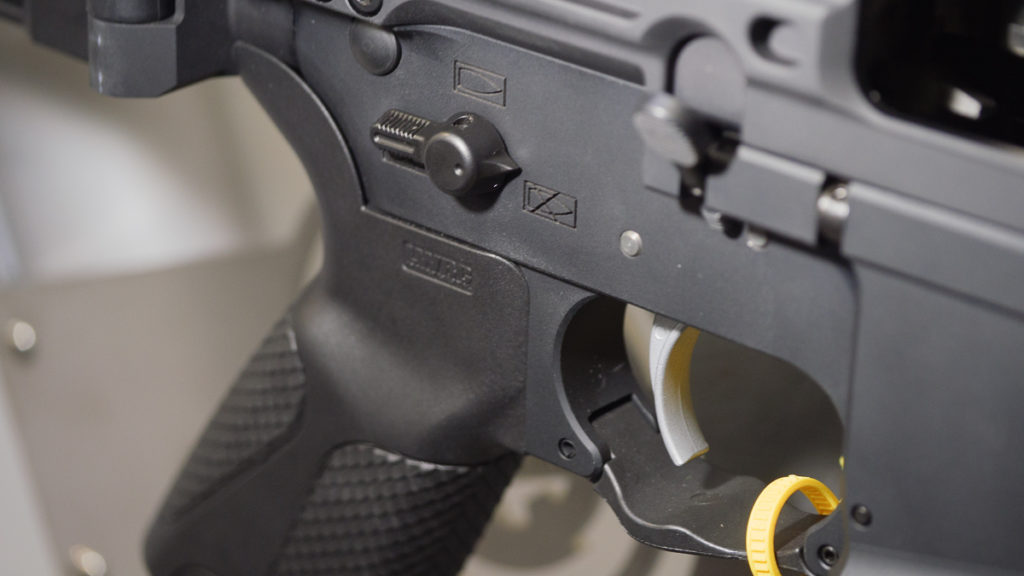 The safety switch functions from both sides, as does the bolt release.

It’s ready for ambidextrous users. The paddle mag release is in front of the trigger and behind the mag well. The forward-mounted charging handle is non-reciprocating and can be positioned on either side. There are bolt releases on both sides, and safety selector switches on both sides (it’s ready for full-auto). 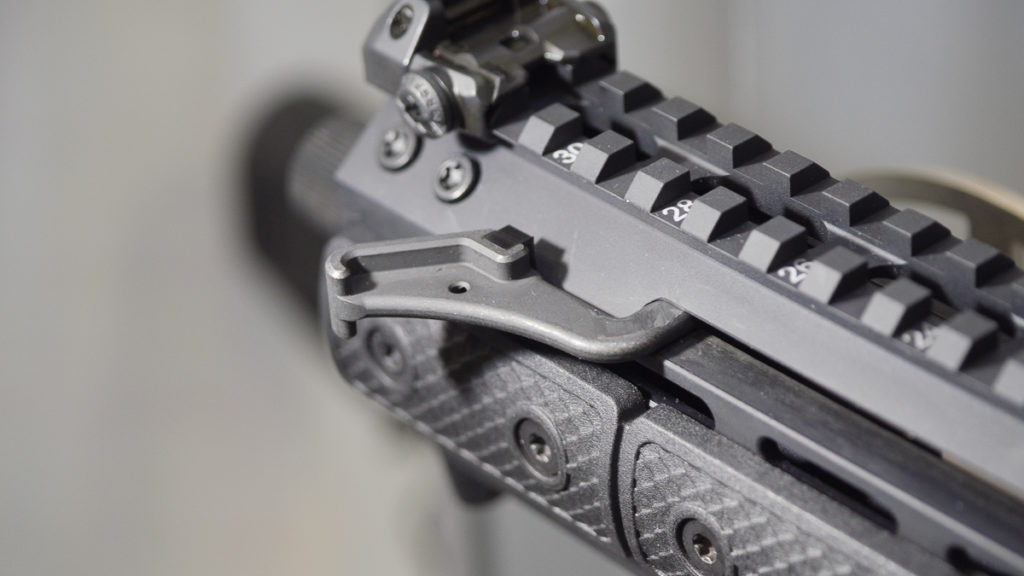 The charging handle is nonreciprocating and can be relocated to the right side.

The action is delayed blowback/short recoil, which helps mitigate recoil. The trigger is between five and eight pounds and you can drop in any AR-15 trigger you like. 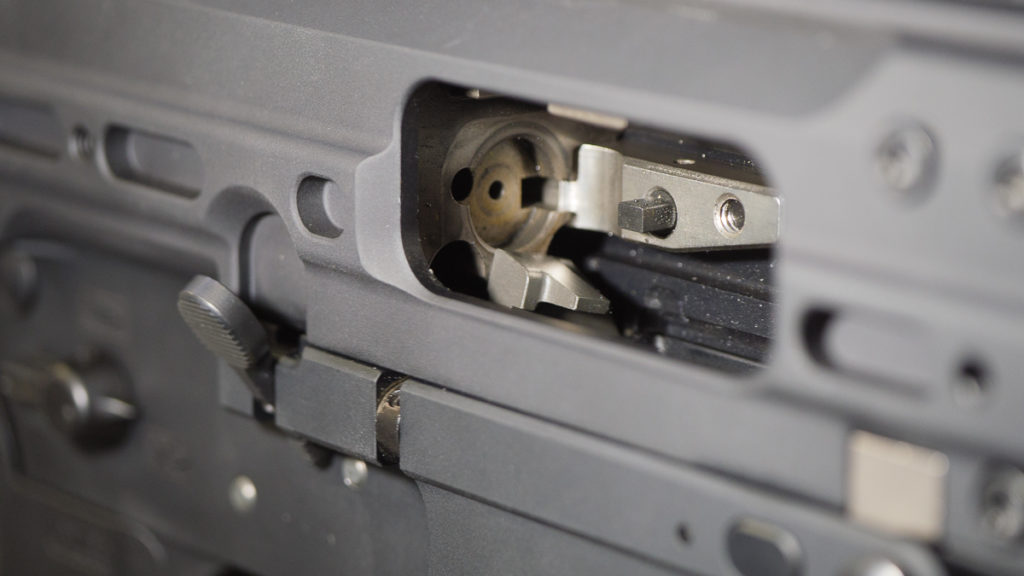 The action is delayed blowback/short recoil. 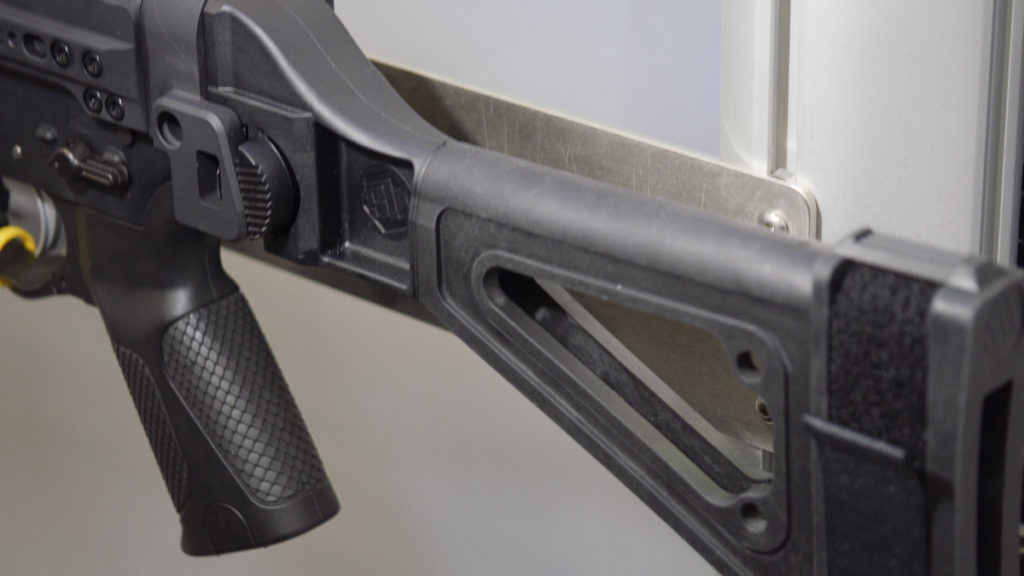 SB Tactical’s folding pistol brace is standard, though an SBR version is coming, as well as an adapted for an AR buffer tube stock.

It’s got LWRCI’s proprietary accessory system on the handguard and a full-length Picatinny rail on top. There are many accessories already out there. It ships with Magpul’s MBUS front and rear sights. The barrel is threaded, ready for .45 ACP suppressors; you’re going to need a Neilsen device (suppressor booster) to ensure it cycles properly with a suppressor attached. 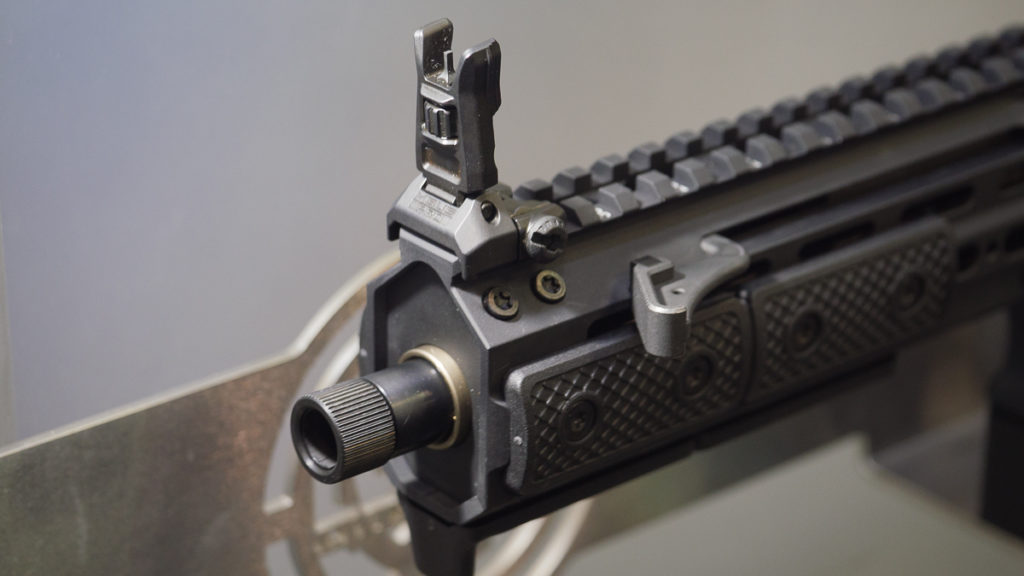 It’s threaded for a .45 suppressor and has LWRCI’s proprietary accessory rails with Picatinny on top. 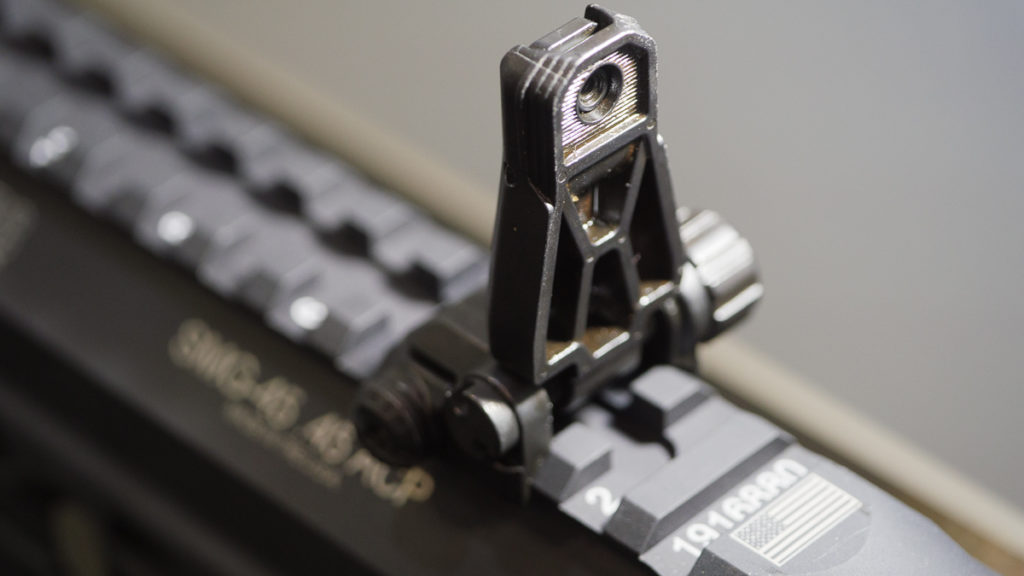 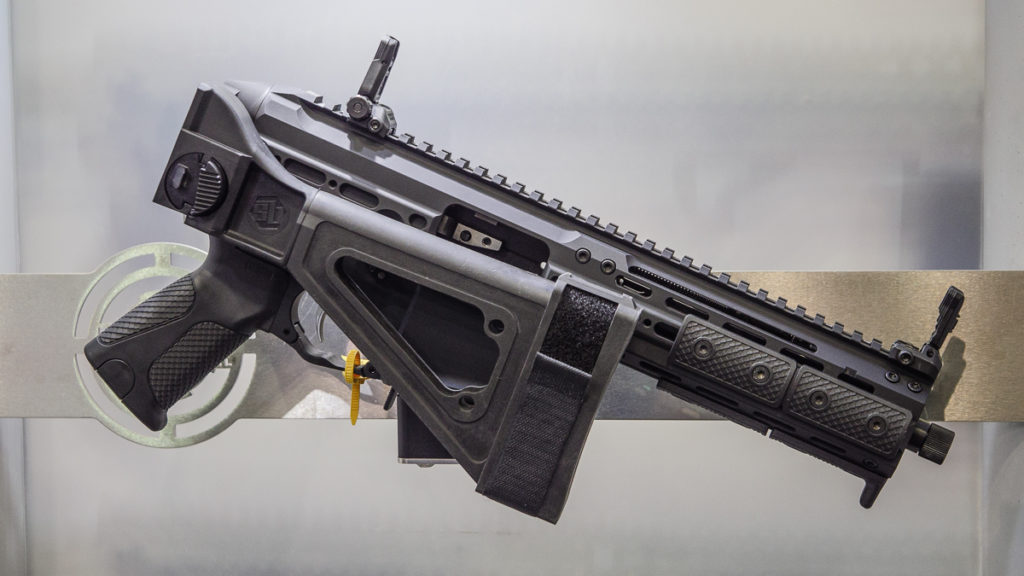 I spoke for some time with the product engineer. When I asked him what his favorite thing about this gun is, he said it’s just plain fun to shoot and it’s lighthearted. It handles extremely well. He says that the balance has a lot to do with that, and he demonstrated that it’s perfectly balanced over the magazine and even stood the gun on its mag. I love it when the guys making the guns are having a good time doing it–you can be sure it’s going to be a fine firearm. Keep an eye on LWRCI’s submachine gun for the release date. 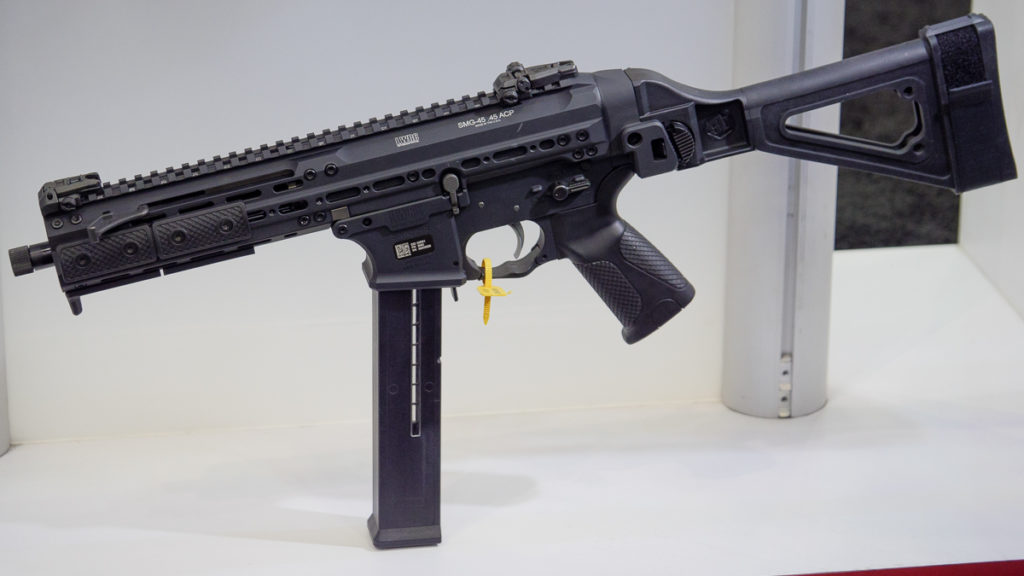 It’s so well-balanced you can stand it on its magazine.