Browning’s M1911 and the Tale of a U.S. Combat Engineer in Italy

Author’s note—This article is part of an ongoing series on Allied small arms of World War 2. In each installment, we will endeavor to explore the humanity behind the firearms with which Allied combatants defeated the Axis powers. General George Patton once opined, “Wars may be fought with weapons, but they are won by men.” In this series, we will investigate both the guns and the men behind them in the context of the planet’s bloodiest conflict. 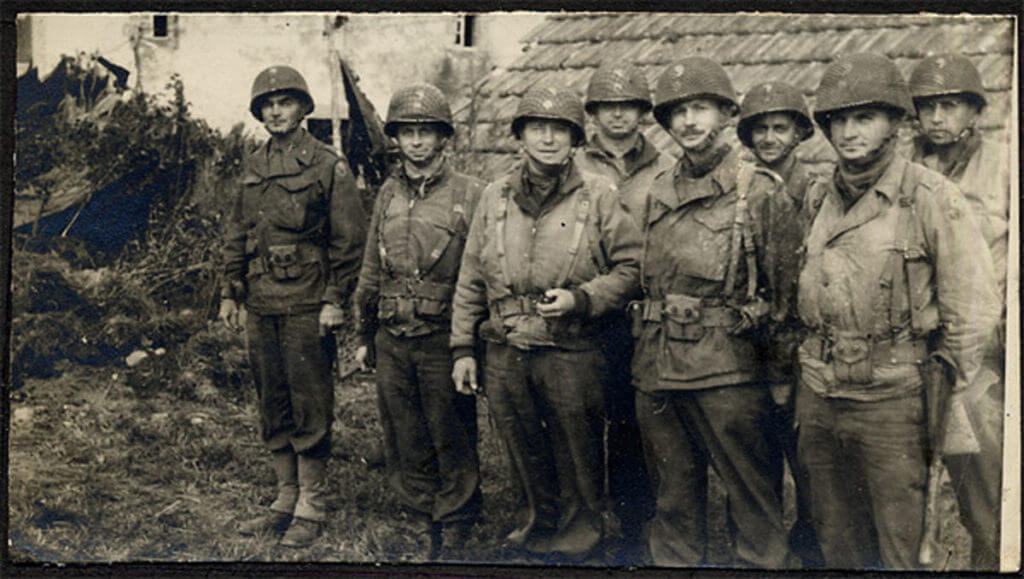 The 1911A1 pistol armed generations of American GIs as they marched off to defend democracy against those who wished to snuff it. We stand on the shoulders of giants and do so frequently take our freedoms for granted.

The man was nineteen years old when he blackened his face with soot from a wood stove and crept to within scant yards of a fortified German position under cover of darkness. During the course of the next several hours, he emplaced a minefield within earshot of dozens of Wehrmacht soldiers. He could clearly hear them laughing and talking as he methodically armed his devices and then retreated back to his own lines. His job as a Combat Engineer carried with it all the risks of the Infantry along with the responsibility to emplace and clear minefields. He earned a Silver Star for his actions that night. 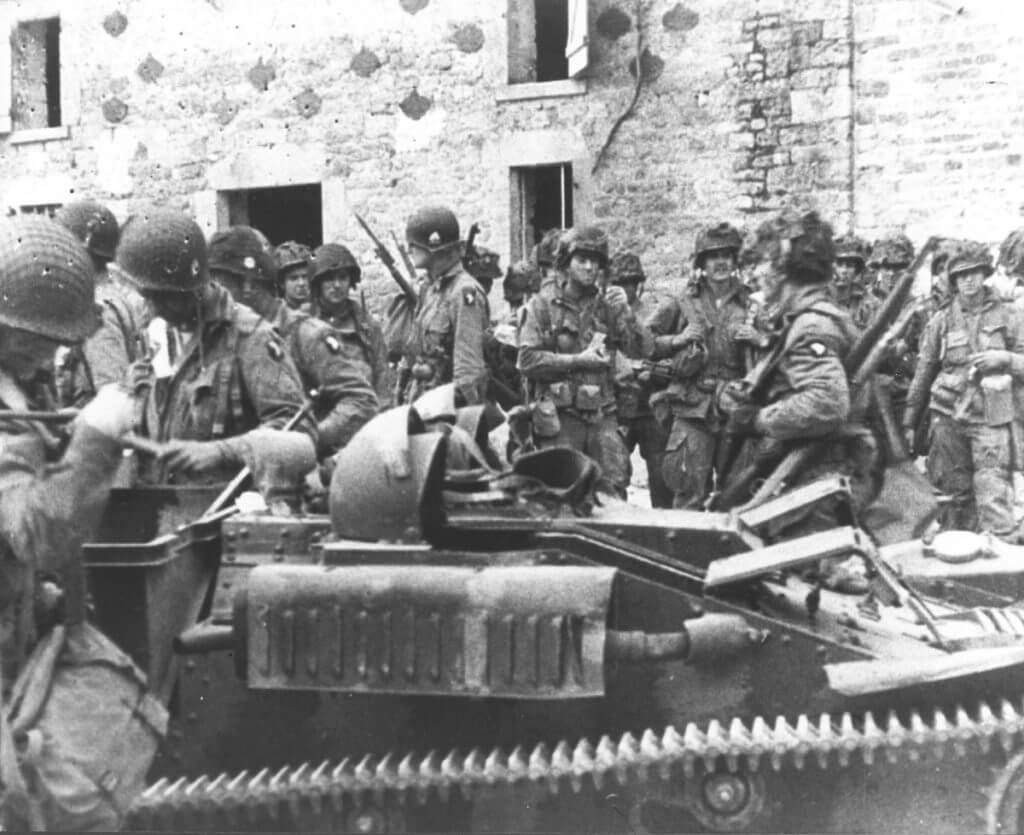 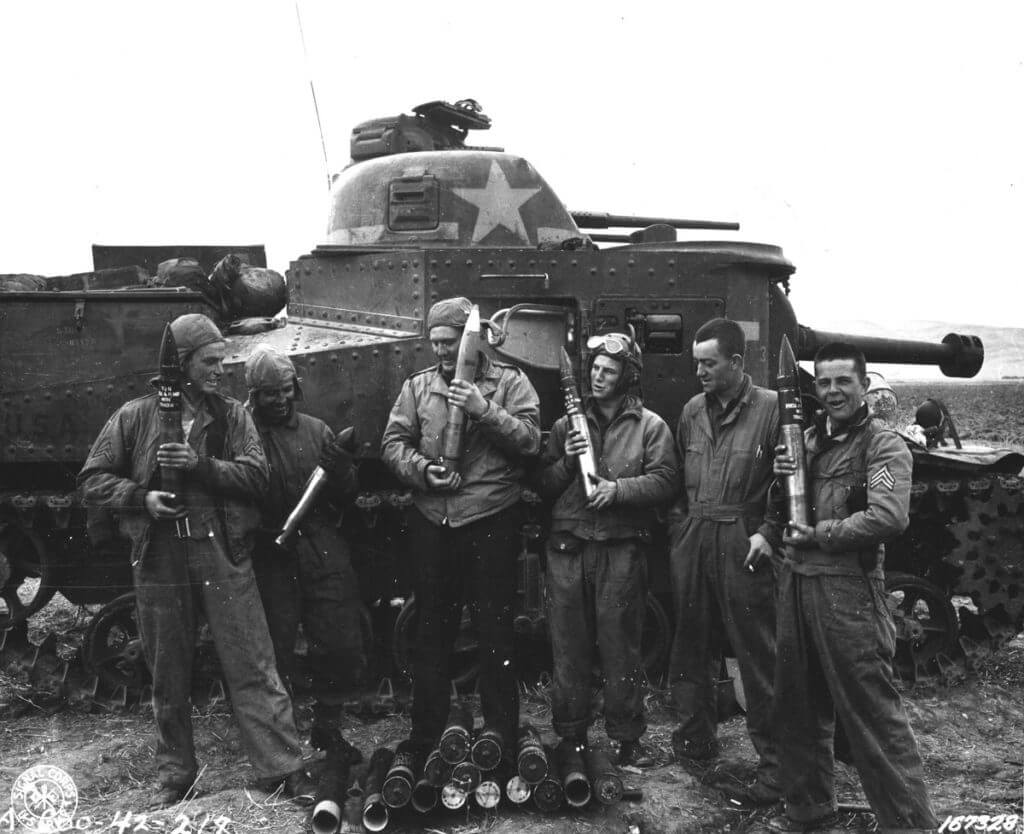 The man and his buddies once cleared a German minefield and ended up with a small mountain of disarmed Teller mines stacked up on a secluded Italian beach. A sensible man might have blown the mines a few at a time. However, these were not sensible men. These were American teenagers. They rigged a few blocks of TNT with a generous time fuse and placed it in the stack before retreating behind an ample dune.

The resulting explosion left a crater that could be mistaken for a small harbor and blew out every window in the nearby Italian village. The force of the blast lifted him bodily off the ground as he cowered behind his little hill. He and his mates emerged, ears ringing and sinuses cleared, to laugh about the chaos they had just unleashed.

There is an immutable pathos to be found in the fact that most soldiers are really just glorified children. I know I was. What is wrong with us as a species?

The man had never before been outside Mississippi, so he was curious about Italy and the detritus of war. One afternoon after his duties were complete he struck off alone into a nearby bombed-out village simply to explore. This was a world at war so he carried along his Colt 1911A1 pistol. In a combat zone, a man’s weapon is his constant companion. It is equal part tool and talisman, but one is never without it.

The man wandered into a massive pile of rubble that had once been a large building. In the dim light, he was fascinated with the little-broken things that defined lives once vibrant though now destroyed. Stepping through a wrecked doorway he found himself unexpectedly face to face with his German counterpart.

This other young man was likely on a similar mission, just wandering to satisfy curiosity or assuage boredom. Regardless of the impetus, fate was destined to be exceptionally cruel this day. The young German soldier carried a bolt action Kar98k rifle and was comparably alone.

Both men stared dumbstruck at each other for a pregnant moment, close enough to see the other breathe. Reflexively they scrambled for their weapons, but my buddy was faster. A single .45ACP round to the chest dropped the young German where he stood.

Practical killing is seldom like the movies. The process typically takes a while, and this was no exception. To have been both participant and witness at such close quarters changed this man forever.

This gentleman was not a professional warrior or some highly trained Specops killer. When I knew him he worked in a bank. He was background clutter in the world’s most vibrant democracy. He and his friends were citizen soldiers who abandoned their lives to ensure the blessings of liberty for their fellow Americans for generations to come. They were heroes in every sense. More than 400,000 of them never came home. How can we ever live up to that? 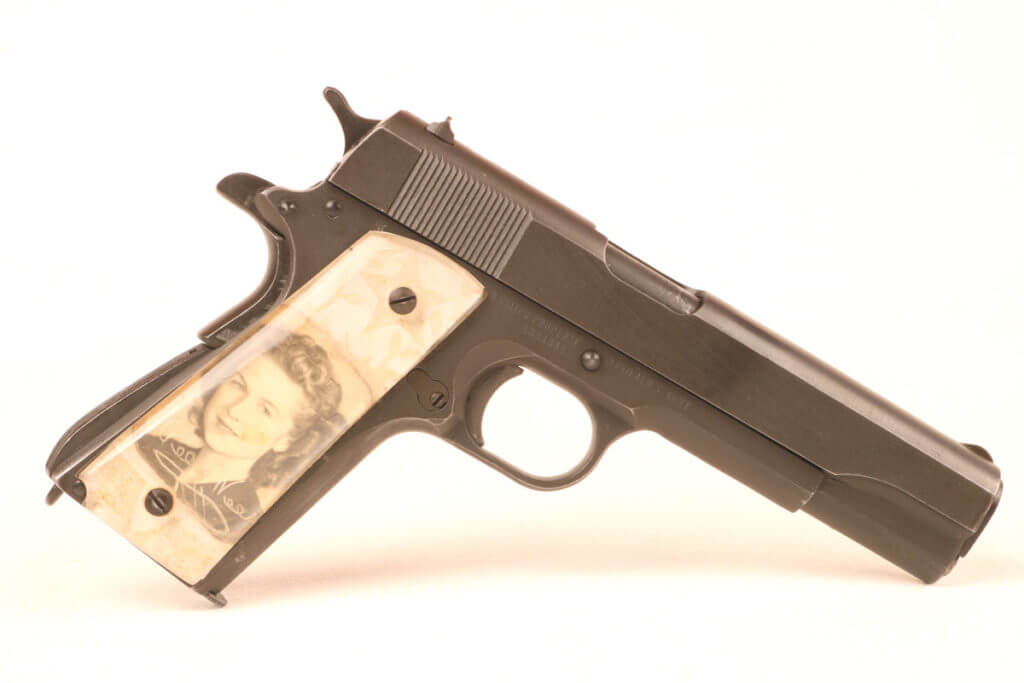 The 1911A1 pistol armed generations of American fighting men. Powerful, reliable, and mean, the 1911 is a fistful of Americana.

In the late 1800’s the US military was burning through prototype firearms at an unprecedented rate. Small arms technology was outpacing both tactics and procurement, so government arms rooms housed a uniquely variegated selection. In a single decade, the military cycled through the M19892/96/98 Krag rifles as well as the M1895 Navy Lee. Revolvers from Smith and Wesson as well as Colt filled GI holsters. The Colt M1892 fired the .38 Long Colt cartridge. 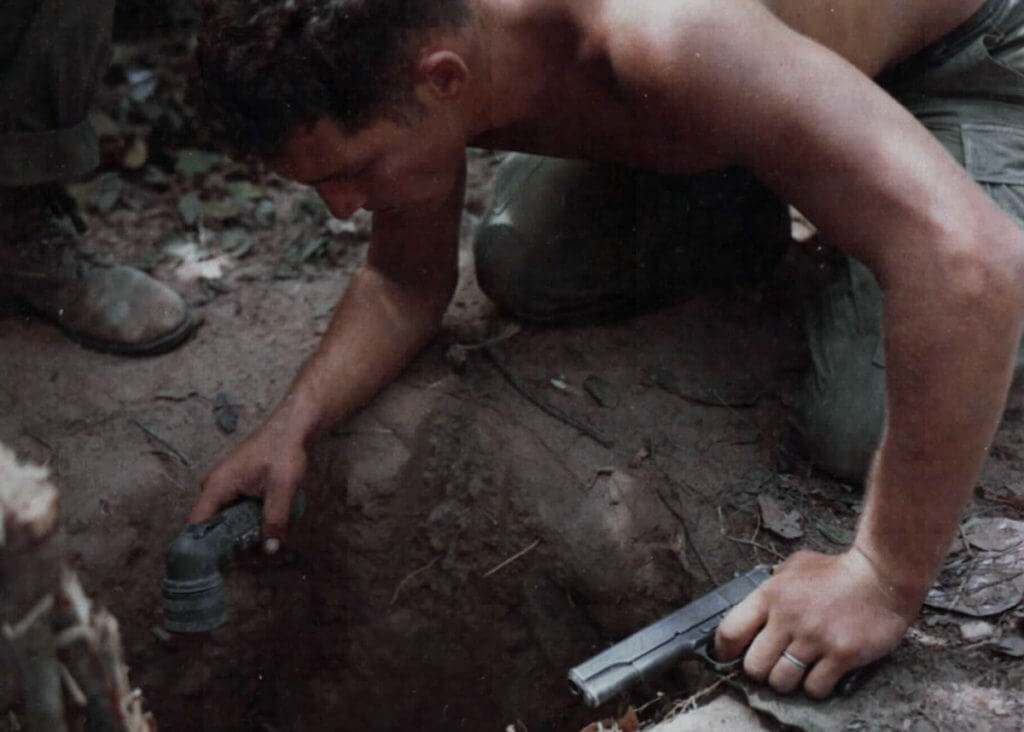 The 1911 handgun soldiered on until the late 1980’s. Here we see Sergeant Ronald Payne wielding his 1911A1 as he explores a tunnel complex in Vietnam in 1967. I quite literally cannot imagine the kind of courage required to undertake such a thing.

The war went by several names. It was variously called the Filipino-American War, the Philippine War, or the Tagalog Insurgency. Regardless, this short but bloody conflict served as our rude introduction to the fine art of Islamic Jihad. Muslim Moro tribesmen were known to lash wet leather thongs around their testicles that shrank as they dried, working them into a justifiable frenzy. The .38 revolvers of the day simply weren’t up to the task. 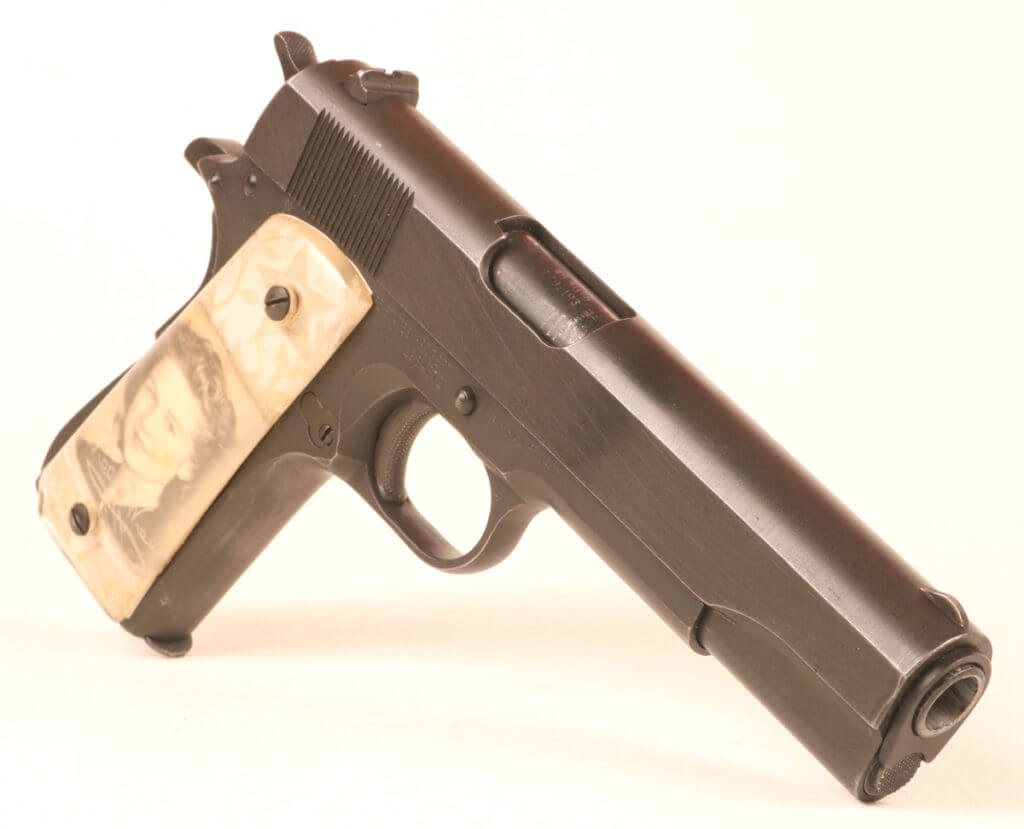 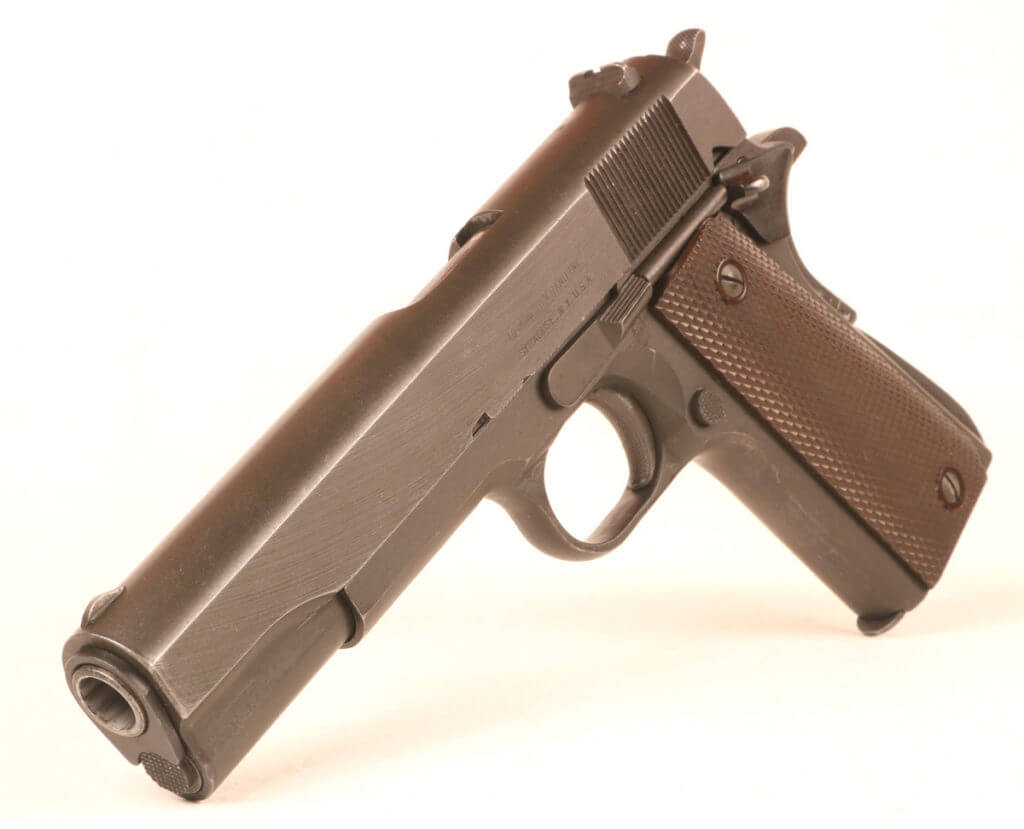 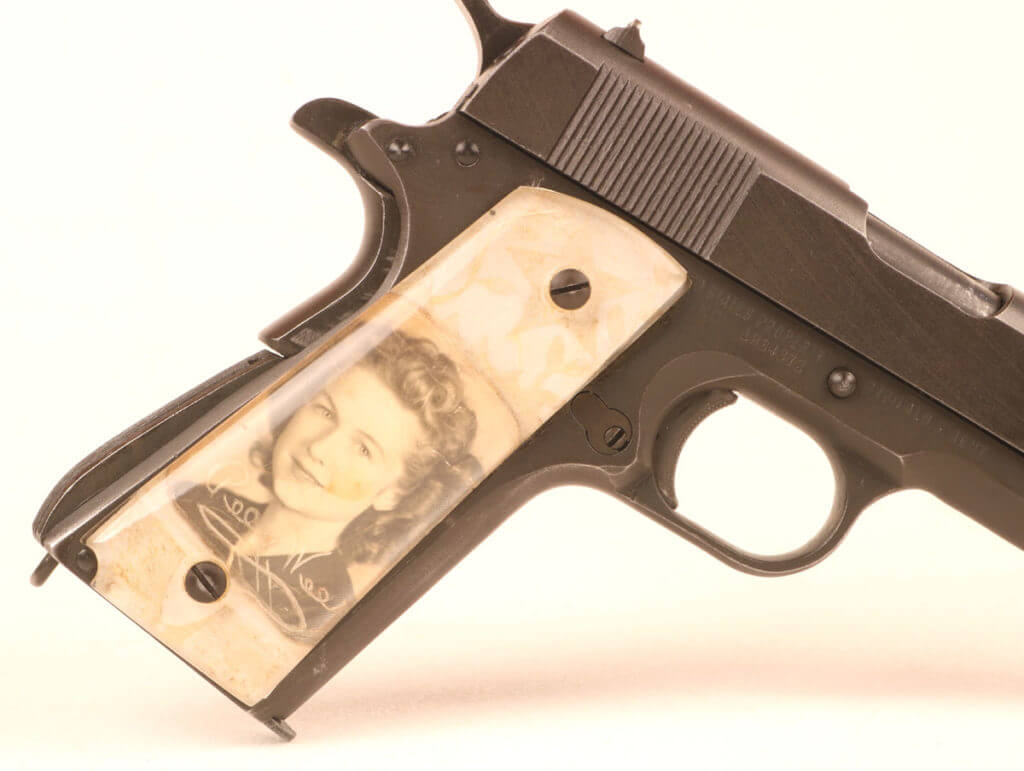 My most prized worldly possession. My wife’s grandfather carried a 1911A1 pistol throughout World War II that bore this handmade sweetheart grip. After his death, last year at age 96 custody of this priceless artifact fell to me.

John Moses Browning was the most gifted firearms designer in human history. He held 128 patents by the time he keeled over of heart failure at his workbench in 1926 at the FN factory in Liege, Belgium. When he built the US government’s new combat handgun and the cartridge it fired he took no chances.

The European standard at the time pushed a 9mm bullet that weighed 115 grains. Old John Moses just doubled that to create the .45ACP that set the standard for man-portable stopping power more than a century later. The recoil-operated semiautomatic handgun that fired it went on to inspire fully 95% of the modern combat pistol designs available today.

We came surprisingly close to adopting a DWM Luger pistol chambered in .45ACP as an American service handgun. These original .45ACP Lugers submitted for the pistol trials in 1906 are arguably the most collectible military firearms in the world. They are quite literally priceless today. Should you trip over one in grandpa’s attic please give me a call. Maybe we can work a deal.

DWM ultimately dropped out of the competition leaving only Savage and Colt. Over the course of a two-day period, a single sample of each fired 6,000 rounds. The guns were simply dunked in water when they grew too hot to handle. At the end of the process, the Savage gun had suffered 37 failures. Browning’s 1911 had none.

The design was tweaked in 1924 into the 1911A1, and this was the gun my friend carried in Italy. I was issued one myself back when I first donned a US Army uniform of my own. When American GIs of both genders are finally packing phased plasma rifles for their forays downrange, old geezers like me will still be looking with longing admiration at the classic manly lines of John Browning’s martial masterpiece. 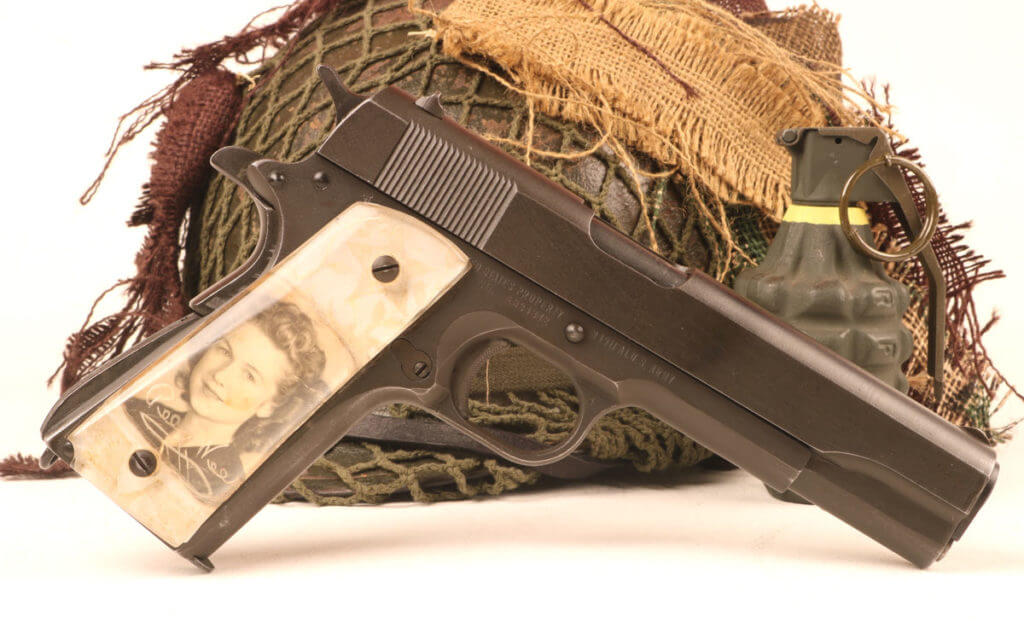 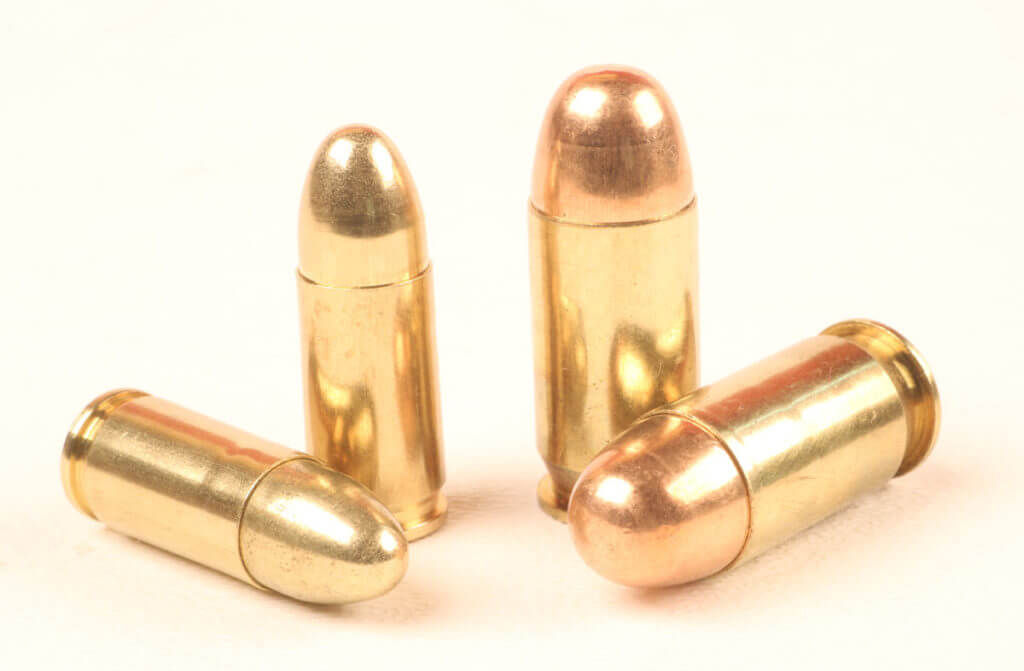 When John Moses Browning needed to build a new cartridge he simply took the 9mm Parabellum (left) and doubled it. The resulting finger-sized round sets the standard for stopping power even today.

In its original GI guise, the 1911A1 is indeed a handful. Recoil is not insubstantial, and there are only seven rounds in the magazine. Additionally, before we started lowering and flaring all of our ejection ports the thing was notorious for dropping empties onto the top of your head.

That first 1911A1 I was issued rattled like a tambourine when you shook it, but it went off every single time you pulled the trigger. I’ve shot lots more accurate handguns, but ours had been through the rebuild process a time or three by the time they fell into our mitts in the late 1980’s. Those tired old pistols had been new when my pal earned his Silver Star in Italy.

The rounds are as big as my finger, and they punch nearly half-inch holes, even with pedestrian ball ammunition. When stoked with modern expanding ammo the downrange results are undeniably devastating. I once saw a guy who had been shot in the mouth with one of these things. The back of his head sported a hole that would accommodate a mature orange. It didn’t hurt long. 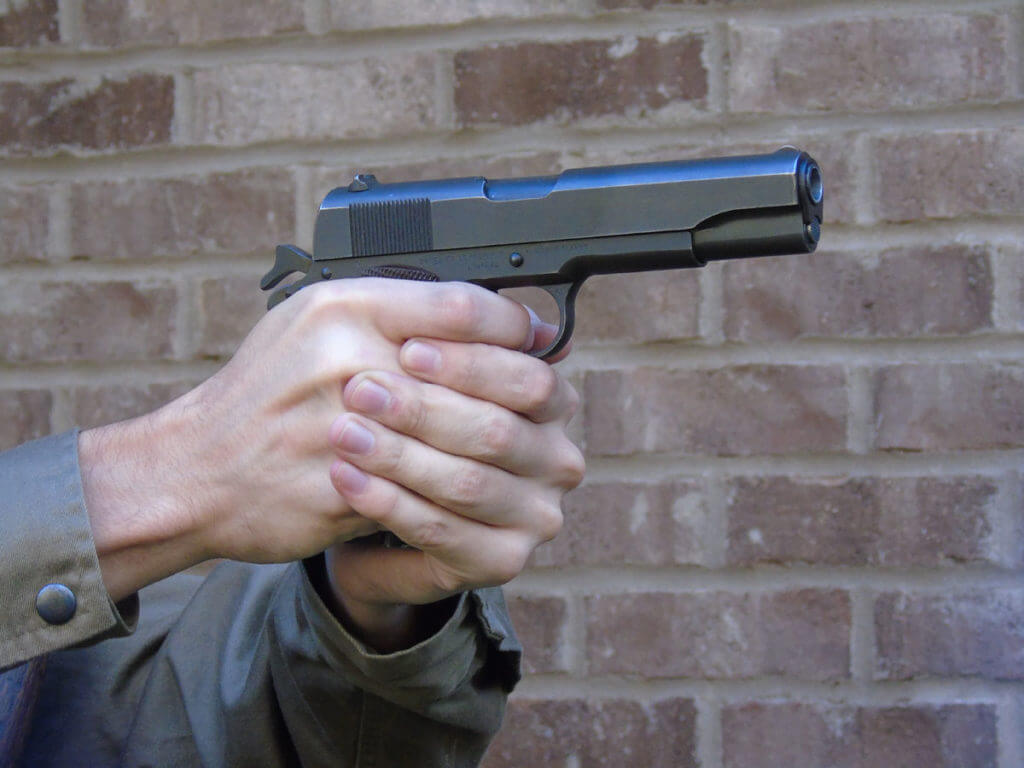 The 1911A1 is a handful in action. Recoil is not insubstantial, but the gun is unnaturally reliable. 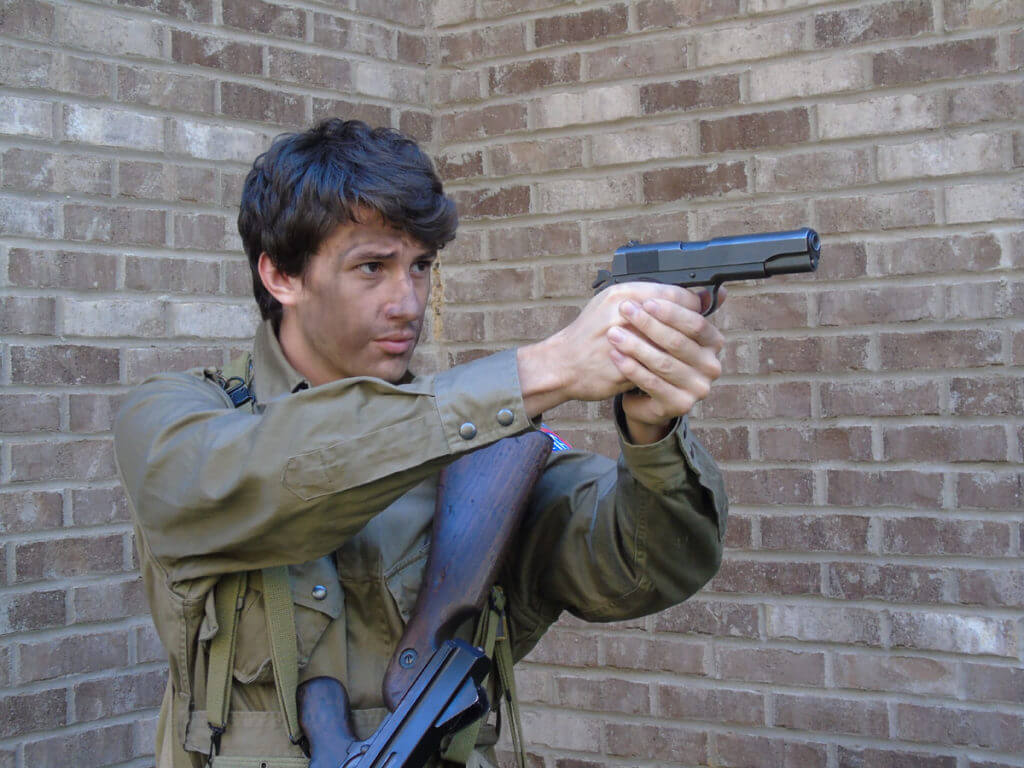 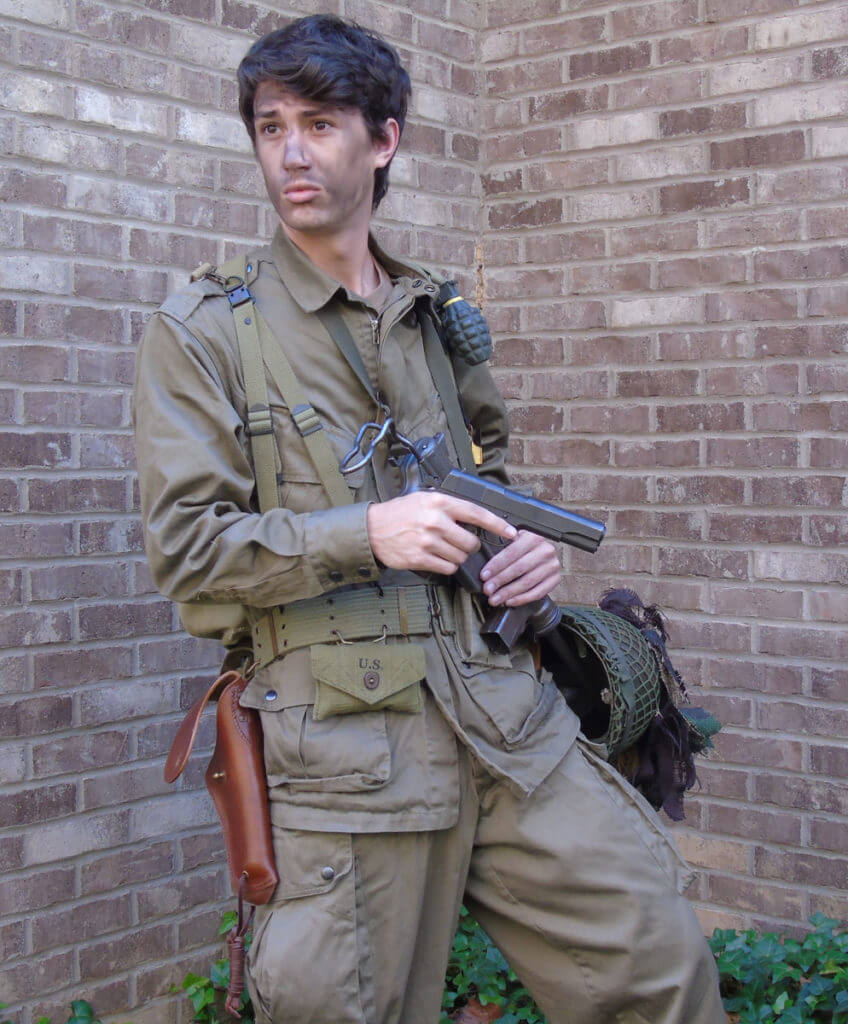 The 1911 pistol is as much a part of the fabric of America as is baseball, fast cars, and pretty girls. Literally, countless young men headed off into harm’s way with one of Mr. Browning’s hand cannons tucked into their belts. When life got extra sucky these guys knew they packed the best combat handgun on the planet.

War defines a man. It also defines a generation. Those old guys came home from the most expansive conflict in all of human history desperate to build and create. They had seen so much death and pain that all they wanted to do was make a world that was fresh, clean, and new. It was this spirit that built the United States into the most powerful and respected nation in all of human history. It remains to be seen if those of us who came of age later can prove ourselves worthy of this precious legacy.

Special thanks to www.worldwarsupply.com for the gear we used to outfit our period paratrooper.

Group size is the best four of five shots measured center to center at fourteen meters from a simple rest. Velocity is the average of three shots fired across a Caldwell Ballistic Chronograph oriented ten feet from the muzzle.